I have a Montmorency cherry from the Arbor Day Foundation (which was in absolutely terrible condition when it arrived, but that’s another topic) that has been halved in size, and had all the branches eaten off. I live in suburbia, and my main pests are bunnies and squirrels- probably a bunny did it, I’m thinking. Anyways, it’s about a foot tall now… with no branches, pretty sad looking.

I’m trying to figure out what I can do with it. I called Arbor Day and they have zero idea what root stock they used. I have some scion wood, montrose and chinese mormon apricot- does anyone know what my chances of success are for grafting those onto the poor cherry? And would I need to chop the cherry down to the graft point, or can I graft onto the limb stubs? This will be my first time grafting. I’m prepared for it to be a flop, but am hoping for a surprise success! 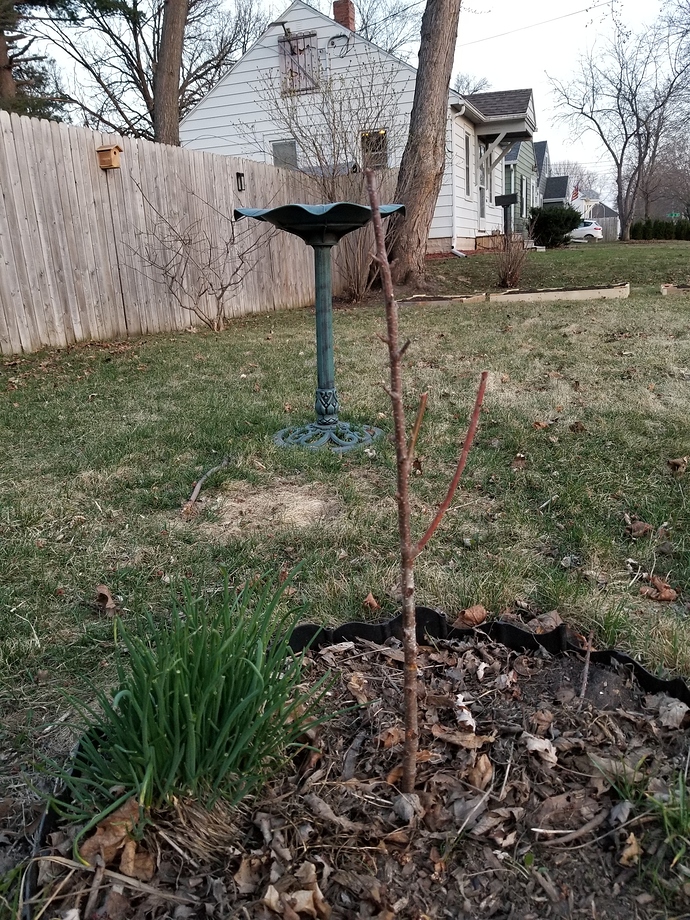 My thought is that you have quite a bit of tree left there, it should be well above the graft point and leaf out an grow. Maybe make a cage of chicken wire to protect it from whatever is eating it. I would have to check but I would think that apricot and cherry are not closely related enough to graft. I have grafted peach on apricot, just my thoughts

If it starts to sprout anywhere above the graft union (and it probably will), it should regrow just fine. As long as it is still alive and you protect it with a cage you’re really not set back much at all in the long run. You might want to prune the small branches off near the ground, they’re kinda low.

I have some scion wood, montrose and chinese mormon apricot- does anyone know what my chances of success are for grafting those onto the poor cherry?

It doesn’t make everything crystal clear but gives some important clues at the least.

Thanks. I’m going to try it, will be a fun experiment.

Katie I think it’s worth the experiment if only for the practice, but I think Stan, above, is right.

I know nothing about cherries, and don’t even know if it makes a difference whether it is a sweet or sour cherry. But I will point out that while you might not be able to graft to the cherry there is at least one rootstock that is used with some cherries as well as some of the other stone fruit, and that is Krymsk 86, unless Fowler’s is mistaken. That means that if the rootstock sends up shoots (quite likely, I imagine) you may be able to successfully graft to the shoot. Worth a try in any event. Good luck and have fun!