Ramblings of a new Apple grower

Whew! Every day is a new adventure in my little orchard. Mostly 3 year old trees.

I have trees that set fruit last year with very little fruit this year. OK, I’m cool with that.

I have some that at first glance I was disappointed in how little of the flowers seem to have gotten pollinated.
Then if I look around I see that the tree has plenty of apples and I just won’t have to thin any at all.
I guess that’s a good thing?

Then there’s the Goldrush! Ack! This little tree is about 7’ tall and not much bigger than a broomhandle.
There must be a thousand apples on this tree. I know that there is June drop but in my short experience
it seems that it is usually the weaker smaller ones that drop. Every apple on this tree is getting bigger.
Should I wait for June drop to lessen the work or do I need to clip them off?
There are clumps of 5-6 apples every 3 inches of every branch.
That’s a lot of Snippin’

I just have to wonder why the Goldrush got EVERY little flower pollinated and the Hcrisp right next to it
did not. Hmmm. I’ll have to watch the Bloom dates a little better next year.

I think most people would advise to thin now. Leave the largest healthiest looking fruit and thinnest the weaklings and any that shows disease or insect damage. The earlier you thin the more energy that is available for the remaining fruit to grow nice and big and sweet. 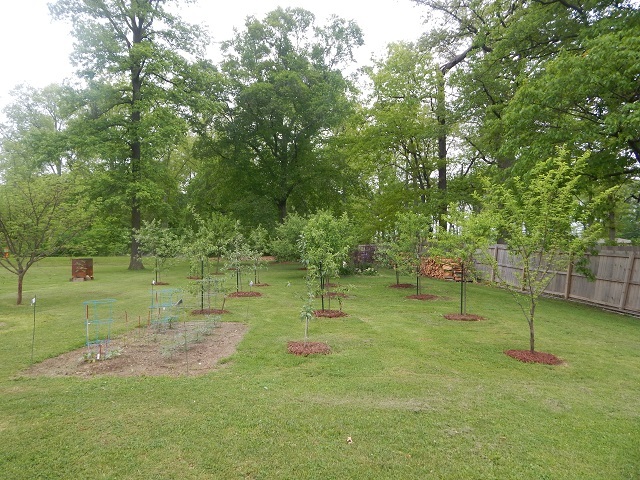 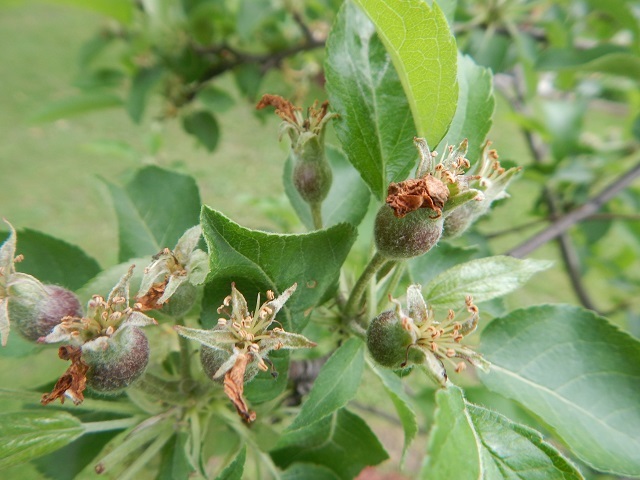 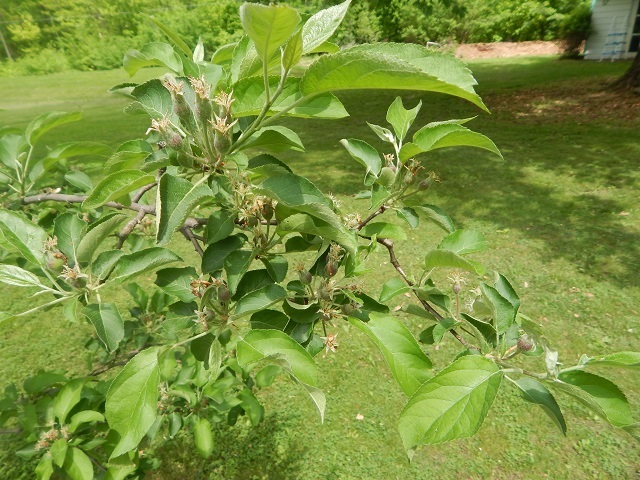 You can’t tell because of the poor picture but there are 40 apples in the last photo.

Very nice and tidy looking place you have there Daemon.

I took Alan’s advice to totally remove many flowers clusters that were so close to one another. Yesterday, I spent hours thinning the remaining fruit clusters. I’ve left 2-3 fruit per cluster this round. Any spurs or branches that will not be able to bear the weight of fruit load, I remove the whole cluster. I’ll be thinning them again in a week or two. My fruitlets are smaller than you. To me, the earlier you thin out the fruit, the better you help the trees save their energy.

Believe me, it is no fun to have your fruit trees go biennial. 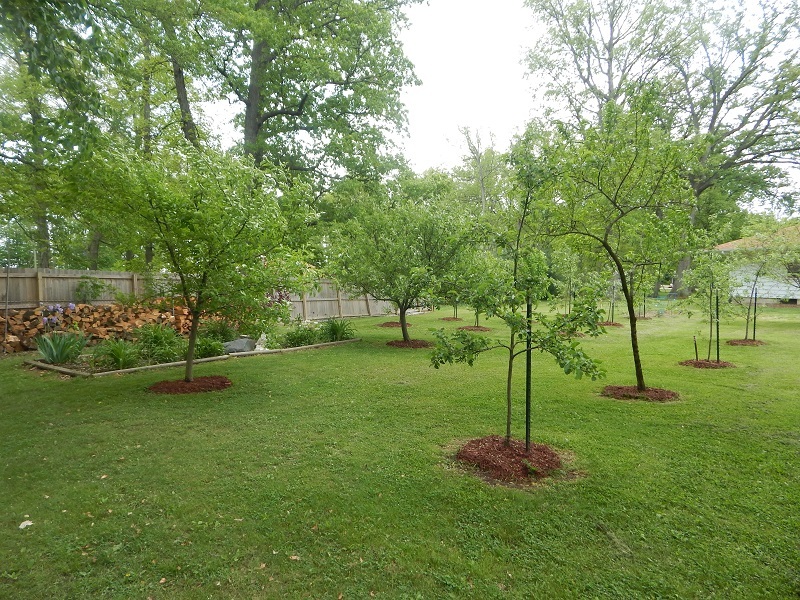 How big of a picture can I use? “Looking South” 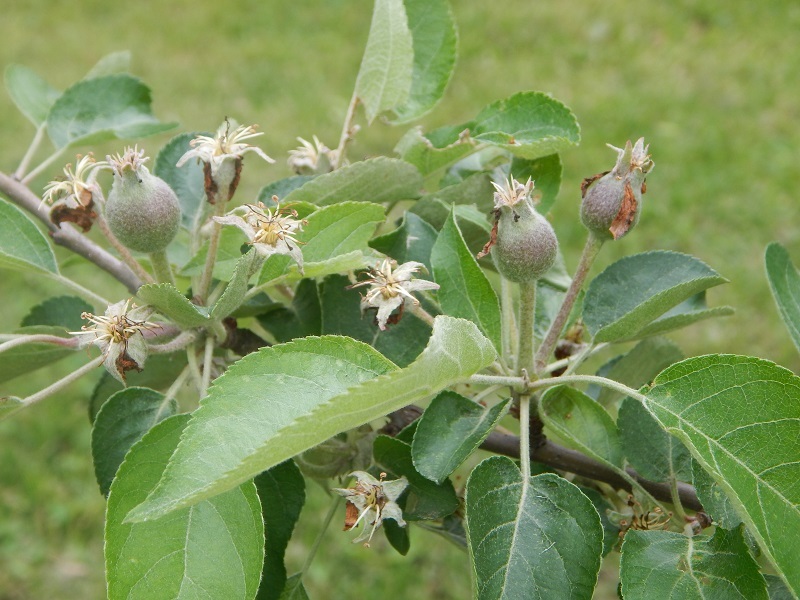 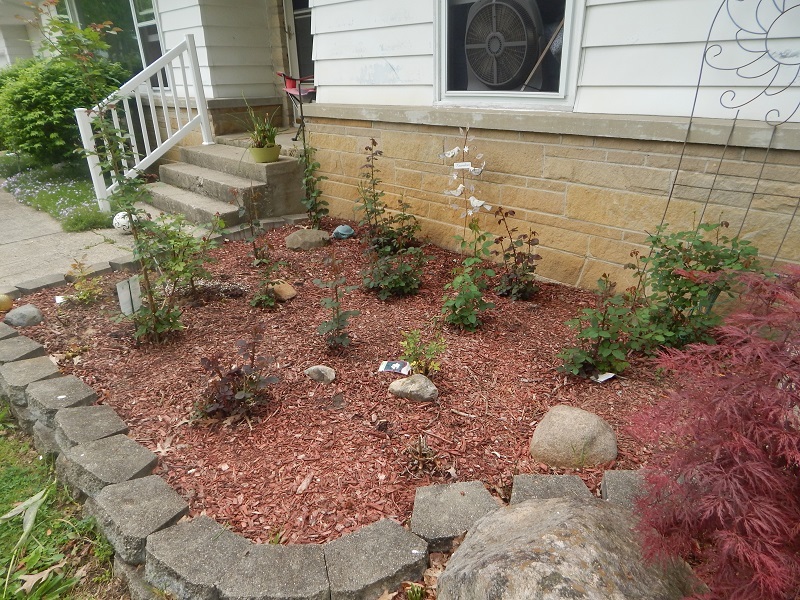 My Wife’s Hobby. There are more $$ in plants in the Rose garden than there is in my orchard.

I believe that fruit set is about more than pollination. Goldrush conserves energy to make fruit at the expense of vegetative growth. Young trees often go the other way and sacrifice fruit for growth, even if they wasted energy on flowers.

I have also had a problem with William’s Pride and Goldrush setting too much fruit. After my fireblight problem last year, I was advised to strip ALL the fruit from the mostly three year old trees to get the trees growing again. Spent hours cutting off the fruit. With no fruit to support the trees are growing well. A little Calcium Nitrate really helps push the trees.

Daemon, that is really an attractive back yard. Looks like it was finish graded with a laser guided grader. Really nice. You just never see ground that level in the Appalachians unless it’s in a river bottom or river valley. I’m envious.

Blueberry, how well does that Calcium Nitrate spray? Does it readily mix with water or are you top dressing with it?

That part of the yard is pretty flat but the photo makes it look more level than it is.
I have other parts that are so uneven that I should do some work on it. The mower scalps the ground up and down over the bumps.

I top dress with it, but it could be sprayed or injected into the drip system. All of the emitters in my drip don’t meter the water precisely - so I spread it by hand. It bounces a lot when it hits the ground, so I get a nice distribution. I can do the whole orchard in a short period of time.

I see. The reason I asked is because I’m going to do some experimental calcium sprays this summer to hopefully prevent bitter pit on my Honeycrisp. I’ve not purchased anything yet due to lack of first hand recommendations from here or elsewhere. I’ve not been able to decide whether I want to spray calcium sulfate or calcium nitrate. The sulfate goes further but costs more and the nitrate of course costs less, but gives an added nitrogen boost to boot. For me, it really would come down to which sprays better. Looking at photos of the two materials on ebay it looks like the nitrate may be more dissolvable. Don’t ask how I derive this from a photo, it just kinda looks that way.

Not sure about the cal sulfate, but my spray manual says 3 LB cal nitrate/100 gal or water or 2 LB cal chloride with the reminder to not spray the calcium chloride above 85 degrees. Spray 2 weeks apart and ending 2 to 3 weeks before harvest. Cal nitrate is very soluble so it should spray easy.
I had a terrible time with bitter pit on Williams Pride a few years ago and the leaf test came back suggesting boron to make the calcium available to the plant as the solution to the bitter pit, not more calcium

hmmm…boron. Never heard that mentioned, I wonder if the 20 mule team stuff would suffice? Olpea said it was basically agricultural boron and it is advertised as being very pure.
I think though the issue with Honeycrisp isn’t so much what’s in the soil as it is it’s inability to retrieve it, at least that’s how I understand it. I think commercial growers don’t even bother with soil applications, but rather go straight to foliar sprays. Honeycrisp has been widely known to have trouble with calcium even when in soils with plenty of it available.
Thanks for the tip on the boron, I’m going to investigate that a bit.

Here is a Purdue problem report on their own William’s Pride:

Problems: Severe watercore may be a significant problem in some seasons. Slight bitter pit observed in a few seasons. Severe bitter pit was observed on young trees with their first crop on MM-111 rootstock, on very sandy soil, under heavy nitrogen and irrigation. Fruit borne in clusters on short spurs, may tend to be pushed off as they swell, giving some loss to dropped fruit. Slightly coarse flesh texture. Uneven ripening will require two or more pickings.

I’ll probably give the calcium nitrate a shot blueberry, thank you for the reply.

I wonder if it’s more in the root stock. I wonder if my honey crisp will have that problem. I grafted to wild apple trees. I did notice the leaves grew big and wide last year more than my other trees. They were nice and healthy looking. This is my first year for flowers on the grafts. I’m looking forward to watching the apples grow.

I made the second round of thinning on the Goldrush. I took the clusters down to 1 apple each. That still left about 100 apples. I figure I’ll let them go a few more days so that I can more easily see which ones are the prettiest.

How many apples do you suppose that I should leave on the small tree? In the Picture labeled “Looking South”
it is the closet tree to you. It is North of the older Peach. I’m thinking 20? 30?

All of my new trees have significant new growth. Anywhere from 6 to 9" so far. (on every branch) I probably fertilize them too much but I am really wanting them to be larger than they might otherwise be. I put 2 cups (1lb) of 10-10-10 on them for the last two years once in the spring.

I am learning as I go… The two books that I bought told me to plant them 10’ apart on 12’ rows and that is what I have. Then I went and bought mostly Bud9 and some Stark that won’t tell you what they are other than “probably M9 or M26”. I wish now that I have either planted closer or bought bigger trees. I envisioned in my mind that the trees would almost touch in the rows when I was done.

The Original 2 trees are 20’ apart in the “looking South” pic. I’m guessing that they were M7. The new trees are the ones that are 10x12.

I hope that I am not boring. Going to see if I can post a PDF.

Daemon, my B-9 trees are 4 to 5 feet apart and 10 between rows which I believe is pretty common. Many commercial growers plant B-9’s at 3 foot spacing. So one easy fix your spacing problem is just to plant between your existing trees and end up with 5 foot spacing. Two cups of 10-10-10 sounds like a lot on young dwarf trees per application, I will let the veteran grows chime in but the University of Ga publication I follow calls for 1 cup per application for young trees. Seems like you are off to a great start, your place looks great, Chris. 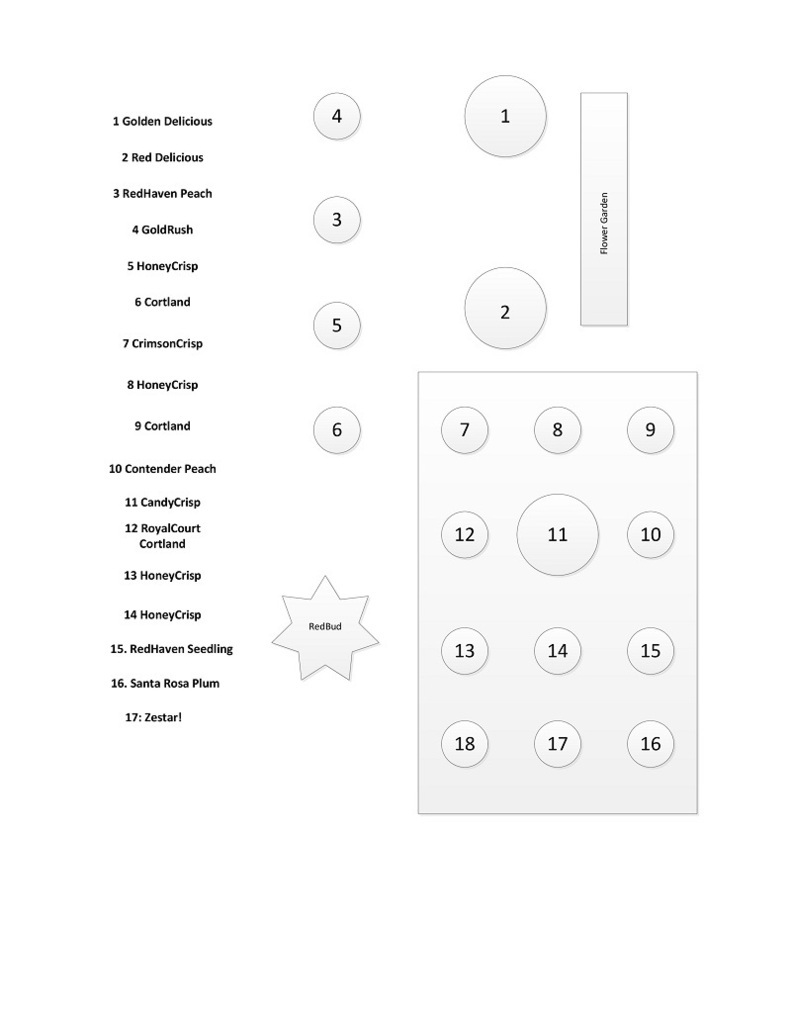 I have tomatoes in the 18 position.

The numbers coincide with the order that I planted them in .

Chris. I’ll bet those B9s look good at 4-5’. Do you have a picture?
I may plant in between but I’ll wait and see how big they get.

I would suggest devoting some time to study pruning on this this forum. You don’t have to settle for picking fruit from a ladder in the future.

Anyone can hack up a tree, the web is loaded with ignorant advise on the subject. So don’t get your info from anywhere other then here, or sources given here. There is no one right way to do it, so don’t torture yourself in trying to make it black and white. It takes a long time to get your mind around it. So as you learn things go look at your trees and think it through. Start learning now, but don’t do any cutting until next spring.