Georgia peach county of the 1800s was in the northern part of the state in the mountains, it is not that different from my climate.

Wasn’t it more in the midpoint. Macon, Craword, and Peach are more south than north. I don’t know about elevation, but the description I just read suggests it is somewhere in the middle of weather potential in GA.

Would be interesting to see if consumers would accept a gmo peach that produces strobilurin like the mushrooms.

My feeling is that if we are going to feed 7.5 billion and rising as a result of harnessing fossil fuels and other technology, we would probably be foolish to keep any of our best tools in the shed. Sharp tools have to be handled carefully though, and that’s a tough issue to get people to agree on. I certainly don’t completely trust the profiteers of GMO tech to accurately appraise what’s safe, (or the environmental left, for that matter), or my government not to be excessively influenced by them. But we may be between a rock and a hard place.

It would be nice if such issues could be discussed rationally, but who am I kidding?

Personally, I feel no great fear of GMO’s, but then, I’ve been fighting mother nature all my life. I may love her but I’m not sure she feels the same about me. She’s like the mother that lives in a shoe- she doesn’t play favorites.

Wasn’t it more in the midpoint.

Another thing to keep in mind is that brown rot was often a disaster for farmers in this period. They were trying to do whatever they could to get a crop in.

One good first-hand account from farmers around 1900 is in “The Kansas Peach”. This book contains many individual farmer experiences and you can get an idea of how bad things were. There are many cases where farmers mention pulling out various varieties which were rotting too much, and there are several reports of problems with the earlier (i.e. mid-season today) varieties. 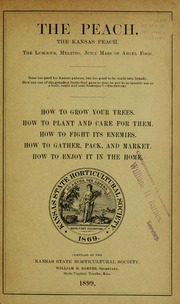 I don’t disagree that time of ripening is important in providing an advantage and can even be helpful with early ripening varieties. For years here I didn’t need to protect Harrow Diamond from brown rot- springs and early summer tended not to be that humid even if there was ample rain. I’m sure it all depends on the humid climate where peaches are grown.

I still think Crawford is slightly more south than north. https://geology.com/county-map/georgia.shtml, but it’s also quite west, and far from the warmer coast. Or maybe this map is not in proper scale. It’s average elevation is 778’

We could easily search out how its weather compares to yours, but on what’s important we agree anyway. I’m still a bit curious, so maybe I will do that this weekend. Time to go prune.

She’s like the mother that lives in a shoe- she doesn’t play favorites.

Not only that but she doesn’t treat any of her children nice. “She gave them some broth without any bread; Then whipped them all soundly and put them to bed.”

I really don’t have too much to add to this discussion about rot, since I spray w/ synthetics. Of all the peach varieties I’ve grown, just about all of them will have some rot if it rains heavy enough, even with synthetics. Without synthetics the loss to rot would be unsustainable.

Some of the worst rotters are TangOs I, Sweet Scarlet and Indian Free. TangOs is by far the worst. If it rains a lot I can expect to lose 1/3 of the crop even with synthetic sprays. Saturn (donut) peach probably rots the least for me. I have about a dozen Saturn trees and almost never see a rotted fruit.

There are 2 peach varieties that were bred at the Kearneryville WV fruit research farm. One is Sweet N Up and the other is Tiana. They are both supposed to be brown rot resistant. They have not produced yet, but I am hopeful.

Tiana was developed at Rutgers. The new releases from Rutgers (Evelynn, Selena, Tianna) are supposed to be bred for late bloom, cold hardiness, disease resistance and fruit quality.

Generally breeding programs east of the Rockies breed for resistance against bacterial spot, when they refer to disease resistance. I’ve not heard peach specialists give much attention to brown rot, other than maybe a passing comment.

The patent application for Tiana (AKA NJ359) doesn’t mention any special disease resistance for this cultivar. To wit:

I have been trying to obtain some trees of Tiana for the last couple years, but haven’t been able to source any. It’s supposed to be a good peach for the Encore window. Can you tell me where you got your tree?

I have been trying to obtain some trees of Tiana for the last couple years, but haven’t been able to source any. It’s supposed to be a good peach for the Encore window. Can you tell me where you got your tree?

Mark, I called up ACN, asked for Tiana along with some others and they sold me one… 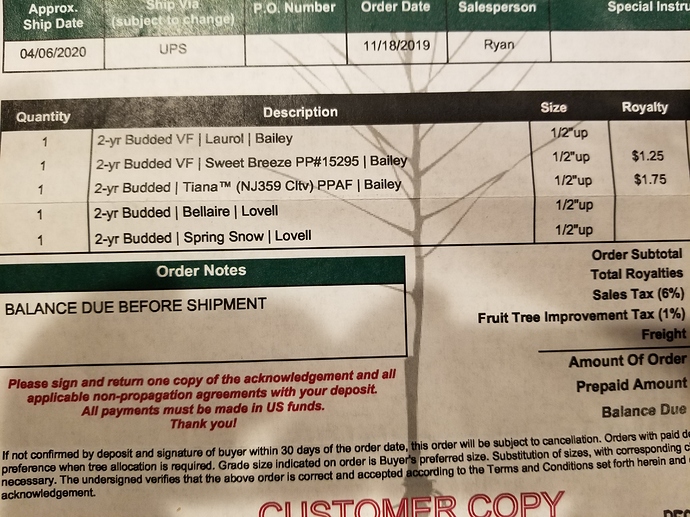 Dang, I ordered trees from Adams last fall (for this Spring shipment) and they didn’t show any Tiana trees in their inventory, so I didn’t ask. I’ll know to ask them about it next time.

Sorry about that. I must have gotten some bad information on them. I got my trees from Adams County Nursery last year.

Still time to alter your order. I keep changing mine right up to shipment.

Tiana This is another high-quality, late season yellow-fleshed peach from Rutgers Breeding Program we have decided to release. This variety harvests in Encore season, making it a very good option if growers are looking to replace Encore plantings. Tiana™ has been one of the most attractive varieties in its season that we have tested. The fruit has a beautiful red color with excellent flavor. Also worth noting, the fruit hangs very well for a prolonged harvest. Available Spring 2018. PPAF.

The prolonged harvest may make it a winner for home growers. I’m trying now to get one sent to me for trial. I just hope it isn’t sub-acid. Adam’s can’t be relied on to provide that fact in descriptions.

The patent application says it’s “moderately acidic” which I think I can live with. Unlike so many of the new peaches, this one is supposed to be productive, good tasting and a later bloomer. Some of the best attributes for what works best here. I’m going to call Adams today or tomorrow and see if they have any left to try.

Just took a minute to look over the rest of your order. For what it’s worth, it’s a thumbs up for what works here. I’ve got all those peaches except Tiana and Bellaire and really like them all.

Bellaire is another Loring sport which ripens about a week after Redhaven. My guess is Bellaire performs a lot like Johnboy which is a nice peach. Like Loring and all it’s mutants, it’s not super productive.

I’m going to call Adams today or tomorrow and see if they have any left to try.

Exactly what I did by e-mail to Jen.

I called Caleb just now at ACN. He was on the phone and supposed to call back.

Like Loring and all it’s mutants, it’s not super productive.

In the NE they are or at least have been. Our winters seem to be heading south so evaluations are probably going to need readjustment as we move “forward”. After a couple months of mild weather we just went into overnight mid single digits. Got down there for only 3 hours or so, but buds tend to be a bit swollen. Tough to know how many buds may have been killed.

Just heard back from Caleb and they are out of Tianna. Put me on the waiting list.

same, but I begged for something tiny and/or crooked that they might otherwise dispose of.

Just took a minute to look over the rest of your order. For what it’s worth, it’s a thumbs up for what works here. I’ve got all those peaches except Tiana and Bellaire and really like them all

Mark, I’m sure by now that you are catching on to the fact that I am piggybacking off of all of your work with first hand evaluations of peach varieties. Thanks for blazing a trail for me to follow! Bellaire was a slight departure, but Bill Shane spoke highly of the eating quality (soft and juicy appeals to me) and the window was good, so I figured it was worth a try.

I have been in the back of my mind thinking about the question a few posts up in this thread, namely how growers dealt with brown rot 100 years ago. I just found this interesting booklet which describes how they were losing much of their crop until lime-sulphur came along as a treatment. See this old book:

Something to chew on…