Last winter I live trapped a simi wild calico (female) cat and brought it back to the house. It was young but grown. She had a litter of four kittens in early spring but failed to raise any of them. I put out cat food for her daily but tried not to feed her so much that she would not want to hunt. She really showed no indication that she was controlling any rodents. She had a second litter of kittens in late august. When they got up to a size that they were needing weaned she really started hunting. She has started hunting out in the fields around the house and in one afternoon i saw her carry three voles back to her kittens. I used to have some truly feral cats that were a terror on rodents so I am glad to see she is taking their place.

Some of our Kansas rats/rodents practically carry back our feral cats to their litters. We grow so much grain here the rodents get really big. I have had them attack full grown rabbits and chickens. I set a trap for one residing in my shed and I came back and my rat trap just had fur in it. I think they call them trading rats or pack rats. We have feral cats but the cats and everything else fear them. I found about 50 cherry tomatoes from our garden in this rats nest he planned to use for food. I fed him poison and he ate it and didn’t die. He’s on my list but I’m not sure if even a rat terrier would do the trick. If this rat trap does not work I’m going to find one meant for racoon’s. His nest I ripped out was several feet in diameter. I had to go through it and take back my screwdrivers etc. He stole for his nest packed in with weeds and branches. The feral cats help us a lot with mice. When I was bailing once I saw at least 30 rodents running in front of my tractor and grain fields are worse. I hate snakes but around my house you would think I love them because there are plenty of them because I don’t kill them.

Are weasels good or bad in the garden?
Dry ice for dealing with chipmunks and other ground dwelling critters?
Derby42 November 12, 2015, 9:35pm #3

Now that’s a rat, lol. I have had a few pack rats here but mostly just mice and field rats. I had a pack rat in a shed that I couldn’t trap. He would just trip the trap and and steal the bait. I also tried poison but it didn’t work ( I have read that they can be hard to poison because they carry off the poison and hoard it instead of eating it). I finally set up a light and some bait and lured him out at night in air rifle range.

@Sam
I did not know that trick but there will be swimming lessons for pack rats at my house this weekend if the trap doesn’t work today.

My pack rat showed up late last winter left in the summer and is back now. If I have to I will run an electric fence inside the shed. He’s a pretty persistence unwanted guest. I used preditor urine on his nest , poisoned him, trapped him , stole his food, put a snake in the shed you name it. What Jack Dempsey was to boxing he is to rat. He’s either very lucky, very smart, or very tough.

Neat trap, see if I had been on this site back then I could have fixed him right up.

Did I mention when I checked yesterday he started rebuilding his nest…ugh I even left the door open to the shed in hopes a bobcat , coyote, owl, fox whatever might eat him but of course they didn’t …

That rat needs to walk the plank!

We had a rat like that in a tack room where I kept my horse feed. It was almost as big as a opossum. If you opened the door it would stand there and dare you to come in. I finally got it one day with a .22. The problem was it was in the city so you had to be careful about shooting guns there.

Last year this one left animal bones of his victims I discovered on the floor like rabbit and chicken that were identifiable. Your rat sounds like my rat insteng. I may use cherry tomatoes for bait instead of peanut butter. The guy at the feed store told me not to touch the food used because this type of rat may perceive it as s trap so you have to weargloves.

Pack rats were mentioned. Like voles they will pack poison bait away so the effects of the bait seem to be ineffective. But in reality they aren’t eating it.

Rats are really more susceptible than mice to typical rodent poisons, because rats don’t have a gall bladder to filter out the poison.

I’ve seen infestations by rats and mice where grain was abundant, when I was a manager for a commodities company, and in other circumstances. By far, rats are the worst. They will literally eat a building down. Fairly quickly.

That’s the way I feel about the cat food I buy, pretty cheap rodent control. Before this cat I had five large very wild grey tabby cats that I trapped at my grannies house . They were great predators. I kept them for two years but a neighbor got some kind of a malamute cross looking dog that hated cats. It took it about six months but it got every one of my cats. I’m just glad to see my new cat earning her keep.

One could always resort to homemade traps such as in this video. Probably not recommended if you have pets…or children…or a wife, neighbors or any other living thing nearby. Warning: there is one bit of bad language involved. Start @ 1:20.

apple, that was wicked. don’t think it would fly in the suburban neighborhood. would be surrounded by flashing lights in a hurry lol

Some small critter (vole, chipmunk, mouse, or something) has been digging up my smaller potted plants. Put out snap traps with peanut butter. This morning one is gone, nowhere to be seen. I figure I’ll find a dead rodent somewhere hidden soon. Had 2 go off without catching anything.

There are several strays in the neighborhood, but I think 1 or 2 neighbors feed them so they are lousy hunters.

This one was about a foot long. He and his friends already rebuilt there nest and stored away some of my Egyptian walking onions aka winter onions and a new supply of cherry tomatoes while I was at work. Did I mention they tore up the inside of the shed in the process again ? Ugh 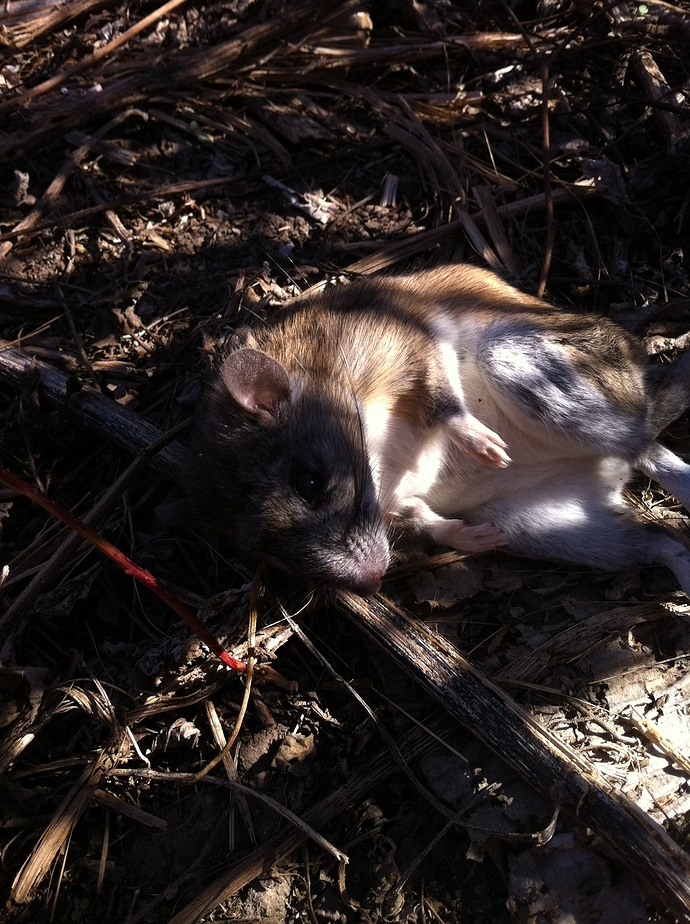 One technique which is suppose to help is to use the poison bait that comes in the form of compressed cubes with a hole in the center. You run a wire through the hole and tie it to a stake or the like. The rat finds they can’t run off with the poison, so they eat it, at least long enough to bring it home.

I have also noticed that with some rodents, it takes several weeks of taking poison before they stop coming around. They may be getting immune to some of the agents.

Wow now that is an supersized rat.