Looking at some of last year’s bark grafts on large diameter apple branches I see rot and wetness under the Doc Farwells that I used to coat the entire cut surface. Makes me think I should cut off the Doc Farwells now, let the stump dry out and maybe leave new bark graft stumps uncoated in future and just use Doc Farwells at the base of the bark graft. Ideas?

Share pictures. More cuts could do more harm than good.

What I really meant instead of “cut” off the Docs was just scrape it off so the surface could dry out. I have seen a video of someone bark grafting and not coating the entire stump surface, just at base of scions. Photo is of one of the grafts last spring when I did it, don’t have photo of the wet/rot under the Docs now. It appears Docs has created a perfect rot environment. Last spring was first year I’ve used Docs. It has worked well on smaller stock though. All the grafts took including more that I put on the larger cuts.
. 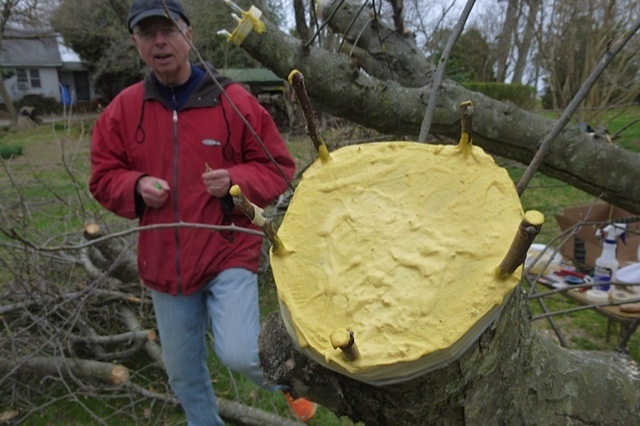 My impression is the stuff rotting is already dead anyway, and eventually the tree will grow over it whether dry-dead or wet-rotten-dead. I have used Docs for 10+ years and never removed it and never had any problems.

Thanks Scott. I will continue to use it then. Do you ever leave the stump bare, uncoated?

I have either coated it or put large parafilm over it. Its probably OK to keep bare but I never did that - I like how no evaporation is happening when its all covered.

I have either coated it or put large parafilm over it. Its probably OK to keep bare but I never did that - I like how no evaporation is happening when its all covered.

I recently did a few larger cleft grafts and I simply spread parafilm as Scott sometimes does. Whether it really makes any difference in the long run I don’t know. What I do like about the parafilm is that it seals long enough to hold moisture in while the graft starts to mend but it usually self removes after a few months.

I would not have painted the interior on a stump that big. That isn’t what it is for. But I would have made sure to get liberally around the entire base of that graft union to prevent moisture loss at the union.