Heirloom vegetables are very valuable because we know we can harvest and grow seed like black seeded simpson lettuce over and over. Very few grow lettuce for seed so i thought this was a good oppurtunity to post a few photos many have never seen before. Heirlooms are very rich in nutrients. Growing our own seeds give us a true independence from many large corporate seed companies. Self sufficiency is important to me. 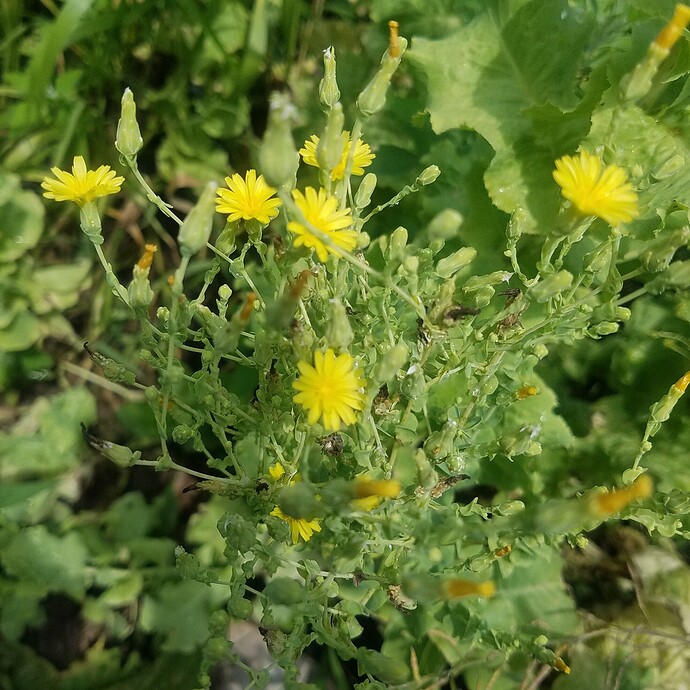 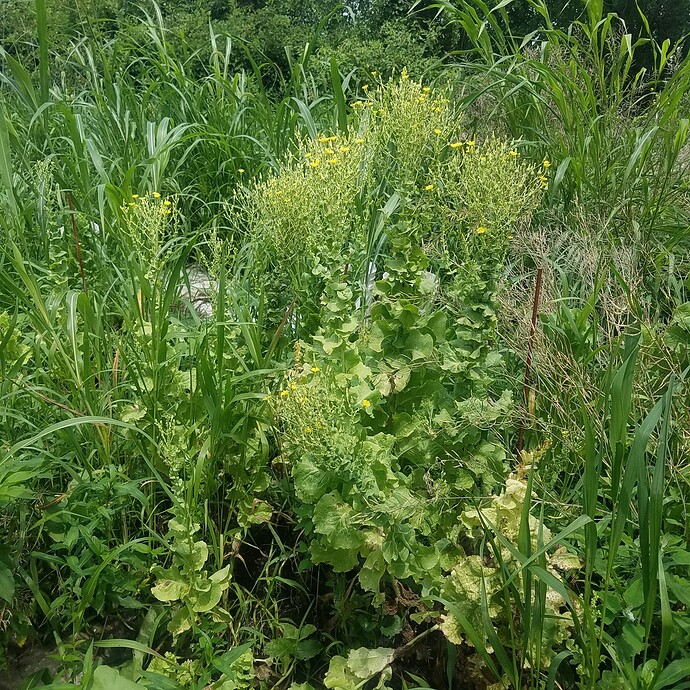 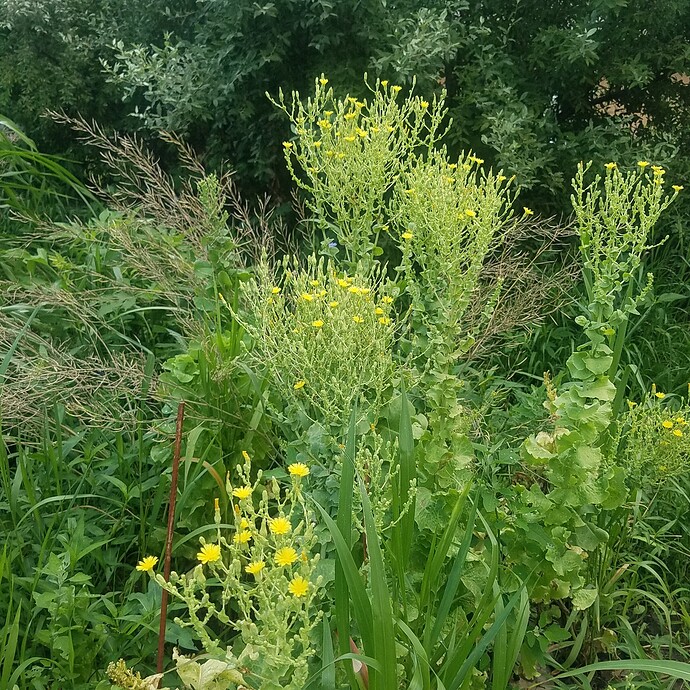 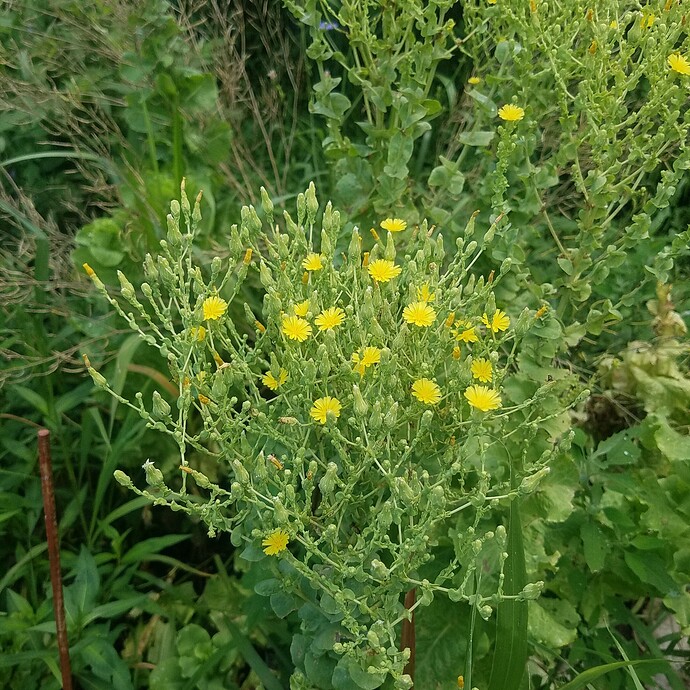 Great post, Clark. I’ve been starting to save more and more seeds the past few years. Once you know what works for you in your location, you may as well keep growing it. And it’s better to rely on yourself to be a steward of those seeds than to expect to be able to purchase them every year.

Last summer I saved seeds from Black Seeded Simpson lettuce. The plant gets rather large but it was worth it. I had a very nice crop this spring and they were true to type. I might save another type too this year but they might cross pollinate so I don’t know,

I also saved seeds from a volunteer yellow cherry tomato. This is the second tomato to bear for me this year. Probably descended from Sungold, not quite as sweet but still very good and I plan to continue the line and see what happens. They would be F3 generation now.

I saved seeds from Pink Banana Squash. They germinated faster than the original packet and grew like crazy. This year, I’m hand pollinating my squashes and keeping the flowers in bags until fruit sets. Pink Banana Squash, Fordhook Zucchini, Red Kuri Squash, Costata Romanesco Zucchini, Illinois Squash, Galeux d’Eysines, and Gete Okosomin squash. Most of the same species varieties are widely separated but as a precaution I bag both male and female flowers and hand pollinate. For fun, this year I also crossed Pink Banana with Red Kuri to see what happens. I need to be selective and next year want to try a Buttercup squash, do might not continue some.

My basil, chives, garlic chives, marigolds, Four Oclocks, cosmos, cucumbers are all from home saved seeds. Some are through multiple generations in my garden.

The plan is to save bean seeds this year, and open pollinated tomatoes. Several are new to me, probably BrandyFred, Roma VF, Alpateiva 905A, Tanunda Red, Improved Dwarf Champion, and Extreme Bush. Depends on how they do. Also possibly some other open pollinated types if they are good. Maybe Muscovic, Purple Russian or Golden King of Siberia if they turn out good this year.

I let a Swiss Chard go to seed this year. Over six feet tall now and takes up a lot of room, so I don’t know.

Not saving corn seeds - needs too many to genetic stability.

I overwintered some onions which are blooming now. I will grow some of those next year as an experiment. I don’t know if they are hybrids, they were sets last year, “Yellow Onion”. I’ll overwinter some Yellow Spanish onions this winter to save seeds next year.

I have been saving seeds from a NE Chinese pole bean for 20 years. This year I plan to save Blue Lake Bush 274 bean seeds too.

Saving seeds - interesting, self sufficiency, frugal, can be reliable, can develop lines that grow well in one’s own climate and garden. It can take some effort, and not everything is worth it or does well.

Garlic is from saved garlic bulbs and I grew out bulbils this year.

There are some good books about saving seeds. I like “Seed to Seed” by Suzanne Ashworth.

Seeds are becoming way too expensive and so is shipping. Some new hybrid varieties are good, and I prefer if they are disease resistant, but some new ones are not any better in my garden than heirlooms. Saving seeds takes some space and planning but if they are open pollinated types and do well, I’m all for it.

Its tricky to grow squash and others if you grow 2 types. I had tan pumpkins once and yellow ones another time which tasted bad. Over the years i decided to grow my heirlooms like corns, beans , squash seperate. The three sisters played such an important role to natives.

Some people use tape to close the squash flowers until they are ready to pollinate. It takes a little observing to know when they are almost ready to open. They need to be checked every am and pm. The male and female flowers both need to be covered so bees wont mix unwanted pollen on the anthers and stigmas. I pollinate in the morning and re-bag the flower. I do plant different varieties of the same species on opposite sides of the yard anyway. You are right, it would be easier if I only grew one variety but I like too many of them and we eat them all. If my yard was smaller, I would just grow Pink Banana (C. maxima), Costata romanesca zucchini (C. pepo), and Illinois or try a butternut type again (C. moschata).

I think you should be able to grow a C. pepo, a C. maxima, and a C. moschata together without much risk of them crossing. There is some disagreement but in general it seems correct. I only have one C. moschata - Illinois squash - because the others have not done well for me. I would like to grow butternut but they dont produce well in my garden.

I may regret not isolating tomato varieties but I grow too many types. Long term goal is reduce to a few reliable ones that I can grow repeatedly, with a novelty or two to keep it interesting. I would like to find a pepper type or that perform for me but so far none are outstanding in my cool climate.

It’s interesting to me how many things I grow that originate in the Americas - most of my vegetable garden. Corn, squash, tomatoes, beans, potatoes, peppers.

I think it would be a good thing if more people saved seeds. Maybe the varieties would adapt better to the various climates and garden conditions around the country. What does well in Pacific NW is not necessarily the best for Midwest or SE or NE. My family saved their seeds for many decades. Their favorite were Pink Banana Squash, Pink Ponderosa Tomatoes, and then some kind of garlic and potato onions.

I don’t save as many seeds as I used to, but tomatoes and beans are some of the easiest to come true to type. I used to fret more about other things, but I remember hearing a seed saving advocate say that on a home scale it’s OK if it’s not perfect and you get some cross pollination. If there ever comes a time where your variety is needed for the greater good, there are whole departments at universities who can clean up the genetics and release it. Takes a lot of the pressure off.

With that understanding, I’ve been able to make good progress working on my purple popcorn even though I’m working in a community garden plot with who knows what growing around. I also save butternut squash seeds, because 99% of moschata squashes being grown are going to be a butternut type, so it usually comes out pretty well.