Hi,
A little while ago I purchased a 10 gallon Jiro persimmon tree. It is around 7 feet tall (including pot)

It has several branches all the way up the tree.

I was told Jiro is somewhat unreliable in my area (pacific northwest) as we have rather cool summers and Jiro doesn’t always ripen. As a consequence, I plan to graft on the existing branches with “Izu” scionwood which I have already obtained. Izu is supposedly much more reliable in our area.

I will replace some of the existing branches with Izu whip and tongue grafts: The diameters seem to match pretty well.

Is there anything problematic with this plan? The Jiro has broken dormancy has has a leaf or three on each branch. Izu scionwood is dormant.

My only experience grafting is with apples and pears where I have been successful. I’ve heard that persimmons are much more tricky.

Anything I need to be aware of?

After care is especially important. Take off ALL new growth below the graft, religiously.

Also, I grafted Nikita’s Gift last year (successfully) and it took 2 months, almost to the day, for any growth to happen (May 26th to July 25th)

Also I grafted 4 scions and only 1 took. Of course once it did it branched out in 3 places, of which I removed all but the strongest this spring once growth began swelling

Scott,
Did you graft directly on top of the rootstock (Lotus/Virginiana?) I plan to graft on the Jiro but let several of the Jiro branches still continue to exist essentially creating a two variety Japanese persimmon tree.

I have heard that American persimmons can branch prune but not sure if Japanese persimmons do the same.

I put in 4 grafts of Izu on my Jiro tree.
Hope they take! 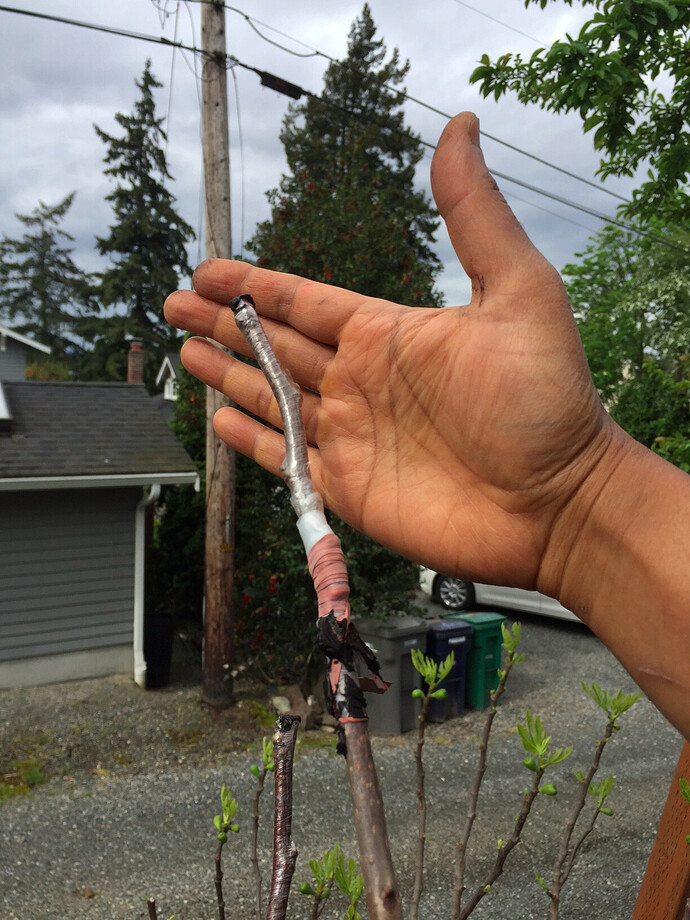 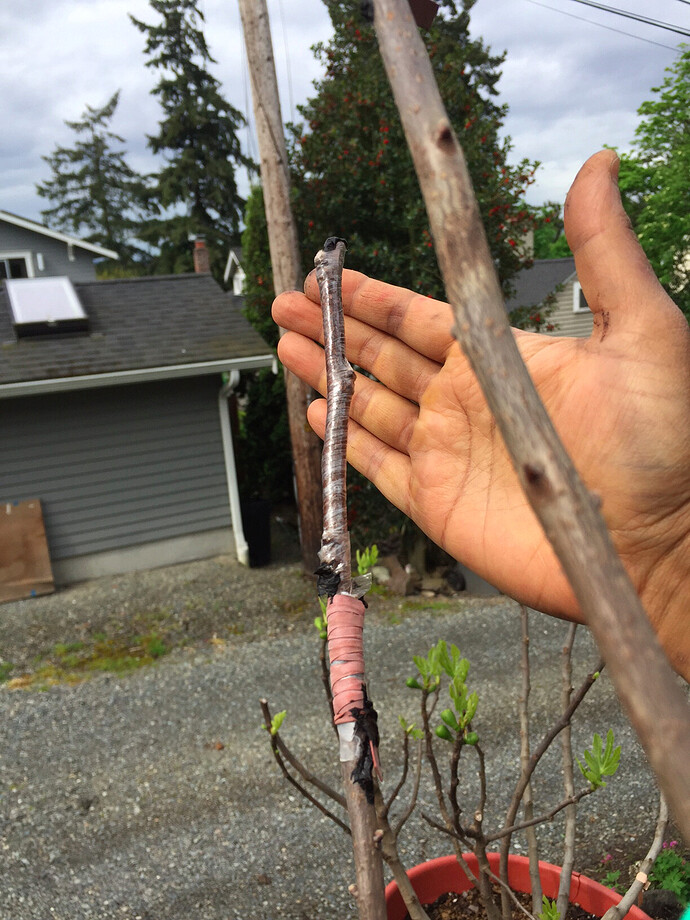 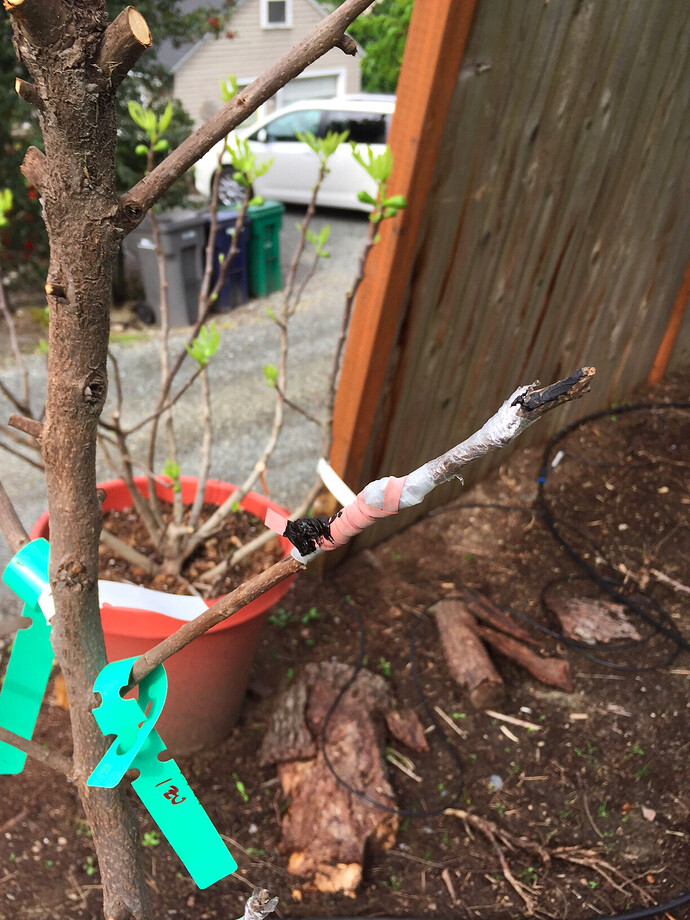 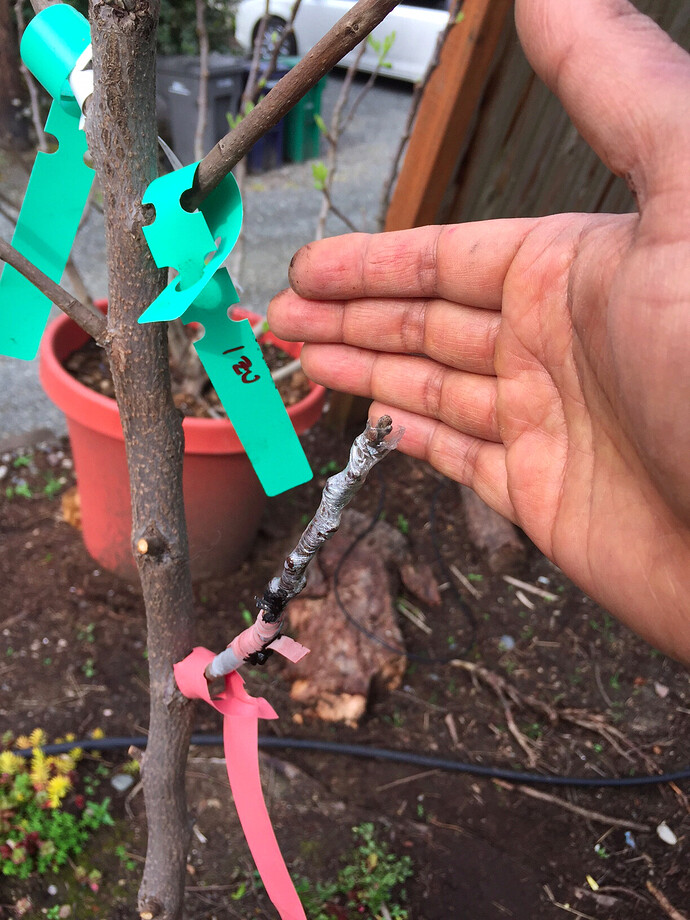 I did graft directly onto the rootstock. The plant was originally an Ichi Ke Kei Jiro, but a bad winter took out the variety.

Grafts look great, btw. Now just keep all the other growth under control.

Hi and Welcome Ram. Nice to see another Pacific Northwesterner here! Best of luck with your grafts - they look good.

How did it do?

All of them died except 1. Basically 25% success rate. Hopefully this one branch will grow well.

A far cry from my Apple/Pear/Fig/Plum where I got nearly everyone to take.

I know the mistakes I made: Didnt remove the growth from below the graft and didnt protect the graft from direct sun/dessication. Also, in hindsight a couple of scions were suspect.

I also confirmed that Jiro is unreliable in our area. All of them ripened but they tasted… well tasteless.

Sorry if it was mentioned upthread but was rootstock leafing out? I am upper midwest but here at least the main concerns for persimmon are:

Yes, rootstock was leafing out. I did use parafilm on the scion but still we got some hot days.
I think the main problem might have been bad scionwood.

I probably did everything wrong with last years persimmon grafts except for covering with parafilm. I attempted three grafts and long after I thought none would take one started growing. Compared to apple grafting one out of three is not so good. I plan to add the following techniques many of you suggested.