I’ve been thinking of building an arbor/trellis on the walkway at my front door for a couple years now, but I haven’t really come up with a good plant to put there. Zone 6b (zone 7 since it’s sheltered), SW facing with a decent overhang from the eaves, full afternoon sun. Since it’s at the front door it can’t be too messy. Edibility is good, but not required. Current thoughts…

I was curious if the braintrust has any good ideas. Are there any vines with edible leaves?

Apparently maypop (Passiflora incarnate) foliage is edible, as well as the fruits. Hm …

Any chance coral honeysuckle might work? Nice to have hummingbirds visiting your front door. You’d probably need to plant several to get enough coverage, but I think it can be evergreen which might also be nice.

I don’t really like honeysuckle, to be honest. Gets mildew and aphids. 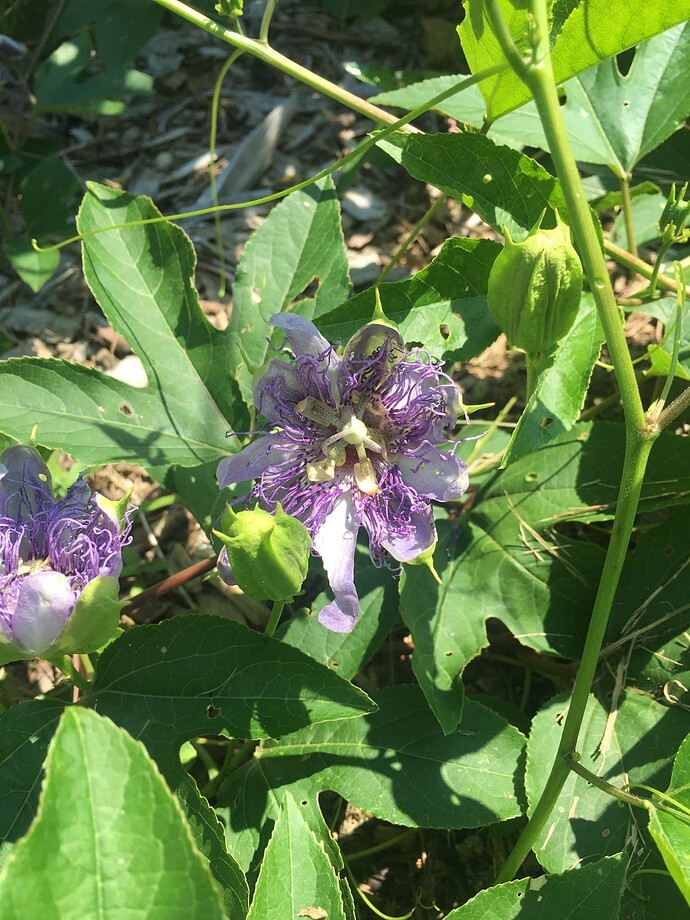 I second passion fruit for flower, foliage and fruit. very easy to maintain. @Blake gave me two as gift and now they pop up every where.

If you like, I can send you some vines in spring or fruit in fall for seed. 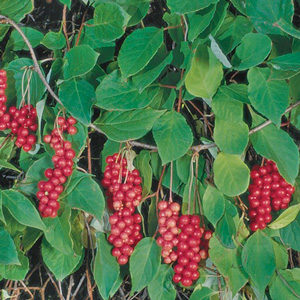 Have you eaten these? My understanding is they aren’t really for fresh eating.

@ampersand
They are ideal for condiments.

There are many seedless grape varieties, even Concord that are worth considering. I have never had to spray mine and my wife often uses the leaves to prepare edible delights. The only required maintenance is an annual pruning
Dennis
Kent, wa

You could try muscadines if any are cold hardy enough?

If I was you, I’d maybe go for grapes if you want fruit, or native honeysuckle for looks.

I know at least one person near me has lots of issues with disease on their grapes, so it may be an east coast/west coast difference. I have a tiny Jupiter growing currently and am considering very few other options.

Yeah, I believe black rot is bad in this area.

I’m in 7b and have a trellis shading a big window on the west side of my house during the summer. On my trellis, I started with Hyacinth bean (Lablab purpureus) which is an annual here but grows very fast. It’s supposed to be edible when cooked, but I’ve never eaten it. The leaves and flowers are gorgeous, and it produces a lot of seed for replanting every year. I replaced this with two muscadines because I wanted to get shade on my window as early as possible, and now that my vines are 2.5 years old and fully covering the trellis, they accomplish that earlier than the Hyacinth bean. Southern Home grape is a self-fertile muscadine hybrid that has unique and beautiful leaves that would make it the most ornamental muscadine that I’m aware of. The fruit are tasty but smaller and thicker-skinned than the best muscadine fruit. Lane is my favorite self-fertile muscadine, but I can’t vouch for hardiness north of 7b. 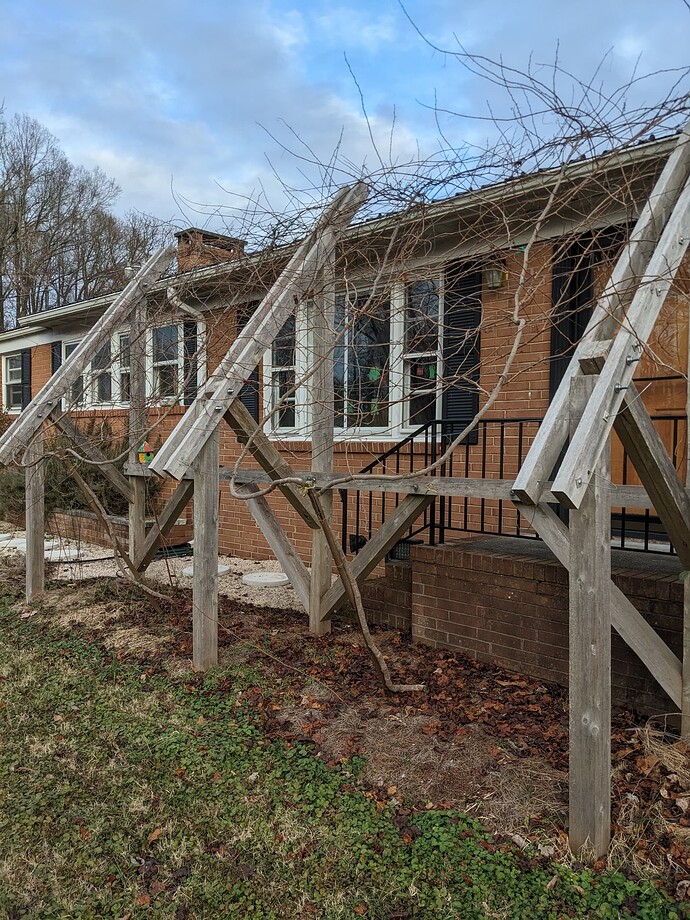 My maypops are beautiful and tasty, but they don’t “pop” out of the ground until June here and would struggle to fill a large trellis most years before the first freezes knock them back. They also sucker aggressively, often as much as 20 ft from where I plant them. So I like to keep them in a spot where I can easily mow a perimeter to keep them in check.

As for edible leaves, sweet potato can make an attractive vine (but isn’t the best climber, so would need to be tied to a trellis). The leaves are good cooked like spinach. A lot of my West African friends locally beg me for the leaves from my sweet potatoes to cook and eat this way. There are ornamental sweet potato cultivars with variegated leaves that can be quite striking.

Malabar spinach (Basella alba) is another vine with edible leaves and really pretty red stems. It has a stronger flavor than sweet potato leaves (for better or worse). It’s a moderate grower and doesn’t like to branch, so you might have to plant multiple plants at close spacing if you wanted to cover a trellis. But the contrast of the shiny green leaves with the bright red stems gives it ornamental potential. Some cultivars have leaves with red veins that are even more ornamental. I haven’t done this, but I’ve heard that some will grow peas in the early spring and then as the weather warms up plant Malabar spinach to grow up over the peas on the same trellis for the rest of the summer until fall.

I’m not that far from you in VA. Concord and muscadines have been rock solid no spray for me. Bees really seem to like muscadines though.

Another option is hops!!! You can brew beer or make tea with them.

Also nasturtiums if you want an annual.

The shoots are also edible with hops and actually taste pretty good!

How about a climbing rose? You could do something with the hips and petals.

Wisteria flowers are edible and make delicious drinks… most of if not all of the rest of the plant is poisonous. Nitrogen fixer.

Here in TN … 1 loganberry crown sends out 4-6 primocanes… 15-20 ft long. Not a vine… but very long canes that will be loaded with big pretty berries each spring.