Show Off Your Figs and "This year Harvest"

Ischia Black UCD it looks great! That one is been on my radar for a while!

Which variety are the green ones on the plastic bag?

They sell these at the store near me. I buy as many as I can because I love them so much. I can only imagine fresh off the tree. But I guess that is why I am adding a greenhouse.

Figs season is officially started for me , I have to pick every day otherwise ants and black birds will eat.
It will not be possible to post individually due to the number of figs. Mix of everything 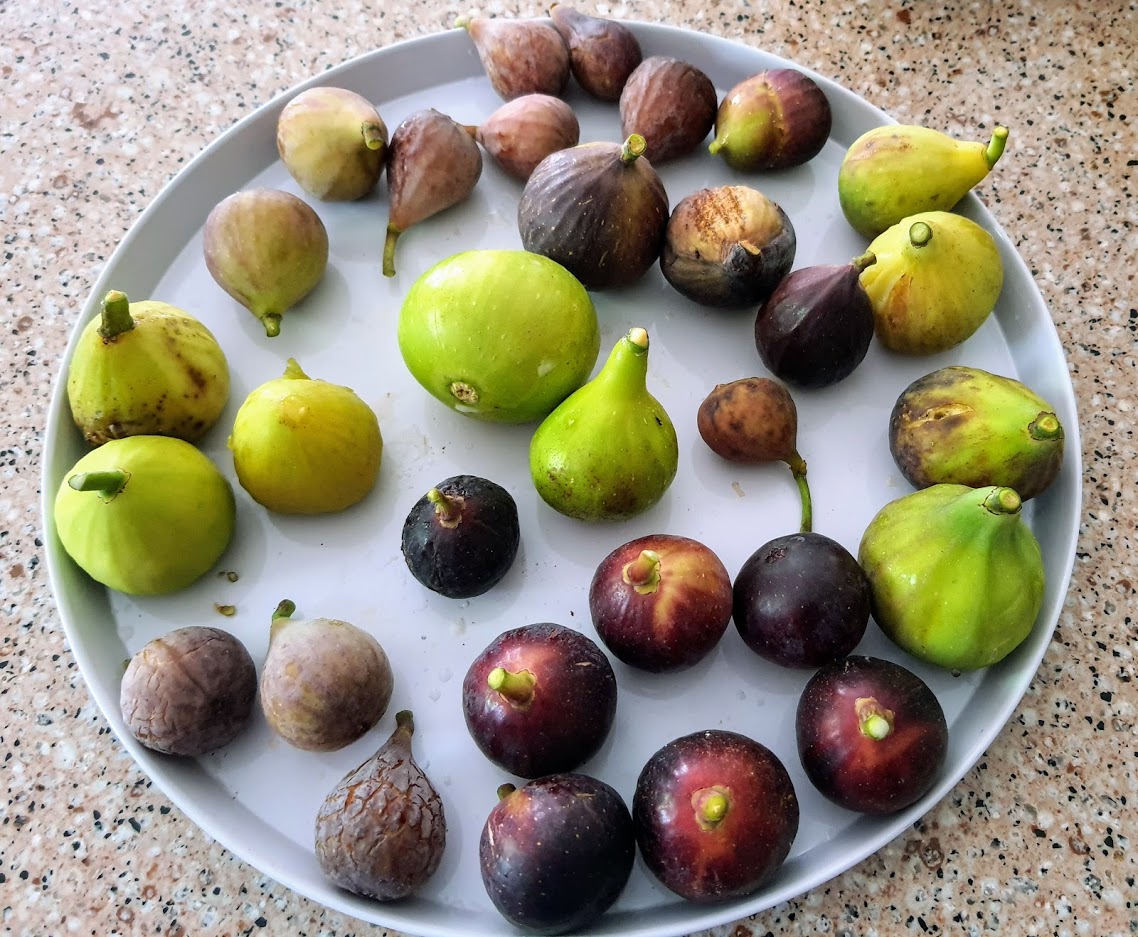 Emalyn’s Purple - very sweet with moderate berry flavor. This is a first year graft and I can see it matching Harvey’s description (intense berry flavor) next year. I could have left it shrivel a bit for 1-2 more days as @fruitgrower suggests, but I need to control the ants (you can see one on my finger in the first pic). My daughter’s (and my) favorite so far. We like it better than Tiger Panache or Unk Pastilliere 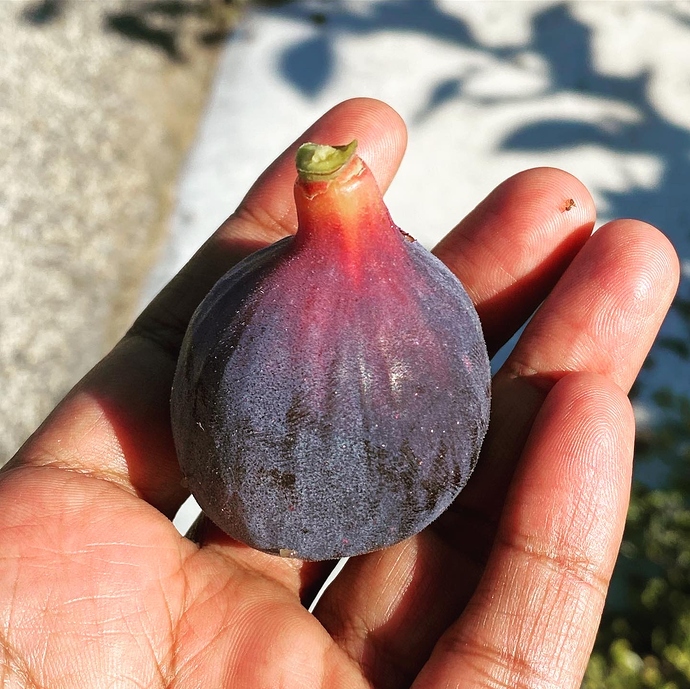 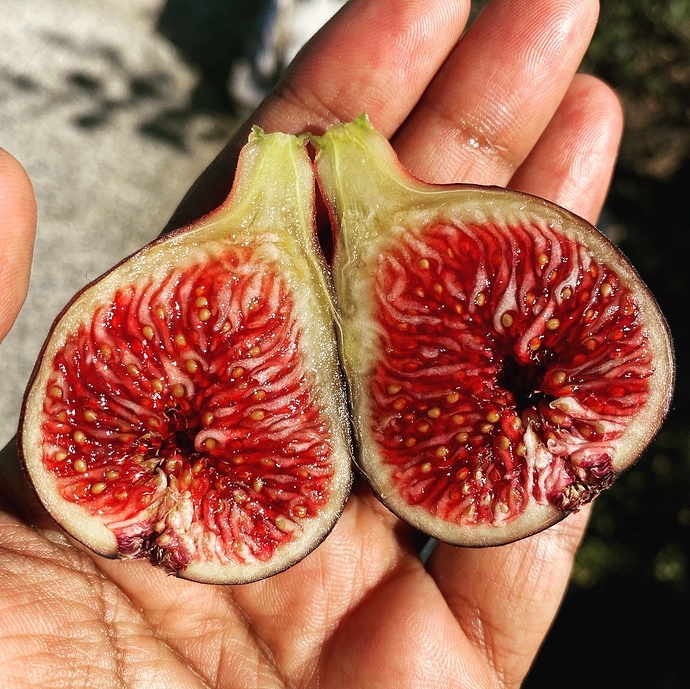 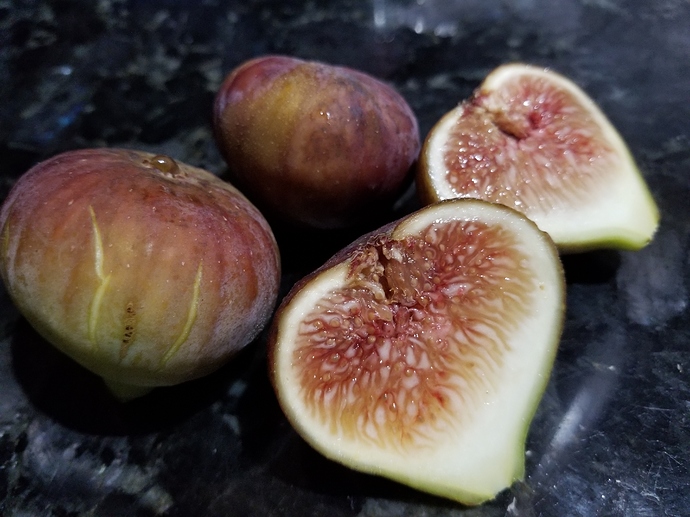 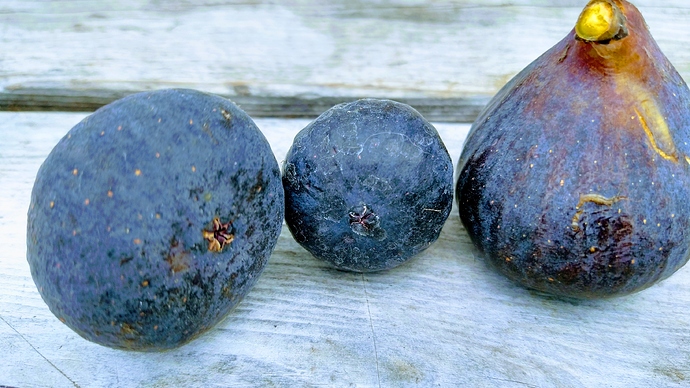 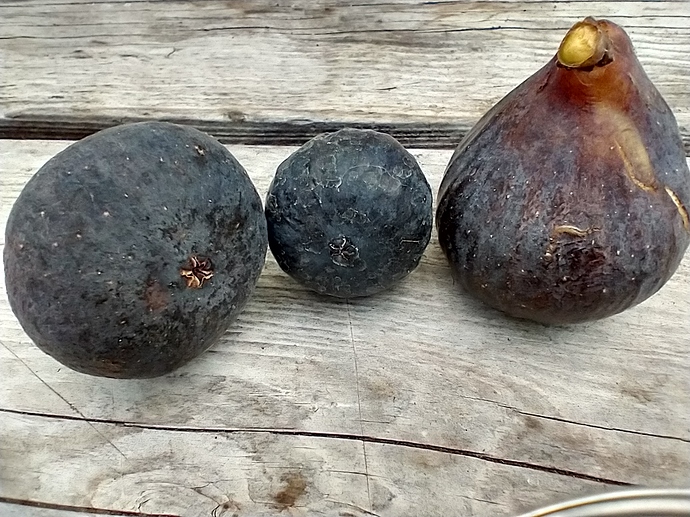 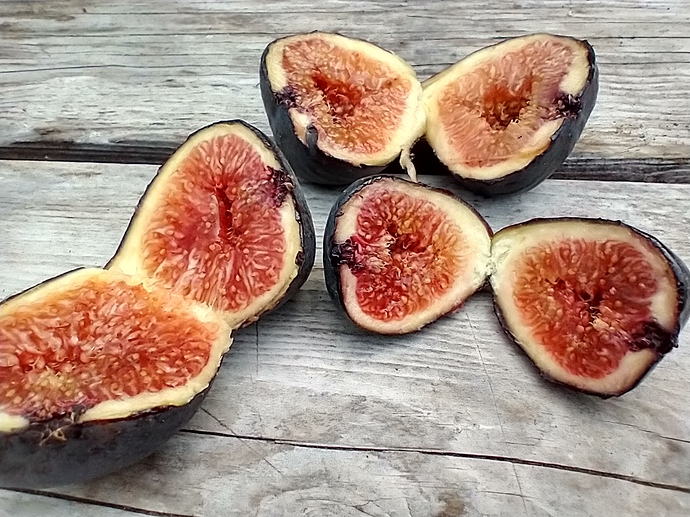 Thanks for showing your blue filter.

I had someone send me a photo of their fruit recently. I remarked that I never saw that intense shade of red in my fruit of the same variety and asked them if I could get a cutting to try it out .
They owned up that it was photoshopped. :). 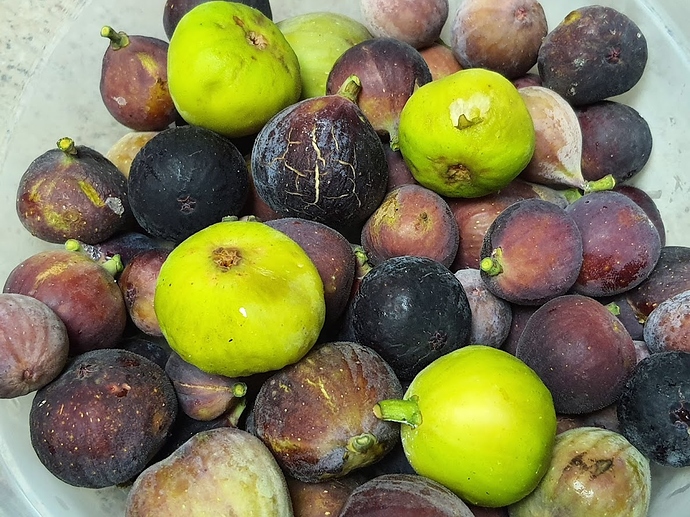 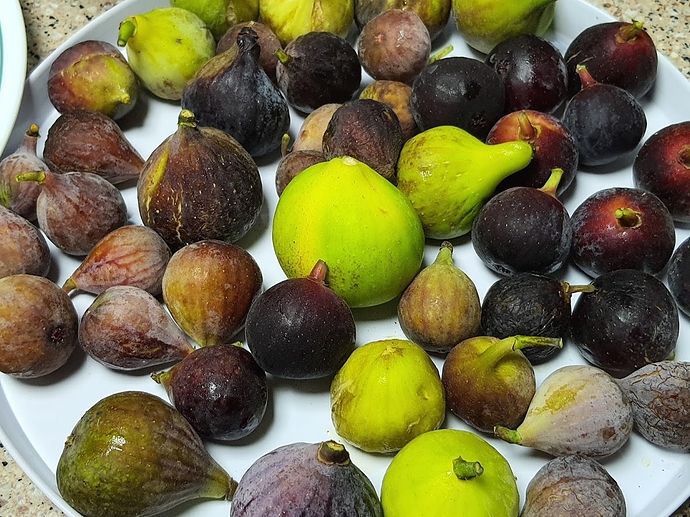 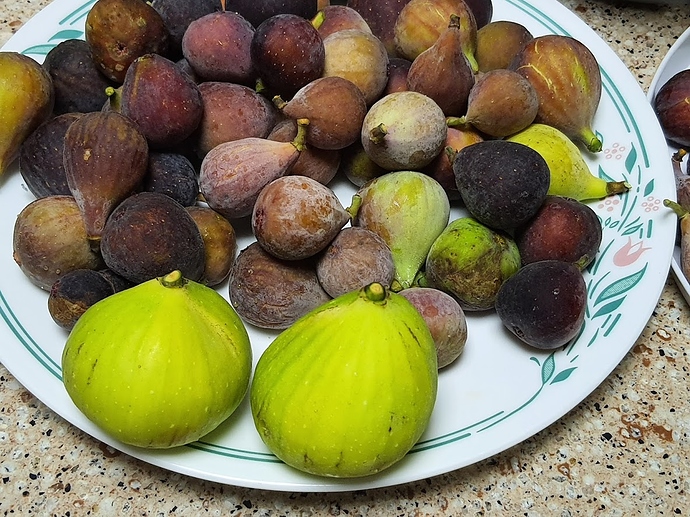 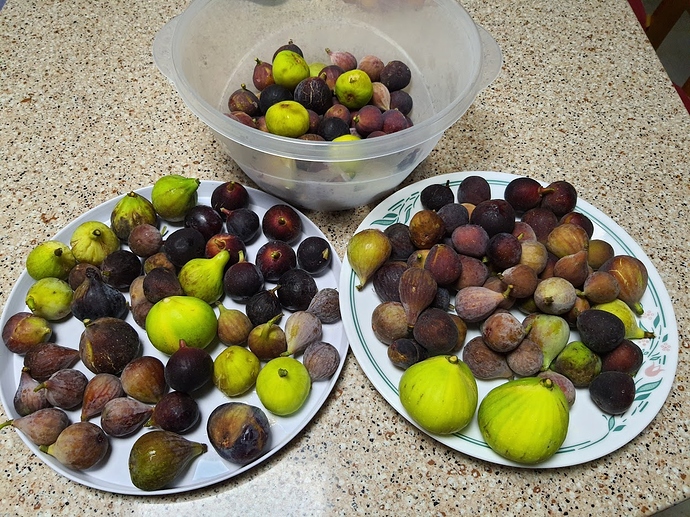 Wonder what filter makes the best looking figs. No wonder some of the fig flesh looks bloody red and some so dull looking. And they are the same variety.

Some figs actually look incredible inside. —especially when caprified (grown in CA) or grown in the right climate.
Pastiliere has the exact shade of blue that Brent posted above even without enhancement
But photoshopping also happens sometimes as I found out.

Pastiliere - tiny fruit on this year’s graft. The taste was rich with cherry flavor. I’m a bit confused now because that’s the description I read for Unk Pastiliere but that was only ok. Ideally UP is supposed to be much richer than P. May be next season’s tastings will be more reliable. 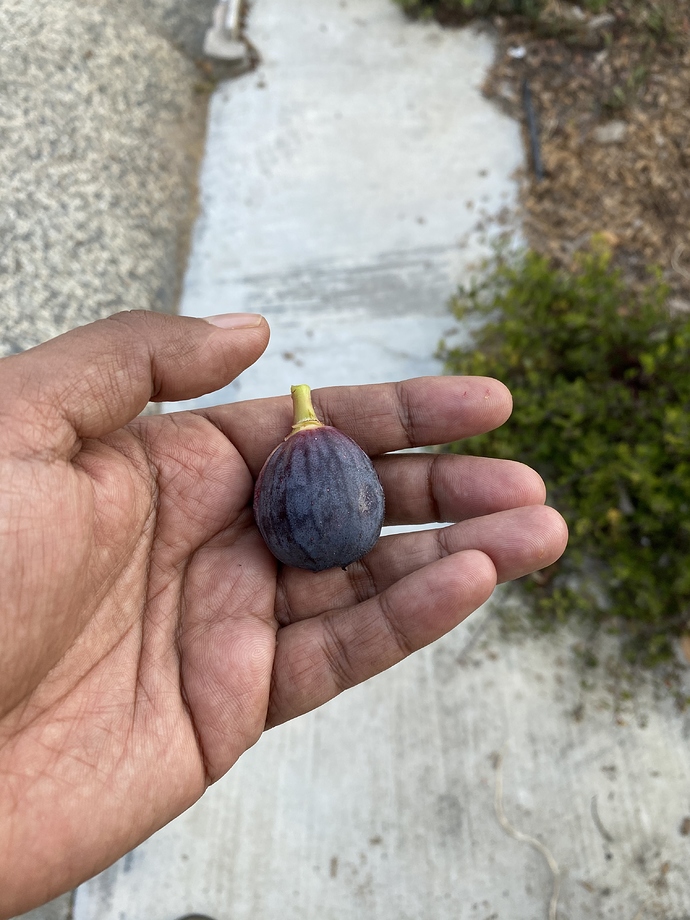 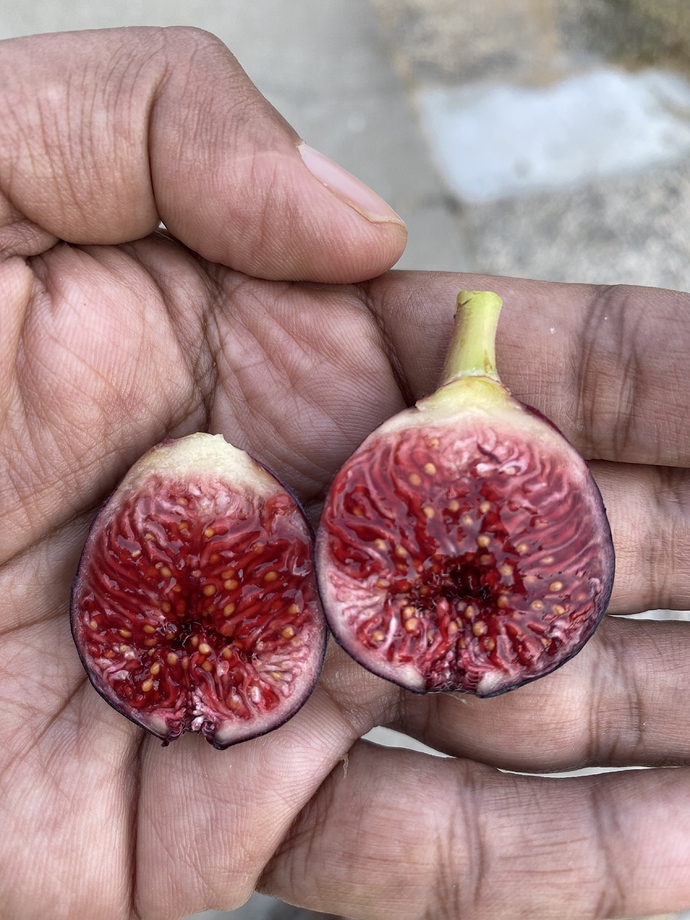 I don’t mean to start an argument with anyone, but I’m not convinced UP and Pastiliere are different. Seems like the reason people say they are is because UP is “confirmed” to require pollination. I was one of the people who participated in that, year after year my container tree dropped all fruit. 2 years ago I hand pollinated and got fruit, then last year a couple ripened without pollination and looked much like pictures of Pastilliere I see grown on the east coast. People say that Pastilliere is common, but just drops for several years and performs better in the ground. I have never tried UP in the ground, and don’t recall anyone on the east coast doing it either…

Recent research points to there not being a clear cut difference between common, San Pedro and Smyrna, a percentage of a Smyrna crop will ripen, some maybe more than others. The lowest percentage of fruit set among all Smyrna and San Pedro varieties when not pollinated was 10%. Just because a tree ripens fruit without pollination does not mean it does not “need” it.

With the prominent seeds I see there, I’m guessing your’s was pollinated. Notice they are lacking on unpollinated UP.
Pollinated UP 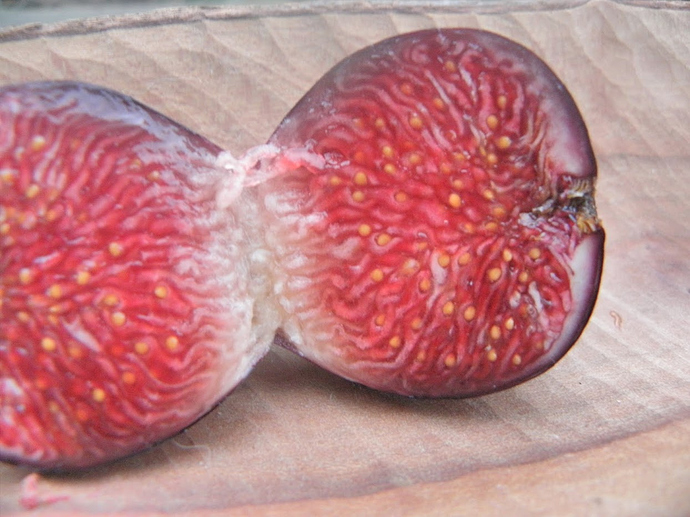 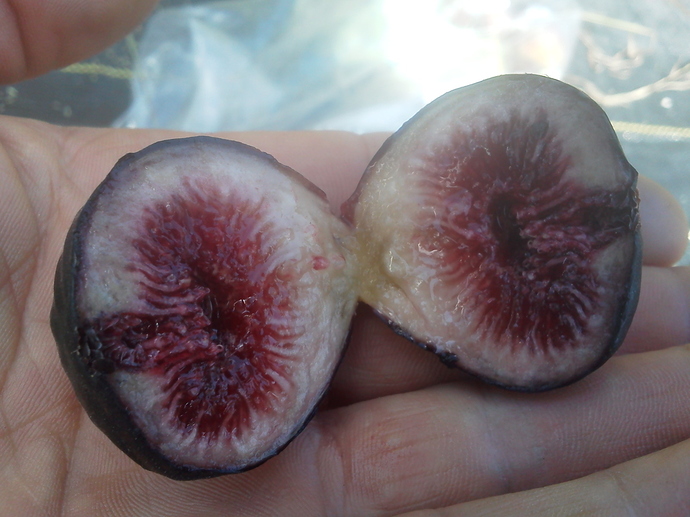 Believe me, I wish it were cut and dry. It gives me a lot more work to do sorting out seedlings. I do not wish to argue about it with anyone, here is the study.

I have never tried UP in the ground, and don’t recall anyone on the east coast doing it either…

I would like to tryout and planted in the ground to help finding out about it, but can’t help till I get my hands in some cuttings. Hopefully some day we can find out.

My tree is in pretty bad shape this year, I’ve been taking care of it just enough to keep it alive, in case I do more hand pollination, so I would not be the best source.

At any rate, you’d be setting yourself up for conflict. If you read through the threads on Pastiliere you will see that people who report their trees drop are largely pushed aside and told to wait another year.

I would not grow it based on the unpollinated fruit I got, although it has the potential to be very early, and looked pretty good the flavor was a pale comparison to the pollinated ones, not nearly as good as RdB or the etna types.

@fruitgrower has both varieties and his figs are reliably pollinated. I think his trees/grafts are older and in-ground. Based on what he told me, he found UP to be more rich and sweeter compared to Pastiliere. Jon can provide more details. 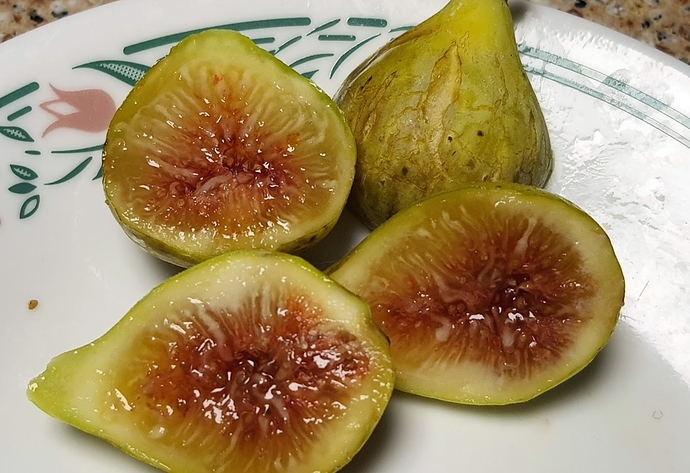 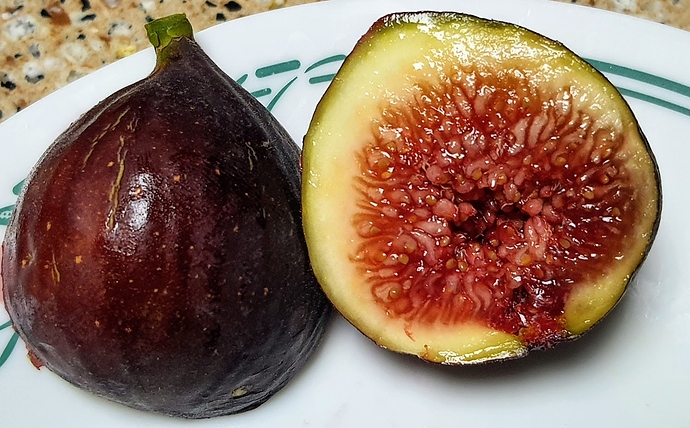 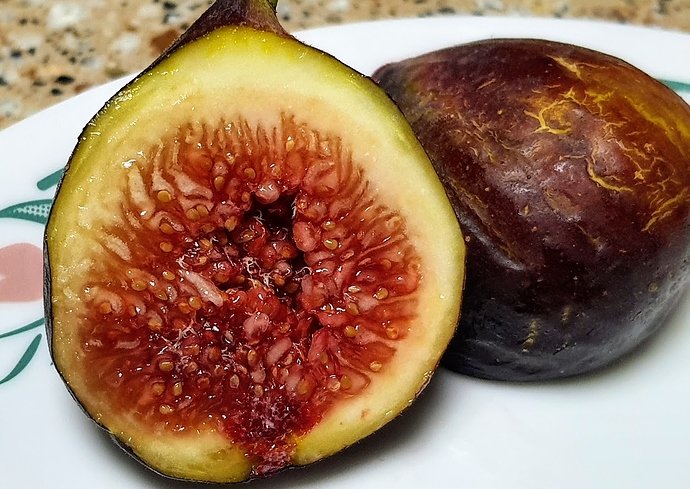 The rains have been ruining a lot of them but I still get plenty from my various Mt Etna trees. 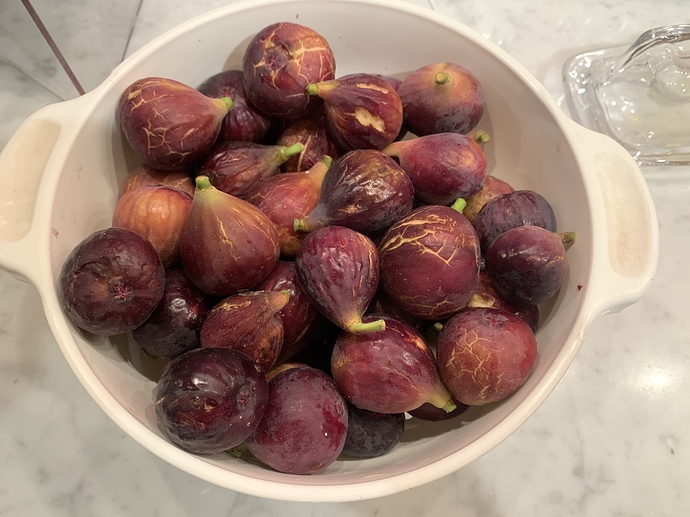 Yup. My RdB split the most. Others that did not split tasted diluted. We have had lot of rain these past two weeks including yesterday. 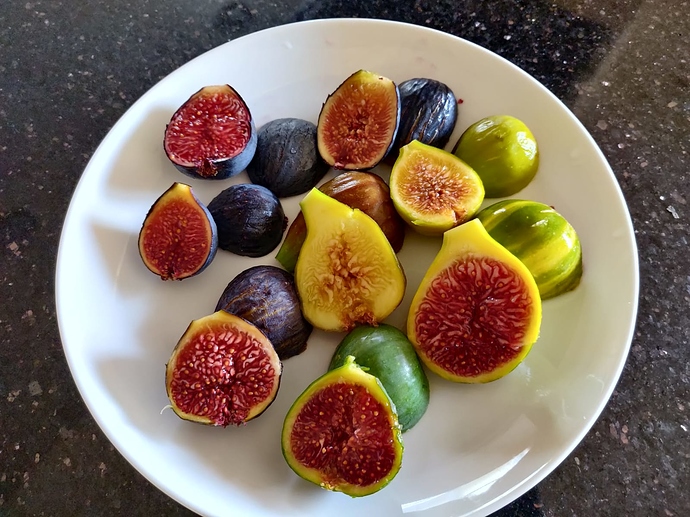