I have a six year old Haralson, about 12 ft tall, on antonovka, first crop 2 yrs ago, no blossoms last year. It’s healthy but put on very little growth–maybe 3". It’s said to be a naturally small tree so maybe that’s normal? I’m used to dealing with a lot of growth, not so little. I was looking at it today trying to decide how to prune it and I’m not sure what to do. I think I’ve read some discussion here that might answer my question but I couldn’t find it. Suggestions appreciated! 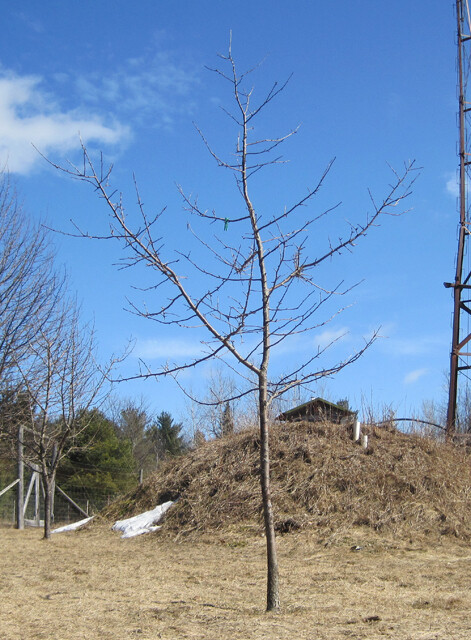 You have a nice looking tree as it is and you could be okay. For me I like a shorter tree so I would decide how high I wanted it and top it. If you have to avoid deer, pruning off the lower limbs might help. The limbs appear to be spaced well and less pruning most likely will hasten fruiting. Pruning is just not a one size fits all. I have several apple trees that I wish looked as good as yours is right now but just a little shorter. You will get more comments and I would consider mostly the size and shape you desire. Bill

Just another observation. The tree appears to be setting spurs now but it might just take a little longer.

I agree with Bill, but I’ll add that the one branch that reaches to the left of the picture is starting to look a little overly-competitive to me. I might consider cutting it back to the limb that is a little less than halfway up the branch. That’s not a very big limb- it looks somewhat directed towards the viewer in the picture, except that it angles upwards.

Your tree has nice branch angles and they are horizontal enough to encourage the tree to fruiting. I think it’s going to be fine.

By the way, I grafted a couple of Haralson to my frankentree and the grafts were quite slow in getting established. I think it’s a great apple, and I don’t hear much about it, but I love everything about it. It’s rated as susceptible to fireblight, though, so that’s a consideration.

A basic disclaimer: lots of people here are better as this than I (pruning has me a little buffaloed) so listen to them.

I have a Haralson on some unknown rootstock. My sister in law purchased the tree and all it said was dwarf rootstock. Tree grew very slow and runted out at 4’ and started bearing. I took the apples off and finally got it to 5’ tall. Tree is staked as
it was starting to lean. I found this variety to be very slow growing compared to others I have and definitely somewhat biennial bearing. Heavy crop one year and much lighter crop the next year.

After all this time, this little tree does produce a bushel of nice apples every other year for me. I thin them heavily so they are big as baseballs.

Patience is the best advise I can give you. Yours on antonovka rootstock looks mighty nice! It has to set fruit buds sometime with age. I wonder if branch bending to 45 degrees or lower would make it set fruit earlier? Just wondering since this works with trees grown in Tall Spindle system. I bent a few of my Honeycrisp branches on M7 by tying them down and they are load with fruit buds
compared to the branches nearby that I did not bend. Just a thought.

Thanks much for the comments and assurance.! You’re right that I just need to let it be as it wants to be and wait for it. It IS a nicely shaped tree–the only one I have that is! Most of the others seem to have a strongly independent streak as far as shape goes. Thankfully it is inside the fence so I don’t have to worry about deer. And I will shorten that left low branch and bring it into better balance. That really showed up in the photo.

I’m glad to hear Haralson is a slow grower for others. I won’t worry about mine now. I really liked the apples and am looking forward to another harvest, but I will definitely thin them next time. Maybe this year!