and thanks for all the useful info I’ve found here in the past.

I’m also new to grafting. I grafted about four or five apple trees this spring (end of January), all of them onto resprouts from the roots of old trees that had died in a wildfire several years ago. Some of the scion wood was from old but healthy trees on a neighbouring property (unidentified but I liked the apples), some was from cuttings from young nursery-bought Royal Gala and Granny Smith trees. I did a few different types of grafts – whip and tongue, bark grafts, and cleft grafts. Based on info I found mostly on this forum, I used electrical tape for all the grafts. To my delight and amazement, every single one took, and they are all looking healthy with many new shoots and leaves.

So now we come to my issue (sorry for the verbosity). I’ve been unsure about removing the tape, having seen (possibly on this forum) that removing electrical tape in the spring can damage the bark, but I’ve also been worrying about leaving it on too long, particularly since the days are getting very hot here now.
I’ve also been noticing some quite large swelling under the tape on some of the trees, making me think maybe getting the tape off could be a good idea.
Today I noticed the tape starting to peel off one of the trees, and so I decided to gently remove it all. It came off without doing much damage, but underneath I found that the swelling I mentioned is a softish white substance which is forming all around the graft union.
I am hoping this is normal / part of the healing process of the tree, but it’s not something I’ve seen in any pictures of new grafts online. I may have peeled off a bit of very think skin/bark off with the tape from some areas, but definitely not from the whole thing.
It also occurred to me it could be a fungus growing on the graft, particularly since the old dead stump of the original tree has some fungi of a similar colour and texture… but I’m hoping it’s not!

I attach several photos of the tree in question. [correction: the forum will only let me upload one photo. I’ll add more in the following posts.] It’s a “family apple tree”; four different varieties. Three bark grafts and one whip-and-tongue. The whip-and-tongue has the largest amount of this white secretion/growth.

I’m also wondering if the bark grafts are actually strong enough yet to be left unsupported… what do you think? 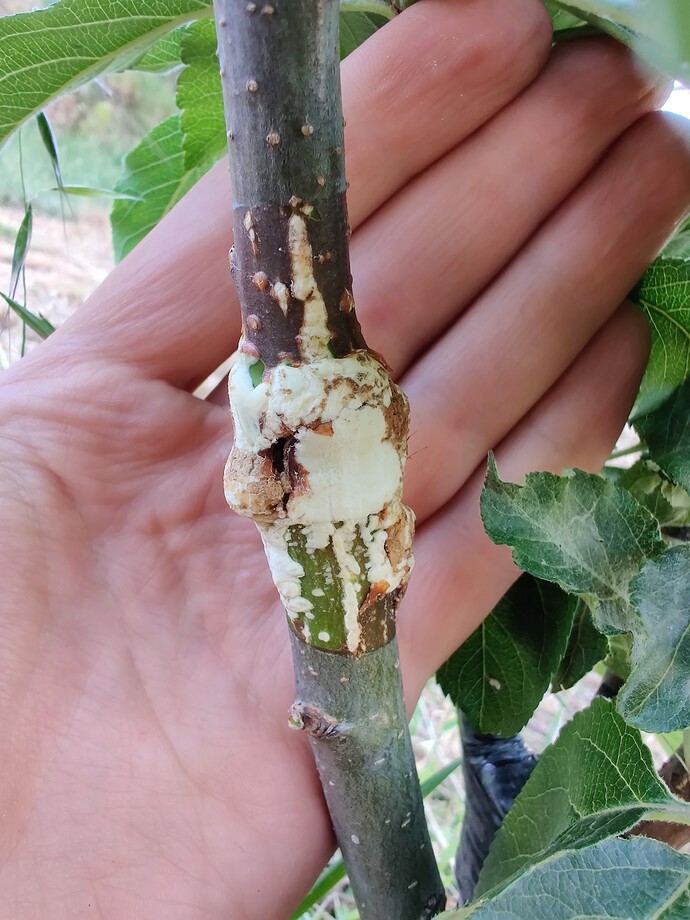 Here’s a shot of the whole tree; as you can see, the new growth looks healthy. 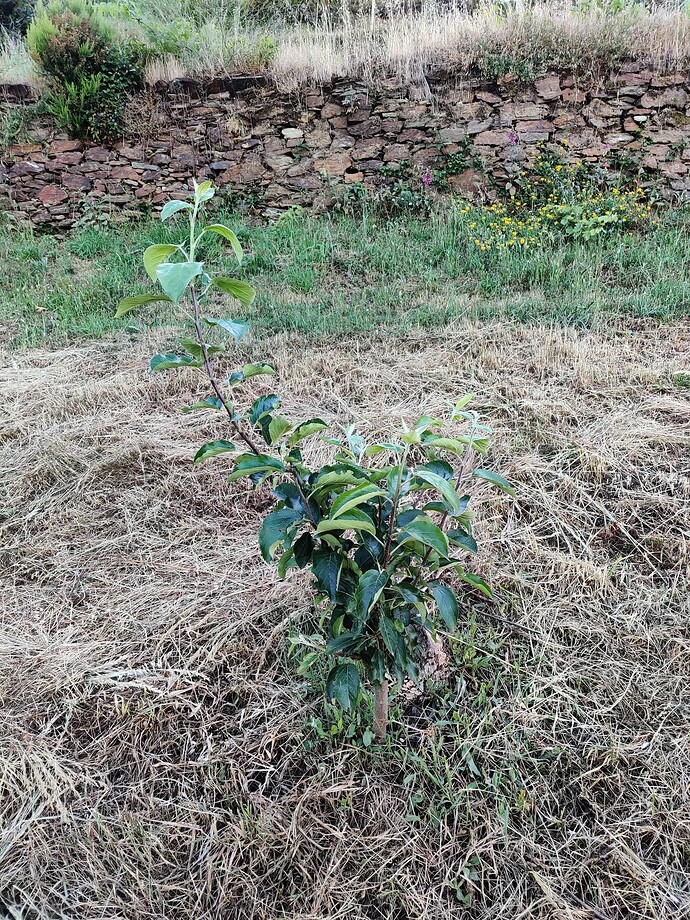 Here are the three bark grafts after unwrapping, from this angle they look ok to me but you can also see a bit of the white stuff on the left one.
I’m also thinking maybe I should protect the open wood of the top of the rootstock? 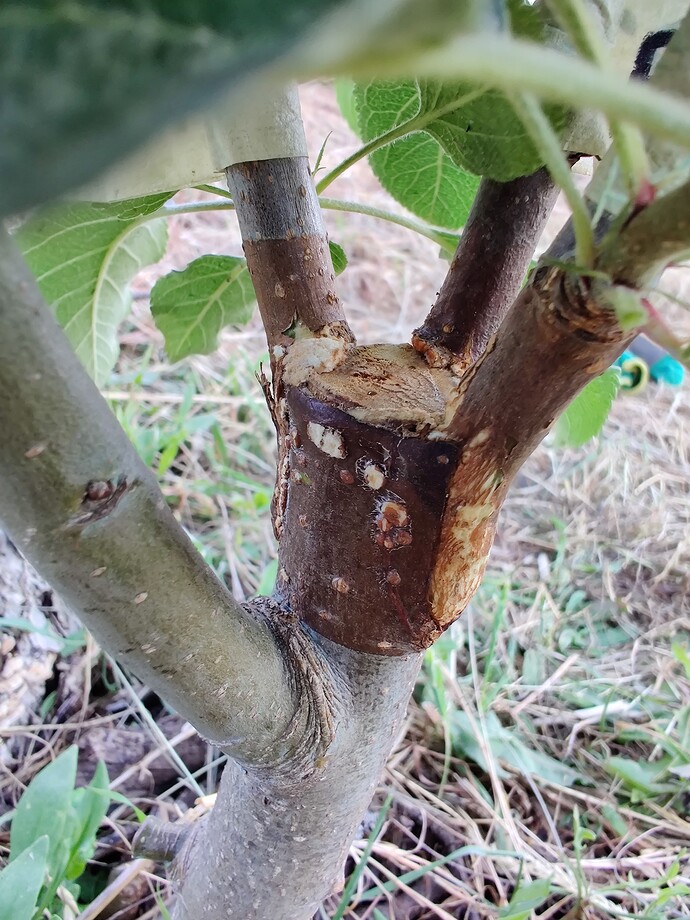 From this angle they look a bit more dodgy… 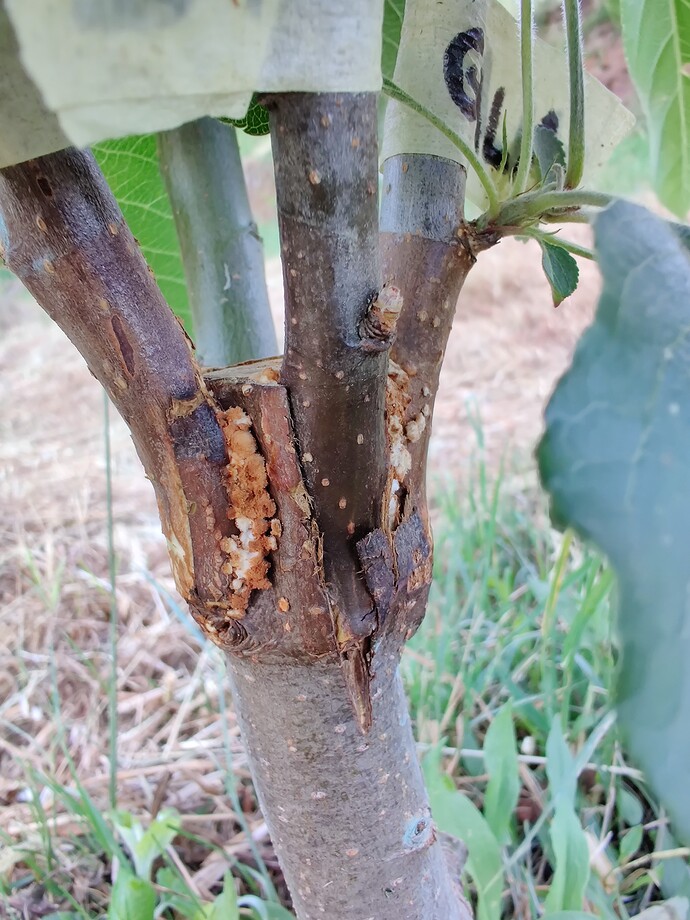 That’s callus tissue that the plant produces to fill the gap between scion and rootstock. So it’s normal and necessary but maybe doesn’t always show up to that extent. I might want to keep it lightly covered until it has time to harden up.

I’d also support the grafts so they don’t break out.

Nice work with the grafts and good luck with your trees.

And welcome to the forum…!!

As for supporting the grafts, do you have any good ideas for the best way to do that - maybe I should just put electrical tape back on for now…? Or I guess I could stake each branch individually.

It is best to stake the branches to keep them from moving to much in strong wind, etc… If you put in stakes taller than your grafts, any bird coming by will land on the stake instead of the graft which also protects it from them as well.

Maybe I’ll wrap it lightly with parafilm for now.

If you do more in the future, I’d suggest skipping the electrical tape, Parafilm for the win. Often times you don’t have to do anything to remove it, it will degrade on pace with the trees growth and fall away naturally. Sometimes if it’s being stubborn I’ll take a razor blade and lightly slit it once vertically and the tree will take care of the rest.Oh and no adhesive backing to stick to and potentially pull off any bark.

Welcome to the forum and good luck!

(* those are plum trees I grafted in early summer – a week ago – after the trees were in full leaf, so I fully expect them to fail, but that’s another story)

Welcome to the forum and good luck!

Thanks! I’m definitely going to be asking for a lot more advice so you’ll be seeing me around

If you put in stakes taller than your grafts, any bird coming by will land on the stake instead of the graft which also protects it from them as well.

I hadn’t thought about birds landing on them, that’s a very good point!