Sources for Rondom redcurrant? -- found it!

So, still no movement on the bud, but I just got off the phone with Lucille at Whitman farms to add to an order, and it turns out she has some Rondom bushes in stock! Even though it’s not listed on her website! So I added one of those as well. Hopefully, my cutting will pull through, but I should at least have the one bush!

Man, modern e-commerce has made me lazy. I’m glad I thought to ask.

I finally got my currant bushes! Now, I know the usual advice is to prune the bushes back to a few buds at planting, but I’d like to hear what the more experienced growers here do. @Drew51 @moose71 what are your thoughts? I already have them in the ground, but it’s definitely not too late to give them a haircut.

i probably wouldn’t go to a few buds but maybe take out a little wood from the branches that is damaged, long, or in undesirable places. unless the roots are small, then id cut it back a little more.

Yeah I never found a need to do so. I guess because the roots were compromised to remove some of the top growth to balance. Top growth supplies sugars, maybe to stimulate growth hormones a little can be removed. They can be slow to start or not! I finally bought a Jonkheer Van Tets. I tried twice to root it and failed. It was I think not the best quality cuttings, or I waited too long to plant. Anyway I didn’t prune it was already a stump when it arrived. It has quickly leafed out! So I have Rovada, Tets, and I think one called Perfection. It was a gift. I got rid of London Market and one other as both were hard to harvest, and I wanted to put other plants that work well in their location which both were prime locations. 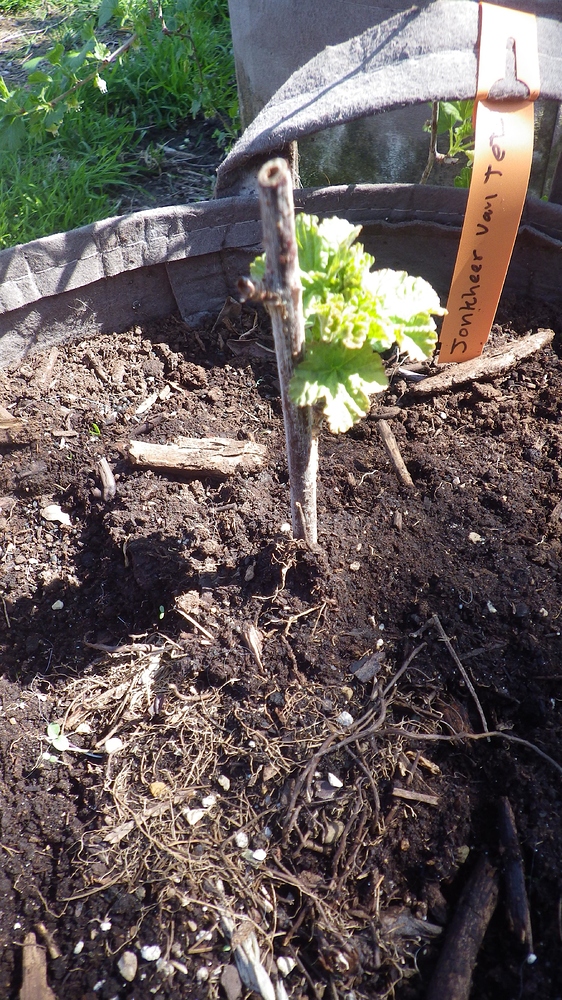 @moose71 @Drew51 thanks for the input. I guess I’ll prune the black and the white currants down a bit, as they are pretty tall, and the black’s root system was cut back the most out of all of them. Whitman Farms sends nice big plants!

Yeah a good place. I have to place another order next year. This stump was from Indiana Berry. Which is fine with me, it’s alive they grow fast enough. I have patience anyway. I’m just filling little holes in my garden, I have so much, I’m fine tuning the fruit to meet my needs these days. I’m going to get a record amount of black currants this year. The Honeyberries are setting fruit very well. Everything looks awesome this year. I should get massive amounts of pluots and plums this year. many tasting for the first time.

thats great Drew! i should get a good amount of blacks this year as well and i stuck cuttings all over the place last week so once they grow out i should be up to my ears with them as well. not a bad thing for sure!my wife tried the jam for the 1st time last year and loved it! then i gave her the berry. she couldn’t believe the jam came from such a nasty berry. that was consort.

I’ve been on Whitmans site but never ordered from them. i guess i should.

she couldn’t believe the jam came from such a nasty berry. that was consort

LOL! Yeah Consort has the classic taste. I was surprised too that my wife loved the syrup! We just had some Saturday night. I have one bottle left. We mixed with soda and vodka. She said it was the best syrup I make. I’m a little more fond of raspberry, although it’s my favorite fruit. So one would expect me to like it! She liked the smell of the berries, but I didn’t make her taste them. I thought she would hate it. She likes honeyberries too. She is a fan of all dark berries. Blueberries being her favorite. She also loves strawberries too. Strawberries can vary in taste too, Alpine, pineberry, musk, Strasberry, Gariguette, etc. 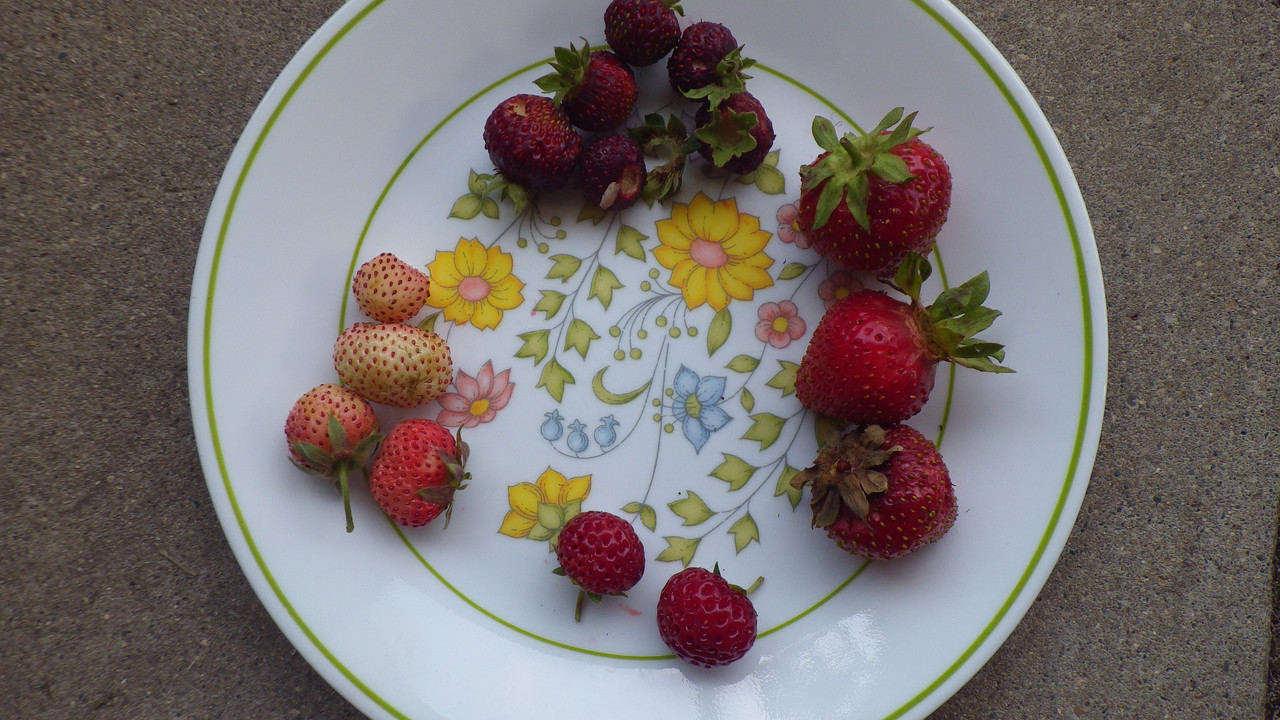 Yes, really nice 2 year bare root plants. 4 of them for $49 shipped. Lucille has some things “off menu,” so don’t be afraid to ask. She had also recommended Viking red currant when I asked about Rondom, but I didn’t get it because it’s not on my state approved list.

my little perfection red was very slow to start also and it wasn’t a cutting. seems the reds aren’t as vigorous as the blacks. was your rovada vigorous?

No. They are slower, and take time to get big. And yes not as big as the blacks. Seems the two species are quite different. When babied they can grow better. More sensitive to stress and often stall. I think mine is about 5 years old now and it grows much better. They are though very productive even when small.
Here is a mature white, if you look close you can see it will out produce most blacks, and it’s a decent size! 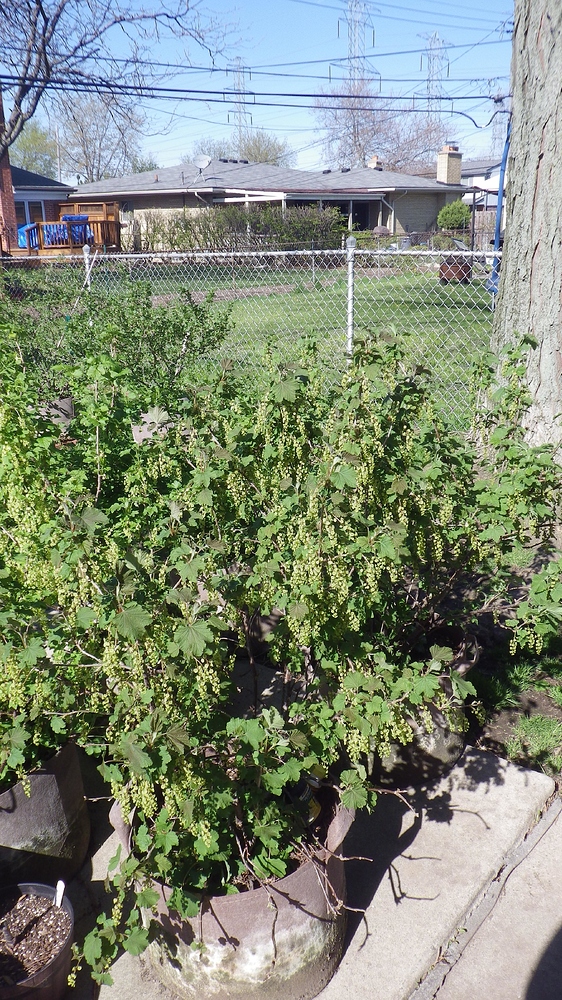 The plants blend into one another and look bigger, let me separate this plant.
Oh this is Primus White
North to south 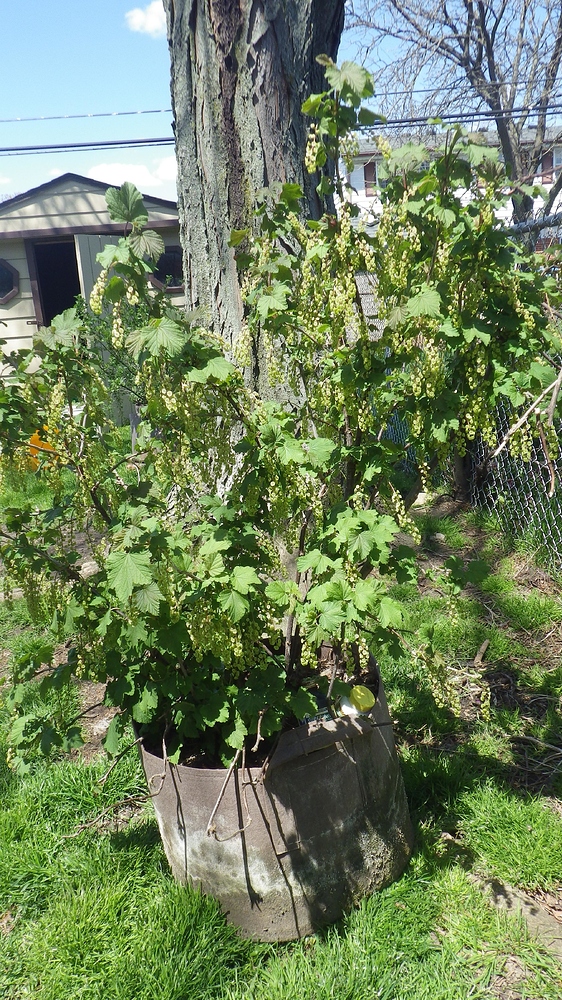 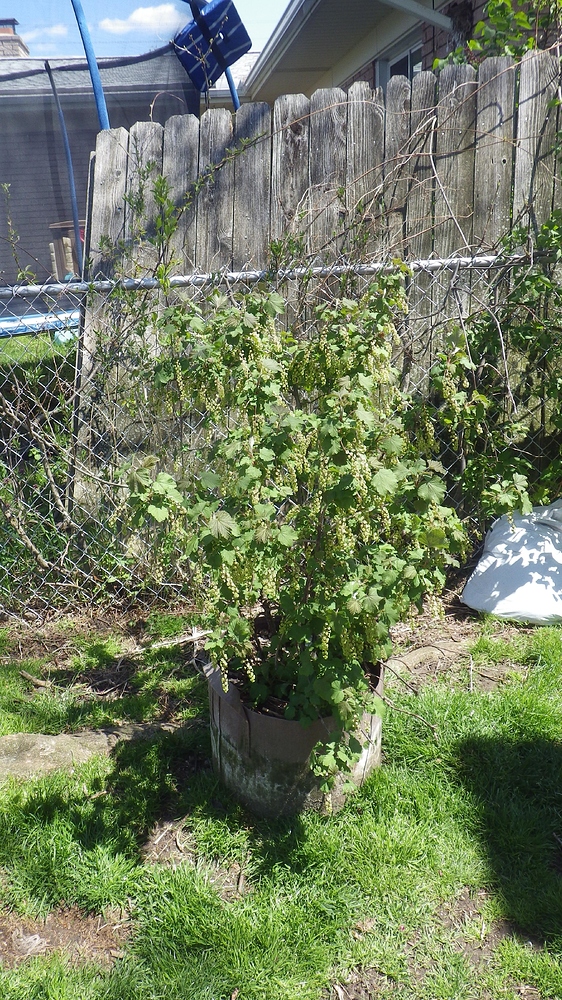 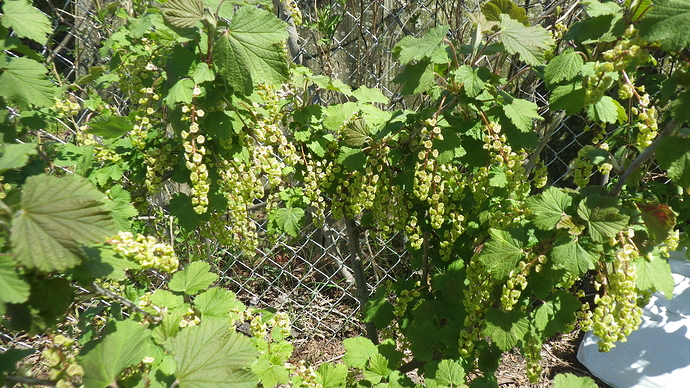 That’s good to know. I think I’m going to try and order a few from her next year.

Looks great! Regarding vigor, I found a 2005 Cornell bulletin on growing currants and gooseberries. In it, they describe how they found that it’s really helpful to have high N levels during establishment for red currant, even if a soil test shows it to be adequate:

Red currant plants (one year old) started out the season green and vigorous, but after about a month of growing began to show yellowing and a lack of vigor. Fifty pounds of actual nitrogen per acre were applied (injected through the irrigation system) in May of two consecutive years, When no significant change in vigor or yellowing occurred, this was followed up with two additional 50 pound applications, one in June and one in July. The plants greened up and put on 1-2 feet of nicely branched, new shoot growth. No branching occurred in the first year. The approach for the first year was to be conservative with fertilizer applications because a soil test on the site showed that nutrients were plentiful. If the plants were to be grown as bushes for mechanical harvesting, this approach might have been useful as a way to check excess plant vigor. Mistakenly, it was thought that restricting growth to a few branches would invigorate them sufficiently. But this was not the case. In a consultation with Adri Van Eck, he stressed that a heavy fertilization program in the first years when plants are established is important. It is also important not to set fruit during the first one to two growing seasons as the plants become established.

It doesn’t sound like you have yellowing issues, but I do find it interesting.

Do you bring your pots somewhere for the winter, or leave them outside?

I leave them where they are. Currants, honeyberries or black raspberries. 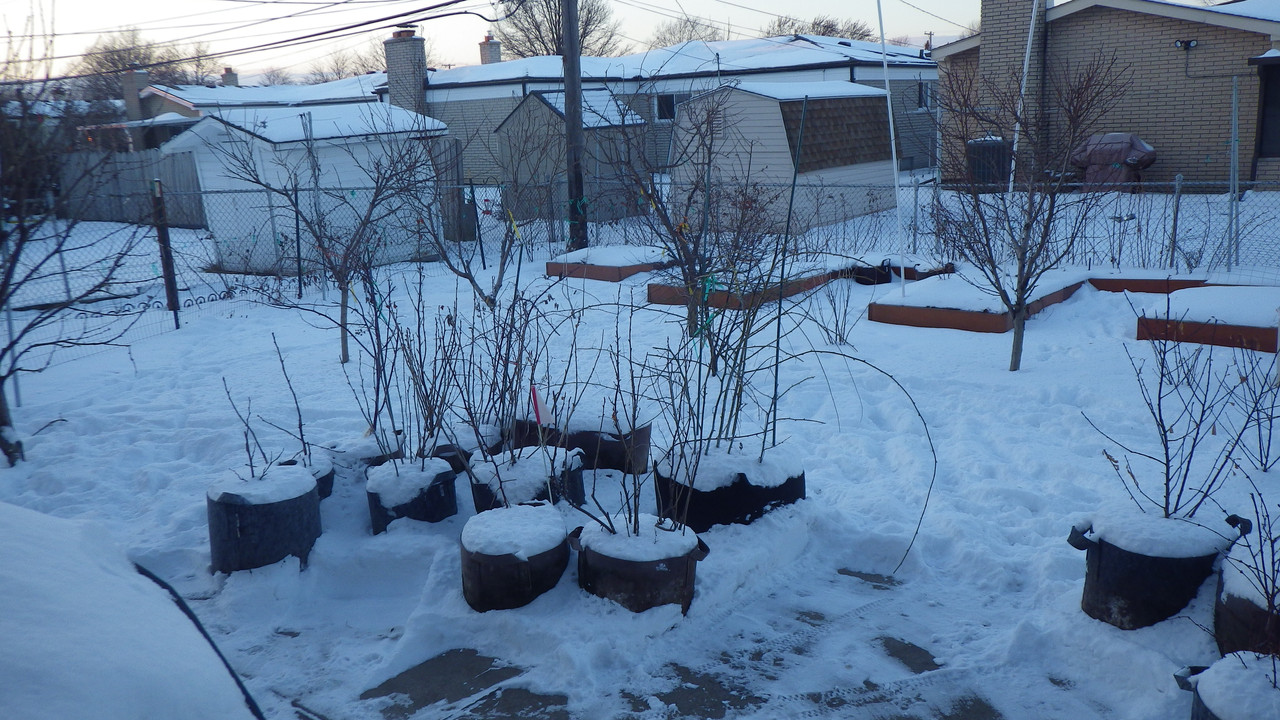 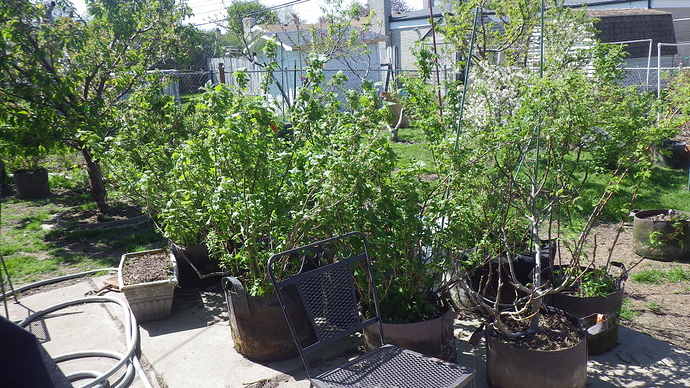 good to know. i have a primus coming.

i have a primus coming.

They are very pretty. I plan to make a cordon, but I’m just rooting some cuttings this year. So it will take about 5 years to form it. A long process!

Drew, Why do you grow them in containers? Looks like you have the room to put them in ground.

Drew, Why do you grow them in containers?

I like to trial them first. I need to leave room for my dogs too. I do have 12 in ground. Mostly black, 2 reds a white and a pink.