I’ve used woodchip and clean sawdust as mulch in the past but have trouble getting them for free lately. ( no chipdrop here and the local tree guys haven’t come through for me in a year+)
There is a cannabis grower across the street who throws out tons of used growing medium. ( coir or peat moss, not sure)
Is there any reason I couldn’t use it as mulch? I love the idea of it being free and easy!

Me to. Probably would be good stuff.

I’d probably want to inquire about pesticide use first, but can’t think of any other problem with your idea.

Definitely check on pesticide use, as I understand cannabis cultivation often uses a TON of pesticides.

So we are all just going to act like having a pot farm across the street is perfectly normal? haha. I’ m open minded and I’m sure its well regulated and secure and no problem, may even offer benefits such as organic material for mulch, Yet as someone who lives in a state where possession of even a seed or stem is still illegal, its kind of funny to see everyone discussing a cannabis growing operation the same way we would a tomato growing facility! That is a good thing I think, just a little unusual to me! Carry on my friends!

Our Senator Rand Paul worked to get hemp legal in Kentucky. (It’s not got enough drug in it to make anyone high unless they smoked a ton of it.) I don’t believe Kentucky’ll make the other kind legal…but you never know. 80 years ago farmers grew hemp similar to growing tobacco, and the government bought the crop!

I’m in Canada so it’s sorta legal here. ( not that this specific grow op actually is.)
There are tons of fully legal ones around so I’m hopeful that I can find one that will let me take it away for free.

I can’t speak to the other Cannabis, but when we grew CBD/floral hemp, in 2019, there were NO pesticides, herbicides, or fungicides approved for use on the crop.
We did use Bt, off-label, for an infestation of caterpillars, but nothing else on the plants themselves.
We worked in the greenhouses with the folks growing our hemp clones…the used a lot of Pro-Mix type potting mix for their ‘mother’ plants, and dumped it in a pile when discarding excess plants. As far as I could see, it was still useful as a potting mix. Not sure how useful it would be as a mulch.

as I understand cannabis cultivation often uses a TON of pesticides.

I grow some outside. only 3 crops so far. Never used any pesticide. I had some bud rot last year from the heavy rains, so plan to see if I can use Lime sulfur which one would not have any concern about. Most here grow inside, not sure why you would need anything except for mites, and they do smoke this stuff so I would think pesticides would be a concern for dispensaries. It’s legal here (recreational). I just grow it, I’m not a consumer. It helps pay for my garden. I’m allowed to grow 12 plants, I usually grow 50! Just kidding I grow 3-5 plants. I probably will stop soon as the pros grow better pot than I can. I don’t get a good price. I’m trying to breed a strain that works better outside here. I’m getting there! 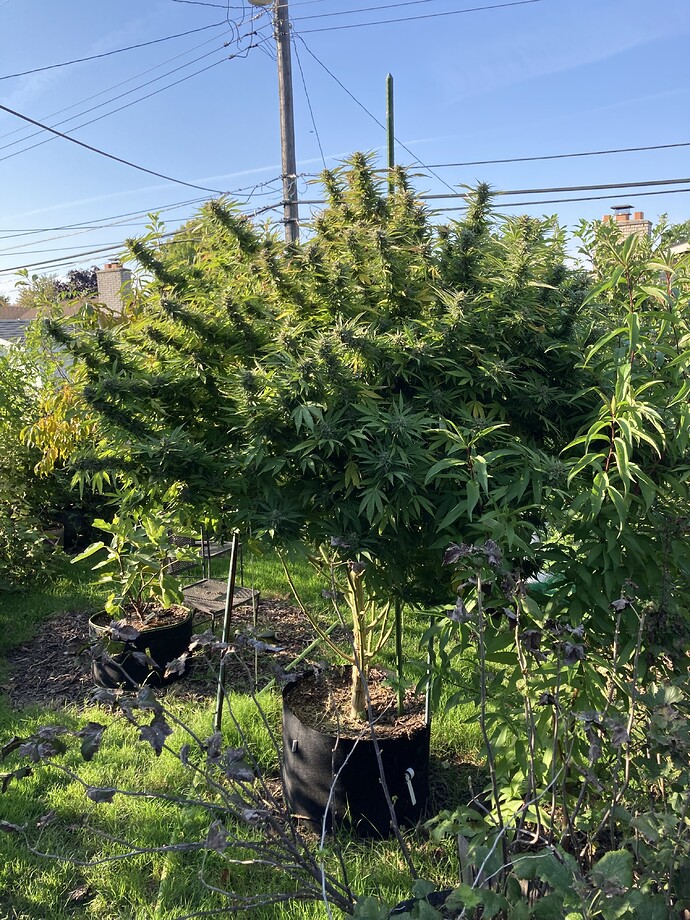 So we are all just going to act like having a pot farm across the street is perfectly normal?

When I was college for horticulture everyone joked with me that I was going to grow pot. Nothing in the education or industry had anything to do with it, except for some suggestive retail products like potting soil and fertilizer. Now I get wholesale catalogs with new and improved cannabis grow programs on the cover like they are mums or petunias. Things changed quickly! A lot of money at play, at least if you are selling the growing supplies! It’s like the gold rush, you want to be the one selling shovels.

quite the opposite. matter of fact they test it and if pesticide residue is found the whole batch is dumped. no one wants pesticide in something you smoke. id say its safe as a mulch.

no one wants pesticide in something you smoke. id say its safe as a mulch

I believe that sometimes soil drenches are used to combat larval stages of pests in lieu of foliar sprays, for that reason. Especially if this is a “gray market” operation, I’d inquire to be safe.

I just checked my state’s regulations and I won’t be legal to grow until next summer. Even then, it’s indoor only. This means your house gets stinky which means it’s 100% not gonna happen in this home.

Exactly why I grow outside. I’m not investing in the equipment needed to remove smell. It’s just for fun not a business.

I haven’t touched the stuff in close to 20 years, just don’t see the point. If I could grow outside I definitely would have to consider it. Your state might have the most liberal pot laws in the country. 12 plants is quite a lot.

in Maine they allow 6 mature plants per person. 6 juvenile plants 24 - 36’’ plus unlimited seedlings. also allowed 6 mature plants worth of processed pot on premises per person besides the ones you got growing. but only allowed 1oz. on person while in a vehicle. dont understand the last part. just about every other house has their own garden peeking over the fences by aug…

Canada regulates it through the government like booze. they leave no ‘‘gray’’ areas.

We can have 2.5 ounces in public. 10 ounces at home besides any harvest from the 12 plants. Also at home up to 15 grams of concentrate.

The OP said this operation may not be operating with a license:

it’s sorta legal here. ( not that this specific grow op actually is.)

Yeah, the guy across the street has been growing and selling for much longer than it’s been legal and I’m very sure he’s got way more plants than are presently allowed.
I’d always thought that living near a drug dealer would be a problem but there haven’t been any issues. ( I wouldn’t have even known except he kept trying to give me starter plants when I was doing some custom framing for him. Not the kind of growing I’m into!)