OK this is my first attempt to show some photos so bear with me.

I was thinning fruit today in my orchard and in the process I did some pruning to get lots of light on the spur wood when it still does some good as far as encouraging annual bearing. More light on the spur leaves should help keep their energy bank account full.

Unfortunately the photos do a poor job of really showing the trees, but they show something. I also threw in in a photo of a tree on one of the estates I manage of a crab being converted to a useful apple. After seeing it in bloom I think I will keep a fair amount of crab on it. 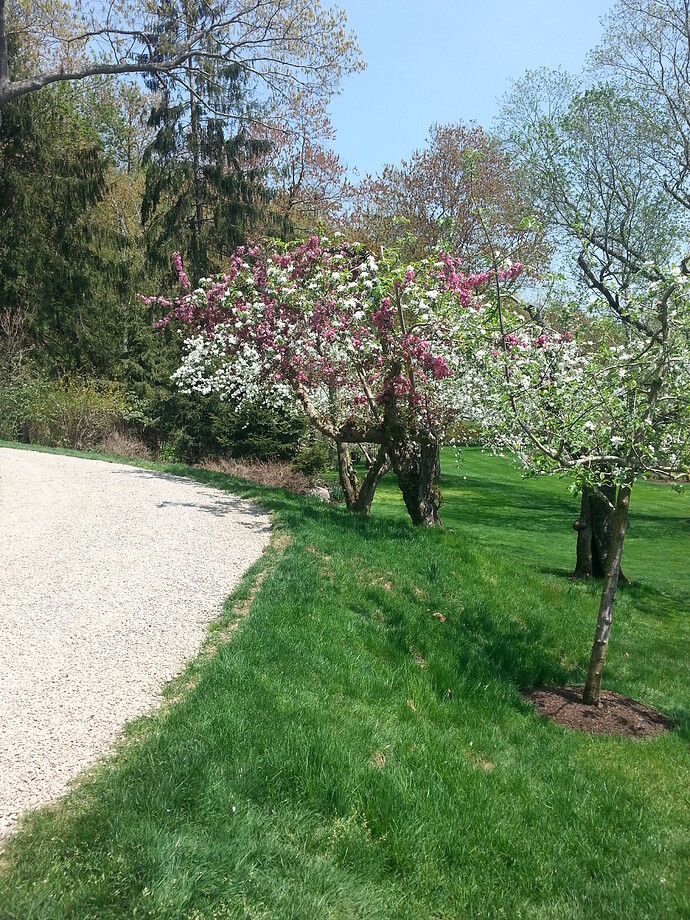 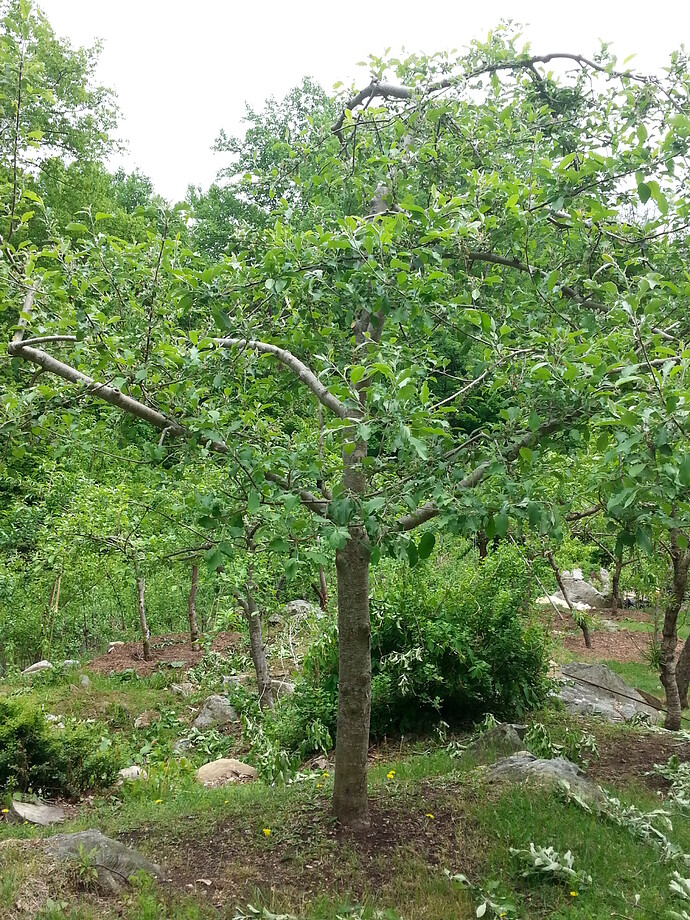 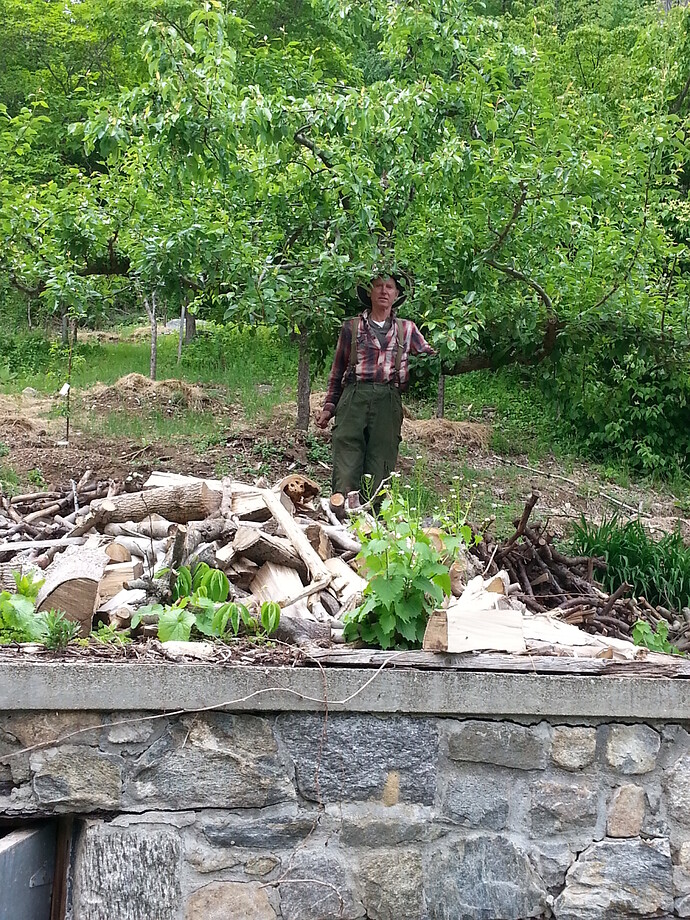 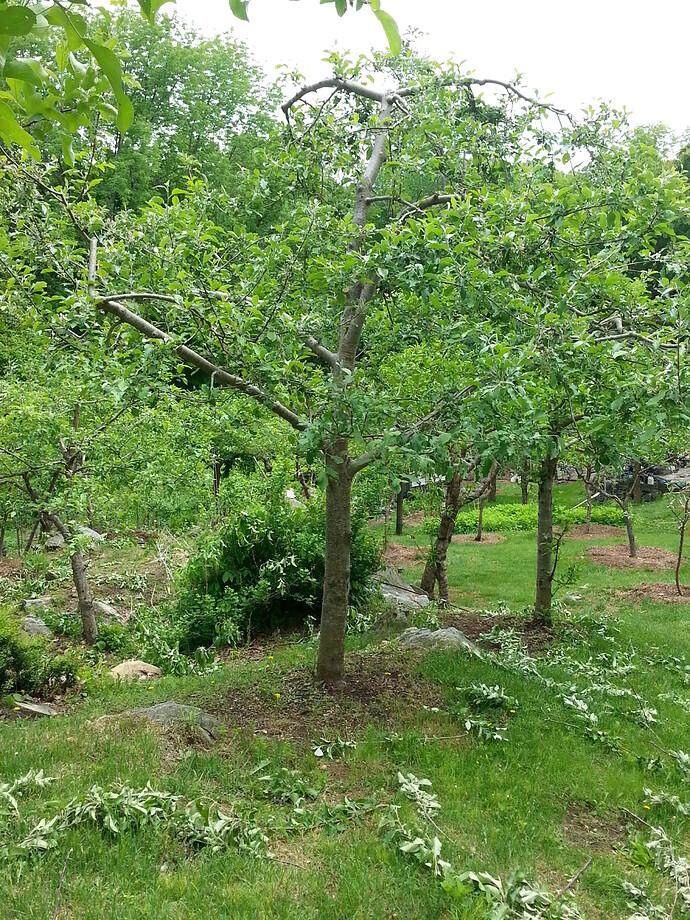 Why do you “keep a fair amount of crab on it”? Because of its blooms color?

Being able to work outside, especially on a nice dry and warm day is a luxury! I would love to have that option.

Thanks Alan,
I like that the apple and crab blooms are on the same bloom schedule. Your orchard photos encourage me to prune more aggressively. My idea of thinning fruit was more along the lines of snipping flower clusters and vertical spurs and a follow-up on individual fruits. You probably thinned a lot of fruit just in the process of opening up the interior of the trees. Judging by the make-up of your woodpile, some big old wood removals have occurred as well. Are those mostly surface rocks in the photos or do they run deep? They don’t seem to be slowing down the trees. Or do they?
Art

AF, most of what I removed was on the big wood and didn’t contain spurs. I also rubbed off the beginnings of the annual water sprout barrage. I didn’t prune anything around the spur wood I’m keeping because I need it to feed the apples or to make replacement spurs. Unfortunately, the photos do a poor job of really showing the form of the trees.

Going by the book, trees like this are not pruned in the spring, mostly because it all will grow back by mid-summer, but that’s fine with me. If I waited for the terminal buds to set (till it was past the point of vigorous regrowth) it would be too late to really serve the spur wood. The trees would certainly already be set on whether or not they set a full crop next year.

The pruning just takes a few minutes, it’s the thinning that sucks time. And just plain sucks, after a few hours of it.

The wood is a little I had left over from my fire wood stash. I keep a woodburner going 24-7 during the cool months. Those pieces are from trees I took form my own property as I expand my nursery. I also burn a lot of fruit wood from trees I manage.

The rocks are what you usually get a lot of in New England if it isn’t bottom land or some kind of farm land. By the standards of my county I have lots of soil with those rocks and huge trees can find ballast and nourishment on my land and nearby. Much of my county when trees get to a certain height they fall over.

Tom, that crab I’m changing over is on an estate where crazy money is spent on acres of manicured landscape. When I change a tree over I do it gradually so trees don’t ever look like a butchered mess. I happened to come by when it was in bloom and realized how beautiful it was with dual blossoms (once again, the photo simply doesn’t show it well).

The apple part of the tree is harvesting the vast majority of light so why not leave some of the spectacular red flowering wood? They are already harvesting enough fruit for a small village from other trees anyway. They make gift baskets of fruit to give away to family and friends throughout the harvest season. I love my customers that put most of their fruit to use.

Thanks for posting the pictures Alan. The old saying that a picture is worth a thousand words is true. Going forward I hope to improve my pruning skills.

Beautiful! I like that your orchard just looks so natural. A natural landscape that is both beautiful and produces by design.
Mike

Thank you both. Maybe this evening when the light is right I’ll take some pictures from the roof of my house so one can actually see the layout and lay of the land.

Alan,
The picture is very helpful. Thank you.

I hope when you have time and a camera ready, you will snap the before and after pictures for us to see.

Wow, very cool. I could definitely enjoy walking around there in the mornings with my coffee in hand.

Alan, you are in a jungle of trees, how lovely! Cannot wait to see your trees with apples. Please take more pictures. They are great! Many rocks. Wow, Mrs. G

Mrs. G. so nice to “hear” from you. How are you doing? Did you get your trees covered somehow?

I also rubbed off the beginnings of the annual water sprout barrage.

Do you see any issue with creating an opening or “wound” that may allow in bacteria or viruses when rubbing off these shoots. I’m constantly doing this, but I’ve always wondered about that. I try to do it right before I spray so as to at least get some fungicide on the rubbed off bits. I doubt it does any good, but always wondered about it.

How do you address water sprouts on Japanese plums. Mine send up water sprouts by the hundreds (literally) and it seems there is simply no controlling them. I thought maybe too much fertilizer might be the problem, so I ceased fertilizing them. It’s now been 13 months since they were fertilized and if anything, the problem seems to have gotten worse. I will say that I’ve seen no real negative effects from them being there, but now they are really getting out of hand. I see photos from others and they don’t seem to have this problem.

Appleseed, the only issue with rubbing off sprouts is that they come back when you remove them in the spring or if fire blight is a obviously in the mix- the wounds are smaller than if you let them go and prune them later.

I don’t know what to say about your rampant vegetative growth, but you probably don’t need to ever provide supplementary N for your plum trees. I usually prune plums at least once during the summer at sites I manage. The shade and cover has to encourage brown rot and probably reduces brix at least to some extent.

Working on netting the trees now. What work! And… . . its like a steambath outside!

Working on netting the trees now. What work! And… . . its like a steambath outside!

I thought the coastal winds would keep things kinda cool there Mrs.G. When I go to Cape Hatteras even when hot it seems so much cooler. (??)
If you really want a steambath you should come here…no wind and just miserably hot with terrible humidity. You break a bad sweat tying your shoes.

The Washington DC area is about the worst place on the east coast, come late July and August, I thought NYC was bad until we started competing in the National Capital BBQ Battle in DC, Oi Vey the humidity.

In the evening a light breeze comes in usually a Southerly. But come July and August our weather is very steamy, then foggy. Great for mold!