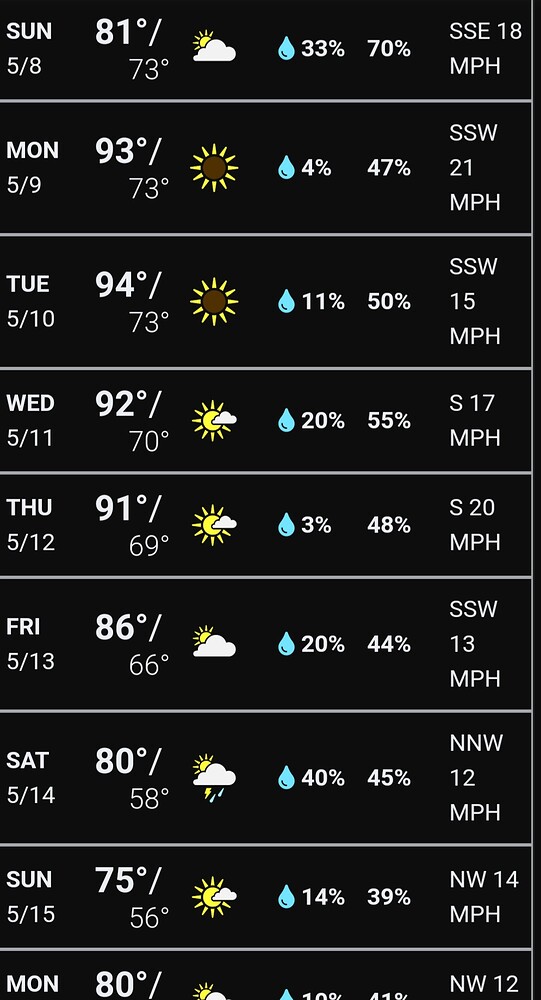 We’re showing a low of 35 F today (it’s 41 right now) with a slight chance of snow, widespread frost tomorrow. It’s just a bit late for this kind of weather. Highs in the low 60’s this week - so a little early to be planting beans and setting out tomatoes.

I’ve had rain for already 2 days, today’s it’s like 55 and cloudy. A nasty storm on the east coast if I had to be honest. Next week seems to be dry and really warm reaching the 80’s in some days.

might even hit 80 here. rare but last year we hit 80 in april for a few days. that is very strange.

Yeah this yeah seems cooler for some reason, it’s already may. The temps were supposed to surpass 80 on forecast a few days ago but now are hardly reaching 80

We were struggling to get above 60 for most of April. Farmers are very late getting into the ground because soil temps have been too cold. Next week we have the same temps: upper 80’s. Neither shade or fruit trees even have leaves!

I’m a little worried about grafts I did about 2-3 weeks ago. Will I need to cover them in foil to try and keep them out of the sun or have they had enough time where I shouldn’t worry?

That’s what it’s doing here swinging 30s to 90s in a week and it’s not ideal. We will make do with what we get.

Generally speaking we have snow from late October (right before Halloween or on Halloween) to May. In 2020 we had a snow in September but no snow until November that year after. Last year we had a somewhat later snow on mothers day on the 13th I believe but we did not have any snow until December or January. This spring we has snows until March but we have not has snow since. Our apple trees and cherry trees have been flowering since April. Our peach flowers just fell off the trees so are done flowering. The pear tree on the path below us we walk on was flowering a month ago and has stopped. It is only May 8th. The only trees left in my yard to come out of dormancy is a peach shipped to me this year in January, the peach hybrids shipped to me in April, my bare root almond tree shipped to me in April, a few bare root pear trees just shipped to me and my 3 in 1 peach/nectarine trees. My paw paw trees has one not leafed out but all 4 got destroyed by some kind of animal so they are in the trash now. That really just tells me everything is out but a few peaches/nectarines and maybe some pears and almonds if they did not come out last year. Last year our cherry trees did not come out until late May. The low is supposed to be in the 40s this week.

Portland OR just finished April 2022 as wettest (nearly 6") April since records began 1938.
April was the coldest of any month (for below average temperatures) going back nearly 3 years (Feb 2019). Also first April snow ever recorded, and that was at mid-month.

cherries. apricot are green tip. currants just started to leaf out. honeyberries are sparsely leafing no blooms yet… everything is a week to 10 days late. the deep frost from last winters still in shaded areas. the warm up midweek should get things going good.

The Weather Channel is calling for 25 degrees for me tonight in Northern Virginia. All my trees have fruit on them. Are they all doomed or can the fruit with stand those temperatures? (Plum, peach, apple, pear)

Are in the mountains? I am in northern NJ and I believe it’s going to be 40.

I’m in the Shenandoah valley of Virginia and they are predicting 38. For me that’s about 36. I think I am good at that temp. I did cover my tomatoes and a few annuals.

Added note:. I do see where your temps are predicted lower than mine. I never would had expected that from northern Virginia.

Late December too hot. But, other than that, I’m ok on this spring.
Started out long sleeve shirt, ended up in a t-shirt.
Upper 60’s.

Sorry for the late response, and thanks for your reply.

I’m near Front Royal and they were forecasting lows of 23 on monday morning and I have the screen shots to prove it!!! But according to the Weather Channel app (I wasn’t there at the time) it only got down to 35. I don’t know how they got the forecast 12 degrees off in less than 24 hours ahead of time but that’s what happened. Very strange, but a welcome problem!

Yes this kind of heat and humidity is usually here around the middle of July. I think it’s going to be a nasty summer.

last 3 years it’s warm too early, everything blooms, then we get late freezes. it’s not impossible to happen but it’s been on my mind since last year’s heat dome/total instability of the weather. predicting even a few days out of getting more difficult every year.

32 degrees this morning on the Acurite display. Sensor is 7 feet above ground.
Official PDX record low is 37 for the date.