Sundowner ....and some other Apples....shooting for Central Leader type

Was wondering if I should prune this guy? Cut the limbs back by 1/3? Do I cut the leader down as well? Tree was planted January 2016 on M7 rootstock. Was hoping to keep it central leader so I can edumacate myself with the pruning style :). 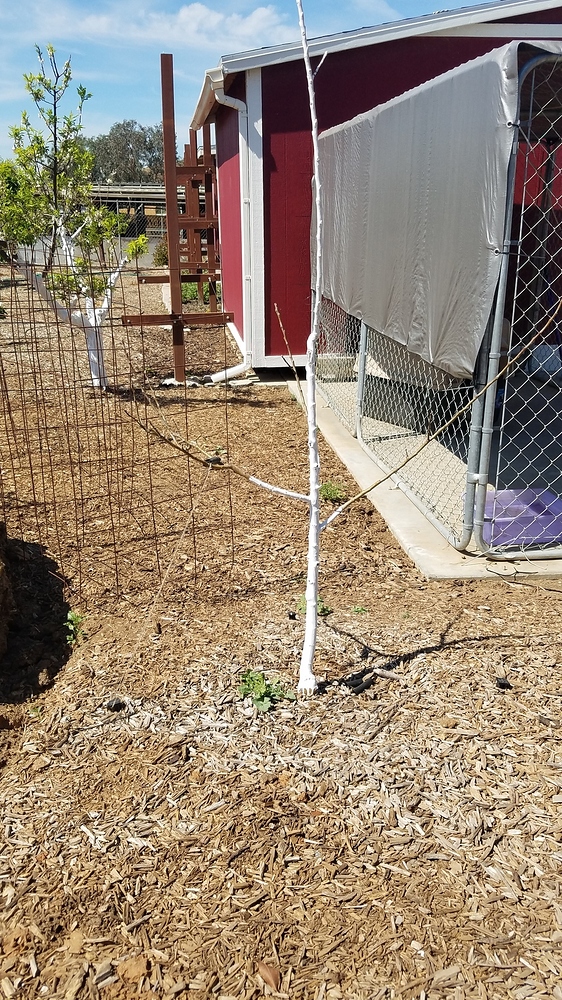 The below pic is of a Dorsett Golden that I started trying out central leader…hopefully with the new growth this year it will look a bit better. On M7 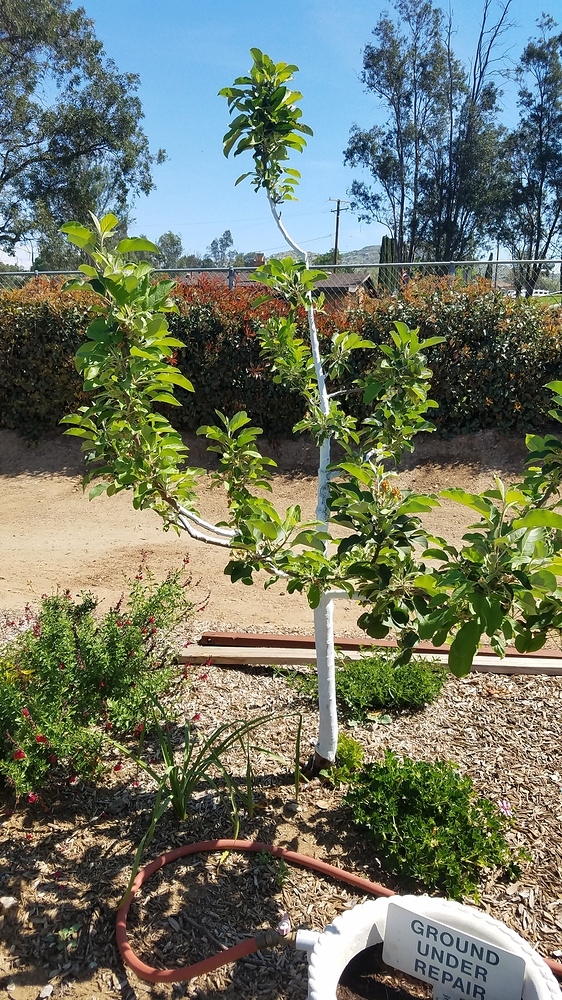 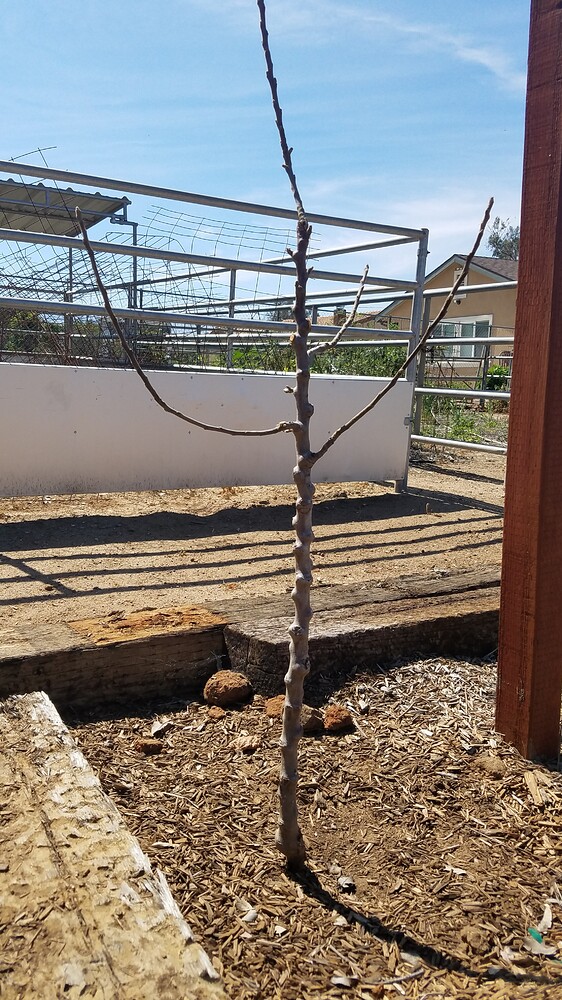 Lastly is my Empire…just a long stick. Not sure if I cut it back or just let it grow. On M111 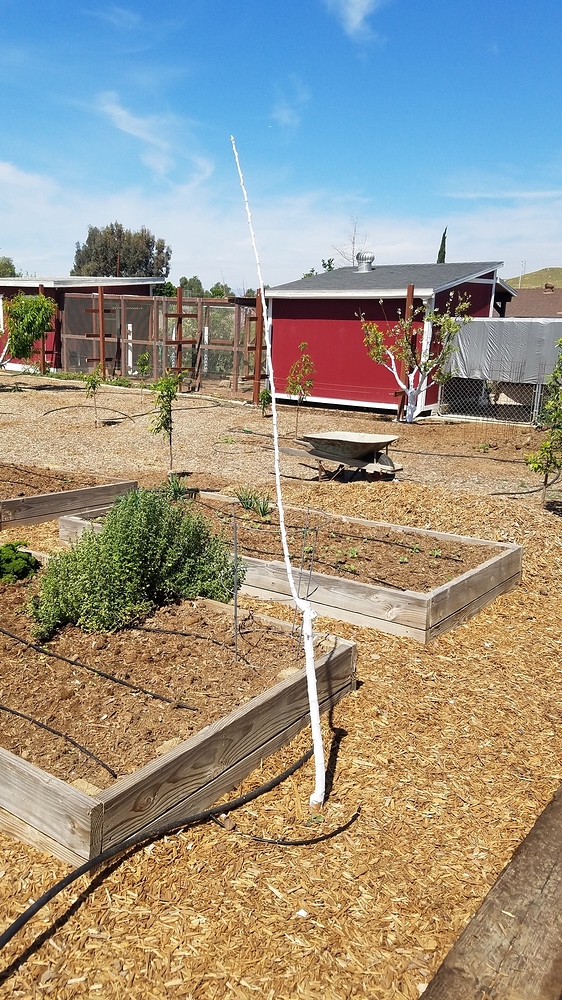 Im not an expert but I’ll out in my 2 cents. I’d cut those back to encourage more branching and growth. The cut should create a flush of new growth including a new central leader. If you leave those trees like that you aren’t going to develop much fruiting wood.

My first thought is to cut the leader down and cut the side shoots by a 1/3 or so. I just don’t want to mess up. I messed up on the Empire…that’s why I have I long stick for a tree…lol

I was remembering Alan’s word of… cut all branches off that are 1/3 of the size of the leader…hope I remembered that right. So Empire was so scrawny I cut them all off.

A lot of people prune to central leader in my area (because of snow load potential.) Typically they prune the center back to just above where they want the next set of branches to grow from. Thus the spacing of your branching to some degree determines the frequency and amount of pruning.

If you keep cutting the central leader you are doing what is referred to as a modified central leader. A true central leader from what I was taught is never headed after the first set of scaffolds is established. You can create branching by scoring/ notching and in some cases the painting of Maxcel or Promalin to encourage bud break that leads to limb formation. Personally I think cutting any branch off that is 1/3 the size of the leader is too harsh of a stance in many instances, especially on sparsely branched trees. I would head back the Empire, but I would just try notching the other trees for limb initiation

The way I think about it is that all central leaders in most fruit production settings discussed on this forum are ultimately modified, so fruit growers usually just refer to the form as central leader.

As far as your pruning methods, lover of puggy, I prefer to wait until tree is more established before selecting permanent scaffolds, removing only branches that exceed 1/3rd the diameter of the trunk for vigorous growers, and 1/2 for spurry, less vigorous types. Rushing to achieve the eventual structure slows establishment quite a bit with apples, pears and E. plums.

Heading cuts are only needed when a variety doesn’t establish much secondary wood from scaffolds. Such heading cuts need to be steered back to a central leader (scaffolds should be managed as individual central leaders with subdominant secondaries coming off them). This steering is performed by way of frequent pinching during the growing season to keep the straightest growing shoot at point of heading cut dominant. Without it you end up with several equal sized shoots at point of cut and very little useful benefit.

Update on the Empire apple tree…

I ended up just cutting 3 or so feet off the top. I think I got some great growth and branching. I was late but got all the tree painted. Our sun here is just brutal and a few of my apple trees are completely sunburned and almost girdled. Hopefully they can recover. Luckily this one had been painted last year. Next I will be bending the branches down for placement. 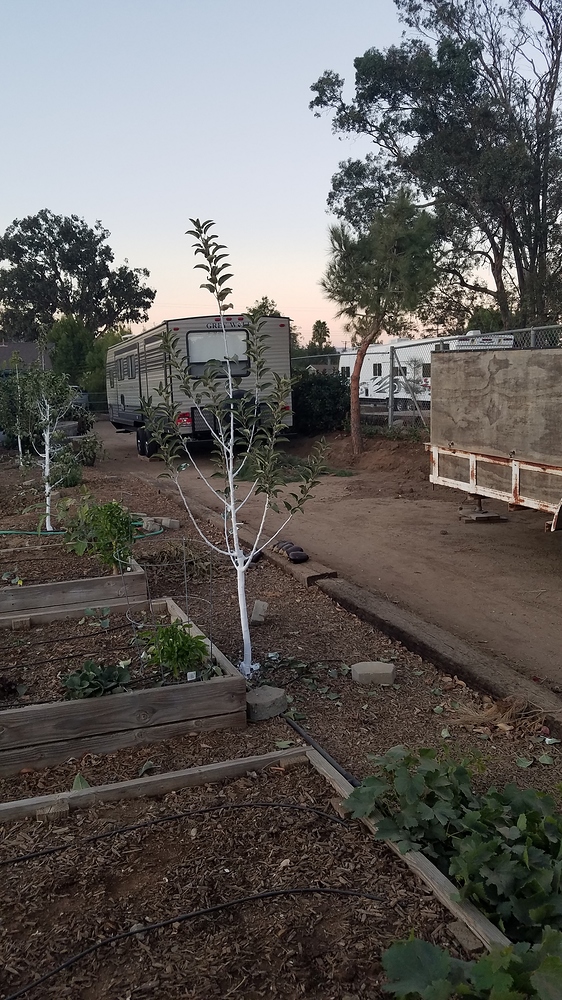 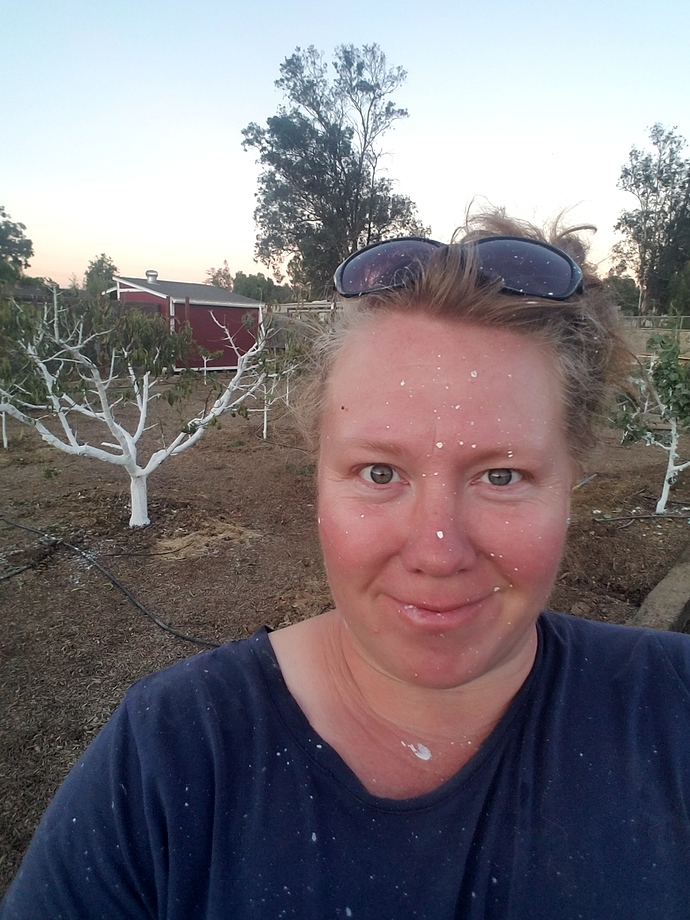 That tree was just a long stick a few months ago, and now look at it. Looks good. How did you get it to branch out like that? I don’t know how it would branch out by just topping it. Did you also notch under any buds?

I have several trees that are top heavy, that is, lots of scaffolds up top, not too many, or any, lower down. Some have two prominent central leaders, and not much else.

I haven’t painted any of my trees, but we don’t get the searing heat and dryness y’all get.