I have been thinking all winter about using a coat of surfactant, letting it fully dry, then beginning the coats of Surround.
Mixing them seems to impede the surround from what i have read.
My thought was that only the first layer of surfactant and surround would be a bit firm and not so ‘flaky’ and bug-annoying.

Some pics for comparison. First pic is the surfactant/one layer of surround.

The other picture is one layer of surround only.

I found that the surf. base seemed to have less runoff. It was more evenly distributed. I think that it put me one spray ahead. 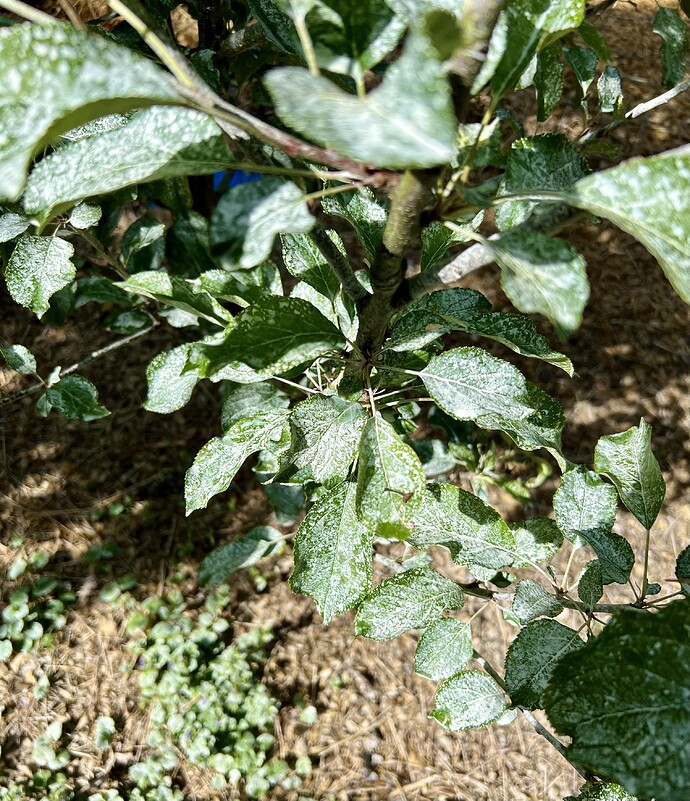 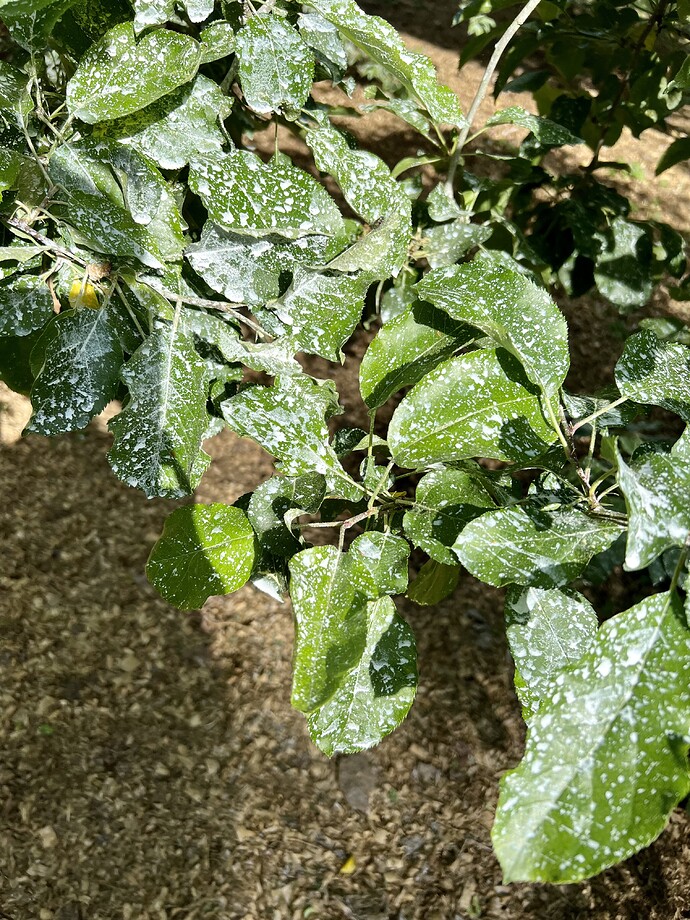 I have always used surround with a surfactant mixed in same solution. My first application typically runs off with very little sticking, so I go back three consecutive applications, allowing some dry time in between. After the third every fruit is completely white.
I would like to better understand your trial. If I understand you the first pic is showing surfactant only in your applicator, allow some drying time, and then you use only surround without mixing in a surfactant? Is that what you mean?
Then your second pic is one layer of surround only without a surfactant? Is that what you mean?
Dennis
Kent, wa

Yes, the pics are just as you stated.

Instead of using a surfactant you could try using a dispersant. The purpose of a dispersant is literally to disperse the particles in a suspension/emulsion. If I were going to do the experiment I would start with about a half teaspoon/gallon of a good quality hair conditioner like Kirkland Signature Moisture Conditioner. Mix it directly with the Surround. Bracket increments in half-teaspoon increments until you don’t see any further improvement in dispersal of the Surround.

The downside of using a dispersant is that it increases the potential for rain-washing. Layering on additional Surround without using the dispersant would help that, and the layering should proceed more uniformly with a well-dispersed base layer.

By surfactant I’m thinking you are using what is also called a spreader/sticker? I can see the logic, and it does seem to make for a better hold on the first Surround spray.

That’s been my approach, figuring that subsequent plain surround layers will still flake. I saw some CM and PC hits, i really laid it on thick today snd am topping off tomorrow.
I will also research dispersant uses as well.

Yes, i didnt buy Nufilm i bought the southern ag version sticker/spreader (i like their products)

I’ve heard that nufilm mixed with surround is a disaster to wash off fruit.

On each Surround bag, it has a warning to NOT use sticker with it. Nufilm is a sticker/spreader. Once I accidentally mixed Nufilm in Surround. It stuck to fruit esp peaches and apricots so well that I ended up eating a lot of clay that year. I learned my lesson.

I’ve used fish oil based sticker and that was not washable. I’m with Reg and I think it’s better to avoid mixing surround with anything, except maybe another powder.

Follow up: i prepped trees with sticker in evening and sprayed in am; i saw that the enhanced surround deposition no longer happened. Seems to work only when the sticker is freshly applied.

Why I thought (hope) layering might prevent the concreted mess. Avoiding having the particles in a solution.
I will follow it up later down the road.

Those ***damn bugs inspire us!