Last year my best producing fig variety actually seemed to over set. A lot of the fruit was low brix and not real good- even though it was a relatively dry summer. My thinking is that like all other fruit I grow, when the ratio of leaves to figs is low, the size and sweetness of fruit suffers. This year it seems to be setting an awful lot of fruit again and I did a bit a thinning, but then decided to stop and write this comment for some feed-back- especially from growers more expert on figs than I am.

Figs are one thing I haven’t thinned very often. I do have a plant this yr I wish I had thinned. I’m thinking the fruit is going to be like yours was last yr.

Most likely the watery taste was due to excessive growth, don’t think thinning fruit can help that. I know @fruitnut and @Richard do great with lots of growth, but they are in dry climates where the fruit can transpire that excess water more rapidly than someplace humid. Just the opposite could be true in some cases, where each leaf is drawing water and increases the sap pressure, fruit on suckers tends to be not as good so it makes sense to me…

For example here is RdB in the summer, one from an inground tree with lots of leaves and a sparse fruit set, and the others from a container tree that didn’t grow much at all for whatever reason. 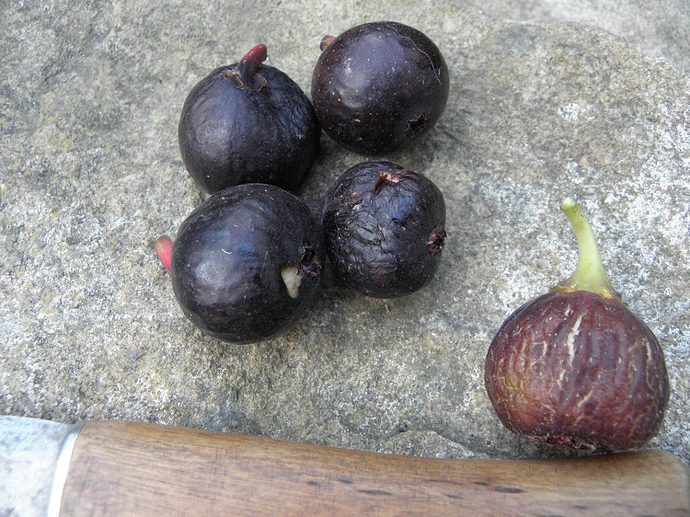 But then to complicate matters, here is fruit from inground trees in October, the lower temperatures reduce the sap flow and the fruit gets less watery… To add evidence to that, figs don’t usually split open in the fall. 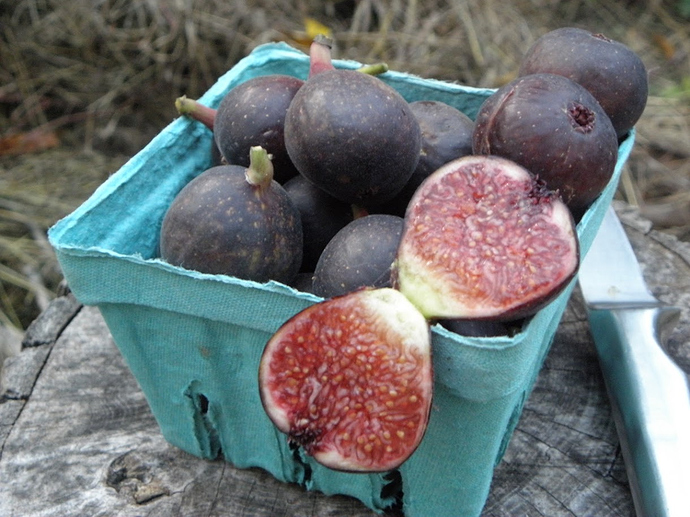 The growth wasn’t exceptional, but the heavy cropping was. Another variety 50’ away in same soil same treatment in all ways bore much less fruit and had typical sweetness. The figs at the beginning and the end of the harvest were more sweet, it was when they were coming in fast and furious that the sugar dropped.

The fruiting habit of figs is different though, one fig per leaf on productive trees. The tree maintains a balance itself.

This doesn’t help explain the difference between the two trees last year and I wonder how you feel so sure that reducing the number of figs wouldn’t increase the sugar in the remaining fruit. You have spurred me on to thin some branches and compare results with my refractometer. Thanks.

Correct. I never thin my figs.

Correct. I never thin my figs.

And so how can you know the affect of thinning them? Anyway, under your intense sun and rainless summers your figs get sugar sweet- every one every season based on my experience. On my best years my figs don’t get up the sugar of ones I’ve tasted from inland (hot) CA. Only your brebas can be bland in my experience.

Anyway, under your intense sun and rainless summers your figs get sugar sweet- every one every season based on my experience.

On my best years my figs don’t get up the sugar of ones I’ve tasted from inland (hot) CA.

That’s not me, I’m in a coastal influenced area.

That’s not me, I’m in a coastal influenced area.

By inland I didn’t mean entirely without coastal influence- I consider you to be in a relatively hot Ca. location, just not actual desert. I’m guessing that very little commercial CA fig production occurs in areas hotter than yours, although we did have a fig tree when I was very young and living in Scottsdale Ariz.

Where I spent most of my youth in Topanga Canyon, summers were pretty hot after June (we thought of June as Malibu winter with all the fog, although it usually burned off early a few miles inland where I was). Figs there were reliably sweet, but then, so were the ones on trees by the beach in Malibu, as I recall- just not quite the highest sugar of more inland fruit. How many miles are you from the coast, anyway?

I never thin my figs either. I would surmise that the difference in your two
trees is do to location. Figs are very particular about their planting sites.
I have two BT’s grown from the same mother tree that are planted within
15ft. of each other and receive identical care. One is always a star performer,
while the other is always average.

I consider you to be in a relatively hot Ca. location, just not actual desert.

Nope. My summers are much cooler than areas of California’s central valley where figs are commercially grown.

Nope. My summers are much cooler than areas of California’s central valley where figs are commercially grow

Oh, I thought you 'd be almost that warm. What is your average summer high compared to the central valley “fig region”- do you know? The average temp in Topanga is certainly warmer than where I am now with far less cloud cover, which is the basis of the point I’m trying to make anyway. I’m pretty sure you are not cooler than 5-10 miles inland from the Malibu shore or I may try to become your neighbor some day. .

I would surmise that the difference in your two trees is do to location.

Which is a logical theory when you don’t have the information that trees have been growing in the same locations for about 15 years and last year was the first time one of the trees had bland figs, the same year it had probably double the crop of previous seasons in ratio to leaves while the other tree had its normal crop load (which even on a normal year has fewer figs to foliage). There may have been a difference in the treatment of the two figs when dug up and placed in cool ,dark storage, however.

While I appreciate all this help with diagnosis, I was actually hoping someone on the forum had experienced a similar problem and tried thinning crop load. It looks like it is up to me to experiment, but the results will not be conclusive. I will post the results of my comparison of fruit brix levels of contrasting crop load branches.

I don’t think thinning has any impact on the quality or size of figs, as
it may have on other fruits like peaches. Sometimes figs just have an
off year, because of many variables, but not thinning.

So you’ve thinned figs?- wait, you could be basing this on years the crop was thin and fruit was no sweeter, but that still doesn’t mean there isn’t a point where a certain variety might sometimes overbear to where it couldn’t manufacture enough sugar for every fig- especially in areas with less heat and sun. Coastal growers in N.CA grow bland figs, you know. The big challenge there is getting enough sweetness for them to actually be good.

I know this because my sister lives north of Eureka and shes a fruit grower who loves figs. Now she has a greenhouse.

What is your average summer high

The only thinning of figs I have practiced is removing figs that have no chance of ripening before frost so the tree can focus more sugars and nutrients to the ones with a chance of ripening. That’s the theory, but who has done a controlled trial on that either?

Ask your sister to thin her figs and see what results she gets.

There are several things that can cause figs to not be properly ripe, there are never too many figs on one tree, that does not hurt their fruit quality any. Not enough sun light, too much rain, too much nitrogen, pruning the tree when the fruit is ripening takes away from the fruit quality because the tree is healing. The tree could have been stressed out last year.