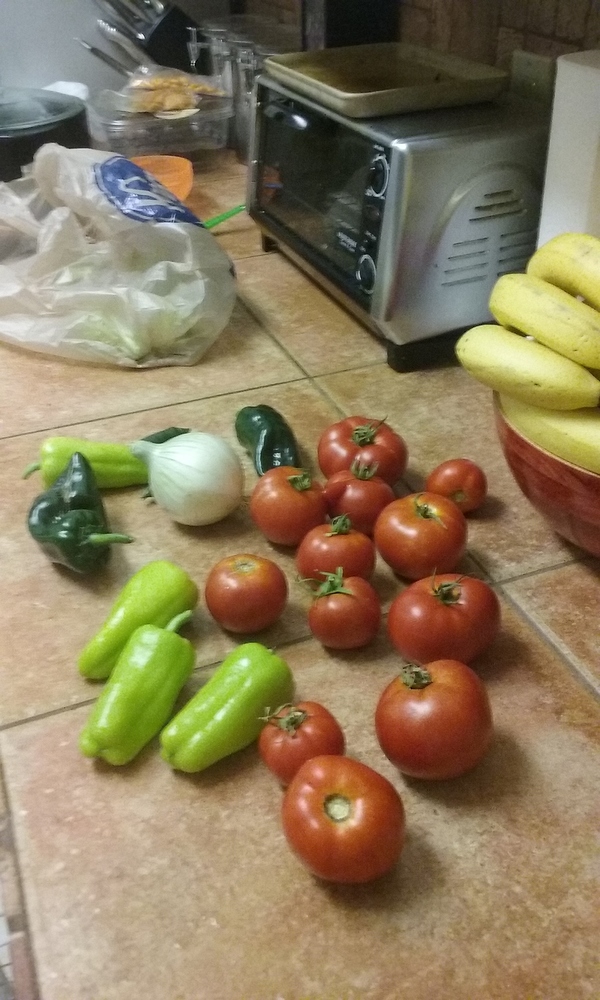 I just planted out my peppers and tomatoes. I still have a bunch of peppers yet to plant out. I need more containers. In ground plantings are done. Looks good, can’t wait till I get some this year. I have onions and garlic going too. My nectarines were hit by a late frost, doesn’t look good, oh well, plenty of other fruit to have fun with.

Sorry to hear about the nectarines. I’ve had many crop losses for all sorts of reasons down here which is why I’m doing alot more growing in my greenhouse. I’ll bet your tomatoes and peppers are going to be great!

I’ve had many crop losses for all sorts of reasons down here which is why I’m doing alot more growing in my greenhouse.

That’s why I’m in a greenhouse as well. Freeze and/or hail damage nearly every yr since 1972 in TX. To say nothing about birds, coon, etc that take every fruit if not mitigated. My only real issue in the greenhouse is spider mites.

But don’t let me highjack your thread. I may start a new post today about protected culture.

Oh no hijack away sir. It’s always good to get your input that’s for sure!

I may start a new post today about protected culture.

That looks good! I still have to transplant bush beans and bush cucumbers, replant yellow squash, get eggplant in the ground and then plug in some parsley, dill, and late parsnips. Last year I had tomatoes in April, and this year my plants are behind, so I hope to get my first one in June! I never plant potatoes, but this year I planted a few hills for “new potatoes and peas” a Southern/Midwest dish. Those peppers look good wildscaper!

Been getting a lot of fine spinach. It likes this year’s cool weather, and I started it early.

Thank you! The dark ones are Poblanoes and the bright green is Gypsy. Two of my favorite sweet peppers.

First heads of lettuce cut today. Romaine, and something that was supposed to be a red butterhead, but I’m dubious. At least it’s a red something.

Holy Cow! I can’t believe you are already picking tomatoes. I know you are zone 8a but I’ve missed or forgotten where you are from, Drew. Where are you? CA?

No not from CA I’m in Dallas Texas but I’m utilizing a greenhouse to get these results. I figure a gh is the next best thing to growing in CA! I started my tomatoes in early Feb. From seed and they have gone crazy. I have to fight spider mites tooth and nail and I’m still figuring out how to contain their growth but I already have several freezer bags of salsa, have made several batches of fresh, given a bunch away etc. And I’m still cranking em out. Congrats on those awsome looking cherries by the way Sir. Those look great.

I had tomatoes and orange bell peppers today, but they were from plants that I’d overwintered indoors.

Thanks drew for noticing my few little cherries! I sincerely applaud your greenhouse efforts.It’s just amazing to see tomatoes and peppers this early in the year and it must be extra gratifying having them so early. And they look like regular garden veggies, so that is just amazing! I know fruit nut in texas also says spider mites are his biggest issue, but you sure seem to be overcomming them. You’ve probably told about your set-up before and I missed it, but how big is your greenhouse? You been doing that for years? Like most growers, I’ve long thought it would be a fun way to beat the seasons!

unbelievable! I didn’t know you could overwinter a tomato. By the end of the summer mine are out of gas and dying usually. Even if you started them in late fall, that is very neat.

I root them along the stem so that I start the winter with newer growth and a smaller plant. That way I can get rid of the older, worn out part.

That makes sense. Sometimes if I let my tomato plants get really leggy I will bury as much as a foot of stem and they do great…maybe even better. So I see what you mean. Maybe I’ll try that someday.

And up north - bok choi.

Sorry for the delayed reply cityman. My GH is huge 120 x 60 I think but I’m only able to use a small portion of it this time of year. It is used in the winter to winter protect tons of mostly tropical container plants we use to decorate the park in which I work. This time of year it also serves as an event center and seating area for special events we host in the public park in which it sits. It is a large beautiful structure that is every bit as much a show room as a gh which has its plusses and minuses. All my stuff must be able to move to a small area and screened off during the events which is why my growing foot print remains reletivly small (for now) but I have several tomatoes, a few greens and several containerized fruit trees in their now. The peppers are grown in pots outside. I grew a few veggies last year in there but this is the first year I have been able to utilize my GH for fruit growing and believe me I am still figureing out my systems but I feel like I am off to a good start.