Using up some of those apples!

The old Joy of Cooking that my mother gave me quote a definition of eternity as “two people and one ham”. They might just as well have said " … and one Liberty apple tree’s annual production." We’ve still got close to 100 pounds, I’d guesstimate, and I don’t want to let them go to waste. Since many of them are blemished by hail I don’t feel they’re good enough to give them away.

Since I didn’t make cider and it’s a little late and cold I’m looking to apple sauce, frozen pie fillings, and the like. We like them baked whole with walnuts and brown sugar, cinnamon and vanilla and a wee grating of lemon, and I’ve sliced them up to add to pork pot roasts. One of my favorite ways to use them is making raspberry or peach jam.

Apples (especially when not quite ripe) are pretty high in pectin. I core and grate them, with the peel on, and add one or two to two pounds of raspberries or peaches with sugar and a good shot of lemon juice. Cook until the jam tests for set and proceed normally.

I like jam/preserves made this way better than with commercial pectin. It seems that, even with the “dilution” of the apple the flavor of the dominant fruit is more assertive than when using pectin. I’ll usually use three and a half cups of sugar with a batch of raspberry jam and around two with the peach. The little bit of extra jam is an added bonus.

I have yet to try slicing and drying them, but I want to do that, too.

Any other suggestions I’ve overlooked?

You mentioned drying. I slice and dehydrate them (peels on) and eat them as a health food candy! I love dried apples! Add a vitamin c pill to the apple water or lemon juice if you don’t want them to turn brown. Brown sugar as you mentioned is heavinly! Honey in my opinion really compliments ham and apples too mmmm! Apples that I run through the juicer get a froth to them so I buy old fashioned oats for my family and add cinnamon and apple froth to oatmeal. Same with cookies and use sweet sorghum where you can if your community grow it locally ( ours does). Hard cider is always an option but spiced non hard cider is usually my preference.

I baked the last of my Jonagold’s last night. I am so jealous of all of your apples! If I had that many apples I would make dense apple butter, which takes time and a lot of apples. Have you ever made it? It is filled with cinnamon, I don’t add nutmeg, which some recipes call for. Its over-powering to me. So good!

I haven’t made it- but now I will. Love cinnamon, am really careful with nutmeg.

In my copy of The L.L.Bean Game & Fish Cookbook by Angus Cameron and Judith Jones, Random House, 1983, they state "Tarragon is a bully … " and they might have just as well said nutmeg or clove, to my taste. Don’t get me wrong: I love them all. But it sure is easy to get carried away with some of them.

One of my favorite combinations in sweet cooking is cinnamon, lemon, and vanilla, with or without honey, but always with butter! In savory cooking I like a hint of nutmeg in scalloped potatoes. Greek baklava depends on, and succeeds with, honey and clove. I’d like to learn to use chocolate as a savory ingredient but never have. I use a little allspice, and like the addition it makes to my tried and true cinnamon ginger mix for pumpkin pie. This is one place where a delicate addition of clove and/or garlic can add nice depth. Made my latest pumpkin pie with a healthy shot of bourbon, an don’t think it hurt anything, but I’m careful with my bourbon! **

Mark, Have you tried a tarte tatin. Its upside down apples and caramel. Lots of Butter! too. Super easy to make, be careful turning it over. You’ll love it!

Mark, your Liberty sounds like a tree of joy and plenty. Finding new ways to save and savor its bounty is a delightful dilemma to delve into.

“The Joy of Cooking” is one of the two cookbooks, other than the “Cooky Book”* that are relied upon in my family. The other cookbook is by Meta Givens, and even older.

We typically put most of our apples into frozen “pie filling”. Used to cook them for a while, but this year we read that you really don’t need to heat them much at all, so tried some with only minimal heating (just enough to “cook” the outside of the slices but not the insides). Froze some like that and then tried them; they were great, much better than the more cooked ones. I’ll reserve final judgement until I see how they are after a few months in the freezer, but if they keep, definitely switching to this way…

I love the tarte. Have flipped many a caramel sticky roll, upside down cake and the like when I still worked as a baker.

Steve, I’ve found it convenient and workable to completely assemble apple pie fillings, thoroughly coating the pieces with the sugar mixture and then freezing them; I’ve never tried any pre-cooking at all when doing it this way. Works very well with plums, peaches, cherries, and so on. For that matter you can make up a batch of pies and freeze them.

For you pie makers, here’s a couple of links to great pastries: 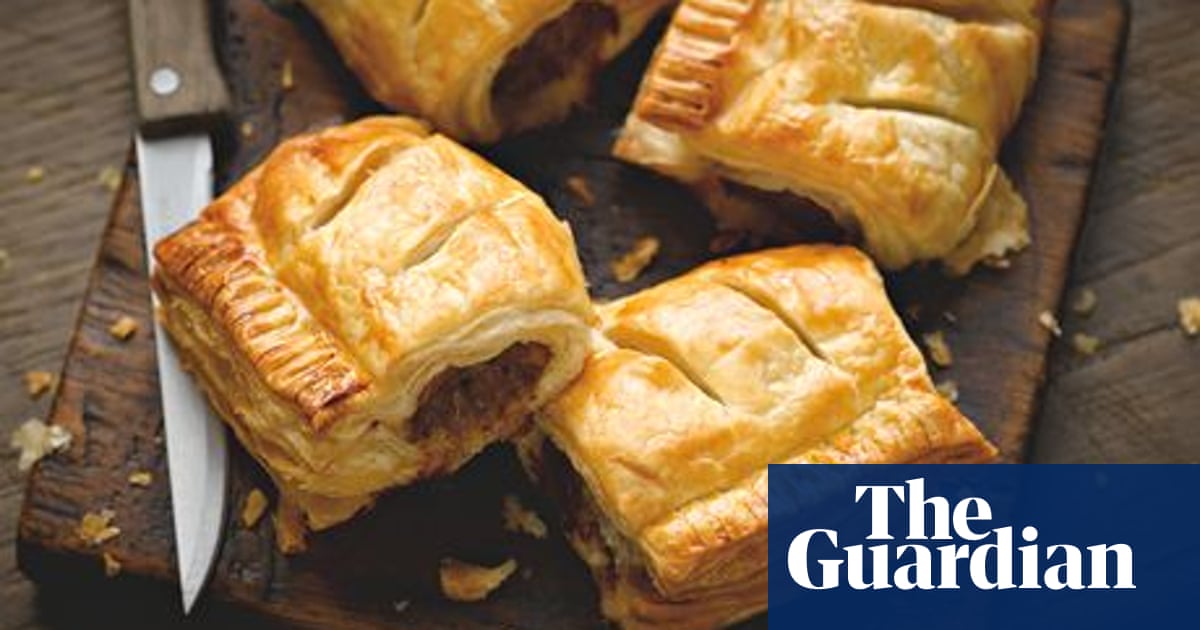 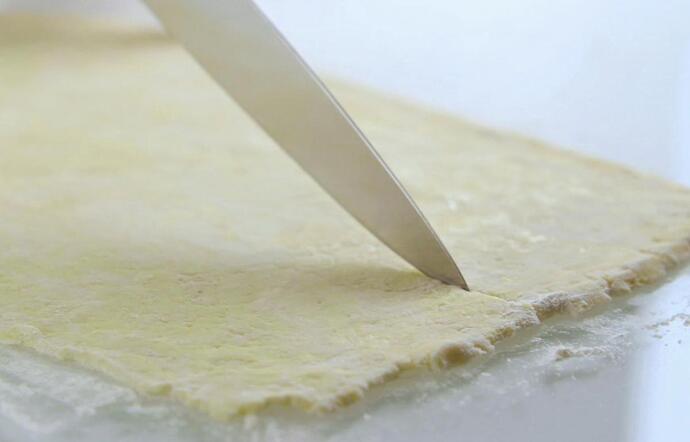 Quick Flaky pastry is really a cheat's version, because it doesn't involve the turning, rolling, resting all the palaver that go into the real thing.   The advantage is that what you get is a home-made pastry made purely with butter, which gives... 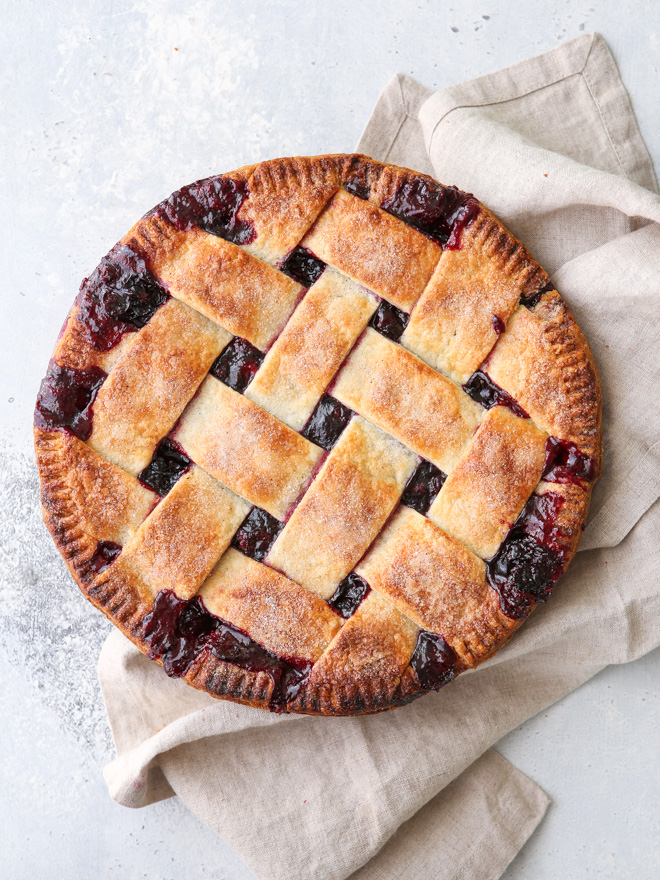 The flakiest all-butter pie crust is easy to prepare and practically impossible to mess up with my tried and true recipe and step-by-step instructions. This pie crust is my go-to for all of my pie baking and I’ve probably made it hundreds of times. I...

I like cookbooks like Joy, Fannie Farmer, or Betty Crocker and the like because they really will walk you through things and enable success in new efforts -when you get a wild hare (hair?) to try something you ate somewhere, for example, or read about.

I like the regional cookbooks, too, and the occasional fundraiser production that the different church/school/other organizations put out. Lots of chaff to sift through, but some nice grains from time to time.

Is there anything better than a buttery apple pie with cinammon mixed throughout the pie dough and apple filling? Umm… erp!

Now, just as a matter or personal taste, I’m partial to a grating of lemon and a hint of vanilla in my apple pies. Other than that, I have nothing to add.

It all sounds so good. My grandmother used to make what she called apple sauce but that is really not what it was at all. It was canned apple slices with apple pie spices added and plenty of sugar. It was like eating apple pie filling right out of the jar. She loved to can fruit, and I loved to eat it.

Mark,
I like the vanilla in the form of icecream a la mode. Hot cup of coffee and apple pie.