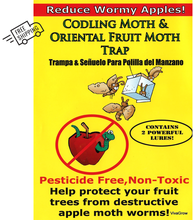 Does anyone have experience using these traps? Trying to get more serious about getting harvests from trees.

Wild amaranth make the best trap plant for cucumber beetles. You wont see a single bite in any of your Cucurbits with this in your garden. You will need to spray your amaranth or the beetles will strip it dead.

Yes, I have some red amaranth I plan to sow for that purpose.

I tried 2 types of CM traps last year, Delta and Trece. The Delta traps consisted of delta forms, yellow cards (sticky on one side), and lures. The Trece traps were pre- coated with a sticky substance and had lures to attach.
The Delta traps were the most useful because cards could be removed and replaced throughout the season. Because the sticky substance was already applied to the Trece traps, they are not usable after the first season.
But it looks like for the current season Delta traps come without lures (too bad) and the Trece traps include a separate sticky card (good).
Last year I did ordered extra lures from Gempler’s to replace after 4 weeks.

The small print note on many of the traps state: “These traps are intended as an early warning system for the presence of pests, and are not designed to reduce pest populations.”

This year I decided to skip the traps and just apply Surround!

Backyard orchardists can use sticky pheromone traps to determine when adult male codling moths are flying. Then, the time of egg hatching can predicted by tracking cumulative Growing Degree-Days from this point called the biofix. When you have a handle on when eggs are hatching, you can use chemicals more effectively.

While you may be able to trap a significant portion of the male codling moths in your backyard on this handful of warm evenings, you are also drawing in those from surrounding yards, and you won’t get 'em all. Thus, bred females are likely to visit from all sides in the next weeks, anyway.

Because the adults are mobile, the recommendation to backyard orchardists is to leave “mating disruption” strategies to commercial operators who can apply such strategies over much larger areas. Backyard orchardists may concentrate their efforts on killing the eggs and larvae, which tend to stay put.