My 9’ tall Schuette’s Oak (bur x swamp white hybrid) seems to be confused as to which shoot should be its leader.

It’s hard to tell from the ground, but it appears that the terminal shoot has already stopped it’s first flush of growth, whereas that shoot on the right still has new leaves coming out of the tip of the stem. If it were your tree, would you cut either of those shoots or try to “retrain“ anything, or just let it do it’s thing and see what happens?

As a side note, also notice the two other shoots to the left of those have some insect damage, one is completely stripped bare. I’m honestly not worried about those because of the rest of the tree has full foliage. 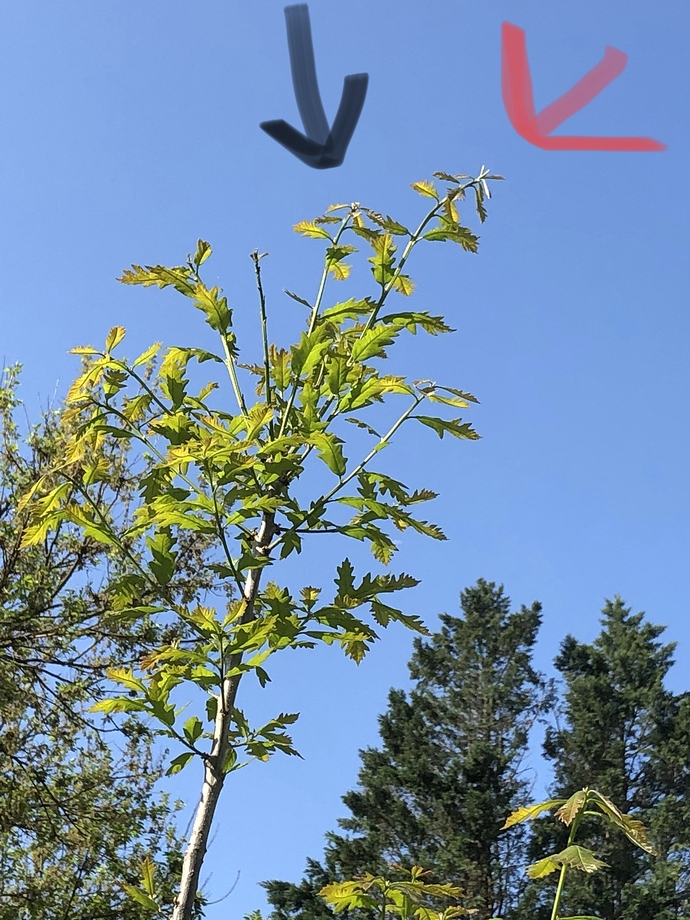 I have a Gary Oak that is beginning to crown like this, it has multiple leaders on both trunks.

You have several branches at the top there. They all seem to be originating from approximately the same point, give or take a little. If you want the tree to keep growing vertical for a while, before branching out, I would cut off the branch with the red arrow.

I would also cut out a lot of the other branches clustered in that area. When the tree is full grown these branches will rub on each other and create places for infections to occur. Also note that when two branches grow from the same point and make a acute angle (under 90 degrees) it will be a weak spot on the tree, and eventually one branch may fall off. Better to remove the extra branch while it is still small. If the two branches make a wide angle (say over 90 degrees) then that origin point wont be weak and you don’t have to remove the extra branch.

If it were my tree I’d use electrical tape and tie a stake to the top and secure the strongest or one of the strongest shoots and remove any that are growing strongly upright with apical dominance. I’d do it right now.

Tie the leader you choose with flagging tape or another plastic tape without adhesive, of course… and only work on the shoots with obvious apical dominance. The others should be left alone… those branching more horizontally.

I was thinking the same. The challenge is getting 10’ up - it’s planted on a slope, and getting a ladder to be stable is a bit tricky.

You can leave it alone too and when it forks because it looks as it will, use a pole pruner another year or two down the road.

Dax, I was able to get up there, and basically attach a “splint” to it as you suggested. I emotes the weakest upward shoot and tied the longest/strongest one straight. It was still flexible enough to bend straight.

I’m guessing, just based on the vigor of this tree, that I can probably remove it in no more than about six weeks.