What are you planting during the 2016 season?

Oh, I certainly hope I can control myself! I shouldn’t buy a single thing. I have lots of room, but can’t keep up with what I already have.

I’m planning on starting a multi graft plum - types a bit undecided - and a Sansa apple on G11.

I think I’m a plant hoarder.lol.

When I read your question, the first thing I did was think about what I’d gotten this year. The tally came to 64 potentially fruit bearing plants - not counting the 153 strawberry plants. I still have those 15 trees from Stark’s end of season sale to plant in December after they go dormant again. (Although it will probably be only 13 because I doubt 2 will make it.) Along with 10 blueberries that are currently being pot grown.

I really am hoping to have restraint and sensibility next year while I continue to acclimate to the current plantings.

What I really both want and need to do is get proper scions and do extensive grafting. I need to “branch out” in more ways than one. Succeeding at that, I think, will give me the longest term satisfaction and feeling of accomplishment.

I’d also really like to root a variety of figs.

In the end, though, I do know myself, and there has never been a year when I didn’t buy at least 1 tree. I’ll wind up buying at least a few actual trees. Unfortunately, there’s been an ongoing list in my head.

But I am NOT a plant hoarder. I’ve learned to let go when they aren’t working out.

Will you be doing any crosses with any of these?

I am debating getting a plum a bit out of the usual - Luisa from NZ. Wonder if it could be a more interesting base tree for J. mix than Shiro.

I want to cross my peachmond with the Marcona almond.

Similar to MuddyMess, I’ll probably buy something, even though I really should stick to grafting on the existing trees. If any spaces open up (a couple apricots have died and I’m thinking about eliminating a lot of red/white/pink currants and possibly some gooseberries), I’ve got some rootstocks that I can fill in with (a few K1 which I can make into peach, plum, or apricot, some B9 suckers, and a few pear rootstocks, as well as some jujubes).

So, in theory, I don’t need to buy anything. Of course, I didn’t need much this year either, but I still got 20 trees, 8 bushes, a bunch of berry canes, 25 strawberries, and 9 rootstocks (not counting the 50 jujube rootstocks).

in theory, I don’t need to buy anything.

Ha. Haahaa. That sounds like my story too. Somehow though when browsing Raintree not only did a Luisa plum get reserved but also a Spice Zee Nectaplum…and those 20% free Albion strawberries will need a home too.

I dont have room left. This year, I just found graft is a fun thing to do, so I very likely will do a lot of grafting, but still will order few trees, haven’t decided what to order yet.

I want to cross my peachmond with the Marcona almond.

Your peach/almond crosses blow my mind a bit. Just would never have thought of that.

What taste and textures are you expecting/hoping for?

And adding to my list…Craig’s Crimson on Newroot (next to the front door, partially under the eave, instead of the Spice Zee) and I’m thinking I can maybe squeak in a Spring Satin.

In my peach x almond hybrids, I expect a bitter fruit, and on my future almond x ( peach x almond) hybrids I’m hoping to get a self-pollinating almond.

Here are my peach x amond hybrids, both originated from an F1 Nonpareil almond, seed parent, x Elberta peach, pollen parent. One resembles more like a peach, and the second one between the two. 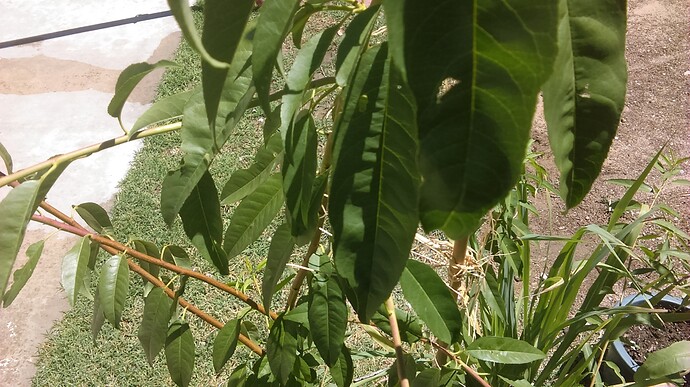 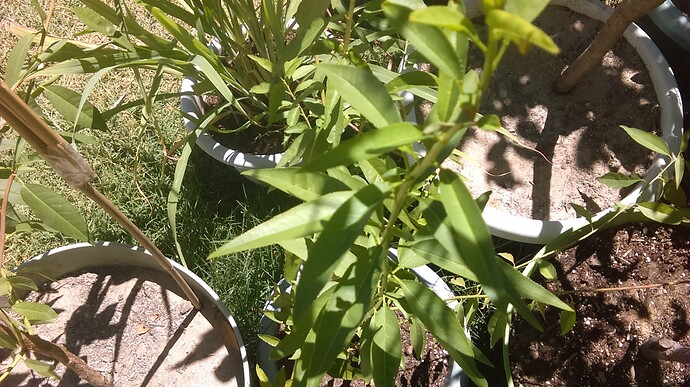 In my peach x almond hybrids, I expect a bitter fruit, and on my future almond x ( peach x almond) hybrids I’m hoping to get a self-pollinating almond.

Thanks, that clarifies it, I wasn’t sure what your goal was… So you will be crossing these three back with almonds and see what you get?..its just fascinating to me. I wonder which plant will give you the better result, the more peach-y or the more crossed phenotype.

It’a actually two right now, the the almond x (peach x almond) will be conceived during the 2016 season).

I will also cross the peach x almond hybrids with plums to create a drought tolerant rootstock.

I think I will drop the Craig’s Crimson and go with a NY bred cherry like Black Gold, or maybe a Sandra Rose.

I’m pretty much done with my ordering, may pick up one more Peach and some Raspberry canes.

Brethil,
If you want to graft, I can give you some Black Gold scions to graft on your Craig’ Crimson. Just PM me.

Been pondering adding a plum since I lost 1 to borers. Have a Jonafree sitting in a pot to plant, and likely a Shinseiki Asian pear too. A couple figs to plant, and hopefully a Nikita’s Gift persimmon. Where to plant any of it, who knows!