What are your summer flowers blooming?

Hi Mrs. G., the pure joy of seeing a new prodigy. I have an addiction, slightly albeit, to daylily’s from seed. It could get out of control if others to send me seeds! 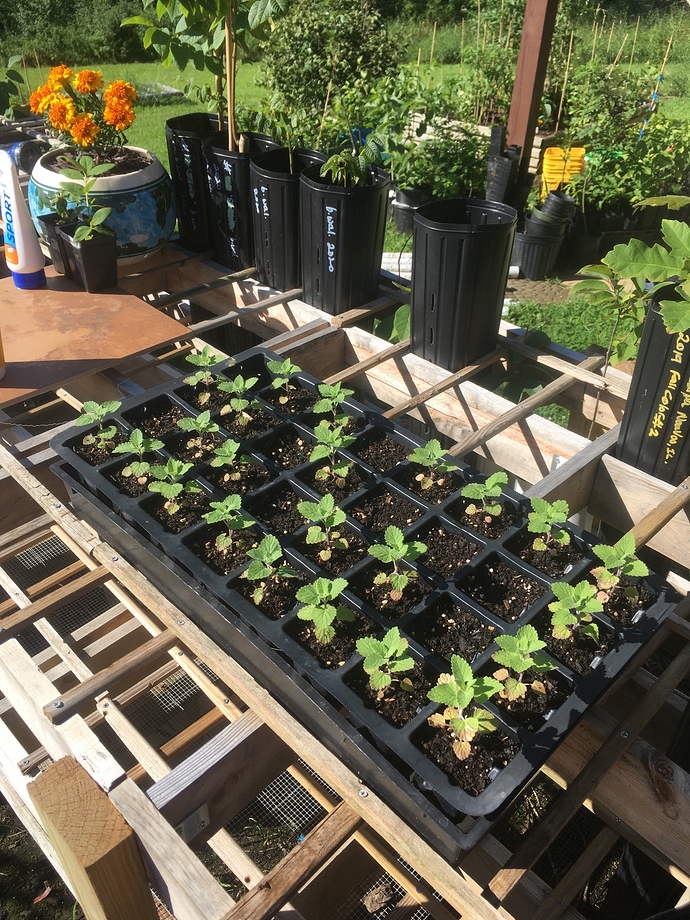 Thanks Jay, but I’m a cheapskate when it comes to daylily plants. 20$ is pushing it. The prices on those things are amazing. I’ll look at it though. My gene pool is still slow. One I have now though which I intend to breed heavily is ‘Wesley’s Summer Sensation’. It’s probably not listed yet online but maybe it is. Came from a IL. biologist that bred it to begin blooming August thru the first Fall Freeze. Mine has scapes on it now. I divided and divided what I had for two year to get it to others and now have two plants: one with (2) fans and the other with one. Both are large scapes however.

Yeah, I think they’re up there with figs for crazy prices. He did a talk at our garden club, and mentioned how new exciting varieties will go for a few hundred bucks a pop for the first few years, then come down as more and more people have them.

All this talk of smell of Nepata cataria (Catmint, Catnip) foliage is because if you smash it at first you can tell it’s in the mint family (probably need a healthy plant and not dicolored foliage that’s unhealthy for the mint smell) but seconds later it’s supposed to smell of urine. I remember that from 20-years ago reading.

Wow I like the flowers with spots all over

Yes, this cactus flower is impressive!

Walker’s Low is the same one we have, Roy, though ours looks more like @mamuang’s . Looks like yours is very happy (and so are the bees).

So, I went out and did the crush-and-sniff test myself this morning. Results:

Monarda fistulosa: Smells kind of like sage, sort of camphor-y, but not as pungent as sage. Not unpleasant, but not something I’d necessarily seek out.

Peter’s Fancy Fuschia bee balm (Monarda didyma): Smells more camphor-y, and also a little bit skunky. Trying to place the skunky part, because it reminds me of something, but I can’t think what. Not very pleasant at any rate.

Walker’s Low catmint (Nepeta racemosa): Struck me as smelling a little more like sage and a little less like mint-and-citrus than it did earlier in the year, but still a hint of the mint-and-orangey smell. Checked several times to see if the smell would turn rank, like @Barkslip suggested, but didn’t detect any change. Not quite as nice as earlier in the year, but still pleasant.

Have to admit that I don’t have the most sensitive nose in general, so it’s possible that I’m missing something that others might be turned off by. Or maybe it’s like the thing with cilantro, where different people respond very differently?

Mine doesn’t look as nice, it’s got its summer haircut and is growing back.

I took some photos a few days ago, before the heat and sun could burn the lilies and roses. 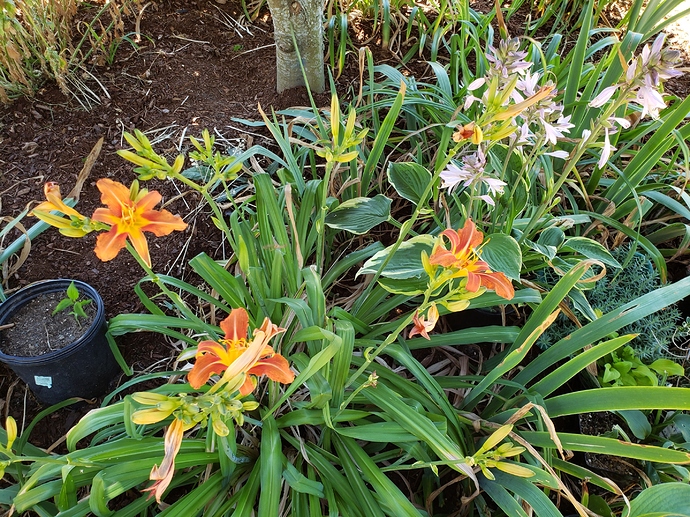 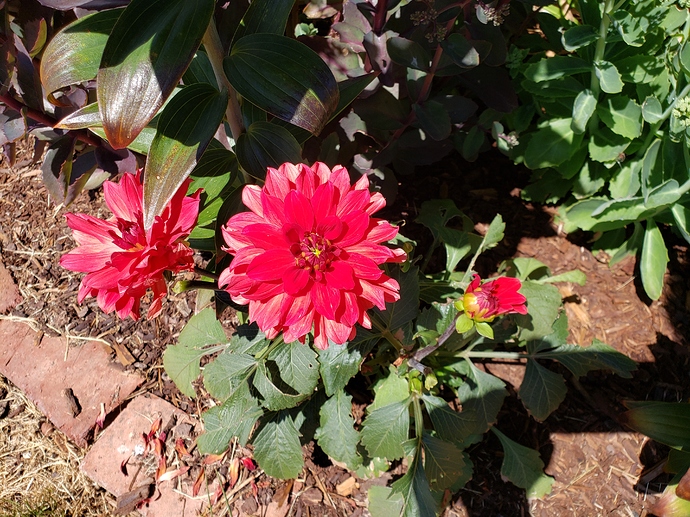 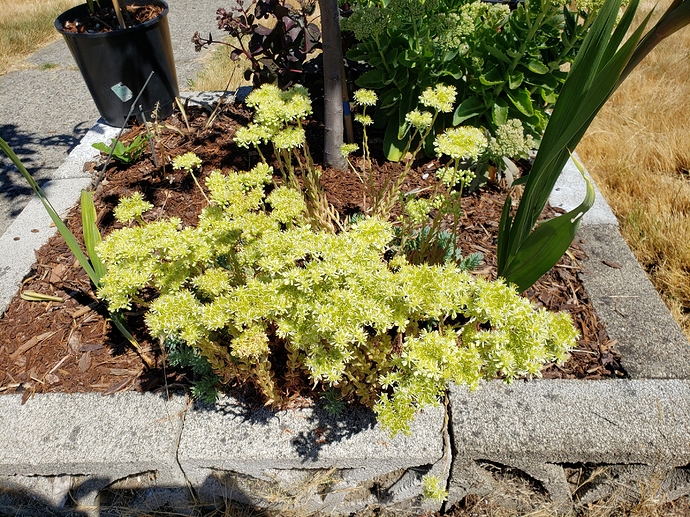 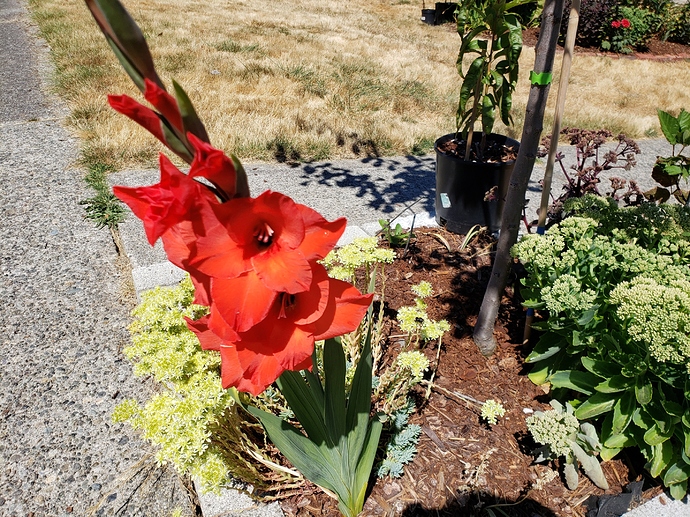 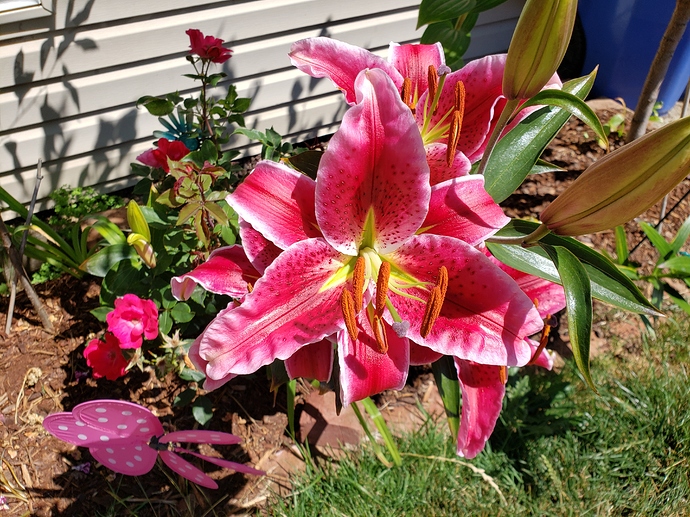 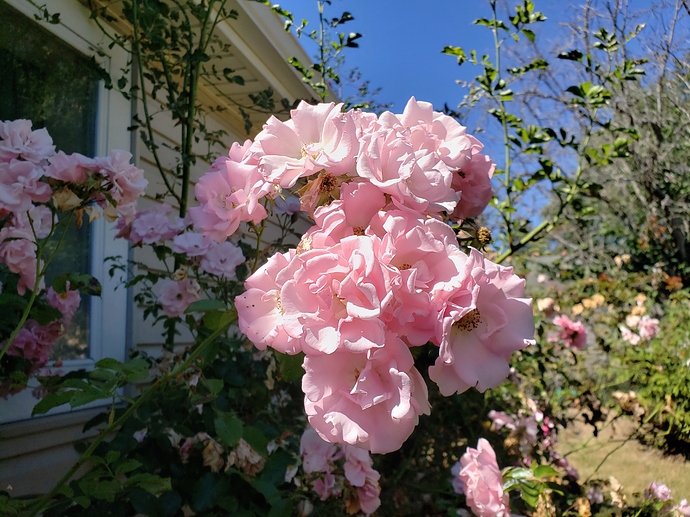 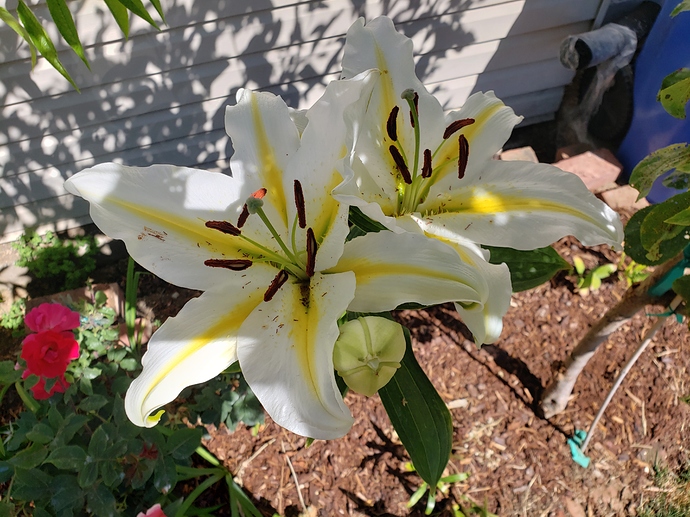 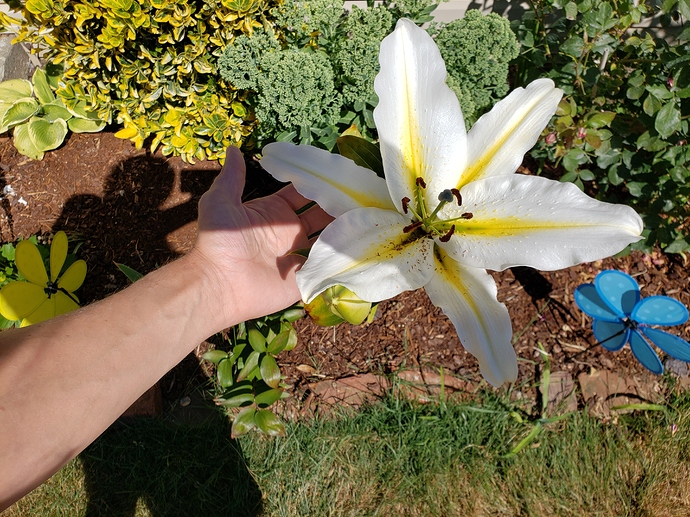 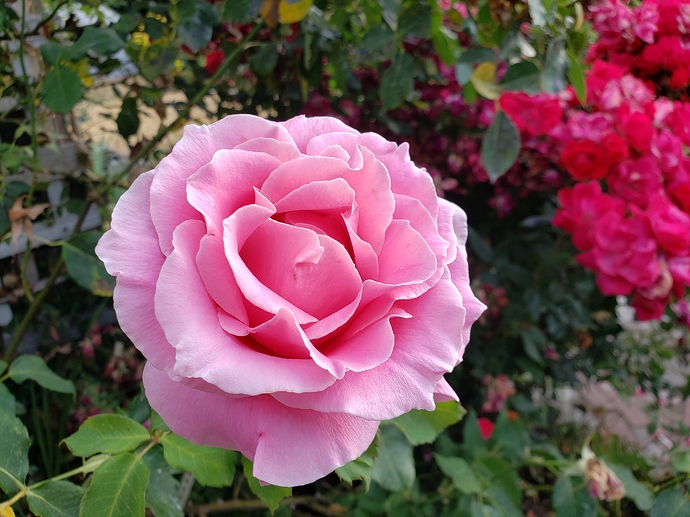 I like these flowers. They have a unique color. Bees love them.
Want to guess? 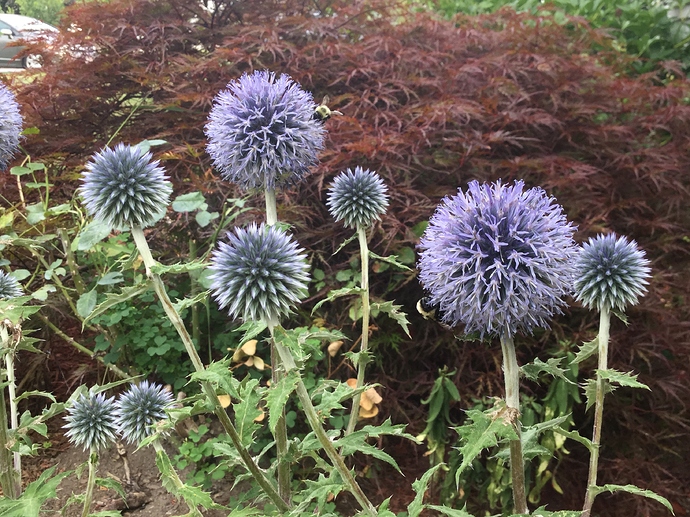 Echinops but sometimes pictures do not do the color justice!

Black eyed Susan vine. I started these late and left them in pots longer, but they are about to take off now 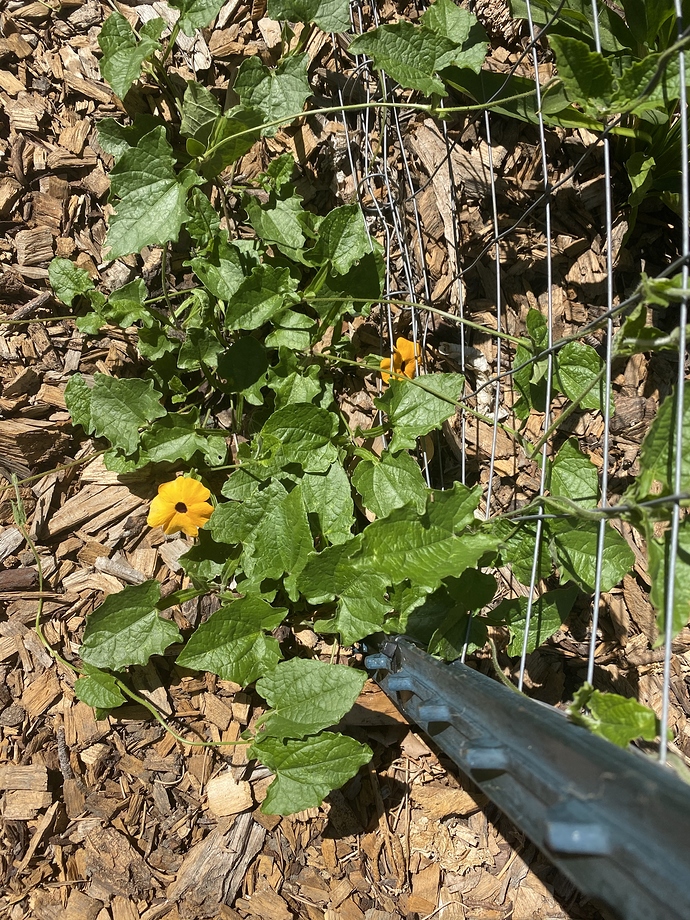 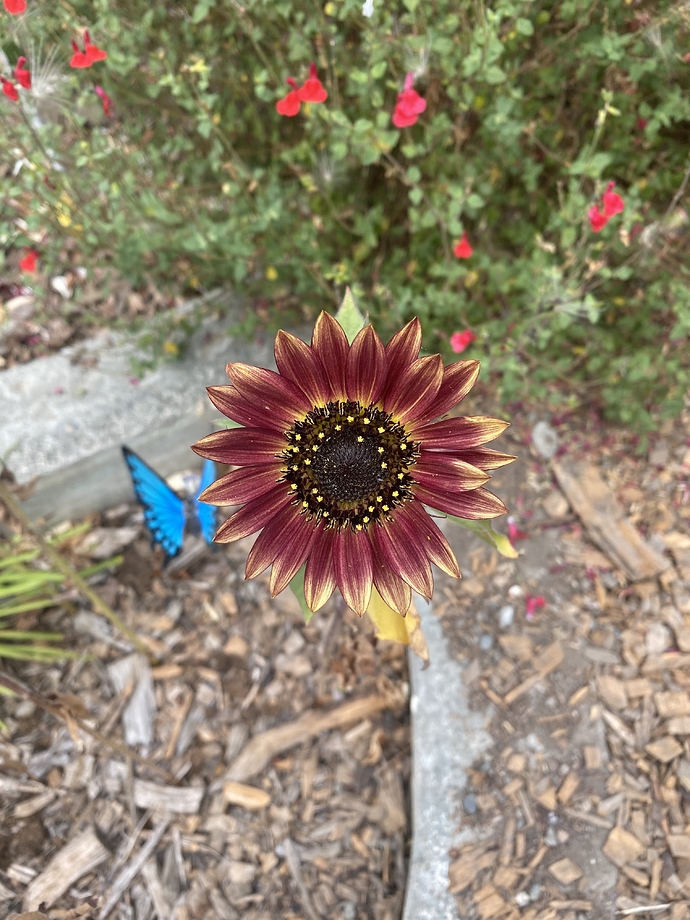 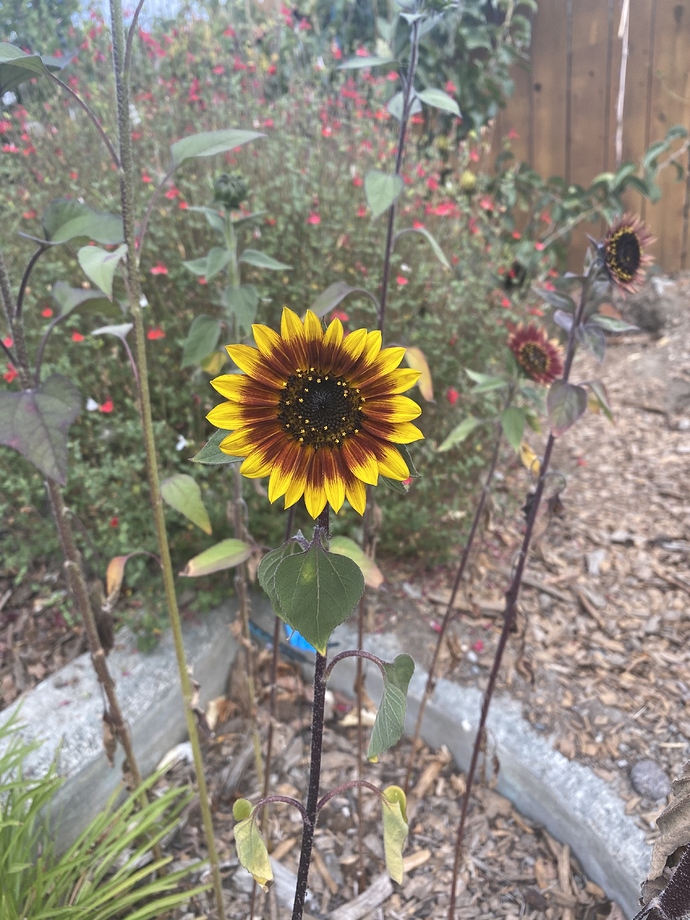 I planted the giant sunflowers in a not-so-ideal spot. It still gets some afternoon sun and has grown big, just not as big as I’ve seen on the videos 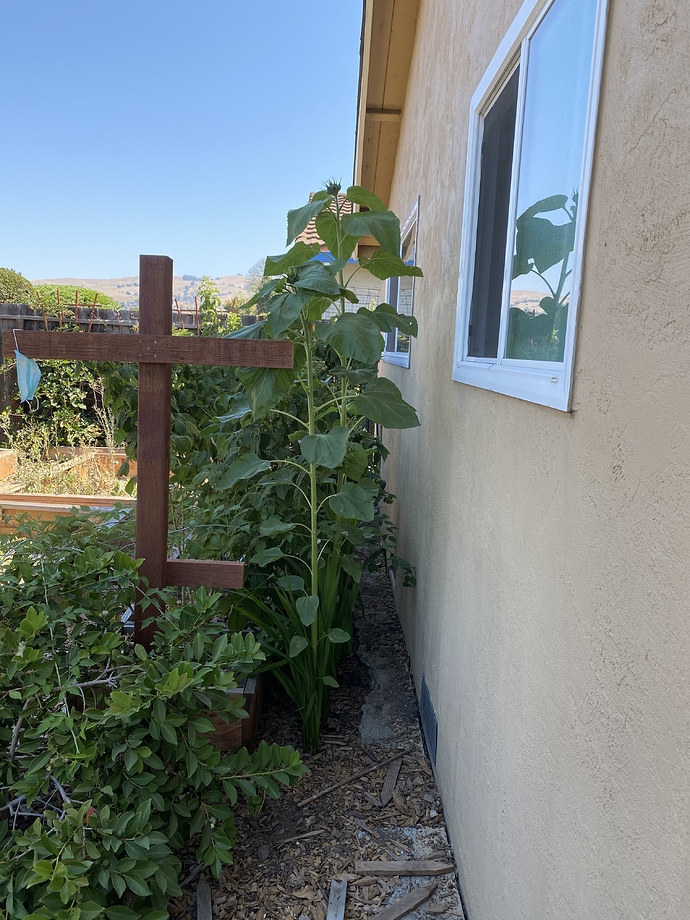 Tippy pretty color and shape. I like it too. Is it annual or perennial?

Perennial, I think. If not, it must re-seed as it comes back every year. The color is unusual, more blue than purple. 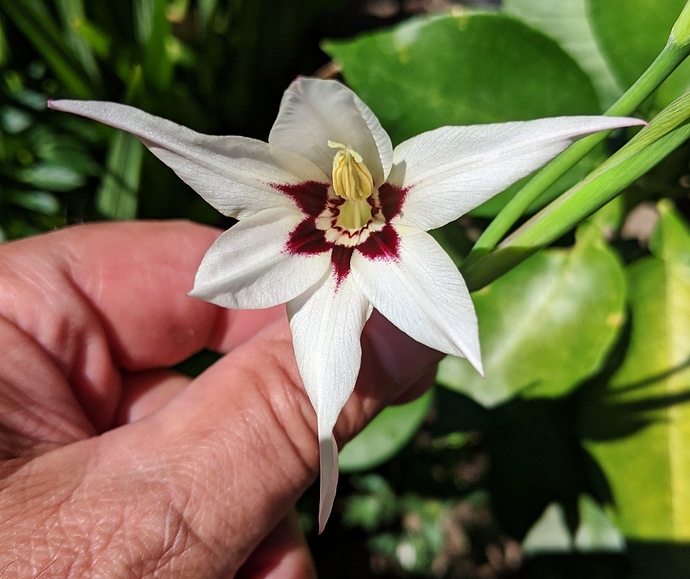 The main park here has a garden/pond and i just saw those globe flowers last night…had lots of bees on them. They also have some huge/beautiful liatris that were just covered with bees. I’ll have to take my camera down there. I need to buy new liatris and protect them in the spring because the rabbits chomp them.

@warmwxrulesRob,
Liatris/Gayfeather seems to be a favorite food of bunnies and groundhogs. They munched mine to nothing but stems.

I’ve seen huge Gayfeather. They are planted on rich soil, obviously, not mine.

Globe Thistle is a tough plant. I hardly water them. They have survived well. 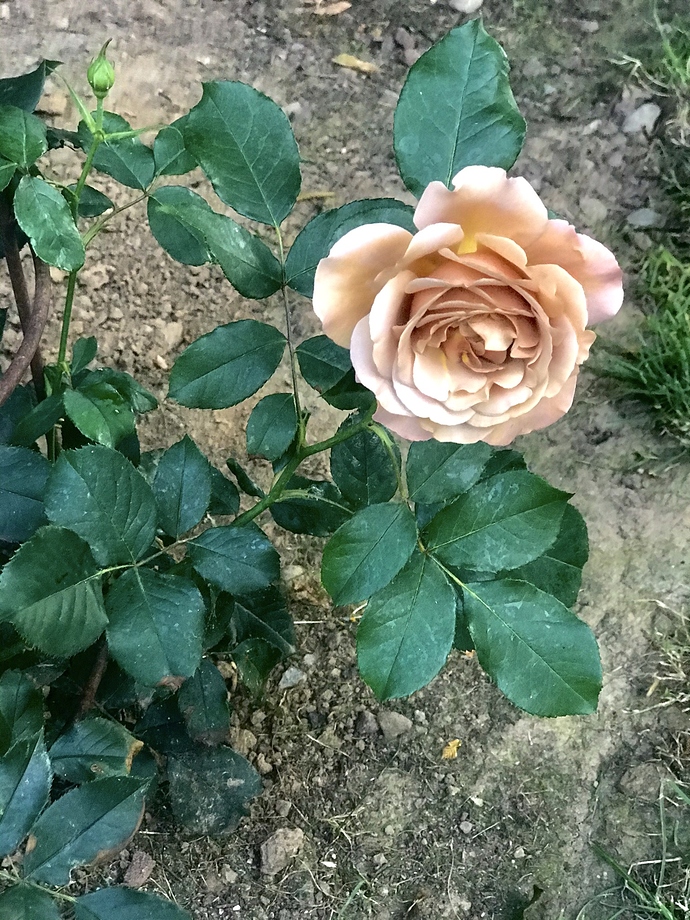 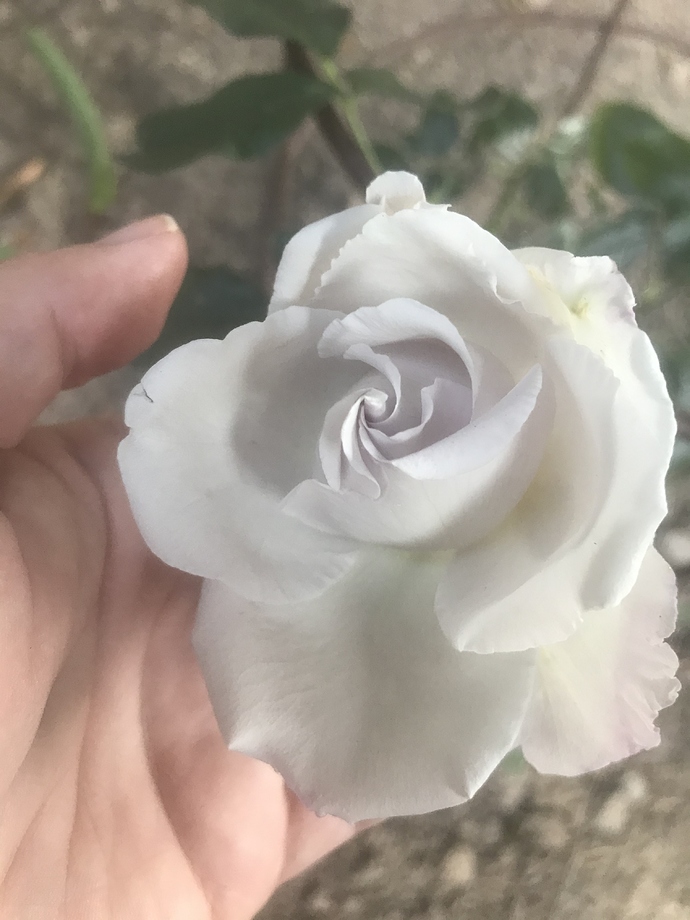 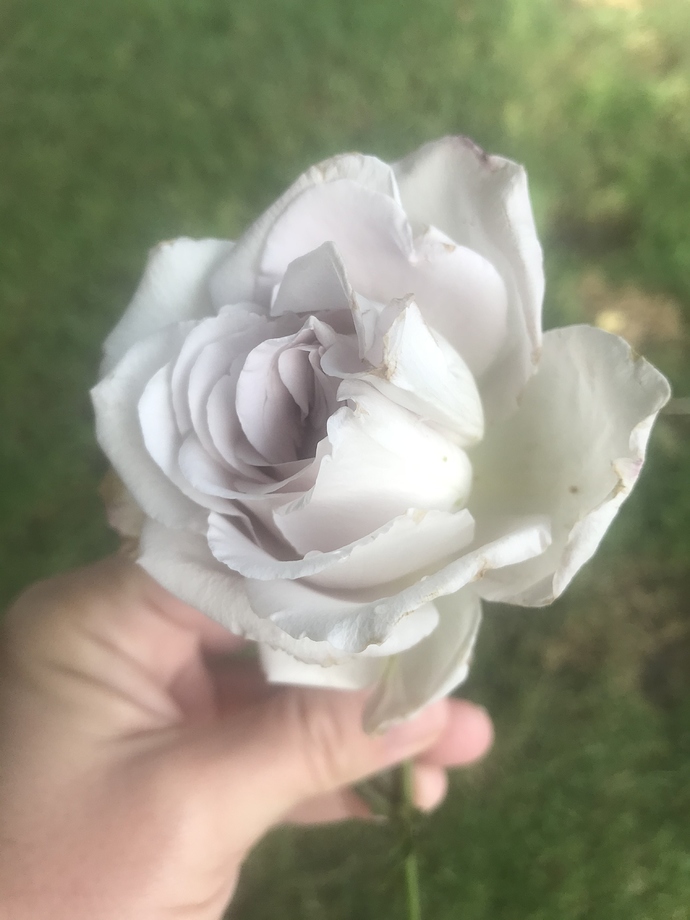 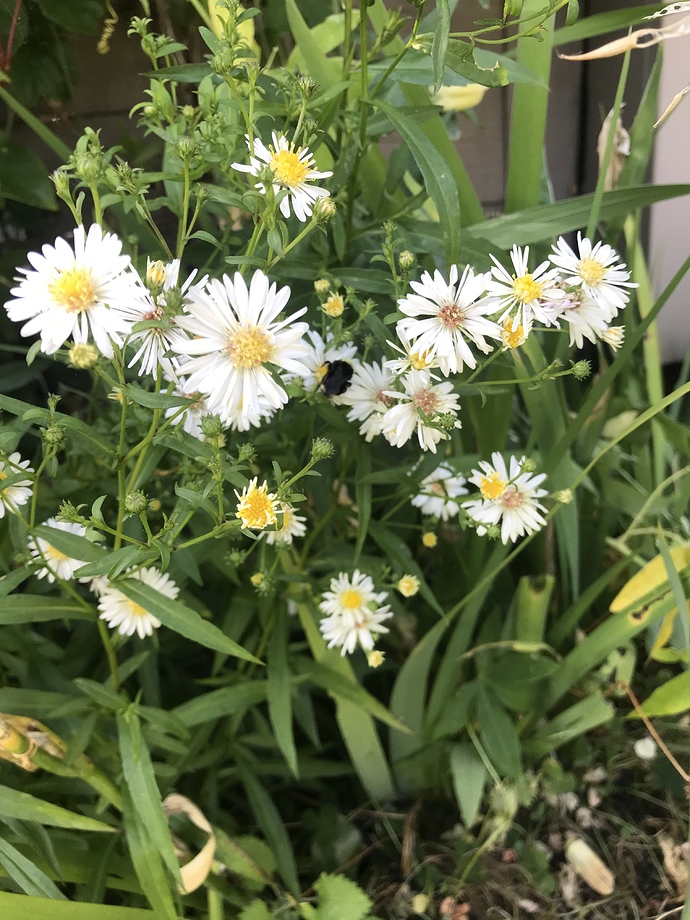 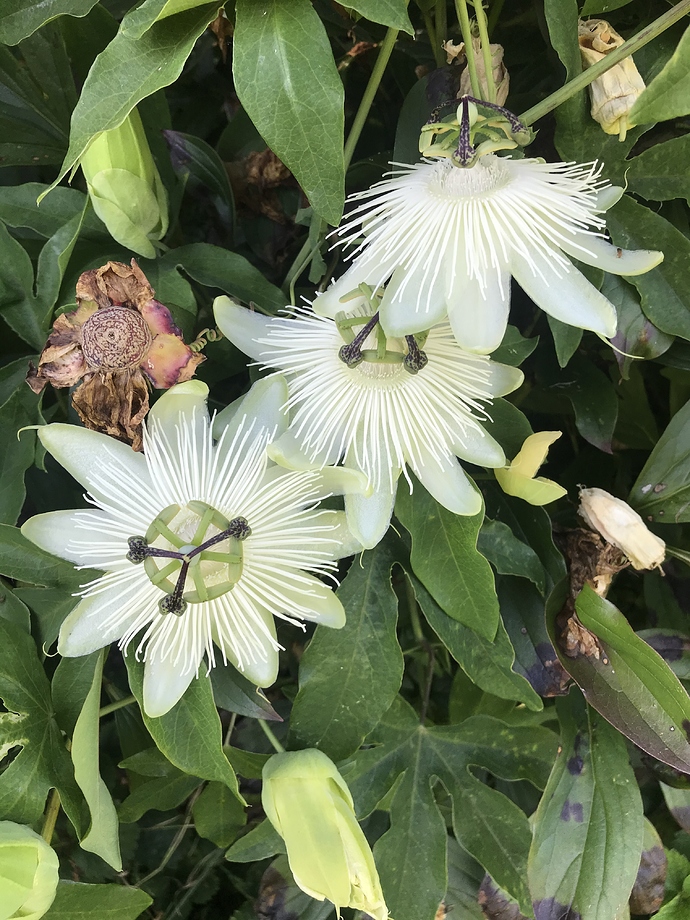 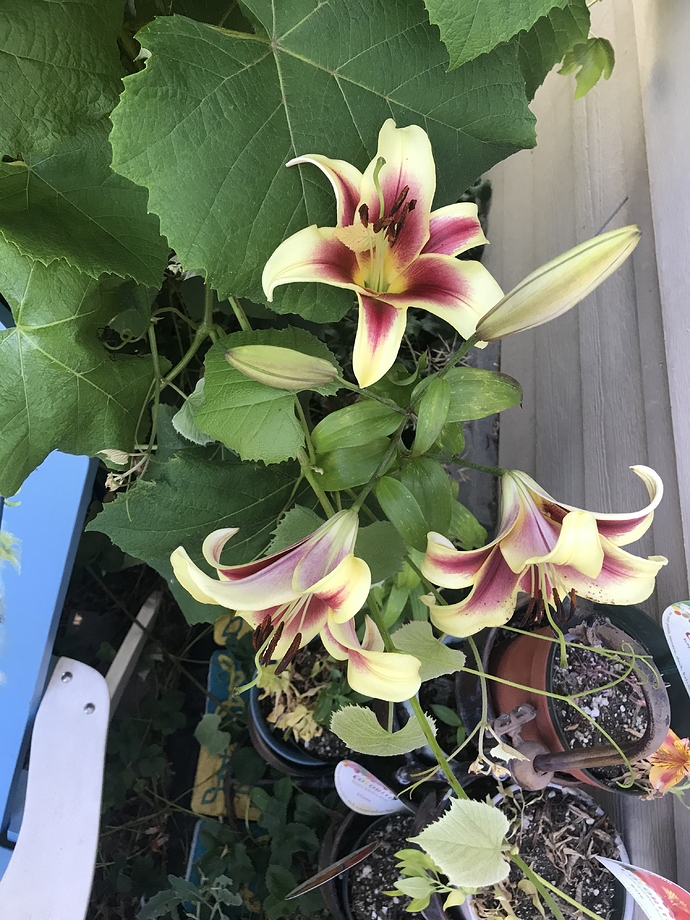 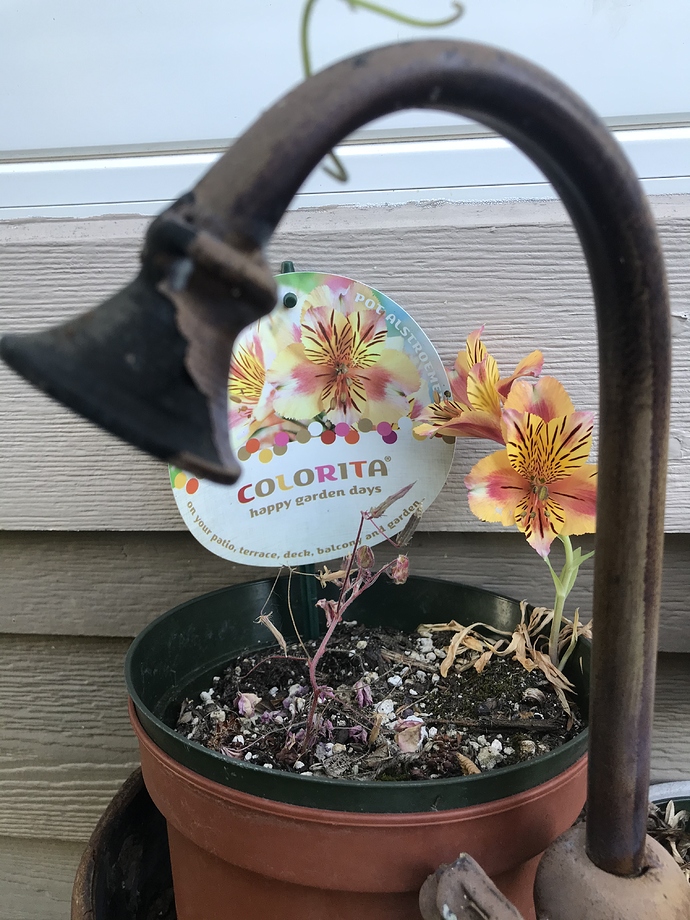 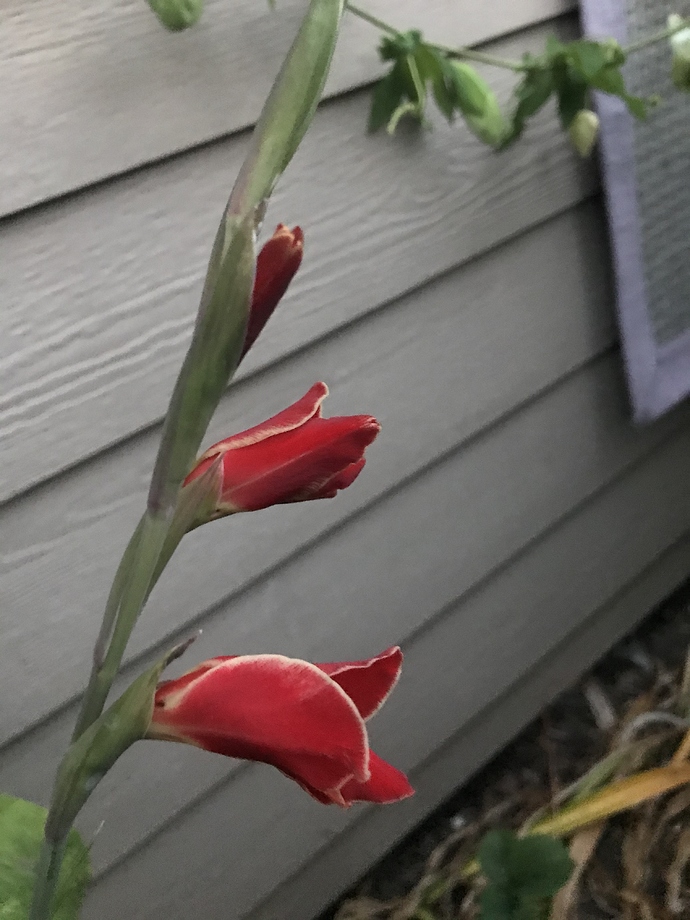 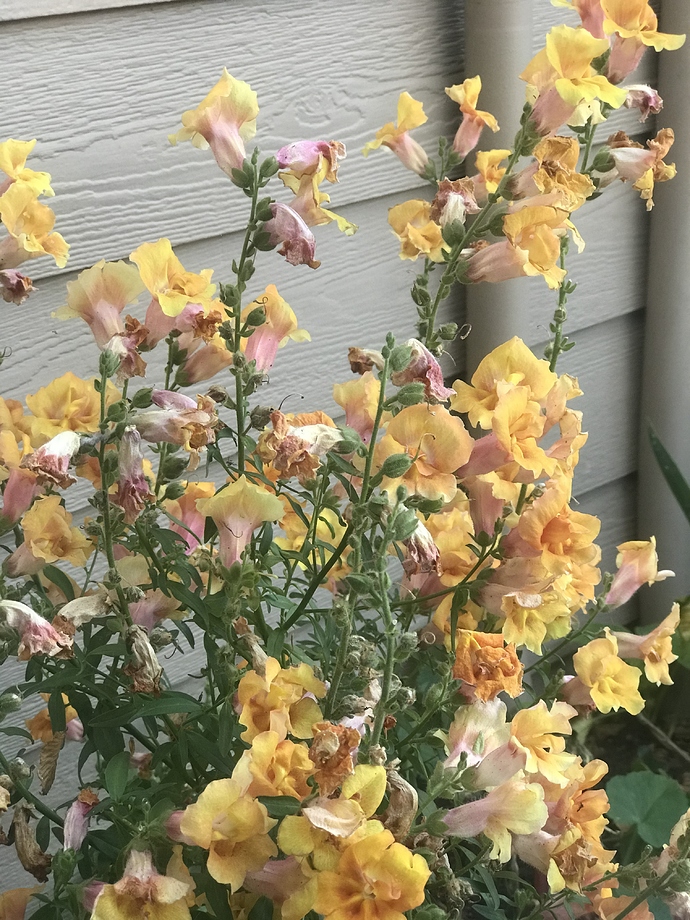 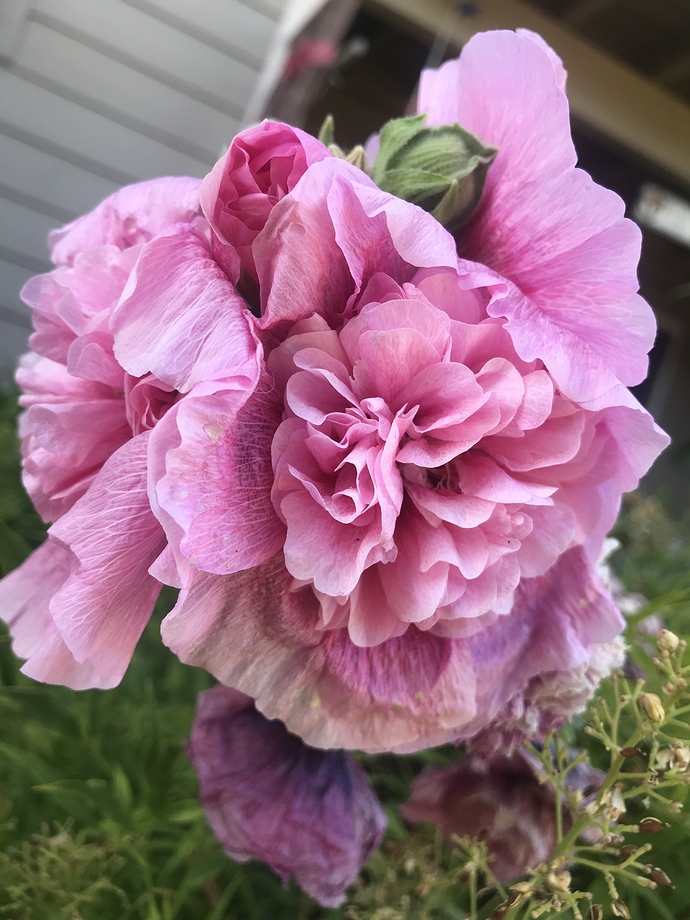 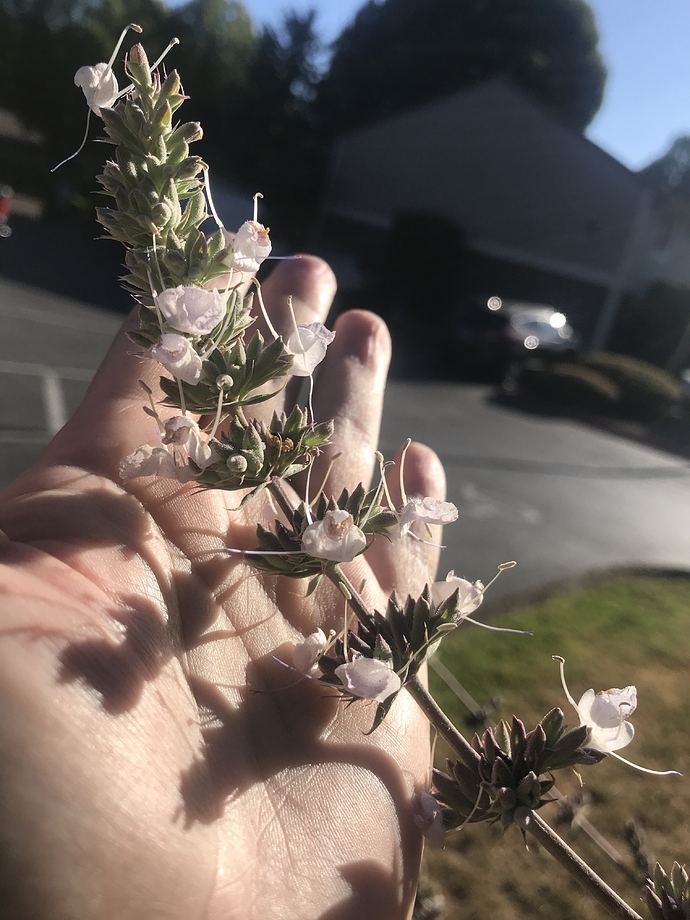 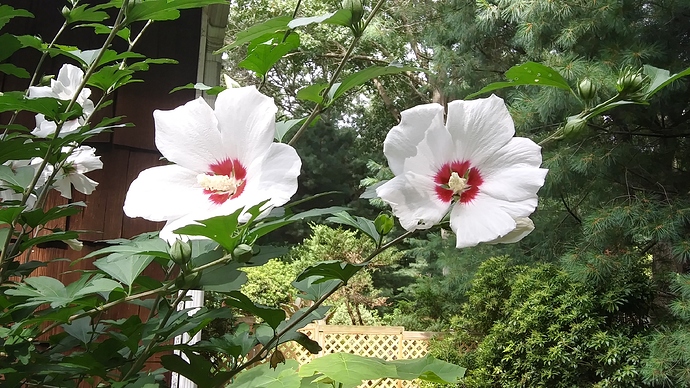