What intentional crosses are you making this year?

What’s everyone else crossing?

I am growing out Tam Kam X Chocolate Persimmon. Who knows what I am going to get in about 6 years?

I am following this thread with a keen interest. I hope to learn some tips from you guys on how successfully cross pollinate. It can be a fun experiment.

Nice list and much effort. Hope you get some good ones!

I’d suggest trying one of the red fleshed apples x your Black Amish.

I didn’t do any intentional crosses this year…but I have several red fleshed apples
that the pollination could only have come from a limited # nearby varieties.

How do you mark your cross pollinations on the tree or on paper so you can keep track? 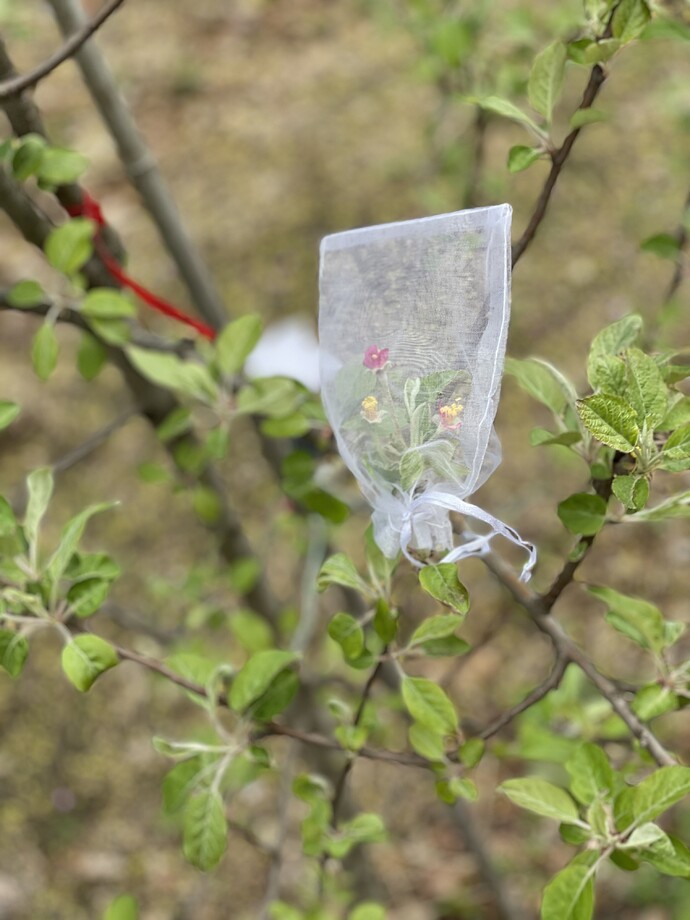 I have one heartnut tree, one butternut, and one northern prize walnut. Planted near one another. None have bloomed for first time yet. Have read that natural cross pollination is possible. Grown in 5b but will plant some on my wild forty. Zone 3b/4a

Perhaps Steven @SkillCult will chime in with his. I’m sure he has a ton.

I didn’t do any intentional crosses this year…but I have several red fleshed apples
that the pollination could only have come from a limited # nearby varieties.

I feel like those are just as worthy of planting out as intentional crosses. @mamuang was kind enough to share some apples with me last fall, and I planted out the seeds of Golden Russet, Frostbite, and a few others just because of how good the known parent is and how many other good varieties she has growing on her trees that were potential pollinators. I’m a little hesitant to do that with my own trees this year, though, because I’ve got a lot of cider apples in bloom for the first time.

He recently posted a video about some of his crosses. It would be a lot for him to list. https://youtu.be/UPR8snS-eCg

I did indeed make a lot of crosses this year ha ha. It seemed like crossing or collecting pollen was all I got done for quite a while. The original list was 46 parents and over 200 crosses. I didn’t do all those. Some I didn’t do at all and others I added as I went. It was more of a reminder list for the field. I leaned heavily on late hanging crosses. Mostly late hangers with other late hangers. The definition being that they hang on in good edible condition, ripening late, to at least December.

This year I got to use a bunch of my own crosses as parents. As an example of how my dummy version of apple breeding works, I have one small yellow seedling, nicknamed Ice Princess that I had off the tree on new years day in 2019. It is super crisp, (like crisp on top of crisp!), in a way reminiscent of some fine grained crabs. As far as I know, it is Grenadine x Golden Russet, so I crossed it with with late hangers, Russets, red fleshed apples, and very crisp apples. If an apple has more than one of those traits, such as Pink Parfait= very crisp, red flesh, hangs late, I’m going to make extra of that cross. Or a hedgerow apple I found, March Hedge, that hangs past February. It is super crisp, also yellow and very late ripening/hanging. Ice Princess got used on a lot of stuff, but another interesting cross is My Jewel, a late hanging/ripening apple that can taste very strongly of artificial banana. It has good, pretty crisp texture. Ice princess has had hints of banana, so mixing these two seems like a no brainer. Even though I don’t really like banana flavored apples lol, but i’ts just too compelling. Besides, then I can name it Banana Ice, which will make people that grew up in the 90’s think of Vanilla Ice and chuckle. And who (but me) wouldn’t want to try an apple named Banana Ice!

Other traits I tried to gang up in crosses are russets, very highly flavored apples, red flesh (even if the apple doesn’t show it, but I know it’s in the ancestry), early, crab apple ancestry and Scab resistance. Again, if I can combine desired traits, I’ll tend to make more of those crosses.

Some parent groups are:

Exceptionally high, rich or complex flavor: Whitwick Pippin, My Jewel, Hard Candy Cider, Black Strawberry, Sam Young, Golden Russet, Sweet 16, Ross Non-pareil, Allen’s Everlasting. I think I’m forgetting some, but I crossed a lot of these with each other to see what happens. I think that is a good idea to chase high flavor. I’m pretty sure if we do that, some truly mind blowing apples will result. Most intense here are probably in order, My Jewel, Hard Candy Cider and Sweet 16. That is just quantitatively speaking, not complexity or character. Many are late hangers as well and I think there is high potential to breed super late ripening apples with intense, complex flavors.

This year I have lots of new seedlings fruiting, and many of the new ones are more varied crosses of dessert apples than the first stuff I pollinated back in 2011. Also, quite a few of the maypole crosses are fruiting, mostly those that show the columnar trait, which seem to be a little more precocious. Getting a really good apple off a columnar tree would be something to write home about. I think they are MP x Wickson, MP x Chestnut Crab and MP x Pink Parfait. Fingers crossed!

What I do is write on a plastic strip tied just behind the pollination. If there is a tag like that, everything above that point on spur or even a whole branch, is hand pollinated. All other blossoms are removed. About mid summer, I write the cross on the fruit with a sharpie, so it is easy to keep track of from there, even if it falls off the tree.

im not yet at the making my own crosses stage. But have already tested vynil electrical tape (temflex brand) and a edding permanent marker. And it stays readable after a full season. And the bright colours on the tape make it easy to find stuff.

Seems similair to what you do. Do you use coloured plastic strips? Any problems finding them in fully leafed tree’s?

And do you bag the pollinated flowers? to avoid insects mixing in unwanted pollen?

@SMC_zone6 tell me about Black Amish! I’m more interested in the super dark red apples now that I have crosses of them with RF coming out with Red Flesh. I think I said in a recent video or blog post that I my original suspicion that very dark red skinned apples may have a synergy with RF apples seems like it may be proving to be true. I don’t have a lot of results yet, but I’m banking on it and making more of those crosses. I have King David, Black Oxford and Ingram. King David is awesome and a worthy parent. Ingram is pretty good, but it’s also a late hanger, and I think it may have some RF. At least I think I remember seeing some in one specimen. Either way, it’s going in the mix for late hanging, decent quality and tending toward black. Black Oxford hasn’t impressed so far. I’m definitely looking for more of them and would love to hear opinions on any others.

That’s my mistake…sorry, it is someone else besides SMC_zone6
that has Black Amish. My grafts of Black Amish have not bloomed yet.
(Nor has Black Oxford ).

I have a tree I bought as McInstosh from Miller Nurseries in about 1991…still not been able to positively ID. Black Amish and King David are possible, but not sure yet. As I get apples side by side from all 3 maybe I can discern.

Lost my intentional crossed first seedlings 2 seasons ago…a very juicy and sour but not bitter red fleshed crab apple x a very sweet red skinned apple. This spring got gone too fast, so intentional crosses I didn’t get to.

Predominantly my apples are in pots…and I’ve been able to isolate 3 or 4 desirable varieties away from other apple trees, so this year I’ll save some seeds.

Maybe next year back to intentional crosses. (Of course the ripening in Dec and January isn’t something I need as it might get to zero degrees or colder here!)

Enjoy and admire your efforts in apple breeding, SkillCult.

King David has done very well for me, too, and I’m similarly disappointed by Black Oxford in this climate. I have Black Amish, but my graft hasn’t fruited yet, either. Probably next season. Other dark red apples that come to mind: Black Limbertwig (will fruit this season) and Viking (interesting and dark red, but not a late hanger or keeper). Cornish Gilliflower was pretty dark here, and a good keeper, but I ultimately frame-grafted that tree with Rubinette.

@SkillCult, you might have a look at Viking, if you haven’t already. It has some similarities to the Williams’ Pride that you’re already working with (and is probably related, as a PRI apple), but it’s a bit later, a bit darker, and even more aromatic.

tell me about Black Amish!

Like @BlueBerry said, that’s not one I have. I think you’ve got most/all of the dark apples I have: Arkansas Black, Black Oxford, Blue Pearmain, King David.
I know you’re doing a lot of breeding work with intensely flavored apples. If you don’t have Frostbite or Pipsqueak, those are two you might want to check out. I’d be happy to send you some bud wood this summer if you want.

Frostbite is top of my list to acquire for breeding. Can you still get pollen this year? I’d love to get some pollen and start using it next spring. It has crab genetics too. Never heard of pipsqueak. I don’t think I have arkansas black actually. There are very common obvious things like that completely missing from my collection.

I also likened Viking to Williams’ Pride. I don’t recall it being very dark, but I may just not remember right. I think I looked it up and it wasn’t related, but maybe it has some common ancestry. I don’t remember for sure. What I do remember is the high, complex flavor. Also, apparently it was the only non resistant variety selected from that project to breed scab resistant apples, so that tells you something about it’s quality. I imagine it still has some of those genes that could express in later generations though.

I have some limbertwigs, but I don’t think Black is one of them. I’ll look into it. I am pretty happy with King David as a parent, but it would be nice to mix it up a bit and add more. Also, to test my theory that there is synergy between RF and black apples toward RF expression. Make RF crosses onto multiple black apples and vice versa, and see what happens in the first generation. I think they are awesome. Look how viral that photo of alleged black apples went recently. My Black RF, Black Strawberry, is growing on the North side of a pretty big tree and it was pretty stunningly dark. Photo attached. And it usually photographs lighter than it looks in person. Good chance all or many of the black apples are actually related. For now, Ingram is the second choice. If you want to trade off black limbertwig and Black amish, hit me up. I’d like to add those.