What is wrong with my cherry?

Well, it’s been a beautiful but somewhat frustrating Spring here in California. Many of my bark grafts didn’t take because of the onslaught of slugs that shaved down the new growth and I didn’t see until too late. It’s the downside of all the rain we’ve had.

But this is the most troubling thing. My Giant cherry that I just got from Arboreum is looking sad and droopy. Here it is: 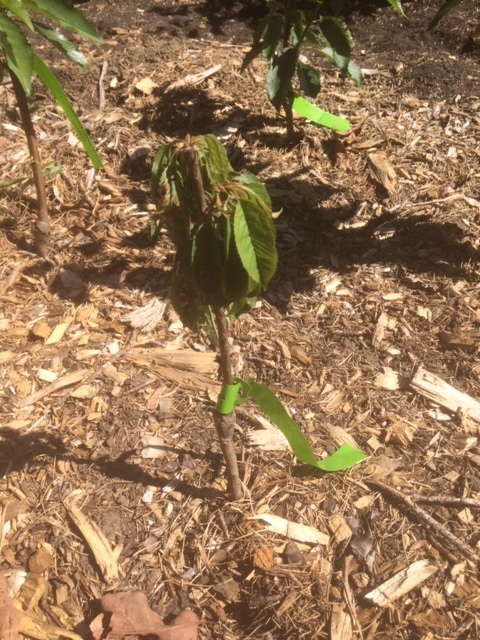 We’ve gotten plenty of water but not too much, I’ve mulched, the soil isn’t dry, and you can see in the background that the other cherries I’ve planted are doing well (high density planting, of course). The Lapins (the shadow behind the Giant), which I planted first, is going gangbusters, the Cristobalina and Merton Bigarreau are also growing nicely. I don’t have moles or gophers, and I don’t see that it’s infested with anything, but there have been some nibbles on some of the leaves on all of my cherries.

I can’t imagine that I need to feed it, since I planted it 2 months ago. But I’m sort of stumped. Could it be just a bad batch/fruit tree? it perks up a little in the evening, but it hasn’t been hot (though it is 80 today) and it hasn’t been putting out any new growth. I’m a hands-off person, in general and I haven’t done anything but put it in the ground.

Any ideas? Help! I’d rather not see my little tree waste away…

Any ideas? Help! I’d rather not see my little tree waste away…

When they look like that under the conditions you describe it’s probably a root issue. If that’s the case there’s not much you can do.

The one issue you could turn around is if it’s just too dry. But if others planted at the same time are doing well you are probably out of luck.

If it is a new planting, and if it recovers in the evening, then it sounds like heat stress - plant can’t cool itself off. To reduce the stress until the plant roots improve I would shade it some in the heat of the day. I can’t tell but it looks small enough to place a tomato cage around it and just put some aluminet or row cover over it to shade it from maybe 12 to 3. If it continues to be heat stressed you can lose it. If you baby it like this for a while you can likely save it. Then after a few weeks expose it to more and more sun gradually.

Sometimes I’ll spray my heat stressed plants w/soapy water - I make my own from soap made from fat, but if it is real stressed, I’d cover it.

Any chance there is an air pocket between the roots? Did you soak the planting site after you planted the tree? If not, do it now, create some barrier around planting site to prevent water run off, add water to the point of standing and let it soak in. This should settle the soil around roots. And yes, shade the tree! And do not feed.

Thanks, y’all. At this point, it’s unlikely there’s an air pocket, but I will try shading and giving it a good soak. I did soak when I planted it (and soaked the roots, too). After 2 months, and as much rain as we’ve had, I would think the air pockets would be gone…but…who knows? I will try it.

The thing is, too, that it droops even when it’s not hot, we’ve had a very mild spring, overall. But I’ll try the tomato cage, too. It’s hot today and it’s looking even more droopy. I’d like to think it’s a root issue, though, since the other trees are doing just fine (2 are from Arboreum, too).

Thank you for your help!

When I lived in CA I was always at war with gophers. Even with species whose roots they didn’t eat, their tunneling would often destroy root contact with soil. I would create a concave well, water and walk on the soil with my bare feet to firm up the soil and provide root contact with it. Can’t say that’s your problem but it is another possibility.

Even in the northeast, moles sometimes create the same problem, but usually only enough to affect annuals.

that it droops even when it’s not hot,

Sorry, not just heat but sun too. You can answer this in just a few days by shading the plant from the sun.
Some plants suffer more transplant shock than others. In my experience, if the soil is high in microbials this is less of a problem…or the plant recovers more quickly.

I would also consider the possibility that the tree may have had a bad root system with which to begin. I would check the rootstock to make sure it is still alive (scratch test). It is not usual for a tree to push out initial growth with its remaining energy only to die if conditions are not suitable for new root development. I learned that lesson last year. My tree looked almost identical to yours, but slowly deteriorated until all branches were dead or dying. Interestingly, that was my only tree that did not make it and it was also a cherry. I can’t remember the rootstock, but you may want to consider another option if this one does not recover. I would also try digging down a good foot and making sure the water is reaching all the way down. Best of luck!