Got my first peaches ready to pick tomorrow and I’m excited. I took these pics today and I’m always amazed at how early these 2 peaches are for my area. I have picked them in May, and this year its only the first week in June. I have 2 varieties that start my peach season each year. One is a wonderful unknown tree that was the only fruit tree on my land when I bought it 10 years ago. The Other one is Florida King. 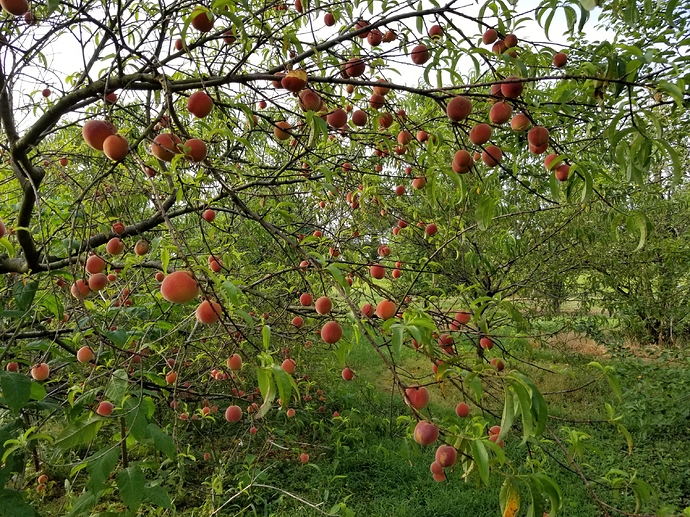 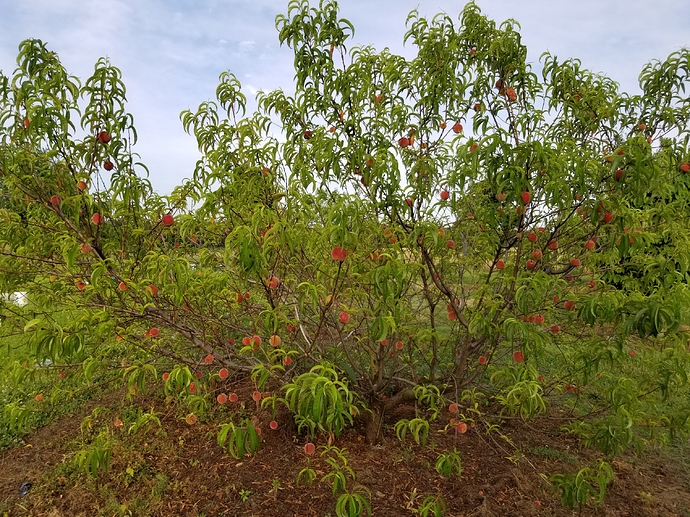 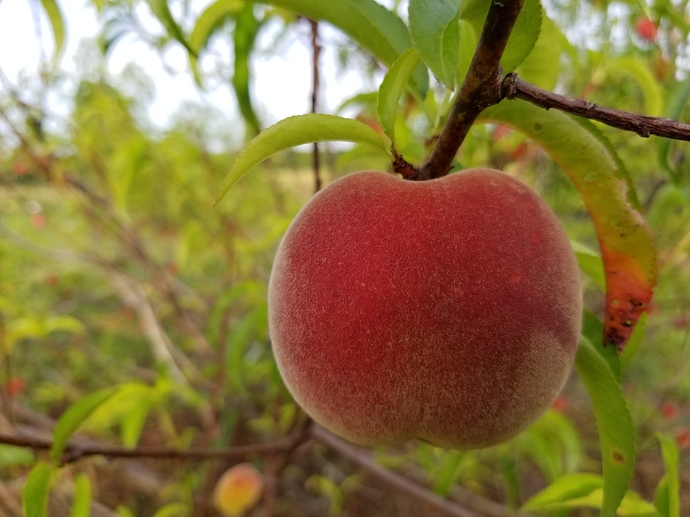 As much as I love getting early peaches to start my season, I won’t pretend they are as sweet as later peaches- they just aren’t. But they are better than store bought peaches, and when cooked in a cobbler or anything with sugar, they are just as good. I’m grilling some with butter, brown sugar, and cinnamon tomorrow and can’t wait. Let the peach season begin!!! Good luck to you all.

I wonder if it makes brown rot a bigger problem. It would be great if it works on critters too! I have a feeling it would be like feeding them cherry pie on the tree though.

Yeah… It may only be viable if there’s also a physical barrier keeping 4-legged animals out. Don’t know. Hopefully someone will give it a try and report their results…

Well, today for the first time I got to taste fruit from my 3 year old Consort Black Currant. Oh Boy.

IT was the worst tasting fruit I have ever put in my mouth!!! I am soooo disappointed! How do people eat those things??? ha. Just awful! YUCK! Well, that is 3 years and $20 bucks wasted. ha. No, its always fun growing and trying things. But wow are those nasty!

Before you give up…try some jam out of them. Mrs G sent me some great jam from currants.
I agree the fresh off the bush fruit isn’t very tasty.

I don’t have enough this year but its a nice healthy bush/tree and I’m not one to remove anything productive (even if I’m not a fan), so next year I’ll try that. I’m surprised they are so bad ! I have ready that in Erope they use currants much like we use grapes- candy, deserts, etc. I can’t imagine that…all I can imagine is there must be some better flavored ones out there! ha

really try them in jams and sweetened juices. consort shines when processed. i find its better than others like this. some may be better fresh but consorts shine in jams and juices.

I think consort is known as one of the strongest tasting varieties.

I had the same reaction when I first tried them! I’m not sure if my taste buds have just adjusted or if they’ve legitimately gotten milder, it’s hard to tell, but I feel like they’ve gotten milder as the bush has aged. I agree with everyone saying to process them and see how you like it! I have baked them into muffins too and been happy with the outcome. I’ve always thought making a syrup to add to sparkling water could be a nice use for them too.

City ! They are for cooking and making jam, now that is heavenly. Raw black currants are not a favorite of many. The red, white, and pink, currants almost have no taste at all but a bit more sugar content. They all still make you pucker ! 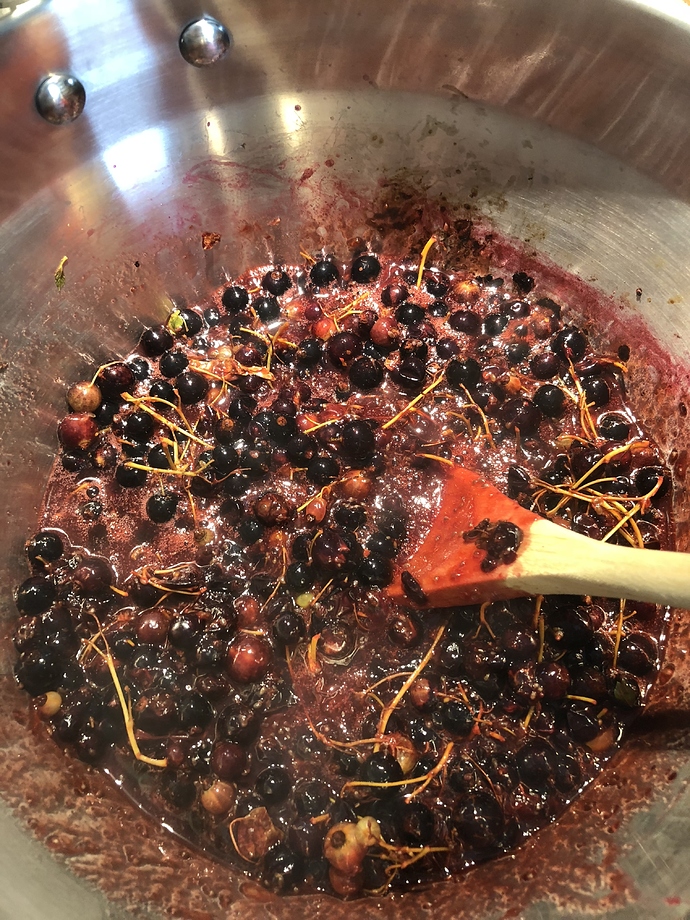 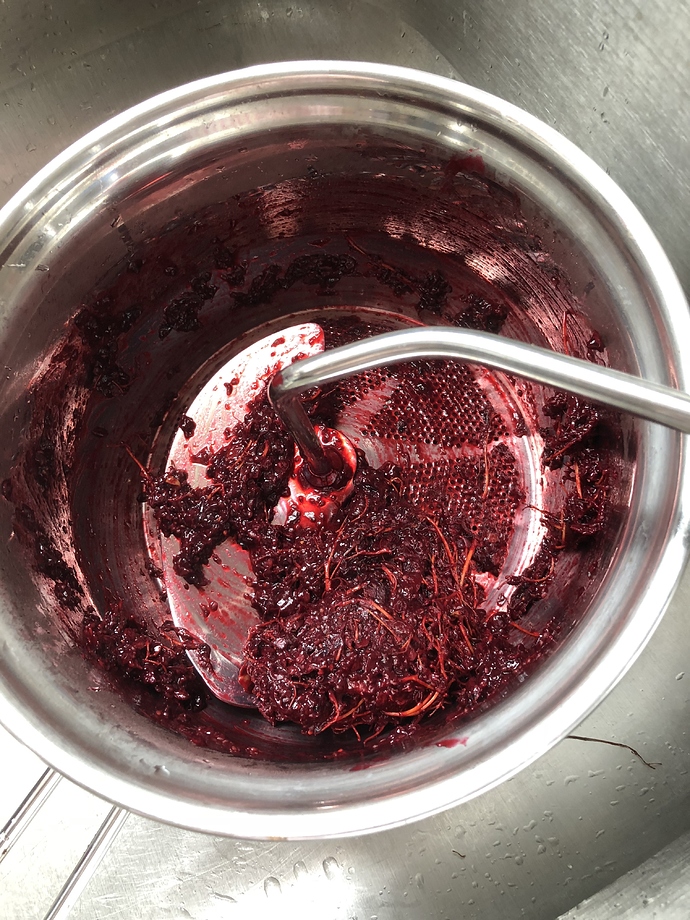 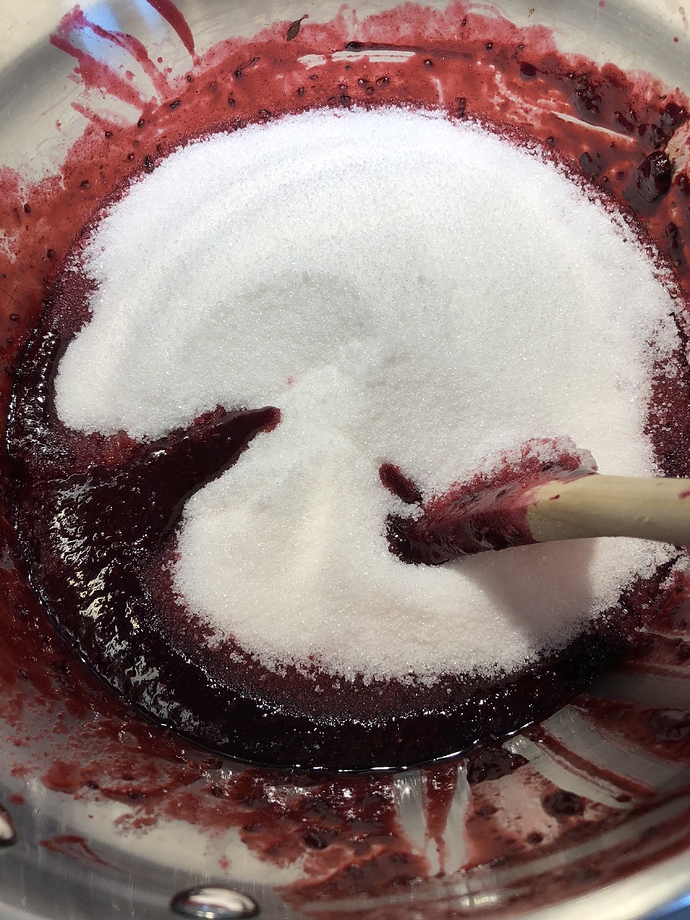 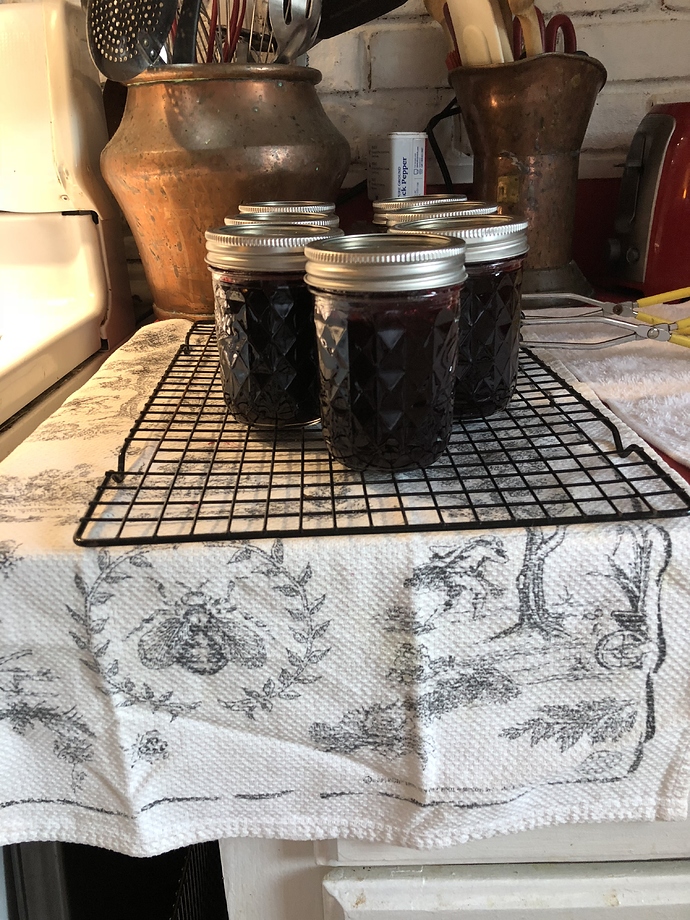 That is just so great! I love those photos. I figured you would know a lot about currants since a lot of what I’ve read says they are big in Europe. I also knew that they were mostly used to make things with and not eating raw, but other fruits that are best used to make things (gooseberries, for example) don’t taste this bad to me! ha… The currants have a musty, almost spoiled taste that I just can’t fathom being good even in a jam/jelly. That being said, I actually am a good jam and jelly maker, so I’ll give them a try! On second look I may even have enough to make a small batch this year.

Thanks again for the encouragement.

@Katie_didnt_Z4b OK…you and others are wearing me down! ha I’ll give them a chance and try to make something with them in it. Thanks!

What is this magic bowl you are using? Looks like it could make life a lot easier instead of stemming and pitting hundreds of plums.

Its an xox or oxo food mill. I toss the entire Stem of currants in the pot when I cook them, just use the finest grate (the food mill comes with three sizes of grates) I process the entirety of the cooked berries and after the mill the pure juice and some skin makes the smoothest jam. A bit of water, sugar to match volume of pureed curants = jam !

I have to agree with Cityman. We tried some jam, and even that was barely tolerable. Even the birds didn’t go after the ripe Consort currants!

For what it’s worth, I can attest that Crandall makes a very nice jam, despite being uninteresting (at best) as a fresh fruit.

Today I finally harvested a few cherries from my Sweetheart cherry tree. Brix is only 18.5, but it tastes good already. Very happy. It is supposed to be a late season variety, so probably another week or two.
I see others reported brix like 30. That is so sweet. Hope mine will get this high later. 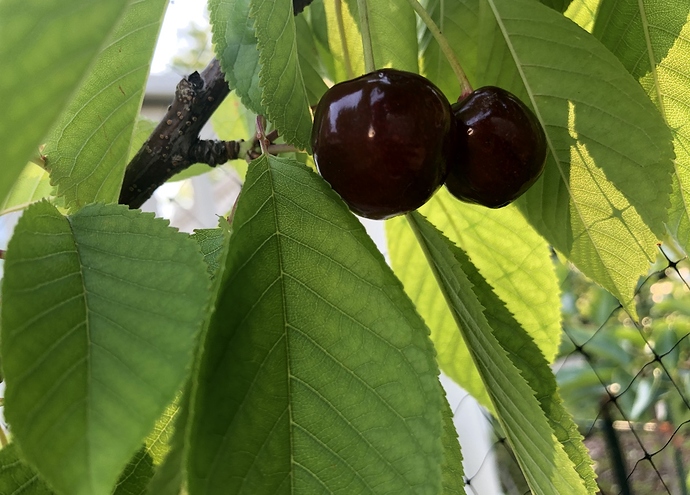 Went out to survey my cherry tree today and it looks like the Indar may have stopped the brown rot. Will spray again tomorrow.

black currant jam is the best jam I’ve ever eaten. love a good raspberry jam but b. currant beats it hands down! I’ve even basted a easter ham with it. its also a good side for venison, turkey and pork chops. my 65yr. old neighbor never heard of them and i gave him a jar of jam. he was so impressed he wanted some bushes for himself. i rooted him a few cuttings. he got his 1st. berries last year. should have enough for jam this summer. I’ve stuck spring pruning all over the yard. even in less than ideal spots. every one is putting out new leaves with no care. last time i counted between grown plants and new stuck cuttings i have about 25 b. currants. in the next few years i should have enough fruit to get me through the winter with jam and juice. they are one of the few things here that will grow in just about any soil or conditions except very dry or full shade. a couple shovelsfull of compost keeps them vigorous and happy.

i don’t mind the seeds so i wash mash cold then add no cook pectin/ sugar. jar then freeze. i find not cooking keeps more flavor than cooked. i do cook and can some to give to friends.

Finally, the second and final round of stump pullin’ began this morning! Should be planting trees out this fall. 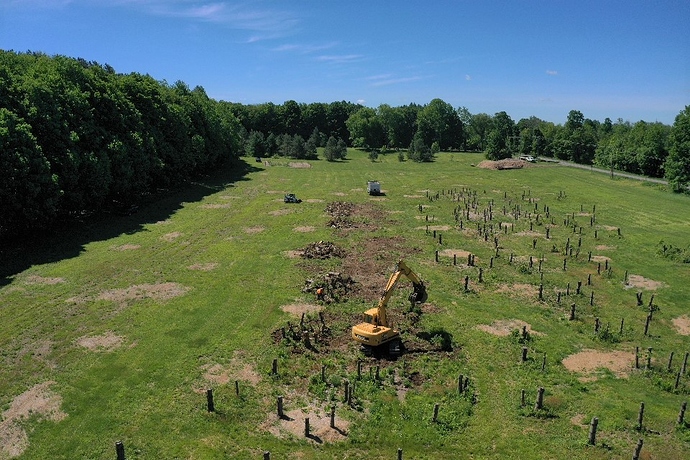 So many strawberries!!! They don’t last long in my household. 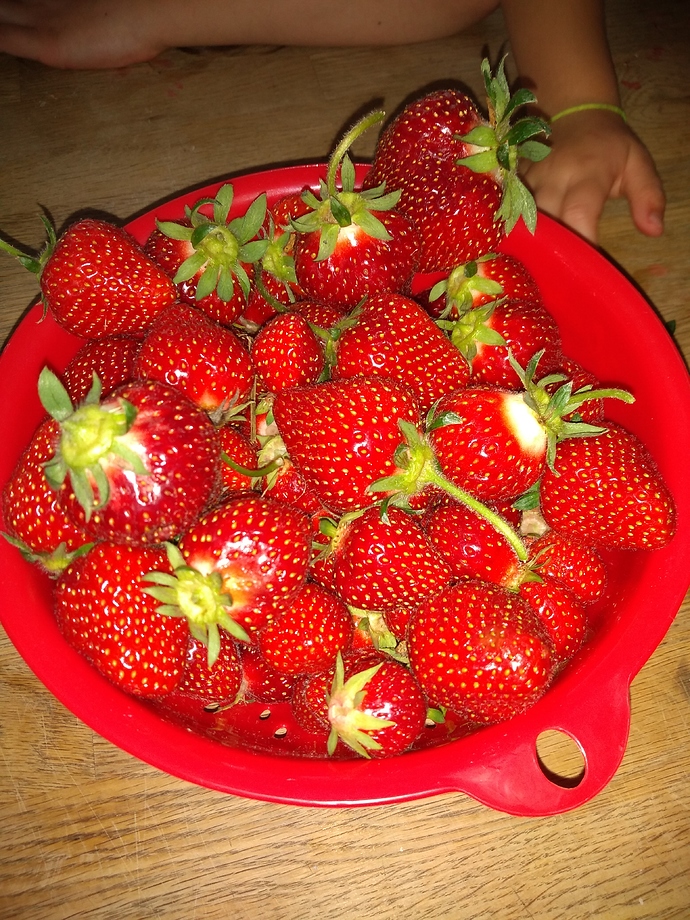 I made my wife’s favorite breakfast, quiche with breakfast radishes. 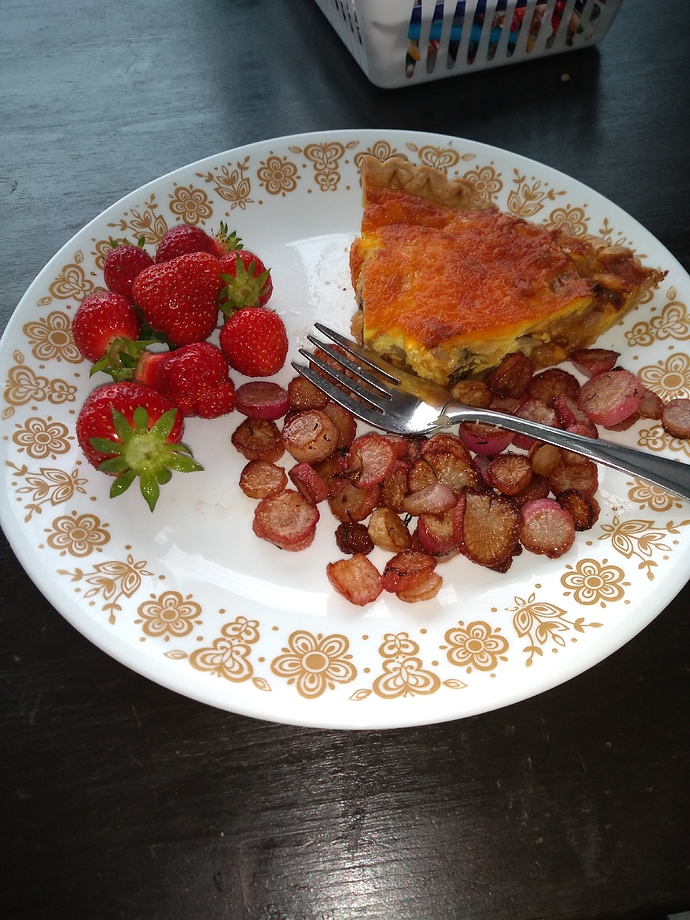