I had no functional energy today. I managed to weed around a Rose of Sharon where the weeds were threatening the plants that I invited there and a tiny vegetable patch that was similarly overgrown. I’ve got lots of tiny carrots from the latter. I guess those seeds prefered to wait until this year to join the party.
I also got a tiny little fingersop in the mail. It won’t make it outside around here, but I’m curious if I can manage to get it to adulthood.

Despite a very cold April it looks like a great fruit set. 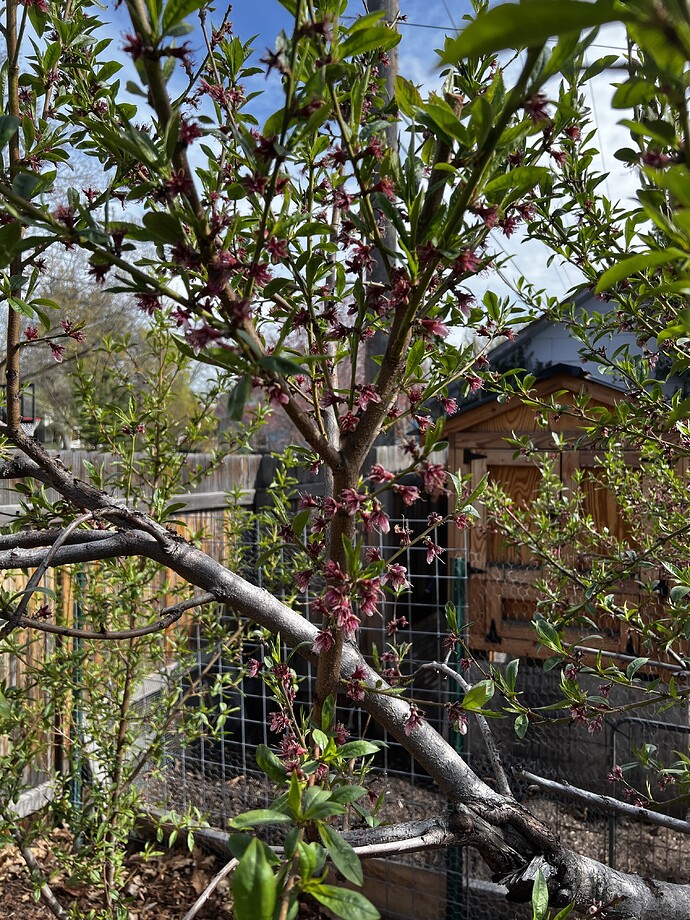 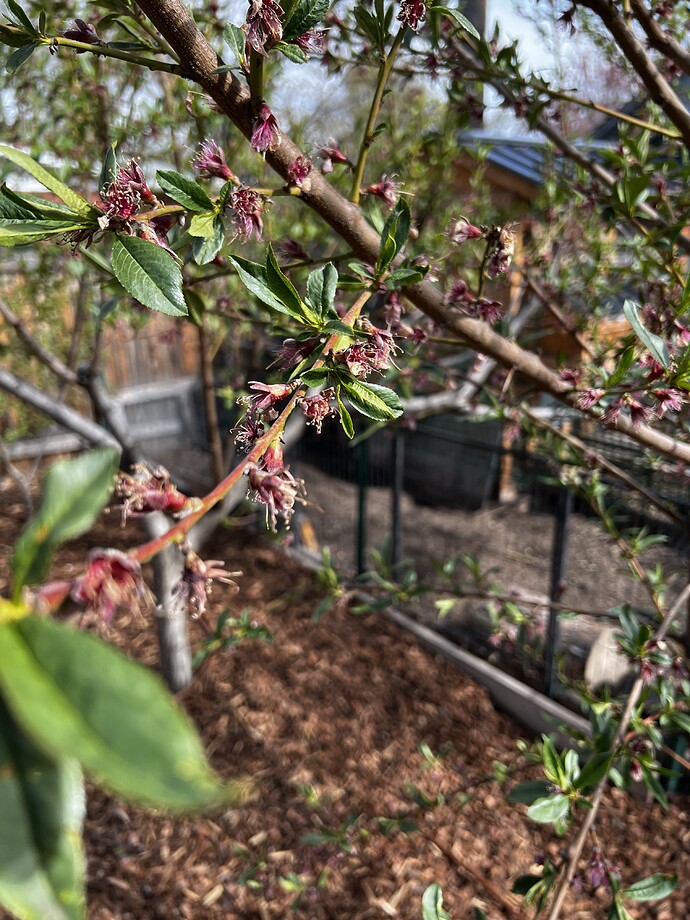 I looked at my tracking of my overenthusiasm today. Out of about 45 orders scheduled to arrive since just before Christmas, I am still waiting on 4 to ship. One of those is just ramps off etsy, but as it’s in the pending queue, it get’s included. There were at least thirty different vendors, and probably above 35. Of all of that, my negatives have been pretty small. I received the wrong Jujube, for which I had a replacement in less than a week; I had two named variety arctic raspberries that looked like sprouts when I openend them which I was unable to keep alive (although they may be doing something in ground still) although the threads on here suggest they were destined to disappoint me anyway; I had one apple tree that may have had a fireblight strike developing; and, I had one antonovka rootstock that had so little roots that I am wondering if it is going to leaf out like the rest of its cohort. Uncertain yet is a Pedro Walnut that I can find no budding on yet (planted in February), although the native black walnuts in my yard are barely showing leaf-break, so I cannot yet say it it definitively behind any sort of curve. I just wish I could say for certain where the buds are.
Anyway, it’s time to dig a couple of new holes and find a garden hose to drag around the potting grounds.

Also, you’re likely already aware of their Allelopathic nature, but in case link

Yeah, the juglone factor is a bit of a sore spot for me at present. I love black walnut trees, but the generations of squirrels who ran amok on this property before I bought it loved them more. It’s difficult finding a spot without risk more than fifty feet from the house. I removed a lot of seedlings and saplings (up to 4" calipres.) The seedlings mostly went to a farmer with a plan for them, but the saplings are awaiting my decision to either build something out of them or haul them off. (Most of them are further along than ole Pedro, despite a lack of roots.)
I just came in from investigating two of last year’s trees that I suspected were dead. I was unfortunately right. I’m not 100% certain, but suspect Juglone got my S. domestica. My little medlar that was not leaving out turned out to have been buried without unwrapping the graft. The aronia rootstock may push up some new growth, so I could try again next year, but it was a redundant one, so I put it back in a pot and will make another plan later on if it does come back up.

We’ve got a lot of large black walnut growing here too. Luckily they’re just far enough from my home orchard space to not cause a problem though. A few years ago we harvested a bunch of 'em. Not so productive the past few years though…

Oh and in the spirit of “what’s happening today”… Over the past 3 days I’ve thinned and bagged a number of apples and peaches. Trying nylon “try-on socks” for the peaches. Fingers crosssed that everything with fruitlets now will result in tasty fruit later. 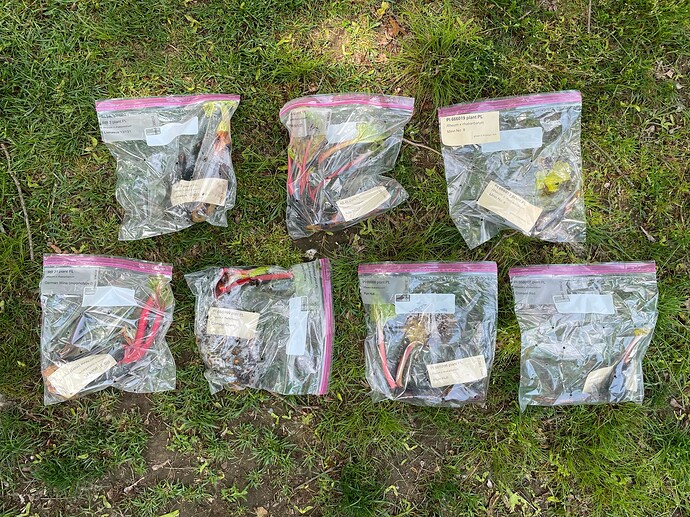 Got a nice batch of rhubarb from the usda to trial. Super happy with these.

Howdy back at ya.

Today I finally put a bunch of seeds in the ground. Hopefully the robins won’t help me out too much. I also up potted S. torminalis and “Showy Medlar,” which looks more like the torminalis than it does M. germanica.

The rain is teasing me here. It keeps promising to water things for me, then giving me less than I could blow out of a straw. It finally gave me a brief shower after I watered everything in myself. It’s been playing this game all month. But today refilled at least one of the rain barrels, mostly because the gutter is apparently stopped up.

They had purple mangosteen at the local Asian food store. Is there a better tasting fruit? It’s hard to beat this flavor. 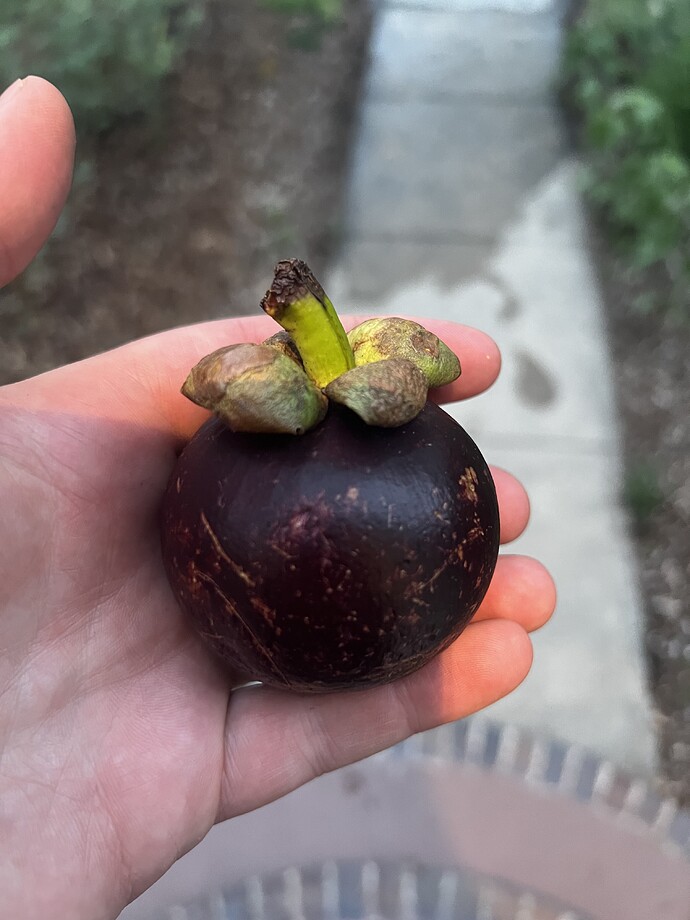 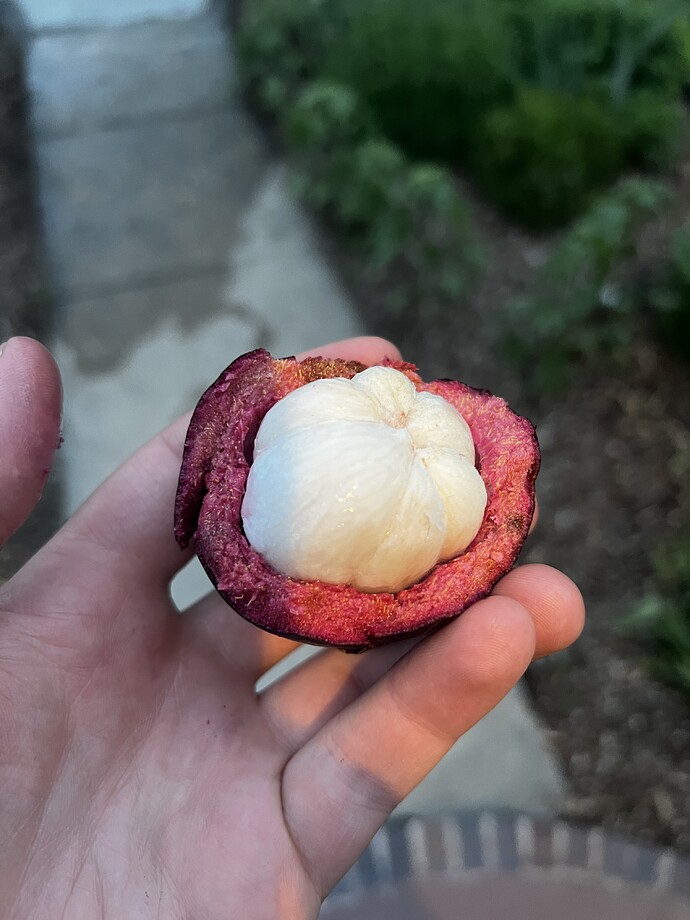 I got some that were grown in Mexico. They were in good shape, but not nearly as good as the ones I’d had in Singapore, I assume were from Malaysia.

I’m in Thailand right now. Have some mangosteen with my name on them. Will probably try tomorrow. I’m looking for Cherimoya or Custard Apple. I saw on the side of the road as we whizzed by, but not in the market or grocery store that I went to :(.

Unfortunately, won’t have much more opportunity to get out and look.

My wife is from Thailand and the next time we visit we are going to make sure we overlap with mangosteen season. Her brother lives on a durian farm in the south which also happens to have about a dozen mature mangosteen trees. It sure would be cool to be able to pick them right off the tree!

I put some grafted apples in the nursery bed this evening and then walked the orchard to check the trees. A huge flock of Cedar Waxwings were perching in my trees (making me cringe a bit). I’m guessing the Shadblow Serviceberry’s that are native here have mature fruits, the waxwings usually come through and devour those fruits and disappear a soon as they’re gone. I’ve never seen them in such a large flock. Didn’t have my phone with me, no photo’s.

I actually have two apricots that might ripen all the way! Squirrels have been terrible in my orchard the past few years, and frost usually hits my apricot blooms.

One is Sweetheart. The other is Montrose. I had a lot more of the Montrose, but some type of small green caterpillar injured most while just in the shuck. I’ll know to spray spinosad or something at the end of bloom next year.

Cross your fingers I actually get to taste an apricot or two from the tree, lol! I have 3 standard trees of them for goodness sake

my adirondack gold blooms were fried by a frost again this spring. i grafted wescot and a scion of my black ice plum to it. all are growing vigorously. plan to graft more late blooming apritots next spring.

Curry tree is flowering for the first time. This was grown from a seed 2 years ago. 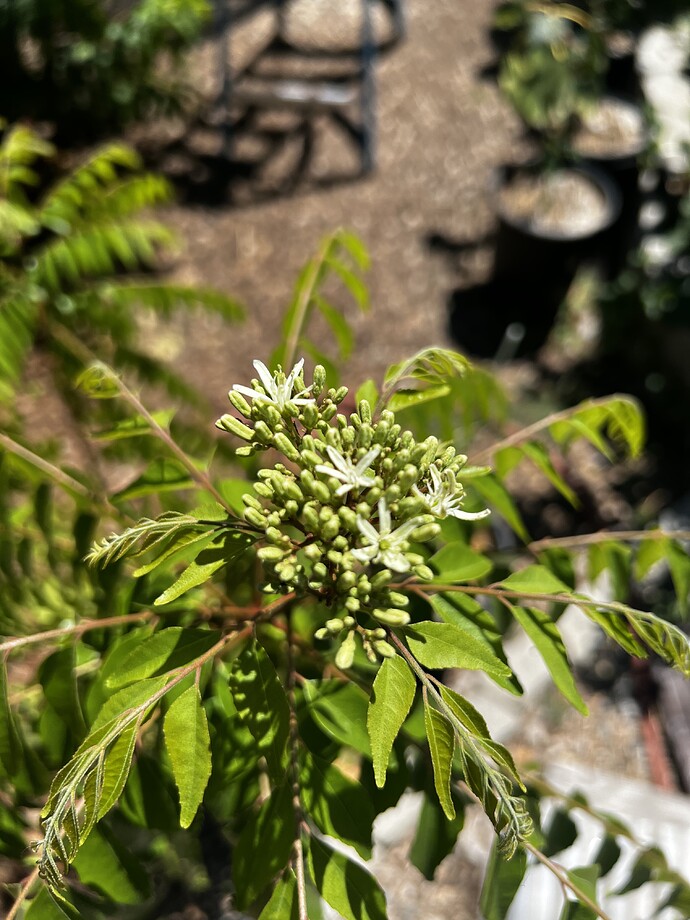 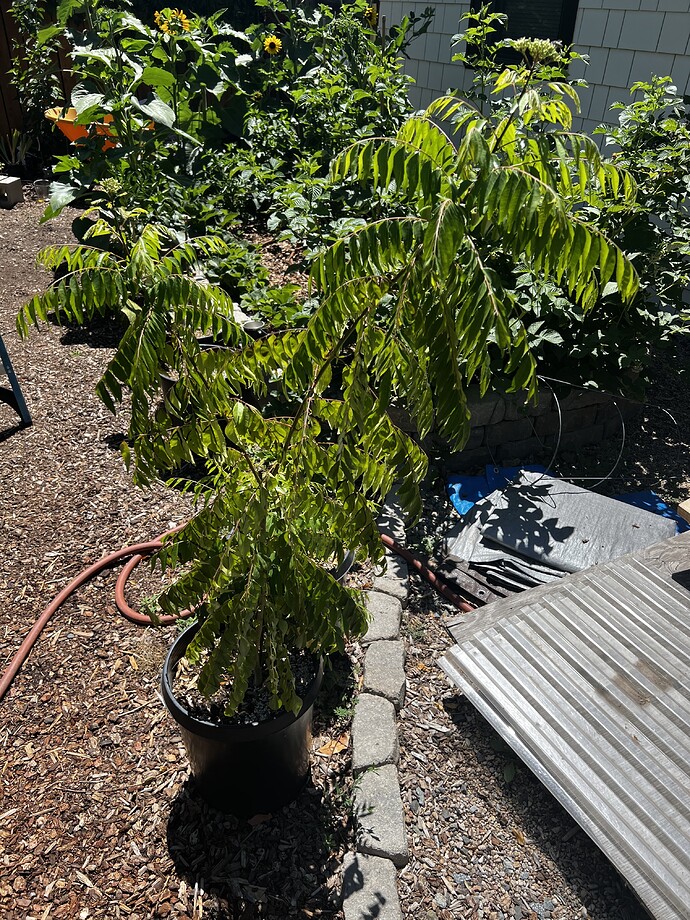 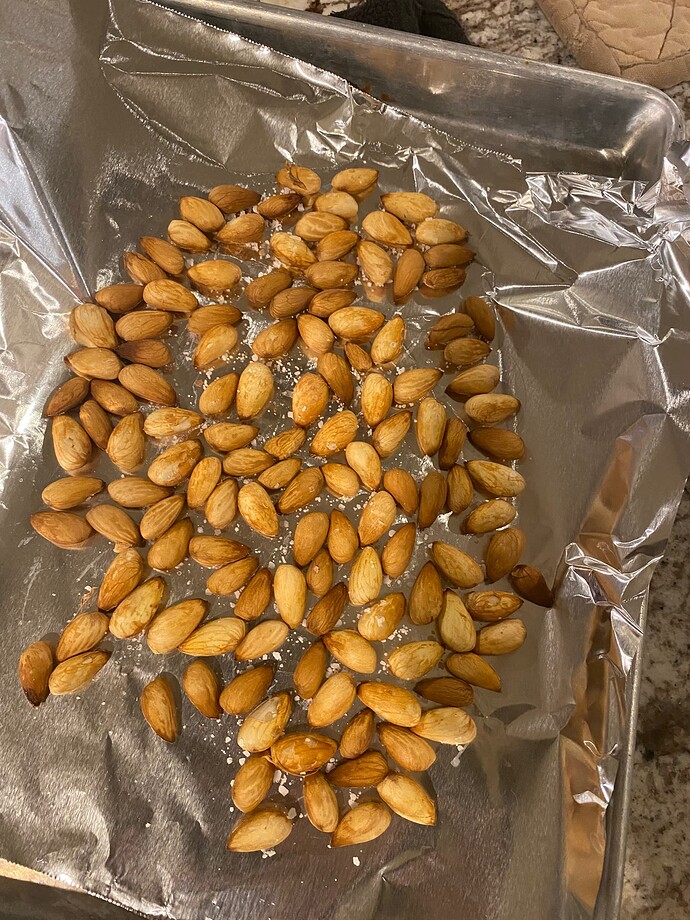 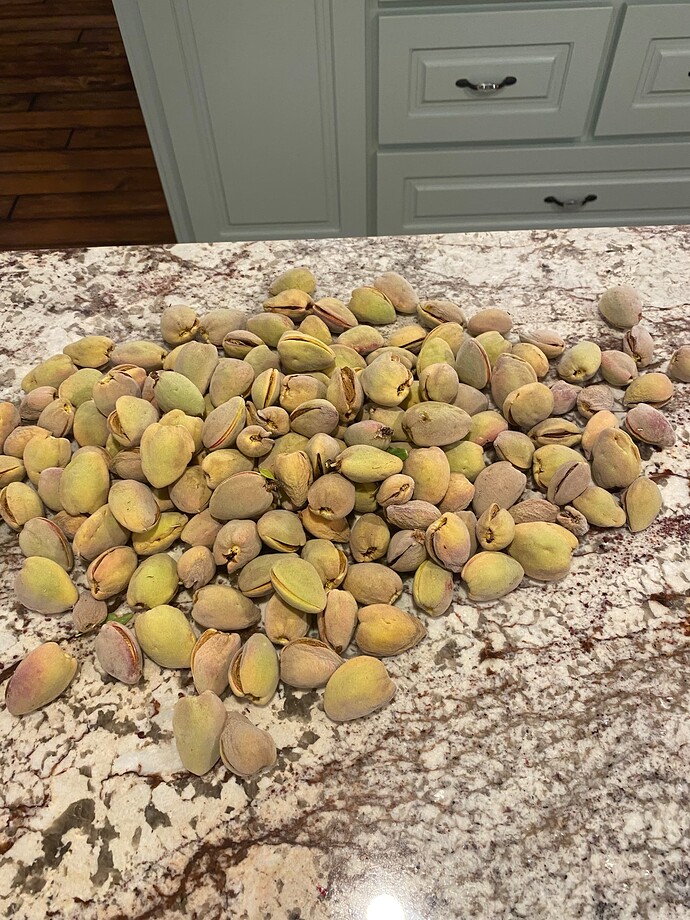 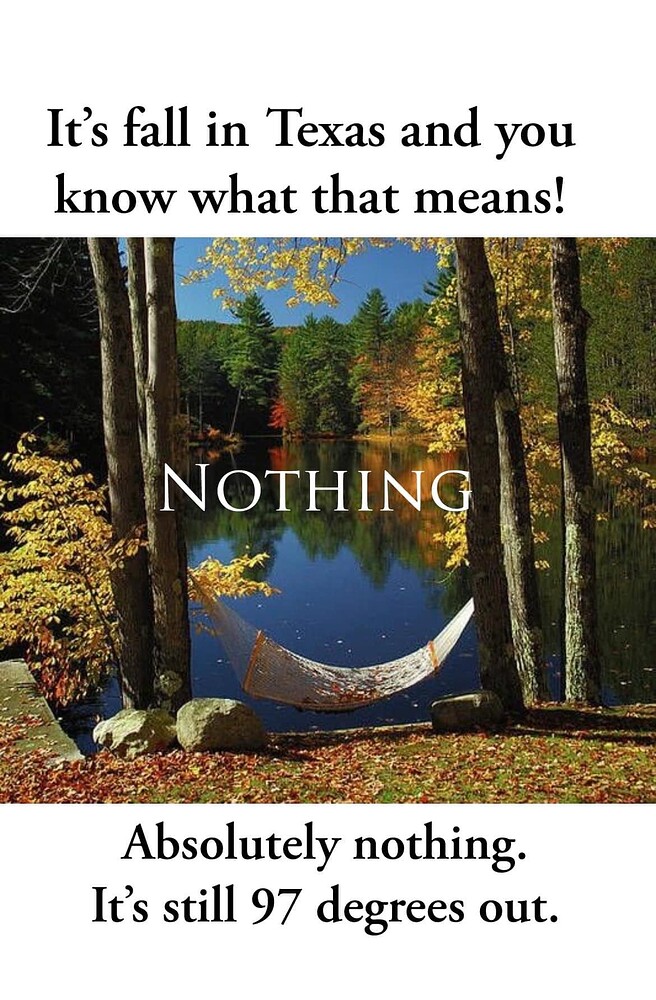 Rio Oso Gem peach. Large and very delicious. Tree in on citation and I find citation does make the best fruit. 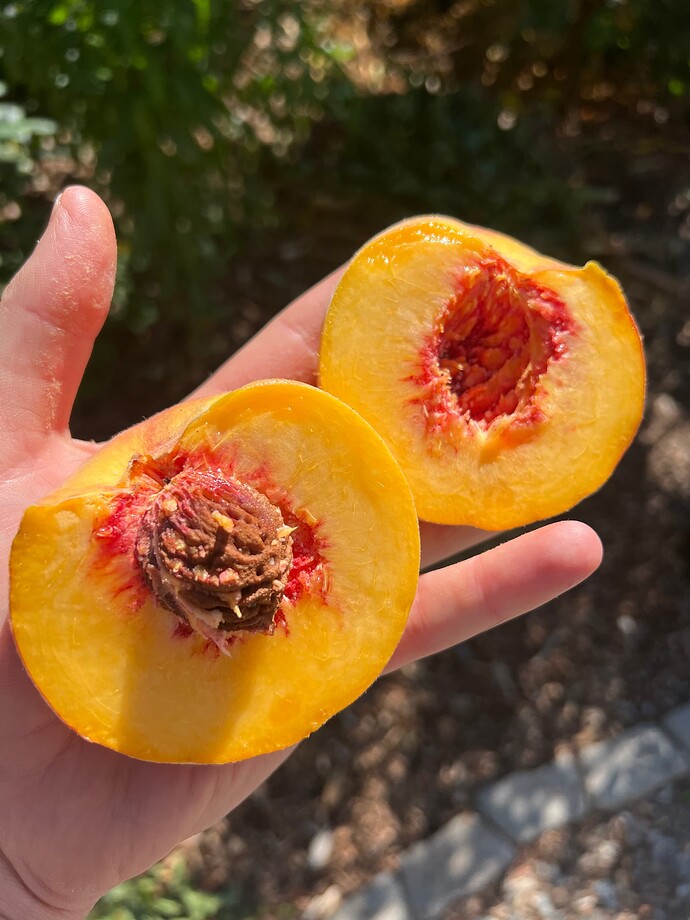 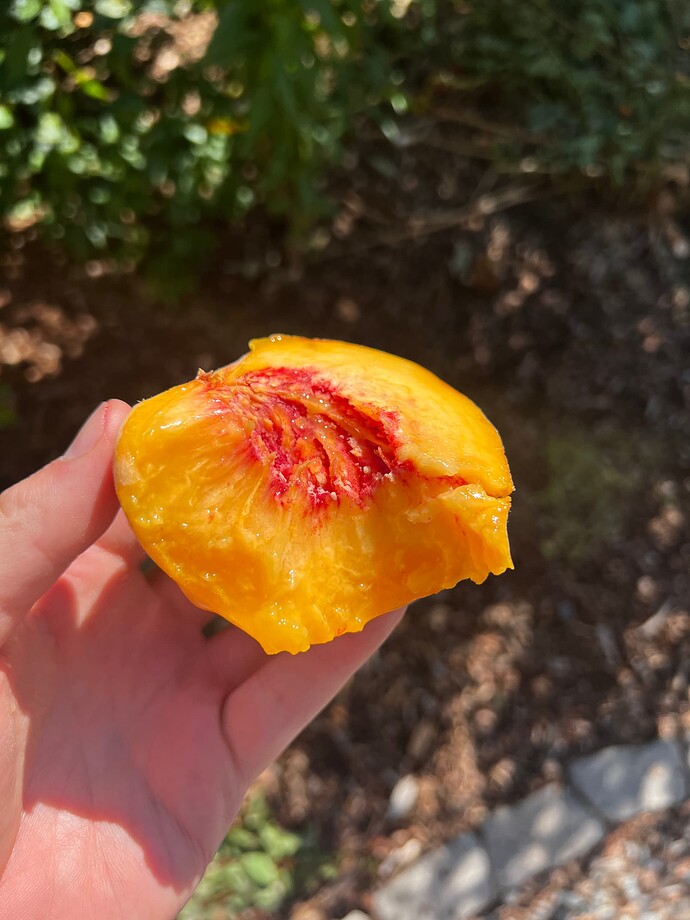 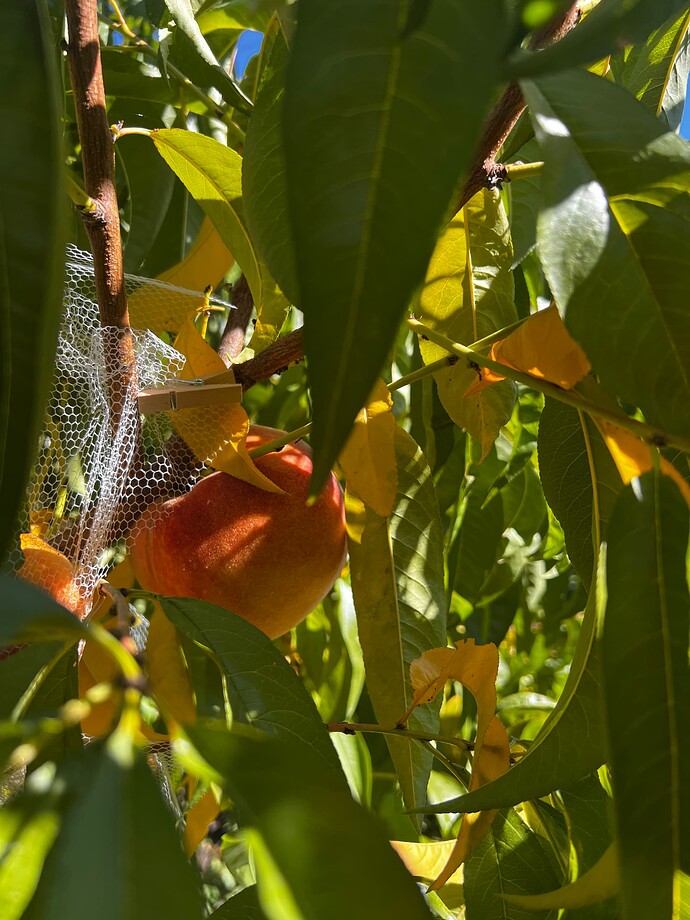