The amount of flowers on those shrubs are insane! What’s your fertilization schedule and what are you using?

Agrotextiles are very important. Maintains a suitable climate at the roots. If I give mulch, I will also cover it with agrotextiles. If I didn’t give it, every mulch will grow into a weed over time. During the subsequent uprooting during the vegetation, the roots are disturbed, to which they are very sensitive, especially in dry soil.

When I give some organic fertilizer, in the fall. The agrotextile is attached with staples and is fastened in the middle with a stapler. It handles well when I want to change a plant, so I simply unzip it at that point and staple it again. Alternatively, I will summarize the agrotextiles and add fertilizer. Fasten again and snap goes fast. I fertilize with organic fertilizer, only occasionally, in a few years, because when planting I give them quite a lot of compost as a supply of nutrients and I no longer interfere with the soil. Therefore, soil preparation before planting is very important.

When I put minerals, then in the snow January - February. As the snow melts, the fertilizer gradually dissolves and passes through the agrotextile. Also, when I pour ashes on the snow. During vegetation, I no longer fertilize.

super healthy bushes, post pictures when fruit ripens. not sure I’ve ever seen that many flowers on bushes before…

i have a constant supply of arborist woodchips dropped off here every spring. i fertilize with fish emulsion in early spring then add some composted chicken manure topped with 3in. of green woodchips. no weeds can grow in the woodchips. by fall, most of the woodchips have broken down. by spring there is only a few centimeters left. i agree though. ive never seen that many blooms on a honeyberry before so you are doing something right. you must have some super fertile soil there.

They have an incredible amount of flowers, it looks like you’ve really put in great work. What age would those bushes be, on average?

I have very heavy deep clay soil. Holds moisture well. But when planting, I have to dig the soil properly and add a lot of compost to each plant, because I don’t interfere with the soil after that. By no means do I dig.

I do not add peat, but only quality own compost. Too much peat will greatly lighten the soil, which becomes prone to drought. Peat has few nutrients and finds it difficult to absorb water when dry. With very light soil, it is very difficult to absorb soil moisture. Sandy soil is also not suitable for these plants.

Naturally quite a shallow spice and therefore they need to be provoked by nutrients to make the roots a little deeper and therefore I give them a lot of compost at the bottom of the pit and around the plant.

If this is not done, mulching with organic material initially helps, but later the plants begin to form roots at the top just below the mulch and are then more sensitive to drying, which stops growth. Subsequently, over time, each mulch begins to overgrow the weeds we are trying to pull out, making the situation worse. Someone puts a lot of mulch under the plant and a haystack effect can be created when the water pours out of the root of the bush and it is difficult to judge whether the soil at the roots is sufficiently moist.

It is often difficult to guard damp substrate under bushes. Naturally, they form thickets themselves, thus protecting their roots from drying out. If we want to have spacing between plants, we must protect their roots from the sun and thus dry out.

I have been growing these plants for more than 22 years and I have found that it is best to guard the coolness and moisture of the substrate at the roots with agrotextiles. I often mulch with organic material, but at the same time I cover it with agrotextiles.

The principle is similar to a greenhouse. Light passes easily through the glass, but the heat has a problem escaping.
Similarly, water passes easily through the agrotextile, but water vapor has trouble escaping. It is wetter there and after watering, this climate stays at the roots for longer, which they like very much. I even cover with a second layer of fabric to make the effect even greater.

They need to have the root system cool and moist with enough compost and thus gradually releasing nutrients. And of course enough sun - head in the sun and feet in the shade.

They do not like windy places and do not tolerate very dry winds for a long time. They need to be protected from strong winds.

Shrubs have different ages. During the time I have been growing these plants, I have gradually restored the plantings as new and new varieties have emerged. The first varieties before the year 2000 were with small fruits and in the background with a weak bitterness, but with a concentrated taste and aroma of wild strawberries.

I destroyed many old varieties of shrubs and replaced them with other proven varieties. Some shrubs are already 10-15 years old and are going to rejuvenate. I also make new plantings.

I try to shape some into a tree shape.

I had to burn a lot of shrubs because of the pest.

I have a pest here Oberea pupillata - a beetle whose larvae bite through the wood to the trunk and can destroy the whole plant. the rising gate to the hard coarser wood are the regenerating green twigs that grow from the bottom of the bush. He makes a cut in the armpit in the green twig and lays the eggs. The larvae first feed on the lychee and form irregular scars, and through the green and semi-woody shoots they reach the center of the hardwood and gnaw up and down.
I managed to limit it by shaping the bushes and thus prevent the regenerating shoots from growing from the bottom of the bush, but at the top. This will prevent the larva from reaching the coarser trunk of the shrub and will not destroy the shrub.

i too have heavy clay. i hear you about woodchips. makes sense. i never amended my soil when i planted mine unfortunately so i rely on the compost/ fertilizer and broken down woodchips to feed them from the surface. also my bushes are scattered about in my food forest style planting so it would be difficult to use landscape fabric like you do in your plantings. we get ample rain so im not worried about moisture for them. the last 2 summers we have had severe drought and my plants grew just fine. i just added extra woodchips to hold in more moisture. i dont know if you saw my other post but i put 13 aurora cuttings in a 4’ x 12’ raised bed last fall. all rooted. i will use fabric on that row just like you did. you are definitely the king of honeyberries!.

Steve, you’re going to have to share your tricks
for honeyberry propagation…I’m having poor luck.

no trick. just lucky i guess. if i hadn’t ran over my aurora i would have never thought to stick the cuttings in the ground. thederek was the one that had the idea and i remembered his results so i just copied him. love this site!

I tried Aurora cuttings in ground in early spring with zero success. I tried in water indoors in early winter. They got 1/8 inch roots that died when I potted them. Chopping large bushes into two or three pieces when transplanting has worked. Maybe one could remove pieces from edges of bushes to multiply a few. Stooling (piling dirt on the bush) has also been suggested. I don’t particularly need more bushes, but did break down and order a nice-looking Strawberry Sensation, which arrived two days ago, from Stark Bros.

I have a pest here Oberea pupillata - a beetle whose larvae bite through the wood to the trunk and can destroy the whole plant.

I didn’t know that there was a pest that attacked honeyberries! In the US they are normally marketed as pest / disease free. Looks like that beetle is only in Europe. Any way to prevent it?

Berry Blue is the trademark name for Czech 17. Large is not a good descriptor. It is upright and bushy.

I’ve seen Berry Blue where you couldn’t fit your hand around the main stem, and the bush was taller than the gutters on the roof of a house. It was at least 10 feet tall.

yeah, early spring it doesnt work for honeyberry. but i think its the long dormancy before it leaves out that allows the cuttings ato put down roots over winter. i have a few nursery beds that im going to try rooting mulberry, blueberry, serviceberry, goumi and autumn olive cuttings over next winter.

Nope, I tried Aurora…no takes this spring from cuttings.

I do apparently have some cornus controversa rooting successfully. (A large dogwood tree).

Got some nice plants from HoneyberryUSA…and one runty plug of Tana…dead except one viable bud just above the soil plug. (So much for it being 4" to 12". But some plants bigger than promised.)

Among the goods is one Czech 17, I’ve not tried it before. By the time it breaks dormancy and blooms, my Boreal Blizzard probably is finished…but it bloomed for 3 or more weeks.

I tried Aurora…no takes this spring from cuttings.

I got 1 out of 5 cuttings to root… but i think i did it wrong. I had them in a cold basement all winter long and they bloomed out around February somehow. I think they thought it was spring at 45 degrees?

i think you have to keep them around freezing. they are so cold hardy i think they put down roots all winter. it doesnt take much above 40 to take them out of dormancy and thats why they die if the roots arent there to nourish the cutting when it leafs out. mine were dormant and buried from oct. to apr 20. now im anxious to try rooting other things.

That sounds similar to what I’ve been told by HUSA and Berry’s Unlimited - Berry Blue was a vigorous upright cultivar. It quickly grows tall. Most of the others grow slower and maybe more squat.

What other cultivars do you grow? Are any of them similarly vigorous and upright like Czech 17? I heard Cinderella grows really slow.

indigo treat/ gem are 3ft. squat bushes which are a pain to harvest. they were slow to grow also. didnt see a berry till 3rd leaf . now even at 5th leaf they werent all that productive. will keep them to pollinate my auroras and honey bee. so far aurora is the most upright and quickest to grow. got some berries on them the year after planting. got boreal beauty, beast and blizzard . beauty and beast were put in 2 years ago each had a few fruit. blizzrd was put in last spring. we’ll see if they fruit this summer. all are too small to really evaluate but beauty and beast seem to be on par with aurora in 1st years growth so far.

I haven’t had any issues taking hard wood cuttings in mid-late winter. They seem to do just as well as currents or willow for me when I stick them in my outside prop bed. I am planning on trying to branch out and try some type of bulk propagation this year, but I haven’t decided on what I’ll try.

This was one of my cuttings from winter 2019/2020. I kept it two years growing in a shaded prop bed and transplanted it last fall.

Edited to say: This is Aurora. 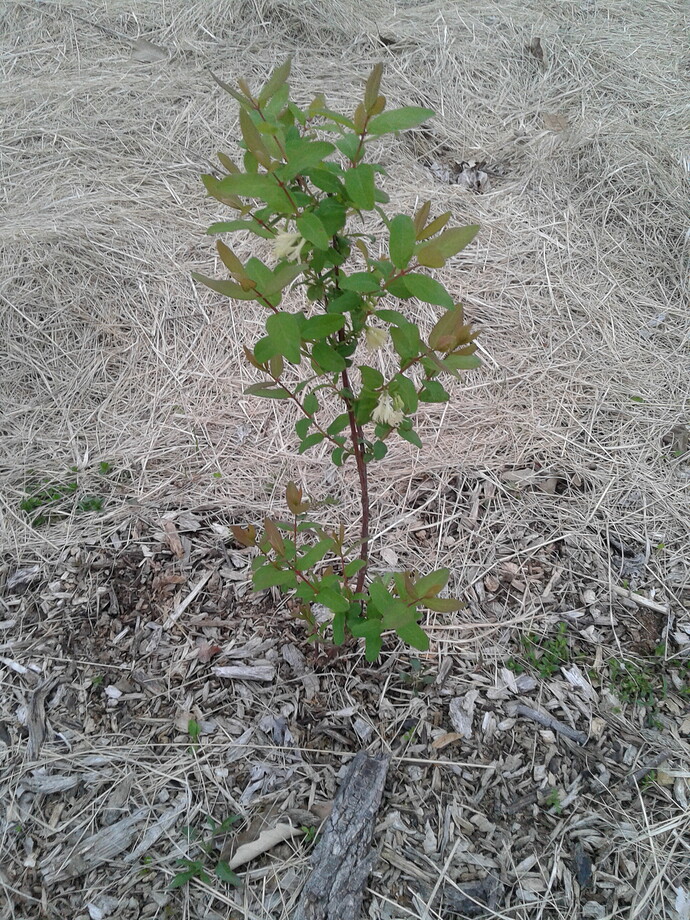