When plants are too big of a problem

The hardest thing in the world to admit is when plants are to much trouble. Through the years I cut my ties with hardy kiwi, blueberries, and honey berries. What have you got rid of? Apricots are easy to grow here but never fruit so they are getting regrafted at some point to a later type.

I keep adding things, almost anything works here. I never tried Kiwi yet. I have grown blueberries and honeyberries for awhile now. This year I added paw paws, mulberries (I used to only forage) and Pomegranate. I can’t think of anything I gave up? It’s hard to grow watermelon here, but I have not given up, just taking a break. I need to use plastic to heat the ground more. Reluctant to do so, but probably will!

Bay trees, like for bay leaves. I’ve tried twice and killed them. I even got them through the winter, but they don’t like how I water them or the soil I used or something. They just fade away.

I’m lying though: I swear I want to try it one more time, lol! I love bay leaves, and they are pricey bought as the spice.

I wanted to add, that what I noticed is me, I’m having a harder time maintaining things, I’m getting older and have slowed down, so I suspect I will have to give up some things. I agree you should not beat your head against the wall, if it’s not really working move on. I have some tropical fruit I may give up on. As with you, it’s not working well. One is Sherbet berry and maybe black peppercorn. Still trying for now. Oh also Southern Highbush blueberries, it’s too cold here for them. But I have not given up yet. Nobody told Indigocrisp it’s not supposed to grow here, as it is thriving here. Sweetcrisp is hanging on for dear life, and a 4th year with no fruit. Trying something else next winter. It is growing again for now. It’s the winters that is the problem.

I love bay leaves, and they are pricey bought as the spice.

Yes, I found them cheaper at Sam’s Club, a big jar of them with about 100 leaves. I can’t remember the price? But I immediately bought them.

It’s hard to believe but one part of my property will not grow grapes and the other part will. The soil is very poor in the part they like which was difficult for me to accept and yet it is. I made 5 years of mistakes killing the grapes every year putting them in my rich soil. Finally I was reading some ancient book that said poor quality hillside property was best and could barely believe my eyes. I had asked the old timers and everyone I knew for ideas. Once I put those grapes in some really terrible clay soil they produced like crazy in a few years.

I decided to give up on strawberry. They make runners and take over the yard. Plus birds eat all the birds before I get to them. Not enough berries off of one plant to keep just a few. Can’t bother covering up a large area to get enough berries.
The other thing i gave up on is mint. I finally moved one plant into a pot and decided to pull and trash everything else in the garden, before they take over.

Red Currants, I have tried them twice and they are always loaded with red currant blister. I cannot seem to control the aphids that cause this. So this spring I’ll hook the truck up and pull them out just like the last time.

Maybe you could try Autumn Olive or Goumi? Similar to currants. i want to try them at some point.

Im close to giving up on blueberries… Pulled them out of in ground containers this year and going to try above ground grow bags. Instead of just dumping some sulferic acid in each 5 gallon bucket of water, Im mixing up a 35gallon garbage can at a time. Gonna try to keep the solution PH around 5 and see if that helps.

Lychee. I keep trying to grow them in a container and keep killing them. It’s a fool’s errand but I just like them a whole bunch.

i gave up on is mint

Me too. I managed to pull it all out of the ground. Now if only I could do the same with creeping charlie.

I got rid on my Wonderful pomegranate and Russian pomegranate planted in the ground, they bud out to early and the March freeze get them and kills them down to a 1’ plant.

Got ride of my of my Anna and Meader kiwi (both died), but my Vincent and Tomuri kiwi are still good after 2 years but still no fruit.

I am getting rid off several ornamental bushes and perennials, they started to shade my fruit trees. I gave up on strawberries, they do not produce much and keep dying during the summer. Melons are killed by bacterial wilt just before they get ripe, I cannot kill all cucumber beetles that spread it. I may pull Chester blackberries. They actually very productive, but they taste terrible.

Gave up on blueberries (hard to keep soil ph down), one sweet cherry (cracking issue) and one sour cherry (non productive), one Asian pear (not tasty)

One of these days, I may give up on peaches (too many diseases and insect issues to be bothered with and my unwillingness to spray too many chemicals).

They actually very productive, but they taste terrible.

Mine really attract yellowjackets. I found if I let them hang a long time they are OK, not great. The calyx needs to be brown and crispy before harvesting. It is one that is last on my list. It’s really late, so extends the harvest for me. Easy to manage, so I’ll probably keep it.
I have been trying many cultivars and have found a number of favorites, but none are perfect.

This year i ripped out a euro elderberry…it died back over winter…and last year it was infested with SWD…as in every berry was as squirming mess of maggot type worms.

I’ve repotted my hardy kiwis but i may be done with those too down the road (spring frost/they grow insanely fast and seem invasive).

Rabbits, Plum Curculio, squirrels, spring frosts, too much rain have all made me question why i even grow a lot of this stuff…but i do…for now!

If you have an Indian grocer nearby, bay leaves can generally be obtained dirt cheap in big bags. In fact, just about any spice is cheapest at Indian grocers.

Totally agree. We have two mega Indian grocery stores in our towns.

I’m giving up on Mericrest Nectarine. Here’s a picture of it on the right, next to my Blushingstar 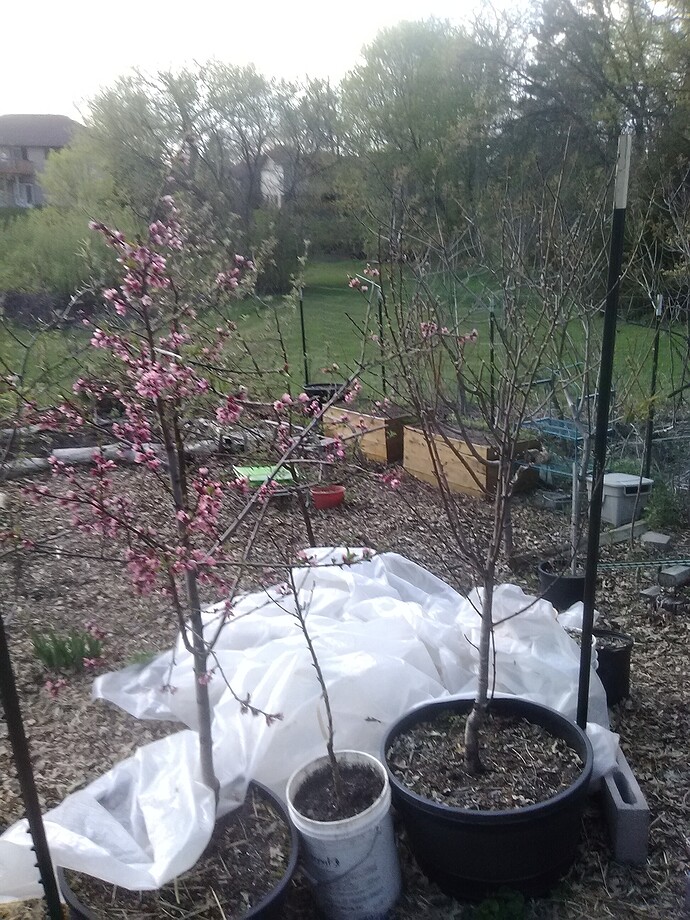 Apricots. So what did I do today?..I planted a Westcot. On a related note…I wouldn’t be able to grow much of anything without tons of underground drainage that we have installed over the last 6 years.

Gave up on sweet corn. The squirrels won