Why You Need A Heartnut Tree

Wild nuts mostly reside on the east coast. Butternut are quick croppers, but from what I’ve seen they grow pretty slow. The nuts themselves are great IMO. Not sure if they are self pollinating. If not just put two in the hole.

What Robert said, a couple of posts earlier. There are quite a few ‘butternut’ varieties that have been propagated and distributed for decades that are, in fact, hybrids with heartnut/Japanese walnut, which was introduced to the USA around 1860.
I have a couple of ‘butternut’ seedlings grown from wild-collected seednuts sent by a GW forum member in north Georgia(USA) 20 year or so ago. I always thought the nuts they produced (and grew from) were more rounded than most of the other butternuts I’d seen, but thought, “Maybe that’s what Southern strains look like.” But… recent examination of lenticel morphology/patterns on the twigs indicates that they are buartnuts. So… there was a heartnut ‘in the woodpile’ so to speak.

There are quite a few ‘butternut’ varieties that have been propagated and distributed for decades that are, in fact, hybrids with heartnut

Thought about getting a couple of those a few years back. Unfortunately it looks like they were only focused on disease resistance. Some of the nuts actually looked even harder to crack. Like everything else heartnut has escaped into the wild. They easily hybridize with whites. As true whites die off, eventually only hybrids will remain.

i bet hybrid American hazels would grow well there and they produce in as little as 4 years. mulch them well and give a good drink during dry spells. besides that they are care free. they grow in bush form and send out suckers so you get more free bushes and they are very flexible so its easy to harvest them. mine are so full of nuts they are laying on the ground and on my rhubarb.

I have a lot of hazelnuts because hazelnut taste great and are a bush. I have 3 or 4 Polly O, 1 Jefferson, 1 Winkler, 1 Purple leaf American seedling, and one other kind I forget the name of.

easiest nut to grow and quickest to bear. thought of butternuts but why when hazels produce so quickly and in abundance.

@elivings1 do you get rain during summer?

Snows until mid May here typically. Then maybe some rain in June but it is more uncommon most years. July has no rain most years and is a arid place then. August is considered our hurricane season. It rains every day for at least a few minutes in August. September is no rain but more chilly with wind. We may even hit the 30s at night in September easily. October is more of the same until end of October right before Halloween. The days before Halloween typically mark our first snow which is why I have stuck to crops that ripen in October at the latest with persimmon as a exception as they can stick on the tree after a frost. All in all we get very little rain here though. Google says we get 18 inches of rain a year and 73 inches of snowfall a year. I have begun to question what google says though because we have gotten hotter here for years. Most years we don’t get much below -1 and that is a day or two a year but we are zone 5 and google says we get our first frost October 3rd but in my experience that is not the case. I forget what you called it in the persimmon thread but one time we got a arctic blast snowstorm or whatever you called it where you said it can go below zone colder temperatures and it went to -9 here. Only time it has gone below -5 here in years but remember we are zone 5 according to the USDA. The simple thing to know about Colorado is predict the unpredictable. Google says our average final frost is May 3rd but we always seem to get a freeze after mothers day and this year we got a freeze the end of May after 2 months of no freeze. The year before we got a freeze around Christmas. The year before that we got a freeze in September but there was no frost after April something. Like I said predict the unpredictable with weather here.

That’s an unexplainable climate, man. I’ve had polar vortex weather. I had never heard of it until it went to -33 here in 2018. I about freaked out. You look out the window and the air is alive and swirling and it’s bitter…

I thought to myself, “no way”! And Steve lives in that. That takes leather skin.

I believe the polar vortex was the day it went to -9 here. That was likely 3 or 4 years ago at this point. This was my second year at USPS and the vortex happened when I was in my first year out of 2 as a plumbing apprentice. I remember the first day I got a call saying not to come into work and the second day I had to come into work. I remember it so well because I was working at Nederland High School which was already a hour away from most other places and a remote mountain town I had to go up a curvy road to get up on and we started work at 6 AM. It was also the only job I was fired on due to me not even being able to concentrate because I would have to wake up at 4 to be there then work a 10 hour shift and went to school then went home to eat and it would be 9 or 10 at night. Rise and repeat the next day. Like I said not only was it a polar vortex (only one in my life I remember) but power was out 3 days and I could not concentrate but had to go to work. Ah the joys of some jobs. Weirdly we were zone 4 on the first map and when the second map we were put as zone 5b. I would be interested to see what zone I would be in if they redid the zone map. I am not sure what causes our weather to be so wonky. Our states next to us seem to be way more consistent. Kansas is zone 5 and zone 6 to but generally has a consistent last frost a month or two before us. Higher up in Sedona Arizona and flagstaff they are more like us but southern Arizona like Phoenix is way hotter than us. Thought in my lifetime I think Sedona may become the new Phoenix and we will become the new Sedona based on how it is heating up here. Like I said I really wonder if our zones are correct.

got to -40f last winter with 1 day w/ -70f windchills. broke daily records for those dates.

i wonder how all those folks that moved here from s. new england faired in that. lol!

It looked to me like utter “death”. Or, a Tim Burton film.

Have you ever tried climbing a telephone pole when the temperature is -30F with a 30 mph wind blowing and there is 1/2 inch of ice on the north side of the pole? Skin freezes in 30 seconds.

Corning Iowa in February 1978. Snow plows piled it 30 feet high on each side of the main road.

I’ve found that the “quick cropper” moniker doesn’t really fit the true butternuts here. Black walnut bears earlier, probably because it is happier in our soils (SE Wisconsin clay/loam, emphasis on the clay). I have had several butternuts grow extremely swiftly, but they are on a narrow strip of never plowed soil and I suppose because of that they have access to trace elements that have long ago washed out of the rest of the surrounding lands. As far as shape of the nut, I find butternut to be naturally variable (no need to look for a heartnut ancestor), just like Juglans nigra. Same goes for shagbark hickory. It’s all part of being a wild tree. As for the “east coast” location for wild nuts, I find that at variance with the statement I read, maybe in a Norther Nut Growers of America article, maybe in John Curtis’ “Vegetation of Wisconsin” that our state had the highest presence of butternuts in the US. We also have the distinction of possessing the most virulent strain(s) of the canker. This I do recall from a NNGA article, possibly by Dr. Sandra Anagnostakis

I have a black walnut tree that produces seedlings that thrive in red clay soil. The parent was a wild tree that grew in red clay soil southeast of Moulton Alabama. It produced an abundant crop with up to 6 nuts per cluster. It was impressive enough that I collected scionwood about 30 years ago and grafted it onto a couple of trees at my mother’s home. The parent tree is long since gone when the road was widened from 2 lane to 4 lane. It is one of the best flavored walnuts I grow. Percent kernel is about 20% which is typical of wild trees. I keep it around because it is an excellent rootstock in just about any clay-loam soil. 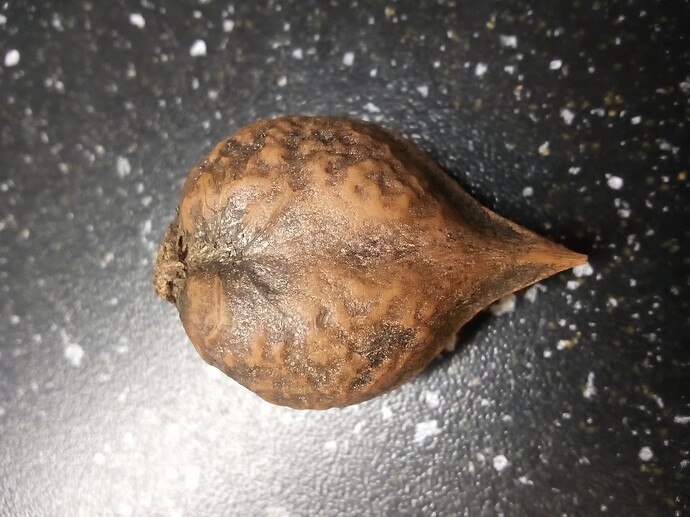 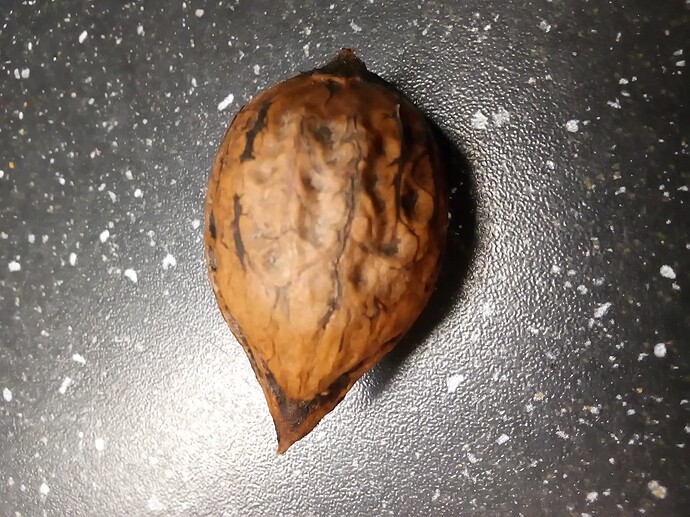 For anyone wondering what the seedlings were going to produce. One tree has the perfect heartnut and the other tree is slightly more rounded, but still heart shaped. Not new variety quality, but I’m totally satisfied.

How do they crack out

They have not dried yet, so my first attempt broke up a little. I will re-post when these are dry.

got a very good crop of hazels drying right now. cracked some and they are nicely filled. a little smaller than the ones in the store but not by much.

I’ve got a fleet of Euro hazels that still have not fruited. What did you plant and how long did it take?