Scottsmith It was bench grafted on a G-890 rootstock.

Think I’ve got my second grafting take- illinois everbearing on a “dwarf” mulberry from Baker Creek. It has been sitting there doing nothing for weeks, but lo and behold it appears alive. 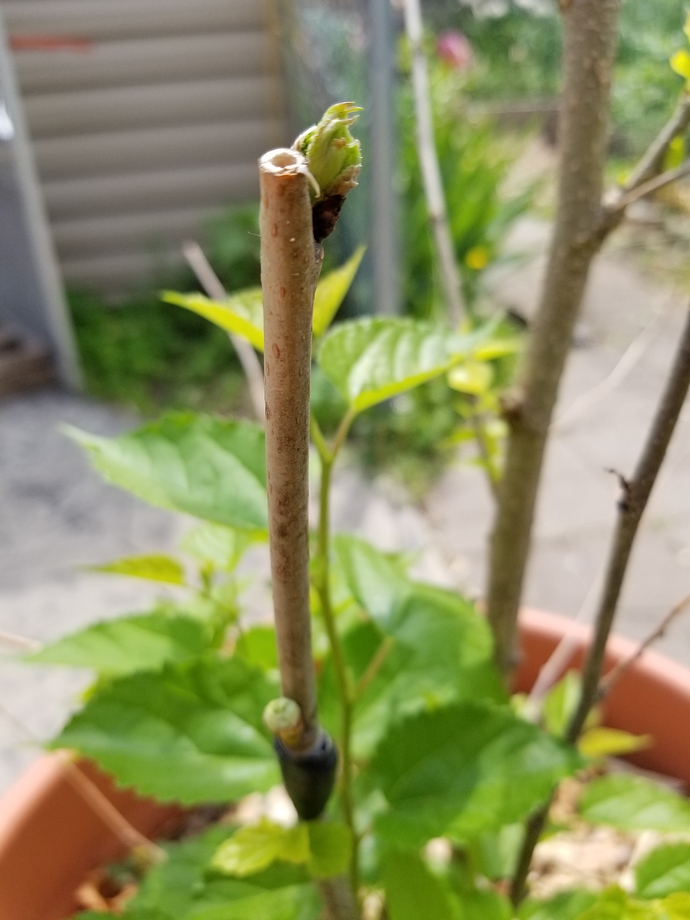 I did an inventory of my grafts this year now that all of the scion has finally either taken or died.

80% of 10 pears on OHxF333- Mostly perry pears. Two didn’t take, one of which then died to caterpillars. I had beautiful, healthy, beefy rootstock from Cal Poly. I highly recommend their stock if you can get some, but as far as I know you have to buy it on campus.

0% of 10 stonefruit on Krymsk 1 - Total failure. A couple peaches, the rest apricots and plums, all failed completely with never a sign of life. Raintree sent me some pretty wimpy rootstock, but I’m starting to wonder if it was mislabeled and not even prunus? I’ve never failed so miserably, even the first time I tried grafting when I had no clue what I was doing. Here are a couple of pictures of the stock, can anybody tell if this is Krymsk 1?: 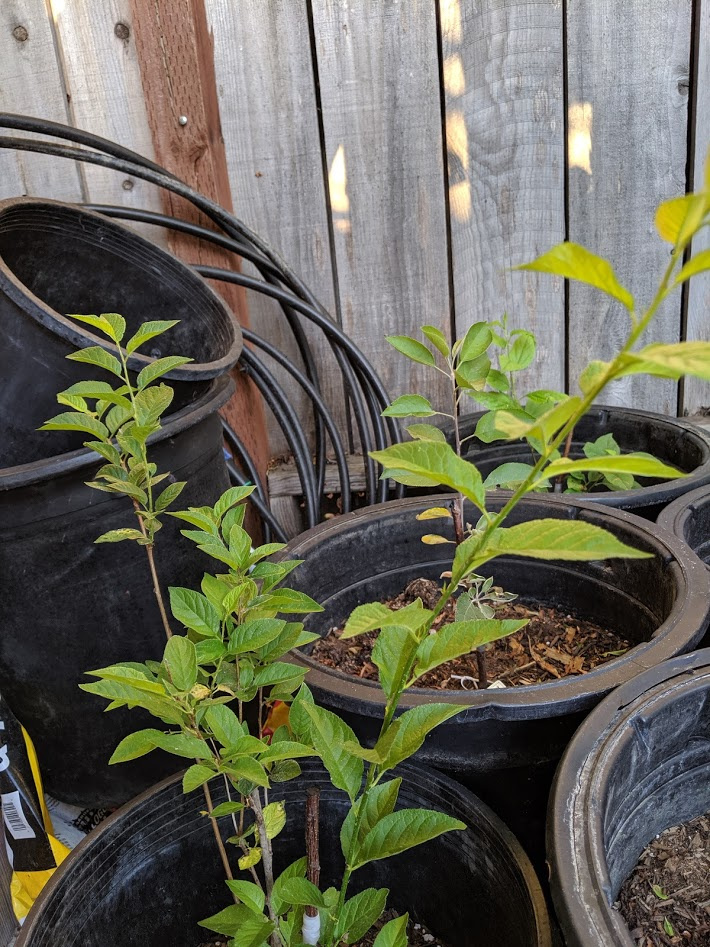 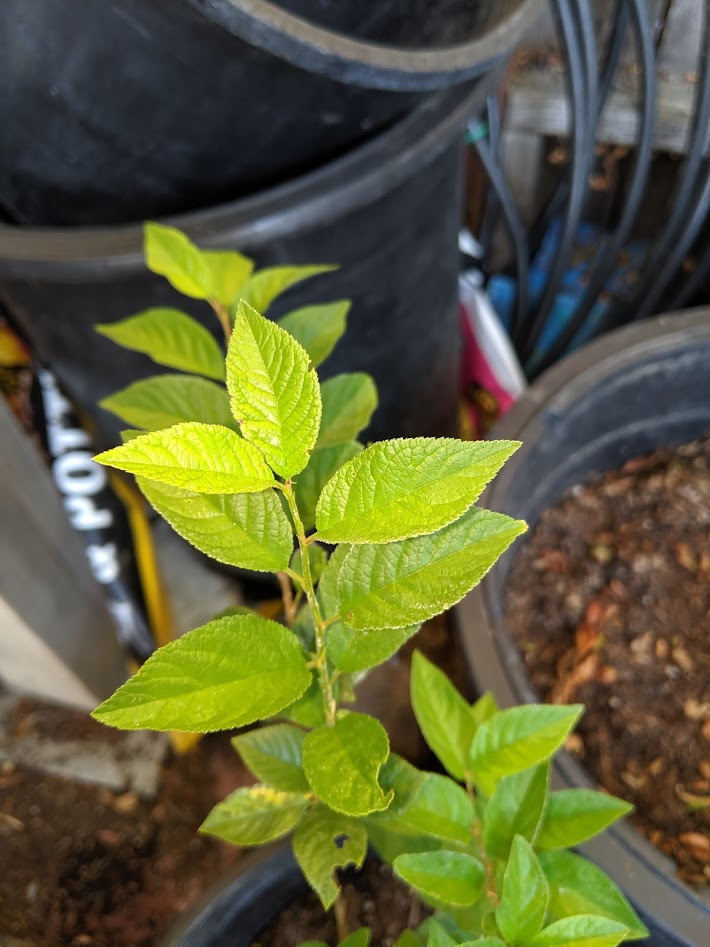 Barbra’s Blush persimmon. I had very good success with this cultivar. I probably have 15 of em. 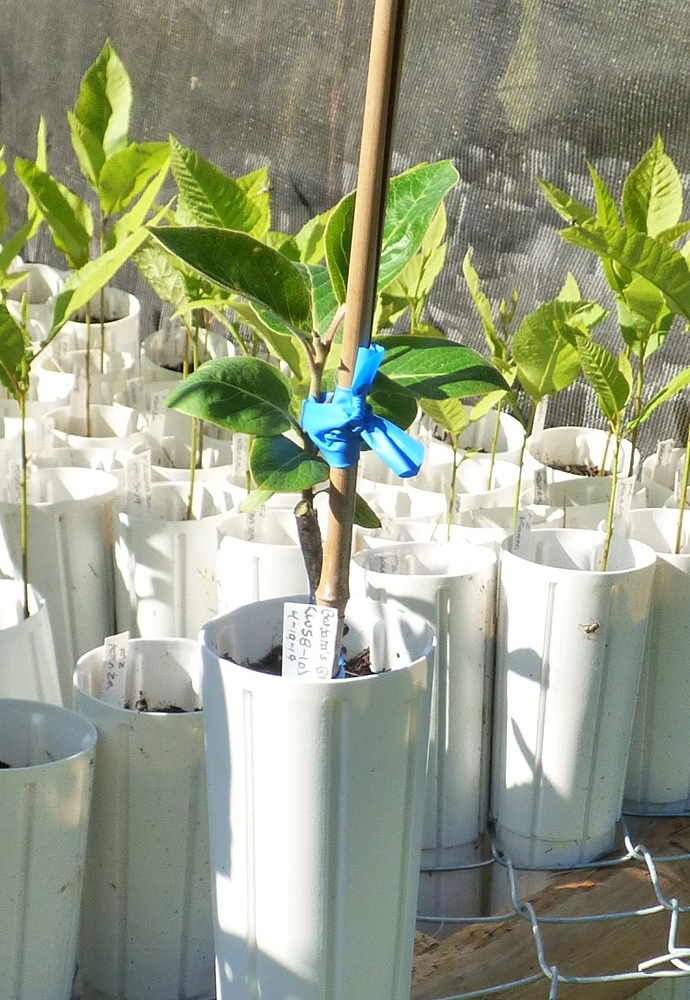 Rosseyanka x Honan Red. Needs to be zone 7. Grafted it to sell and I may get into the persimmon collecting business because I like to graft them. 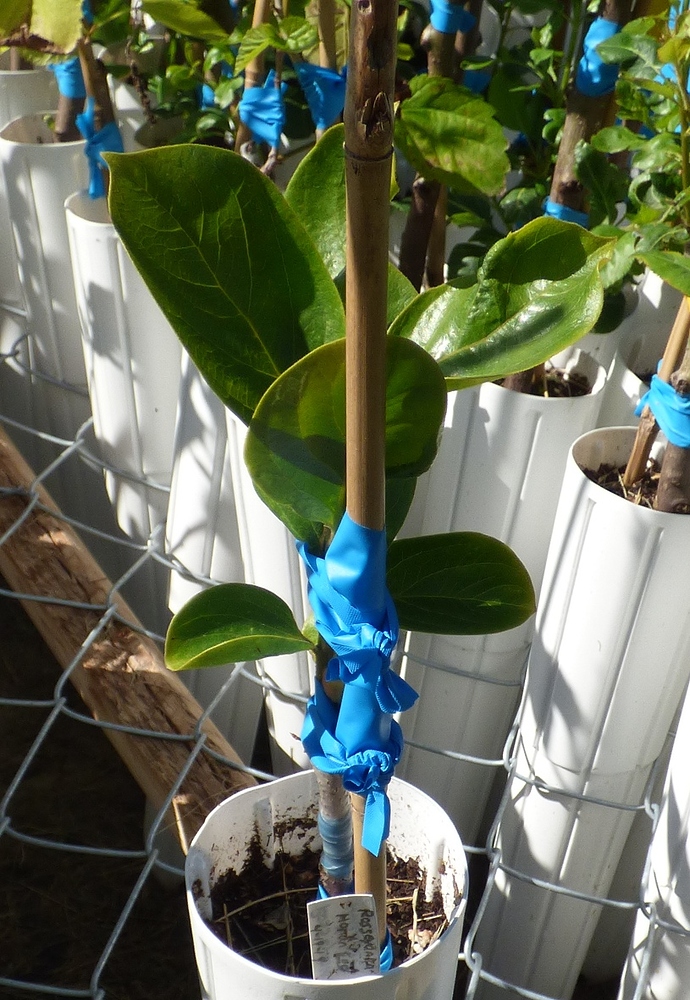 Thanks @tonyOmahaz5. Pai Li pear. Lots of the grafts I did of this the tissue surrounding the bud went dead (had to be late in showing up, winter kill, Tony.) It happened with so much of my own scionwood, also… but most of mine the entire scion died. Several of your scions also died, but I got one or two I actually think. -20 for you last winter and I think -30 for me. That shows that Asian pears are not nearly as cold-tolerant as European pears… 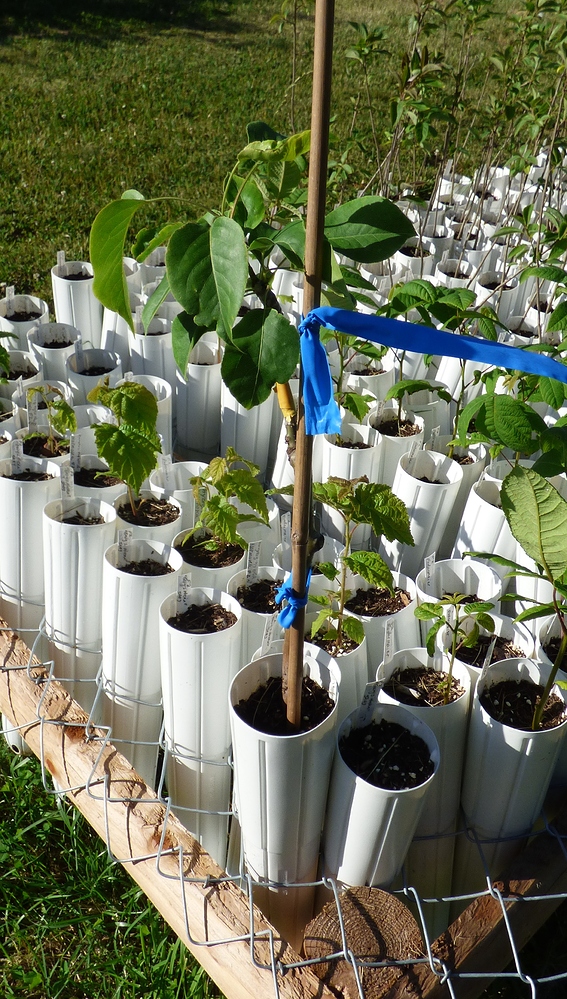 A Sheng kaki persimmon which is not going to be hardy for me in the long term. 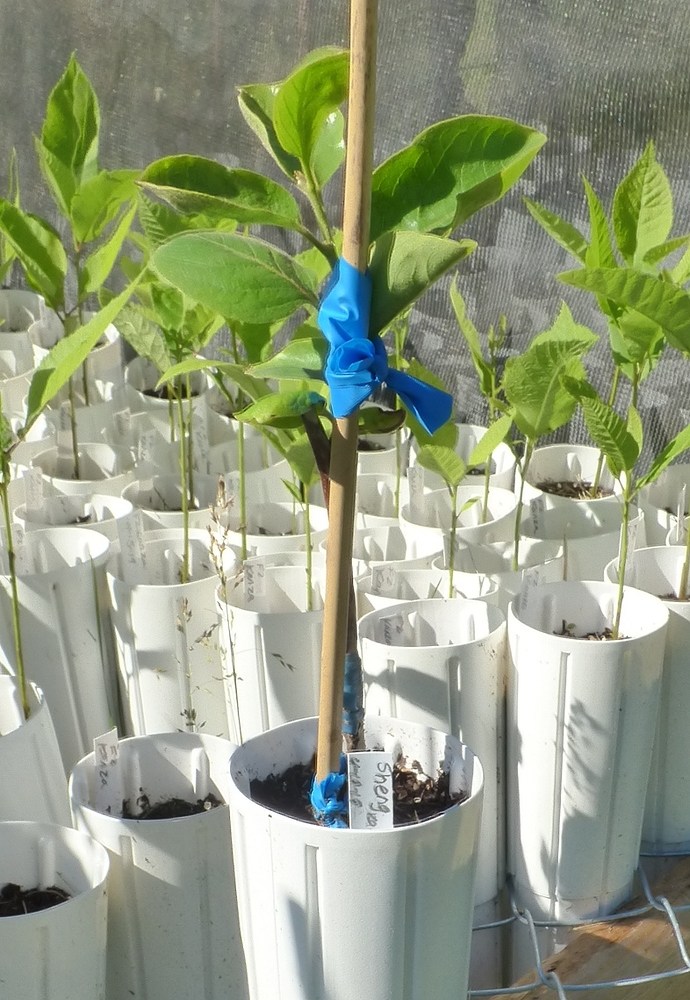 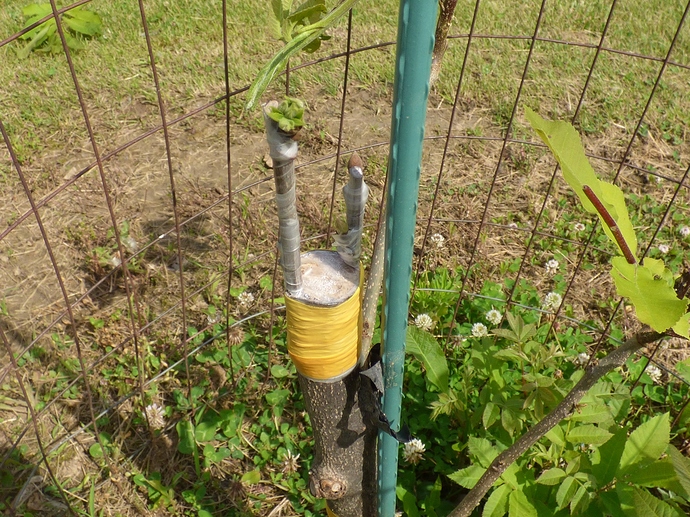 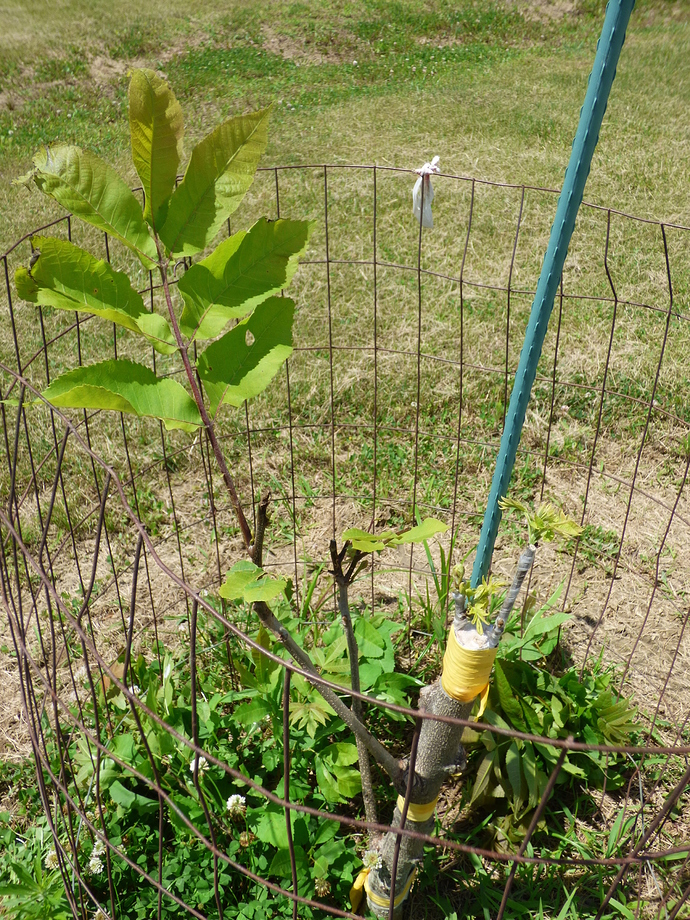 This is a heartnut that’s a seedling of Stealth that has a very nice cavity upon early examination: 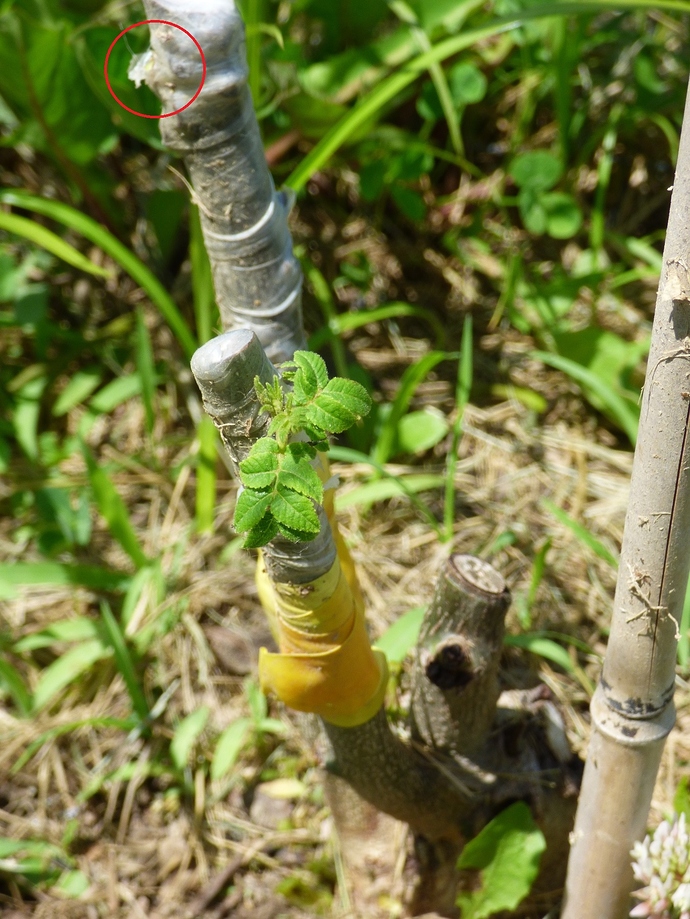 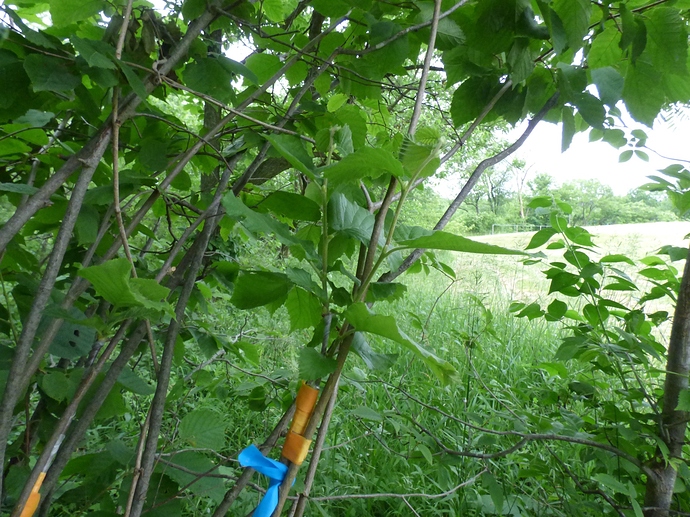 Another Normoka. Looks like a bark graft from here. 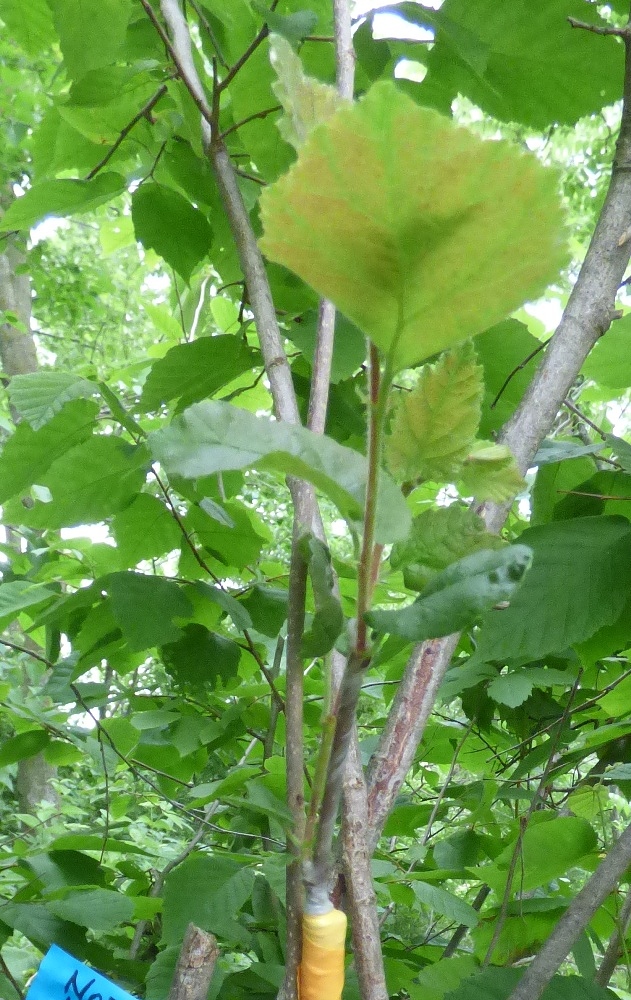 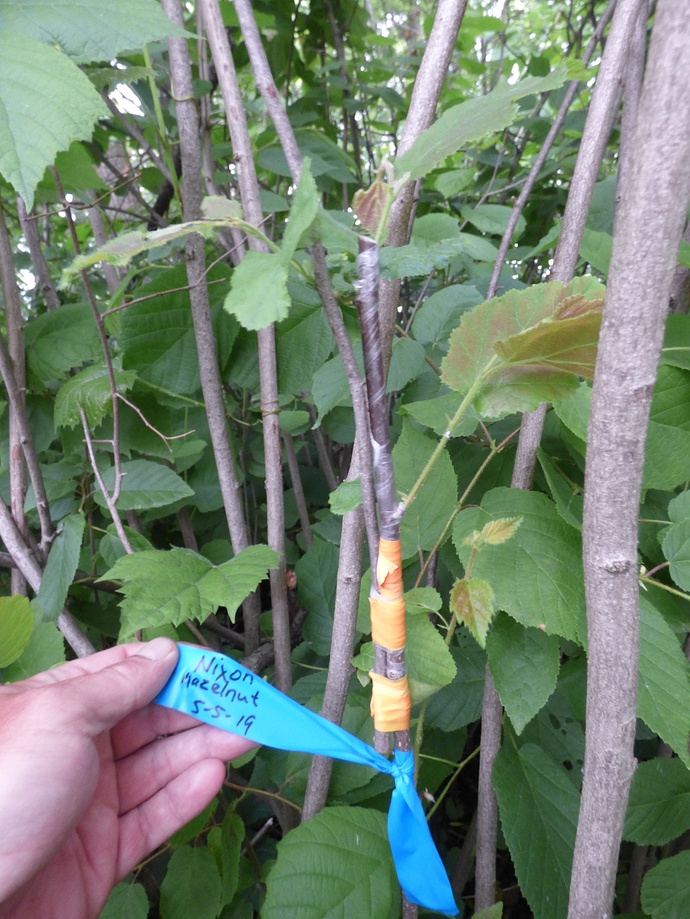 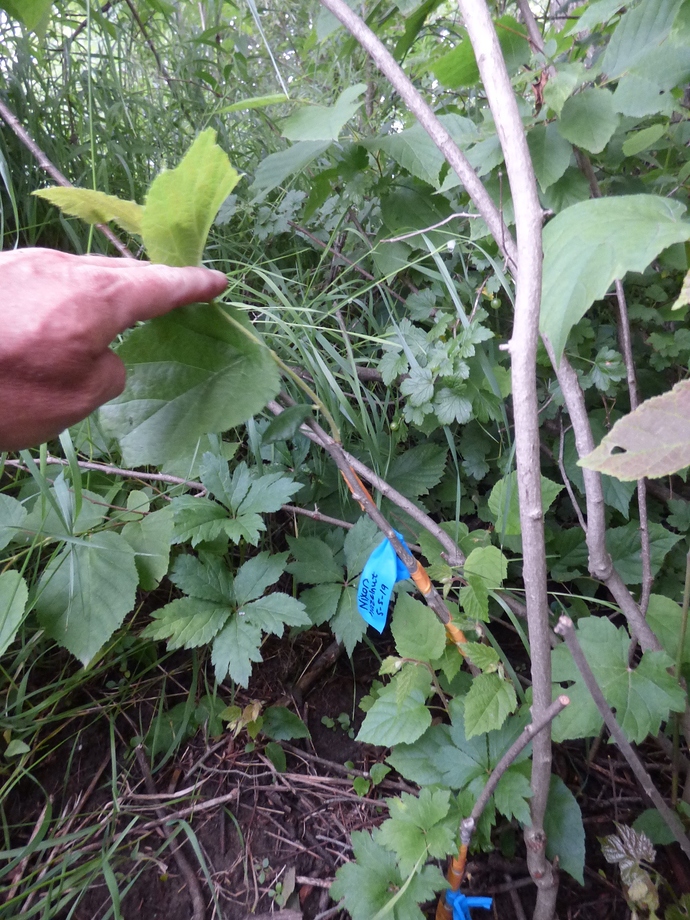 You know I appreciate that, Tony, very much.

Barbara’s Blush persimmon’s leaves almost look like that of a Kaki! You have quite the operation going with all those tree pots.

I’m in head deep and it gives me something to do. I hand weed everything and look at every graft nearly daily. Shortened story version: I’m going to have some excellent nursery stock this Fall.

I bought 600 of the white Deepots (not Treepots which is course is another type of container) and used about 550 I’m going to say. 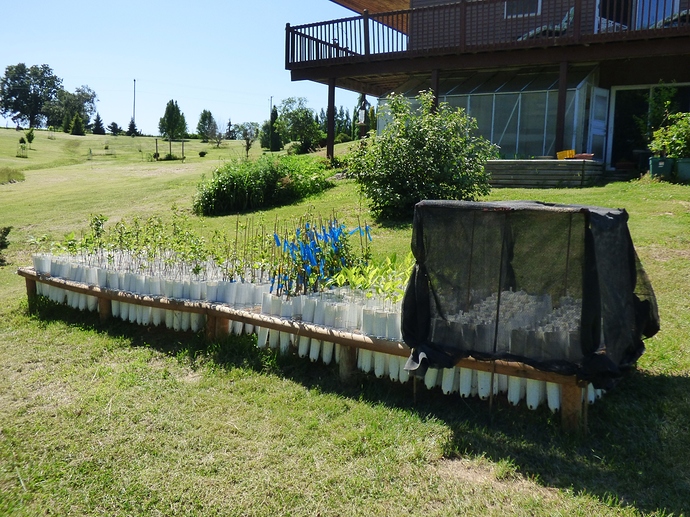 Any day now thru August my pawpaws inside this shade cloth will pop. @Lucky_P 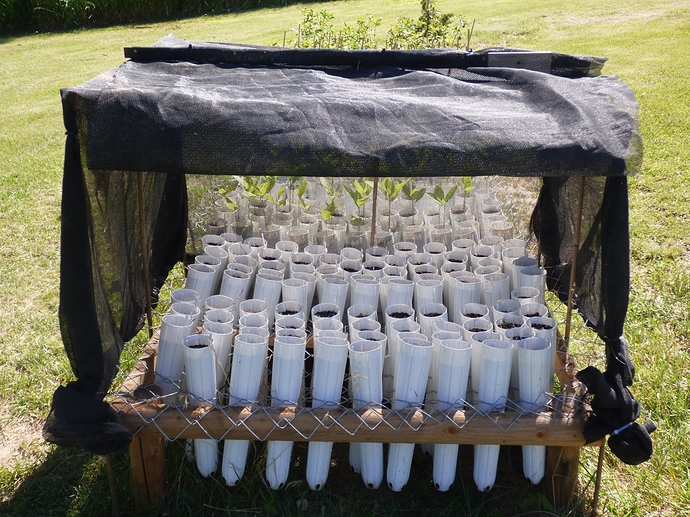 F2 Normoka seedling that we will never know what pollinated the Normoka true cultivar the seed originated from: 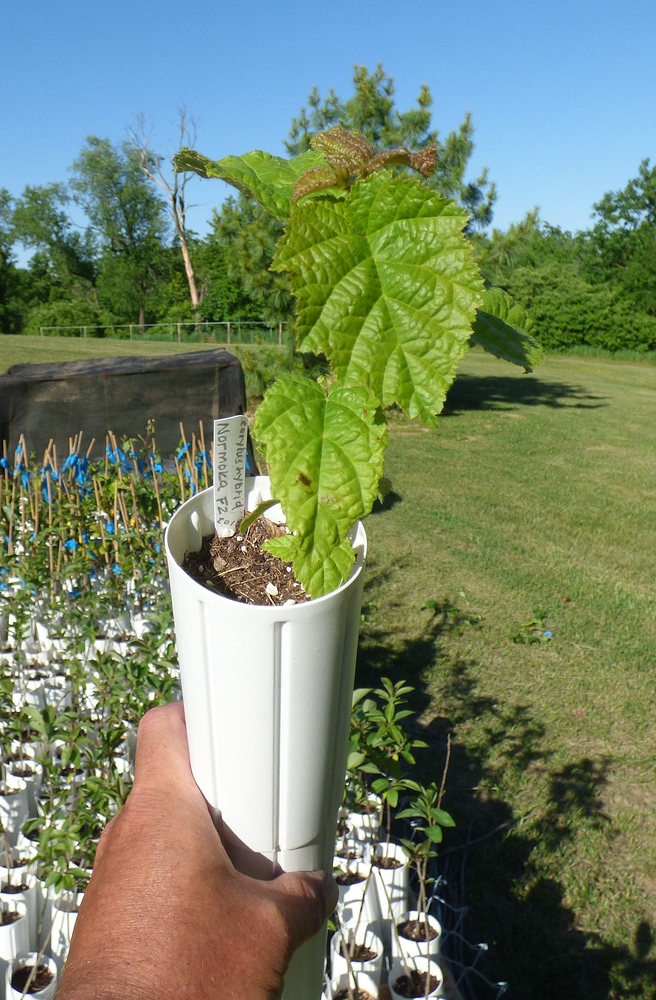 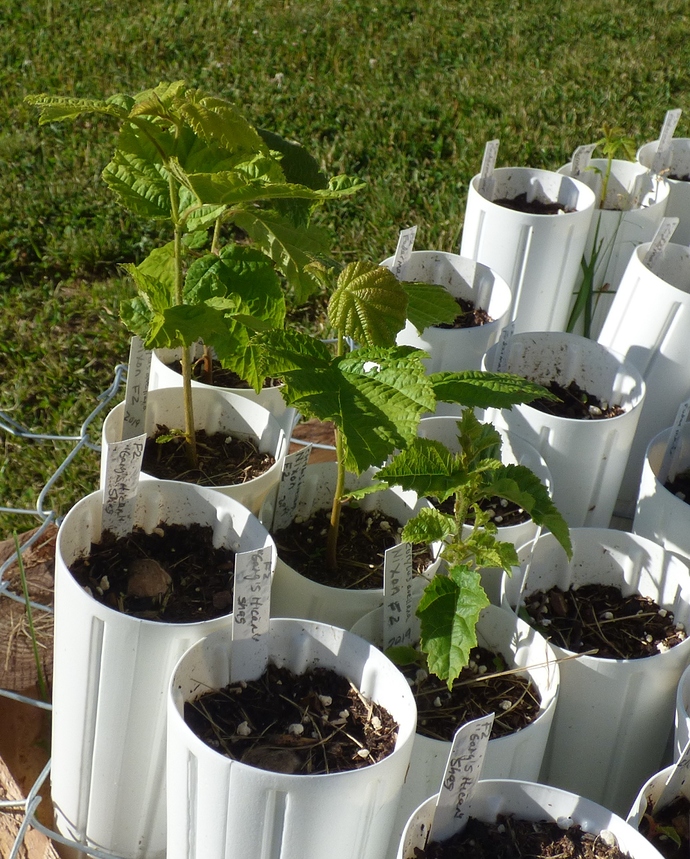 The majority of seedlings I have are persimmon I potted from bare-root this Spring that will need a couple years to beef up to become rootstocks for me. Then I grew pecans and heartnuts and a few other odds and ends to boot.

I need to make that a habit: wrapping the length of the scion, & am a bit embarrassed to realize it after grafting in sunny dry Spokane about 8 years.
Sheesh, some people’s granddads…

I realize most successes here occur with grafts near the ground, and that may be due to proximity to soil moisture. Hmm, must do better when top-working.

What do you use for a potting soil mix?

I watched a video last year before the first time I grafted, then did it like the guy showed. He didn’t wrap the entire scion, only the joint. My grafts were nearly a total failure. This year I presoaked the scions and wrapped them thoroughly in Buddy Tape, then gooped black grafting compound over that for good measure. I also switched to bark grafts and placed them closer to the center and top of the trees. Success!

Pro-mix from big-box stores. This year my Walmart sold 9$ compressed bails of organic vegetable and herb blend vs. the 13-14$ Pro-mix I usually purchase at Menard’s.

Often I use what’s handy. But preference is 40# topsoil from Meijers for $1.59 and then add a handful of vermiculite and stir it a bit.
Meijers has real topsoil, not bark sand blended together.

I did a ‘proof of life’ walk among my trees today to get the big picture on my grafting success.

I had originally planned on creating a bunch of Espalier trees, so I ordered 10 B9 rootstocks. Changed my mind and I’m just planting a row of 10 to halfway block view of our backyard from the road. I chose 10 of my most vigorous growing varieties to graft to them in order to get them to size, and fruitful, as quick as possible. 8 of ten were successful. The two that failed were scions from my own frankentree, and the source branches never leafed out this spring. Those two failures, Enterprise and Golden Russet, will be regrafted next spring. 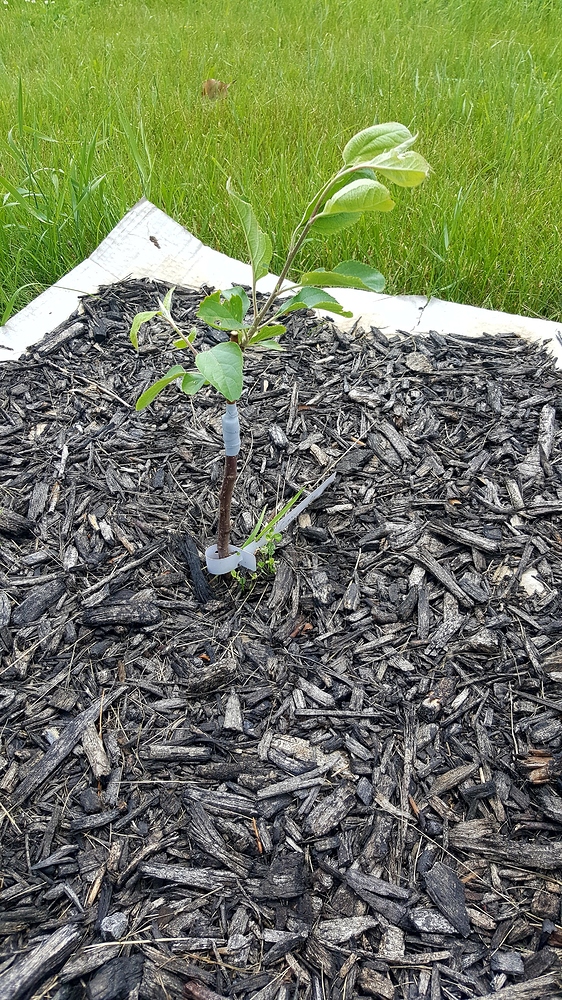 I had 6 each of M111 and B118 rootstocks that I did not graft to last year. Against advice, I chose to dig them out of the nursery and move them to their final spots, and graft to them at the same time. 10 of the 12 were successful, and have really taken off. 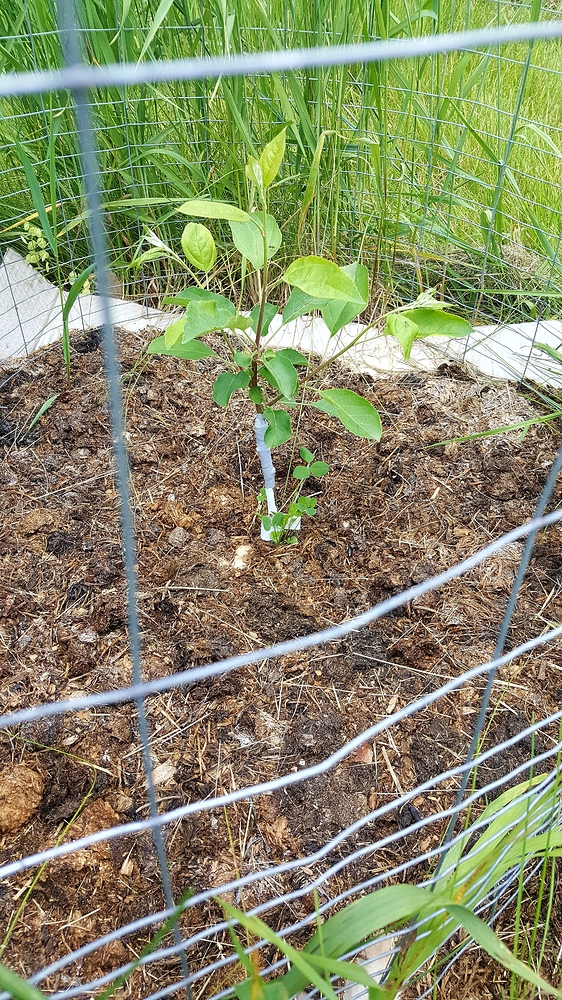 I tend to be a penny pincher, more often due to necessity than choice, so for my remaining grafts I purchased seedling apples from a county conservation sale at $1 a piece rather than designer rootstocks. As I expected they were smaller caliper than regular rootstocks, so I planted 40 of the 125 directly into the nursery for future use. The 85 I did graft were noticeably more difficult, and I ended up with 60 successful, or 70%. 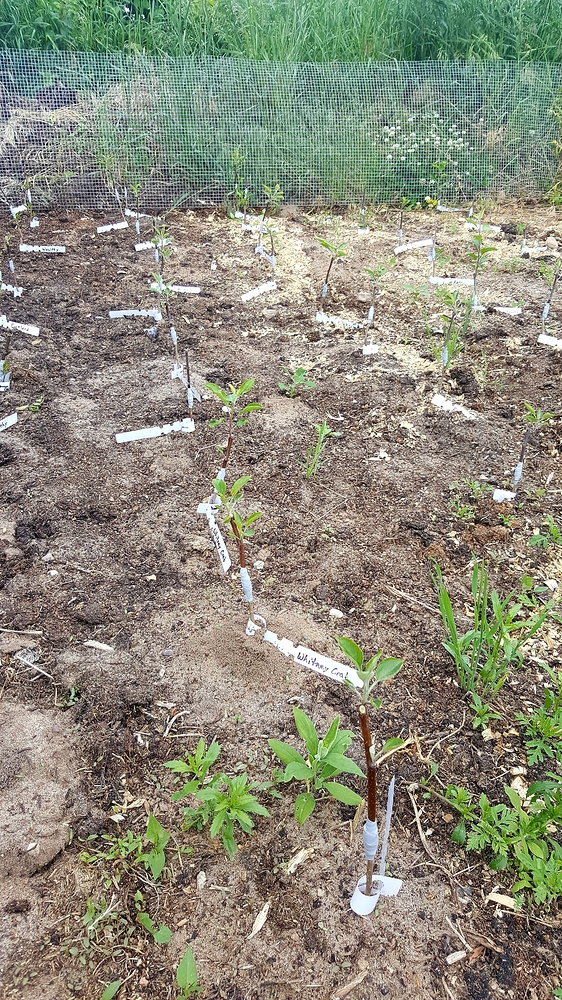 Pretty happy with results so far.

Just for what it’s worth, I checked my “dormant” grafts, and there’s green under the bark still on all of them. So I guess there’s still hope for them.

I also noticed, on a 20-year-old previously grafted tree, an interesting difference between two cleft grafts I did on it this year, on separate previously (years ago) grafted branches (making these second-stage grafts).

One did well, both scions are growing nicely. The other… no action at all. Same technique on both. What was interesting was that the host stock on the two was growing differently. On the one that took off, the nearby branches were growing vigorously, several inches of new growth. On the one doing nothing, the nearby growth had lots of leaves and flowers but no new growth hardly at all.

Interesting, but not sure what I can do with the observation.

Did you graft it low on a larger tree? If it is not dominating the rest of the growth it could take but not sprout.

I confess that I’m reluctant to chop off existing healthy growth, as my success rate is not great. Really threw a good tree out of balance that way on a cleft graft failure.

When I started grafting I grafted many things low and noticed that things were either not sprouting or were sprouting but never took off. It varies a lot depending on what you are grafting. Persimmons for example are one of the more extreme things, you need super dominance on them and no sprouts at all below the graft allowed to grow. Peaches also really need apical dominance and little competition. My early apples that I did that way would sometimes sprout, but then would not grow at all. This is a well-known phenomenon, discussed many places including here many times. Hopefully a few other experienced grafters can chime in with their angle on this issue.

Yes, its hard to chop it all off, and yes if the graft fails you have made a bigger mess, but if you want success in grafting there is no choice. I had three trees I didn’t get any top works to stick on this spring, they are now growing back from nothing and are about 1/10th their size before I chopped them.

I got suckered into grafting to some low branches on three nursery peach trees this year because they had vigorous growth and I was trying to maximize my multi-graft potential. As soon as the grafts took, they quit growing and the trees pushed new sprouts up higher.

And I realize that may appear misleading. What I meant by “grafts near the ground” are grafts to whips of root stock.
Of course, apical dominance affects matters, and I must watch that closely when using Geneva 30 whips, which need a few leaves low down to feed the scion as it begins life. I nip new stock growth from Gen30 several times in some cases, until the scion is getting good growth. This year Maiden Blush got off to a grand start (stock in ground several years) & I took all Gen30 growth off last week.

I tried stooling last year and cut away some pieces with terribly tentative roots. I grafted to them anyway and find little growth possible because the tufts of leaves from the stock are feeding root growth while keeping the scion alive as a secondary priority. Will do better in filling around the stools and husbanding root growth from now on.
That said, there are grafting successes that will just take another year to become whips. Lesson learned.