I went by the rental property with the large Reservoir fig today and found that it ripened earlier than last year. Last year it had a half dozen fruit around the 18th and a quart plus on 9/25. Today, there was over a quart already. 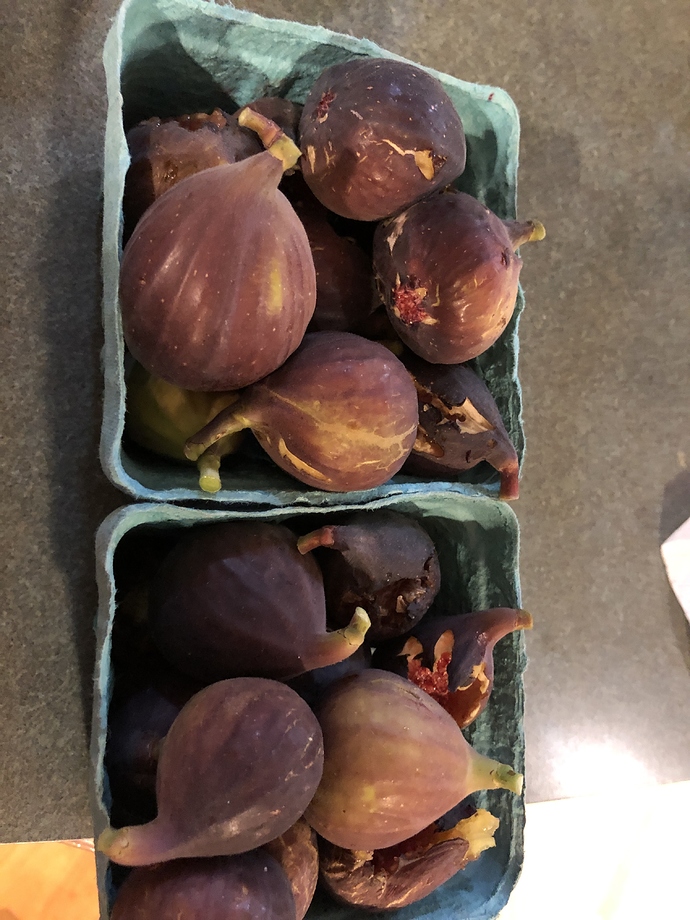 But, there was a lot of damage. I’m not sure if it was birds or yellow jackets. It was dusk when I was picking, so thankfully there weren’t any YJ around- just fruit flies. There were a few minor cracks, but nothing too bad. Mostly something was eating them…Which I can see why, as they were tasty and sweet, even the very damaged ones (I guess the fruit flies hadn’t been at them long enough for there to be perceivable larvae). 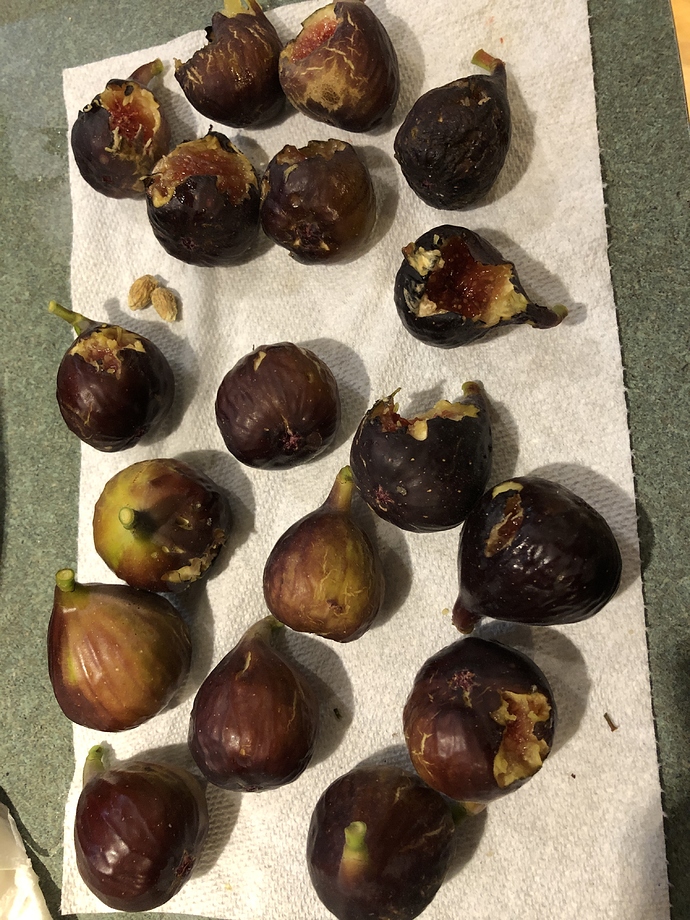 Most of the ripened fruit was high in the tree. Which gave me a thought- one all the fruit is done in the top, should I cut the tops off to ensure that light reaches the lower parts, which still have unripe figs? 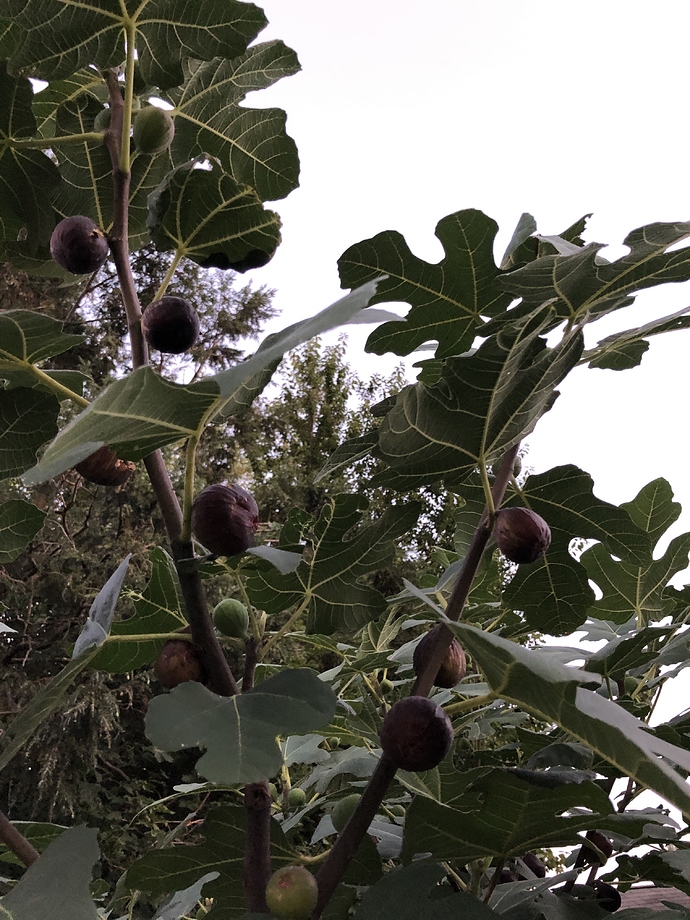 Here is a YouTube video on removing leaves to expose unripe figs toward the end of growing season. It makes sense to me. But some people are against it since they have never heard of this.

A fig on an in-ground Ronde de Bordeaux is now ripening. 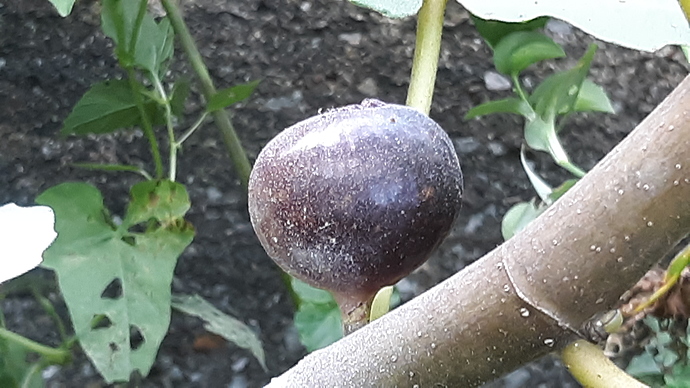 This one, in addition to being set back by hard freezes in April and May, was killed within a couple inches of the ground by an early hard freeze in November. So not too bad on that count. On the negative: very sparse fruit set. As I believe has been pointed out by other folks growing RdB in ground in marginal zones, you probably need to overwinter as much wood as you can to get a sizeable number of fruit to set. Of course, it may also do better with age: in early 2019, this guy was just a stick.

Color on inground Chicago Hardy. 71 days from fruit set to color. Not sure why fruit set was so late (June 28th) as plenty of wood made it through a mild winter, but maybe there is hidden damage or some other cue from a cold spring. 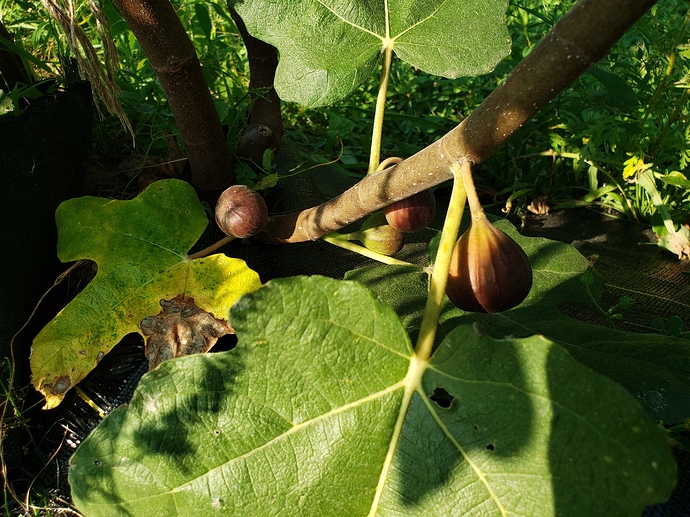 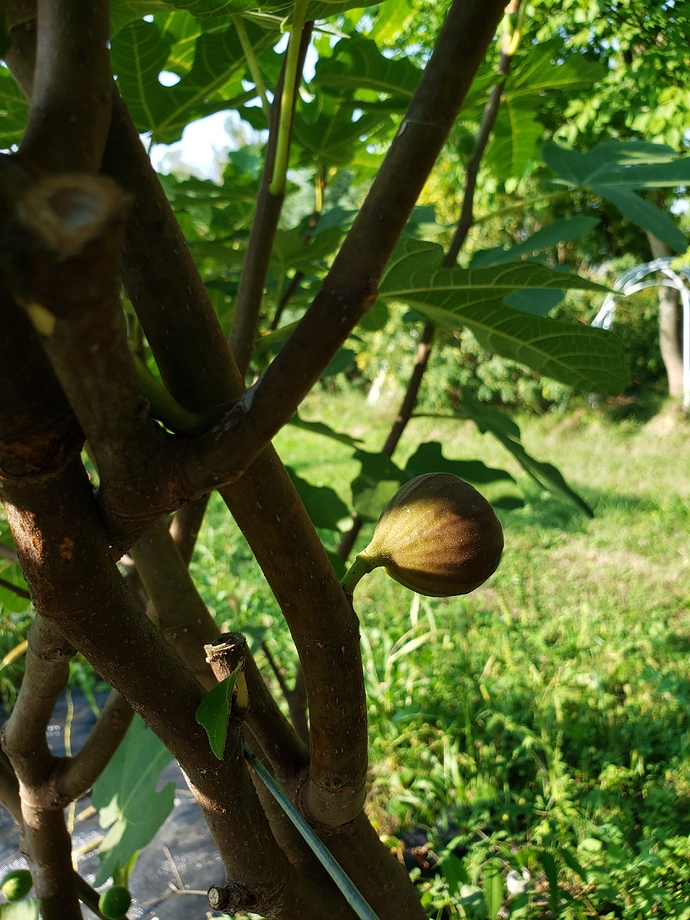 We had the late spring freeze, like somewhere in May. Spring was cold…

Update on VdB - ripening figs splitting due to heavy rains. still tasty, but unaesthetic.Since planted in-ground, not much I can do.

Also, if you buy VdB (or any other fig in areas with winter freezes) now, don’t plant in-ground until next Spring. it is too late in the year to plant in ground without high risk of failure.

I had the same issue where they didn’t set as early as expected. I blame it on the cool weather. Mine didn’t show any fruit set until we had days in the 80’s.

I harvested my first in ground Dalmatie of the year today. Syrupy goodness! They aren’t overwhelmingly sweet, and are very satisfying. Got another 15 or so swelling and nearly 100 that should ripen before frost. They resisted our rains pretty well. 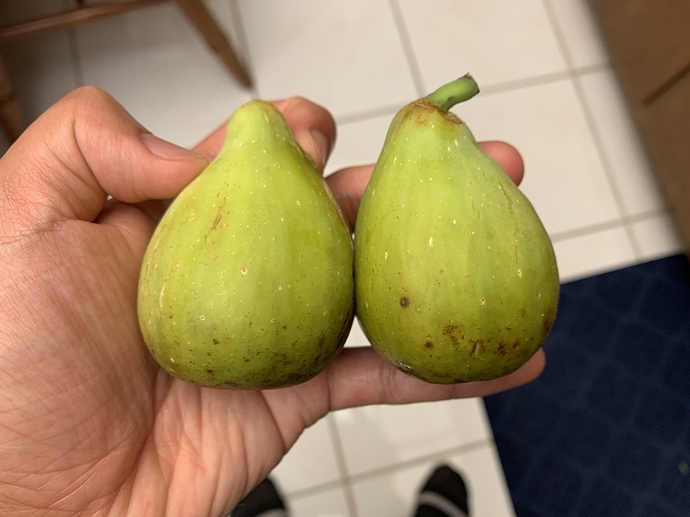 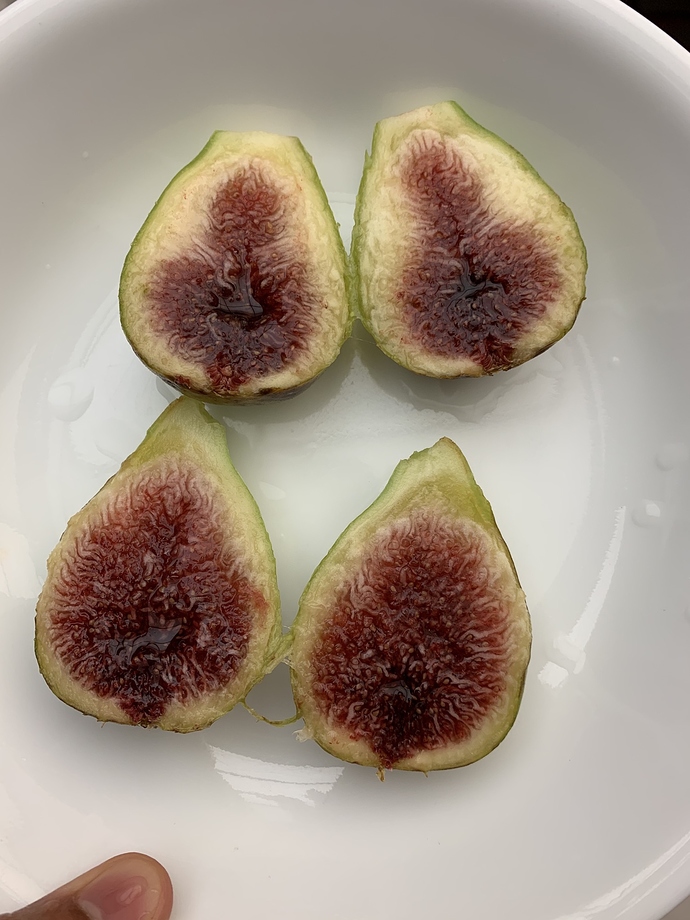 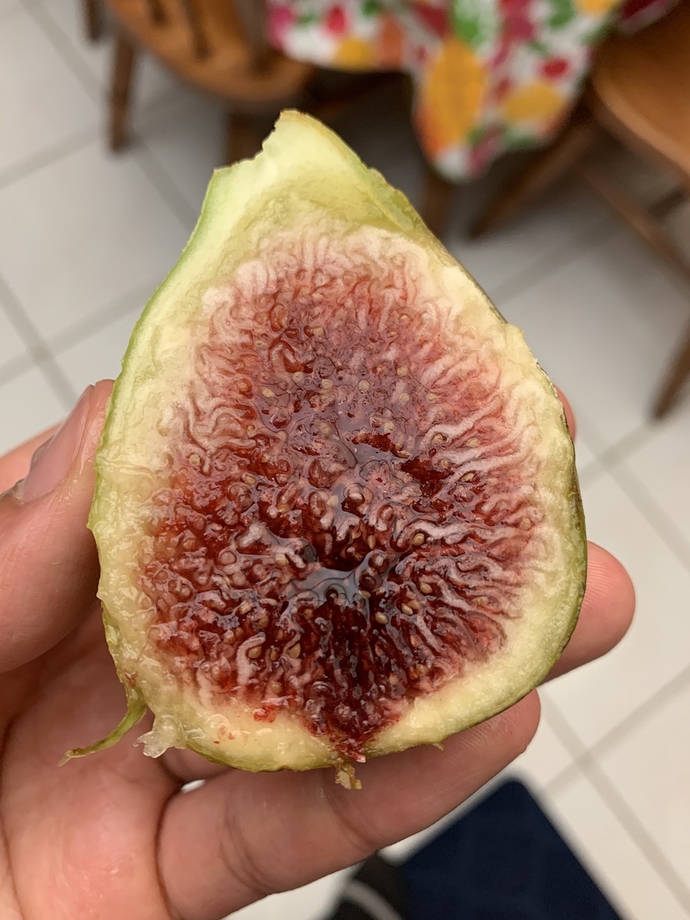 The fruit looks huge! How does the taste compare to CH?

They are 4-5 times bigger than CH! They are more syrupy than CH which tends to become more jammy as it matures. It’s a good fig to extend the season since CH will be mostly done in a week or 2. A slightly later fig but not too late for our climate. 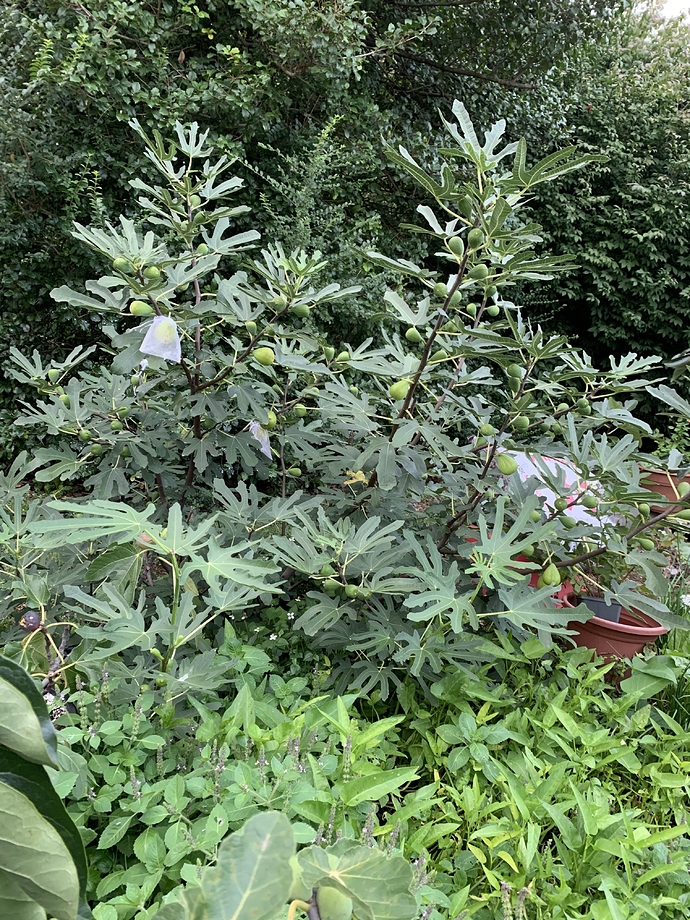 I remember you saying there’s a fig that I must grow in ground. Is this the one you were talking about?

I’m not sure I remember. I have many that I like but my favorite is probably Malta Black. Not everyone likes this fig, but it’s my overall favorite for production, earliness, and flavor.

My Sunfire is the only one ripening figs so far. I have got several nice ones.
I rooted it as a cutting Nov 2018 and planted inground spring 2019, fall 2019 it set fruit too late to ripen, it died back over winter but came back spring 2020 and has done well. Hare are some from a few days ago. 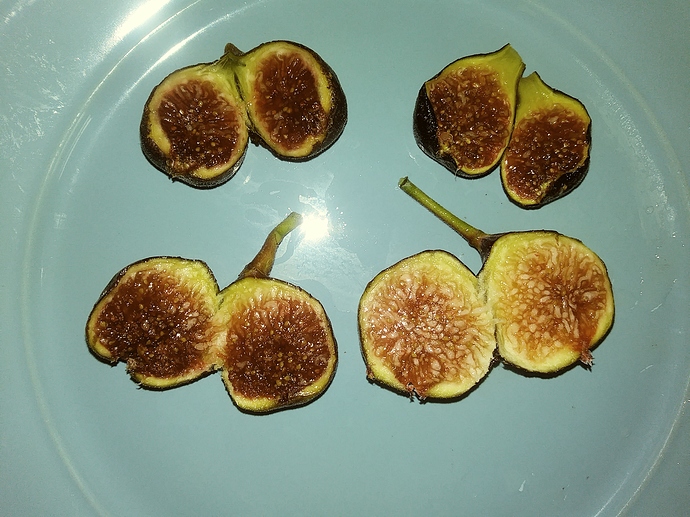 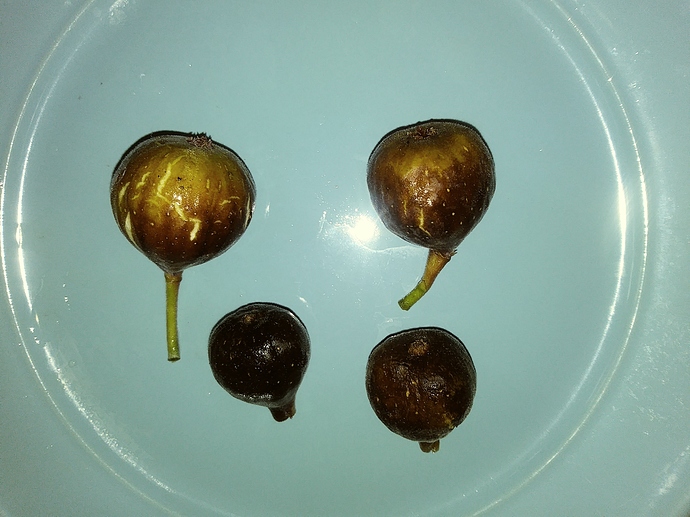 I was hoping my Hardy Chicago of the same age would be ripening by now too, but it seems to be dropping and not ripening, so far.

I am growing Hardy Chicago. It was my first variety and had low expectations. On it’s 2nd year, after complete dieback, I ended up with 3 ripe figs! Now I’m hooked.

If I expect a full dieback every year, should I expect the same yield? Or will the yield increase as the roots continue to mature?

Is anyone wanting to trade cuttings? I currently only have HC, but if you aren’t in the market for HC, I’d happily buy some cuttings. I’d prefer to find someone in zone 6a or 6b with a variety they have in ground with successful harvests.

Do you just have HC and Sunfire? Have you had any ripe figs? Also, if you don’t mind sharing, I’d be curious what part of KS. I’m in Johnson County and have HC. Got 3 ripe figs so far with a few unripe ones left after complete dieback on 2nd year roots.

Its been over a month I am enjoying figs from my in ground four trees. Please note the first two pictures on March 28th, 2020 and then next picture is on today 09-24-2020. I have four figs in ground Hardy Chicago, Salem Dark , ( Three year in ground) Carini and MBVS. ( Second and first year in ground). I like all four and very happy with production. 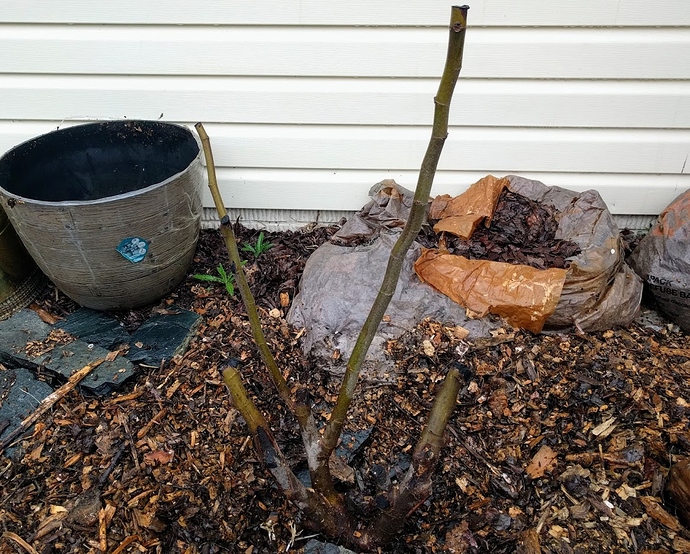 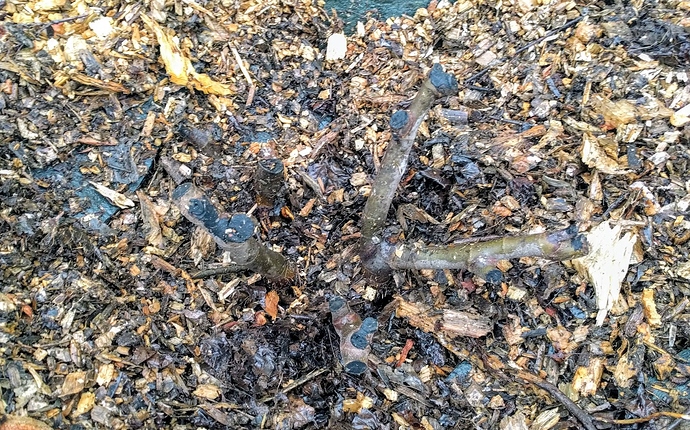 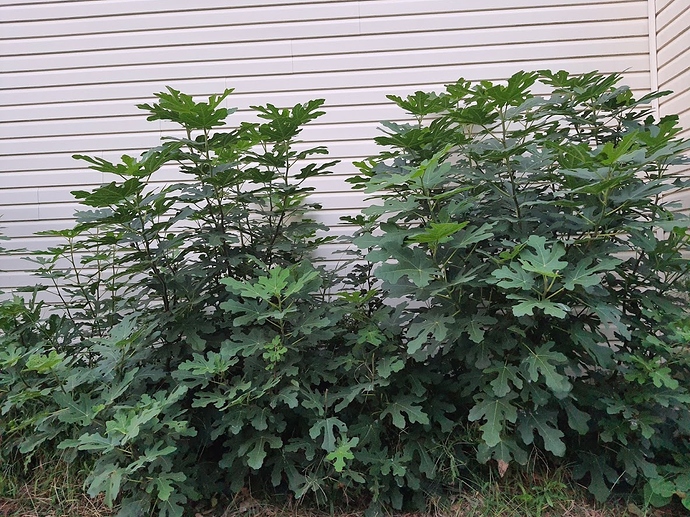 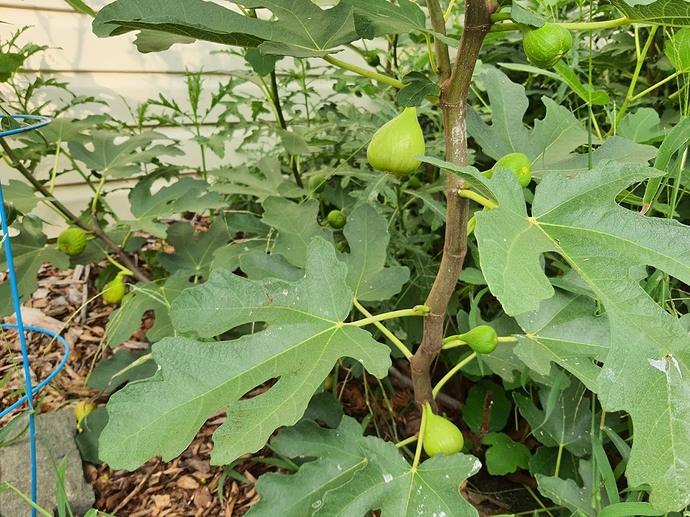 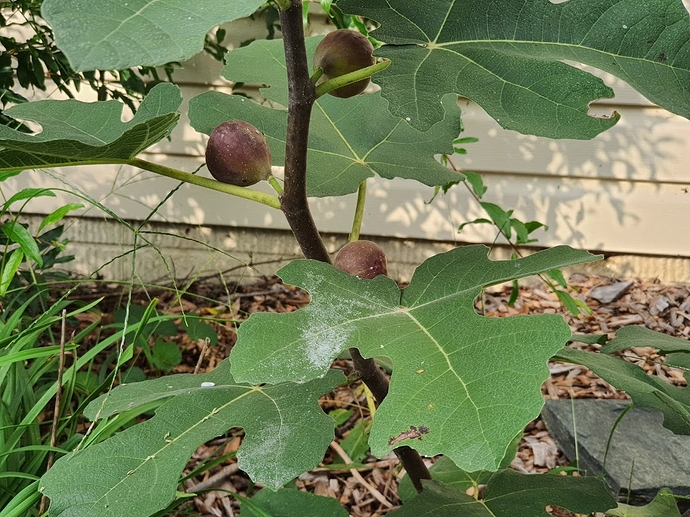 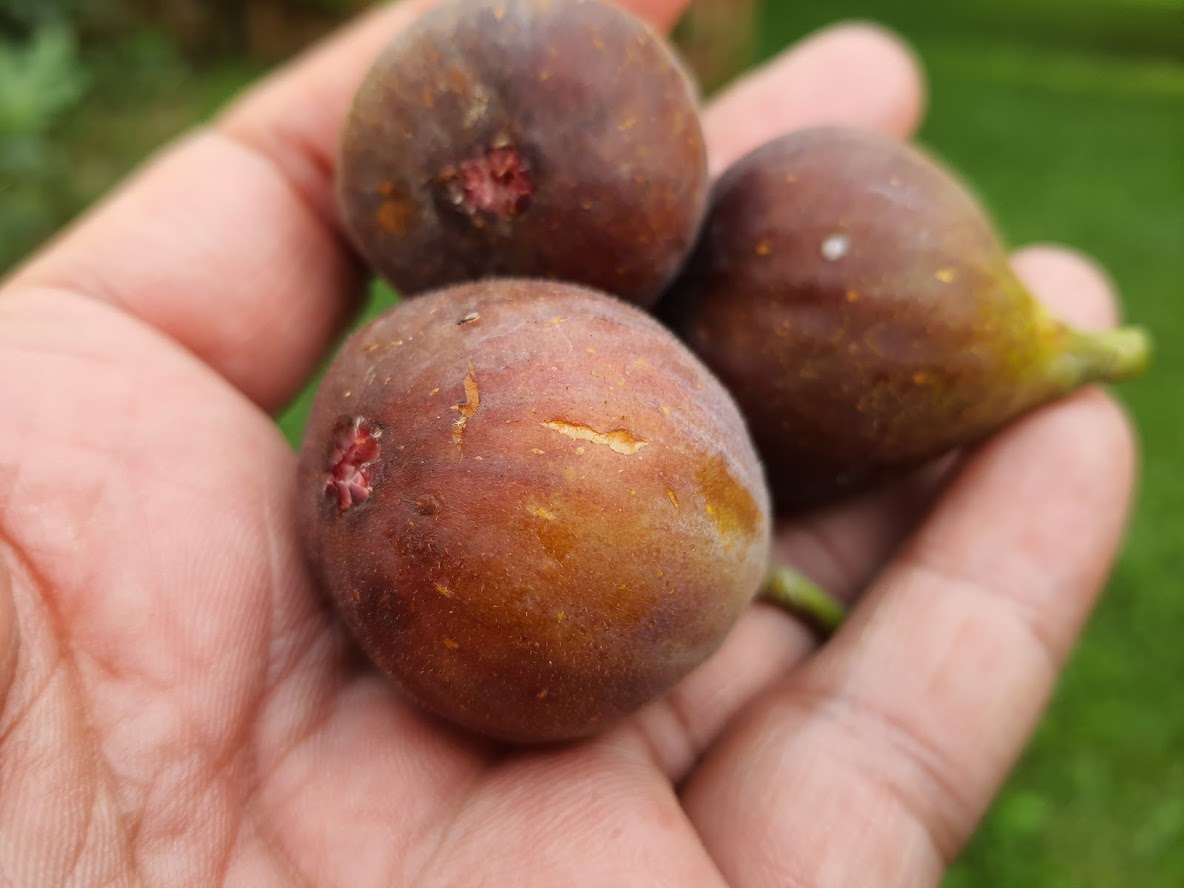 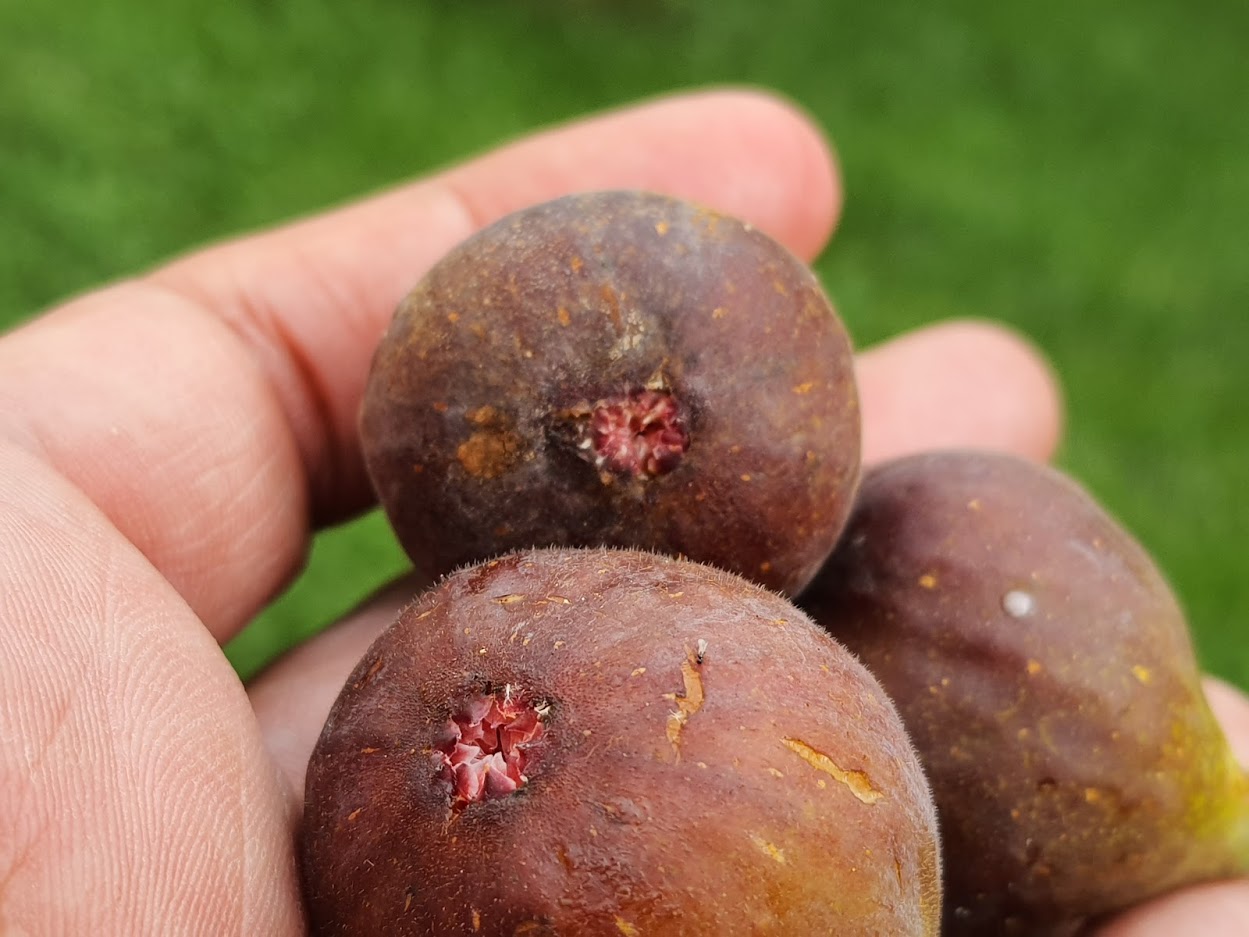 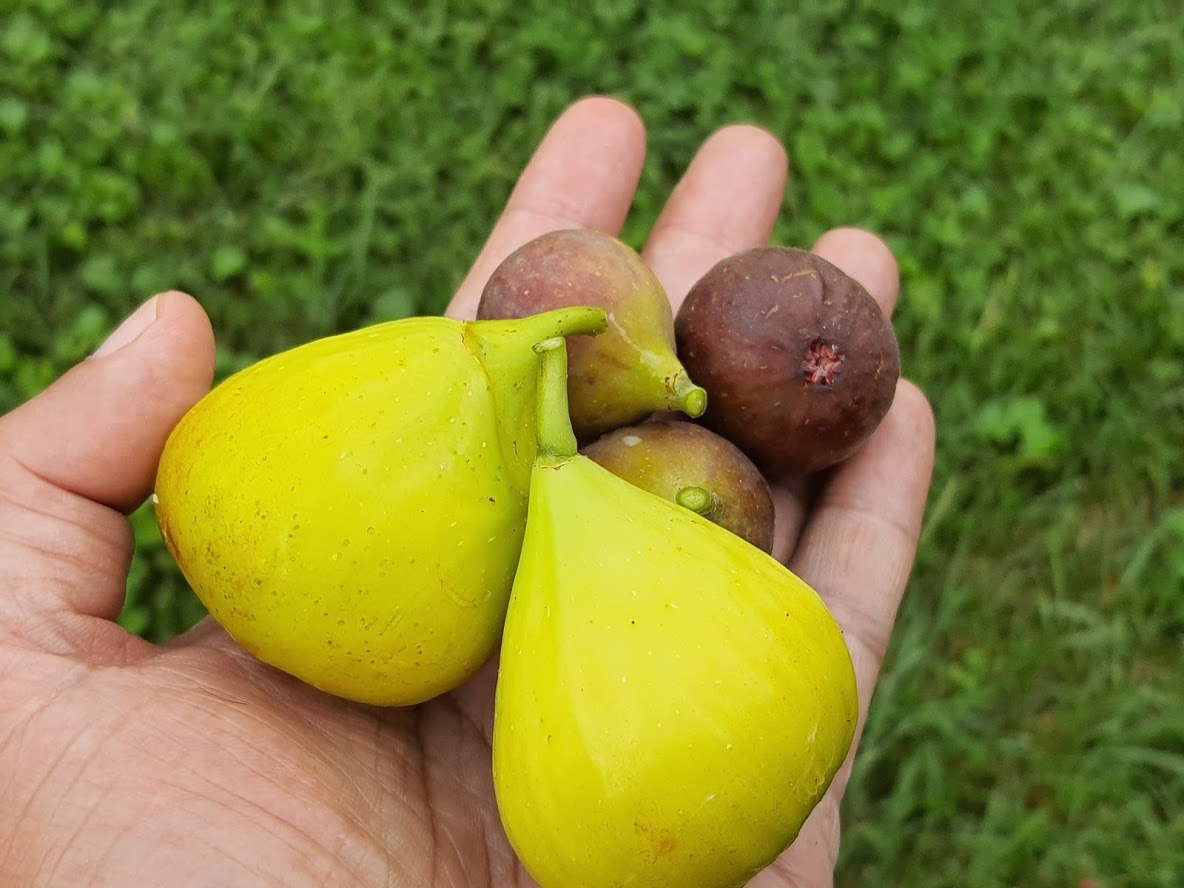 Yes as your roots get established your tree will have more inground energy to grow like crazy in spring after dieback and produce more each year. I am in Reno County. I expect my CH to do well but all figs need 4 years to establish the roots and do well. I am impressed with my sunfire, but I think CH will prove great also, others up your direction have given great long term reports.
I am getting several fig types to trial in this climate, I have 5 types inground 2nd year, and 2 more types added this year inground plus several brand new varieties in pots that I plan to overwinter and grow in my sun porch and airlayer copies and plant inground next spring.

those are some great varieties! It is the first I have heard of Carini