i have a red beauty female and arctic male i planted last spring from hirts. didn’t put on much growth but what they did was healthy. they are in sun for 8hrs then afternoon shade protected from wind buy a hedgerow to the west and my shed to the north. have them well mulched with plenty of room to grow. will make my arbor for them next spring. hoping they do well there. too cold for A. arguta up here.

What is your lowest winter temperature? Some ‘extra hardy’ kiwi are rated to -35 F, Tatyana was one I tried in Durham that was quite good sized, early ripening and tasty. One Green World sells it and another couple kinds of that subgroup. I also like kolomiktas ‘September Sun,’ and ‘Krupnopladaya’ for fruit over the more common ‘Red Beauty’.

Some assorted a kolomiktas topped with Michigan State arguta.

That Michigan State looks good. How does it taste?

Mule deer are known to eat them in the northern half of California.

Great flavor, MS is a very good choice for arguta…

we get -30f at least a few days in a regular winter. seen the record broken in winter of 08’ when it hit -50f! but -30f is usually the coldest. where i have my kiwi, i have a large shed to the north and a hedge row of spruce / mt. ashes to the west so they’re protected well. i may add a few varieties as i have room to extended the bed. what protection did you give yours in the winter for the 1st few years?

No protection, coldest they have gotten is -25F. I do mulch heavily around them with woodchips.

Hello, I grew some like Alan for 10 yrs or more, I forget the name. Besides the freeze damage and vigorous growth, they only really ripened to the “tropical” yummyness twice, they need summer heat to ripen correctly, more than I have here in Vt.

i already have mulched heavily with sawdust. i blow my snow there with my tractor so they will be covered well til’ spring . hopefully thats enough to protect them.

Some of my 3rd year kolomiktas fruited this year, shown with ‘anna’ arguta at 2 o’clock for size contast…some are almost as big. The first few were softening and dropping, so I picked a bunch that will go in the frig to ripen. 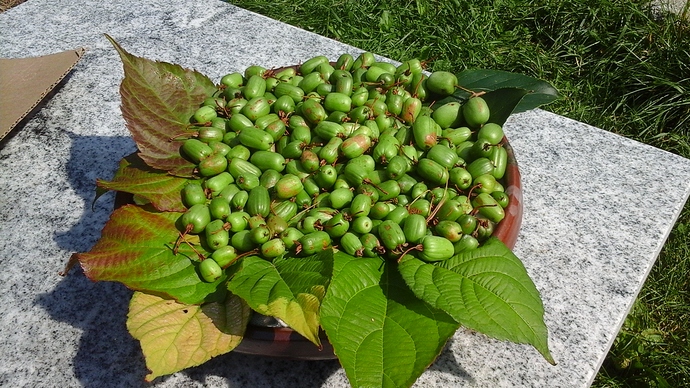 I have a few 10+ year old vines. My biggest problem is I really have never gotten the hand of pruning these things well to produce. I also spend lot of time pruning them back off my garage and off the cable lines (in a week they can overtake 10 feet of cable line if the weather cooperates…).

This fall I am going to make an attempt to remove 10 years of covered vines off my arbor and try to maintain a better pruning schedule next spring/summer.

As I am quite a glutton for punishment here, I have also just this year added Actinidia polygama in a different area. These are supposed to be a very hardy type as well, with small spicy fruit (A. polygama “hot pepper”)

mine are very slow to establish here. my anna and male are at 2nd year and barely put on any growth. put in a september sun this spring and it hasnt done anything either. spot i have them in is 8hrs of sun in the morning then dappled shade in the afternoon. they’re mulched well and i water occasionally when its dry. gave them a rig of worm castings and powdered comfrey last spring under the mulch . the soil was amended w/ compost before i planted them there. i noticed my male doesnt have the colors my females do. no pink splashing. could it be its too young or maybe a different species? they’re growing at the same rate.

Anyone growing Chang Bai Giant Kiwi? According to Hartmanns "A new hardy arguta female kiwi selected from Korea. The vines have high vigor and very productive. Firm fruits are large nickel to quarter size and are heart-shaped to round. The plants are extremely hardy in cold climates. The flavor of the fruit is mostly sweet, with very little acidity. Male pollinator is Meader. Hardiness Zones 4-7. 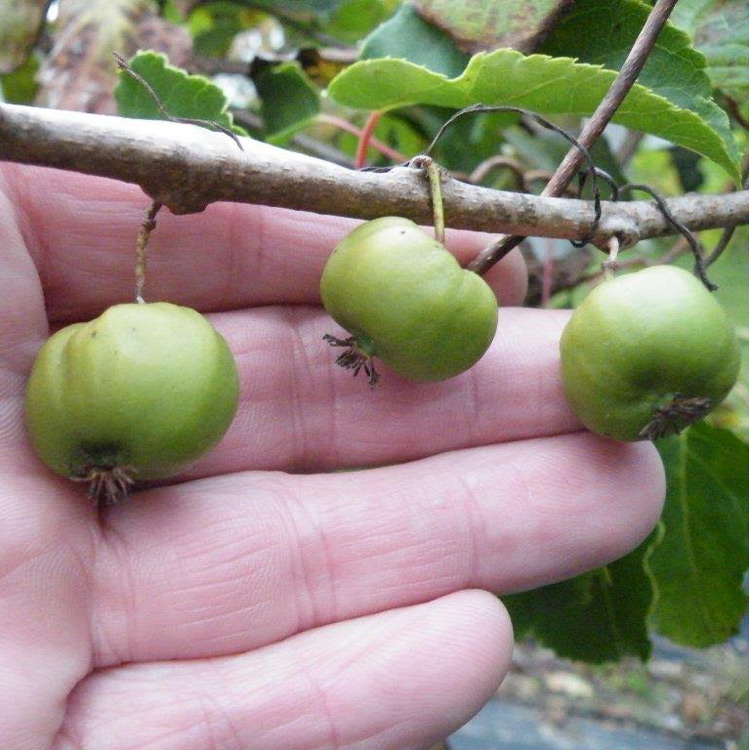 Changbai Mountain Female (Fruiting) Variety A female kiwiberry variety introduced from seeds brought back from the Changbai mountains on the North Korean-Chinese border.  The vines have good vigor and yields if provided proper conditions. ...

Michigan also looks good
“The common name is MSU also known as Michigan. The plants are very productive with acceptable medium to large fruit size. The fruits have a good flavor mostly sweet with some acidity. The oblong fruits are firm and attractive ripening late with Anna kiwi. 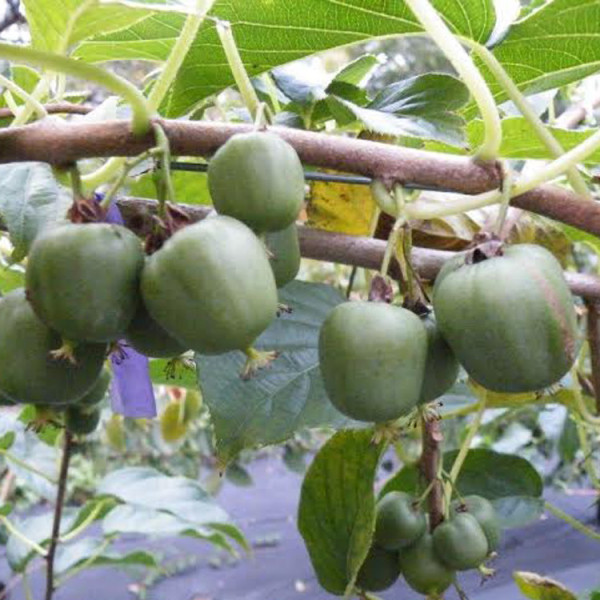 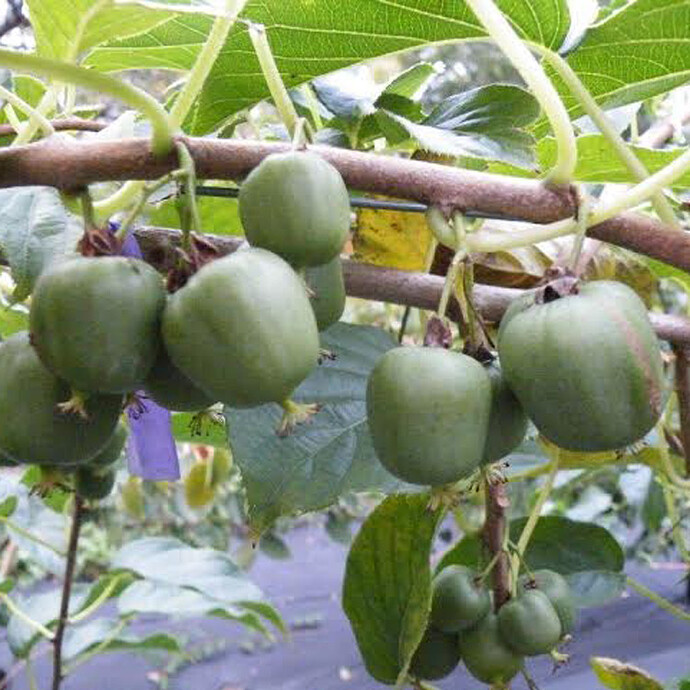 MSU Female (Fruiting) Variety Also referred to as ‘Michigan State’, ‘MSU’ is a large-fruited variety found growing as a landscaping vine on the campus of Michigan State University.  The variety produces large, oblong berries with good...

Hartman’s will be your best source for vines at a wholesale price. Their MSU has not been true to type, it is mislabeled Anna. They are working with UNH to get DNA verified material and so in a year or two should have things worked out. I have their Chang Bai, hasn’t fruited yet. I should have plenty of cuttings later if you want to try rooting your own, they are very easy.

Hi! I am growing both: Chang Bai and Michigan State (4th year) I planted a male plant each year and it always dies in the summer, so no fruit yet! I now have 2 Meaders in pots (grown from cuttings) gowing in ground some time this year. I hope at least one of them makes it. Chang Bai is in the “half shade” of a chain link fence with slats. It was never snow covered and it super healthy (no dieback, no sign of disease) in my Can zone 4b. Michigan state is always under snow as I let it creep on the ground until I have a male. It does have some dieback, even if it is protected by snow. So it is definetly less cold hardy than Chang Bai in my experience. I would love to plant Tatyana, Natasha and Andrey. But I can’t find any canadian sources (at a reasonable price). Whiffletree was selling it before.

I planted 7 or 9 cultivars in Fairbanks, Alaska back in 1988. I moved away in 1989, and didn’t return for 8 years. Despite utter neglect, a couple (no idea which) had survived and continue to grow rampantly. No male survived, so I bought another. It died over winter. I bought a couple more and they died too. Meantime, I also bought some other females. The dead males were Arctic Beauty, which seem to be too tender for us here, so I tried a Pasha male. That one survived and went into puberty three years ago, so I finally saw my first fruits! They bore again the next year, and also last year, so I layered a few more to spread them around. This year I didn’t see any male blossoms, but I’ve learned that one of the female cultivars, Dr. Szymanowski, is self fertile and it appears to be setting fruit now. Pretty stoked to get kiwis in Fairbanks.

Mine took several years, but now they are quite vigorous and carefree. Main problem is the deer. I haven’t ever needed to prune them. I just let them grow on a chain link fence. Deer prune the back side. I also have Andry, Natasha, and Tatyana in another location. They are surviving, but that is about all I can say for them. My main problem is that I don’t care that much for kiwis. It’s okay as marble cake of canned preserves and yellow cake mix.