Hi! Hello Ceasar! The dioscorea bulbifera you sent me is starting to sprout! My yam berries (Dioscorea polystachya) are sprouting, already with small leaves… the first yam to sprout!

Keep us posted! I wanna see how their growth compares in a temperate climate versus the tropics.

My new trellis is already crawling with loads of yams vines, probably too many for the space. The new players on the scene are D. japonica, esculenta, dodecaneura, pentaphylla, bulbifera “Hawaii” and the possible Suavior. All are growing vigorously by now, but the old CV-1 roots I planted haven’t sprouted yet, which leaves me concerned. I was hoping to grow them from last years roots, to get strong vines growing, but if they fail me, I’ll have to settle for first-year vines from my last bulbils.

I placed my two purple alatas at the base of the Açaí palm, where I hope the shade will provide a cooler microclimate conducive to well-pigmented roots.

I’ll take some pics in the coming days, so y’all can see how they’re going.

My bulbifera didn’t sprout leaves yet, it’s just begining, just the polystachya. I live to grow yams, i’m starting to understand them now… i think i lost my alatas from last year. Just hope the ones you sent me this year sprout!

Hello Ceasar! How are you my friend? Do you have dioscorea trifida? In Brazil they call it cará mimoso… Thank’s!

My D. trifida was a disaster last season. They grow best with space, without competing plants, and I grew all of them in tubs with other hungry plants last season. Most of them hadn’t formed tubers by the time the vines dried. Only one formed a tiny tuber, which I discarded back into its soil because it shared space with some scabby potatoes. I was concerned that it might have been infected with scab, or at least that it might have become a carrier. I sent that soil to my mother’s flower garden, and a vine sprouted there (together with some polystachyas and a potato). I’m not sure I’m comfortable propagating it, but if it seems healthy enough at harvest time, I might be tempted to do so. I’ve been on the lookout for more of them at Walmart (where I bought my original seed piece), but I haven’t seen them for sale since. If my current plant is unhealthy and I don’t find anymore at market, I’ll have to pay a visit to one of the Ag Research Stations, which have this species together with several others. I’ll keep you posted on how things go with this one.

I will update all te situation too, here and on my thread. I bought more alatas on ebay from India and on the italian nursery where i get my plants last year. 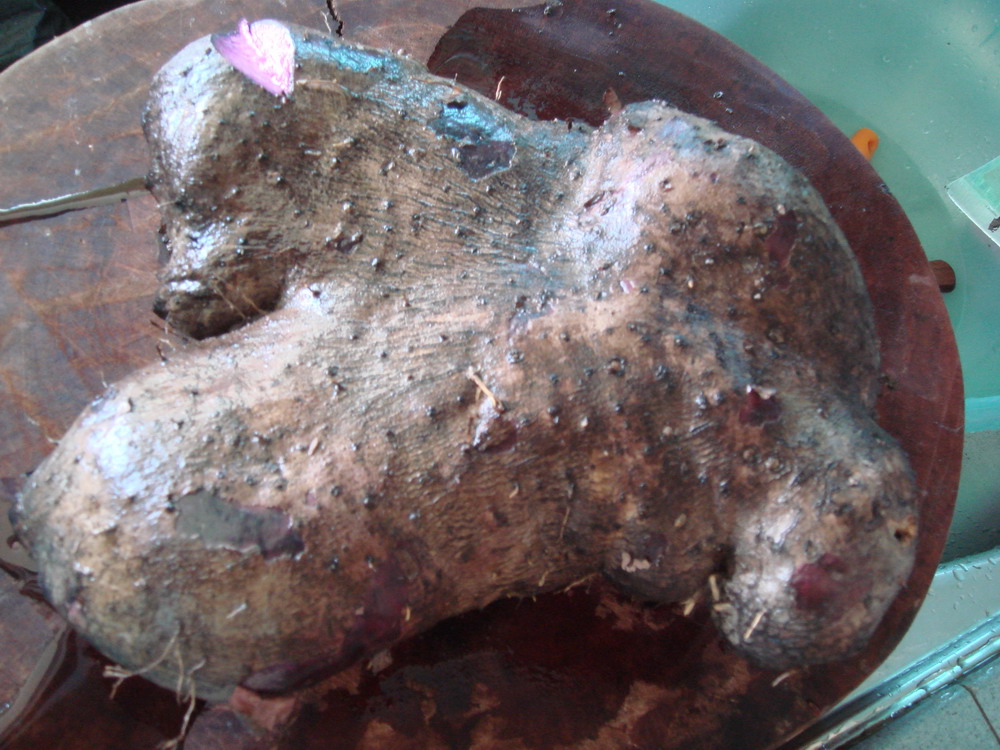 Of all the varieties of Jamaican yams, nothing beats the taste of the pum-pum yam. Like our page- 🚩 face Xpression production ImageIt used to be that there were two seasons in the year - crop season...

Great links Luis! And your yams are looking good! I’ll bet they grow more vigorously next season, since they’ll be older.

Sena seems to be a shy bearer if last season is any indication. My vines are now in their second year, and resprouted a couple of months back, but still no sign of bulbils. Hawaii on the other hand seems precocious… I accidentally killed back the vines by drought during my recent neglectful period, and by then they had already formed a small bulbil. They’ve since resprouted, and already have a much bigger stone-like bulbil growing in size right now. Here’s some pics: 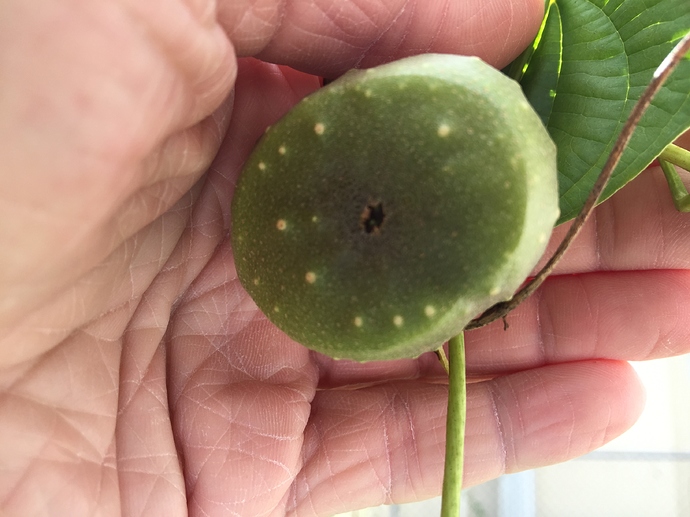 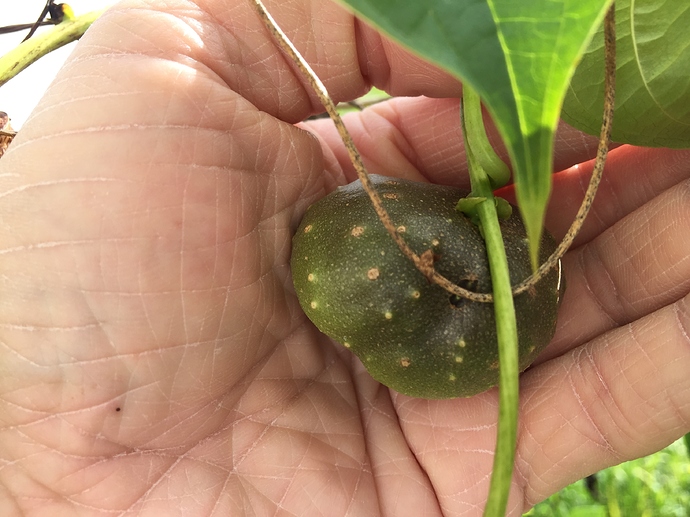 Since my yams had died back, I lost track of which container had which for a while, so I’m not sure where the bumpy one is (doesn’t help that it shares space with 2 other bulbiferas), but once it sprouts and starts bearing again, it should be no problem. There was a tiny bulbil whose viability seems dubious, but if I can get it to sprout, I’ll have a confirmed specimen.

Dark Night St. Vincent made a pair of bulbils, as did pentaphylla. CV-1 is covered with them at my Grandmother’s (the one at my house, not so much). This year I’ll be more diligent and organized, and I’ll put an irrigation system in place to keep them watered. 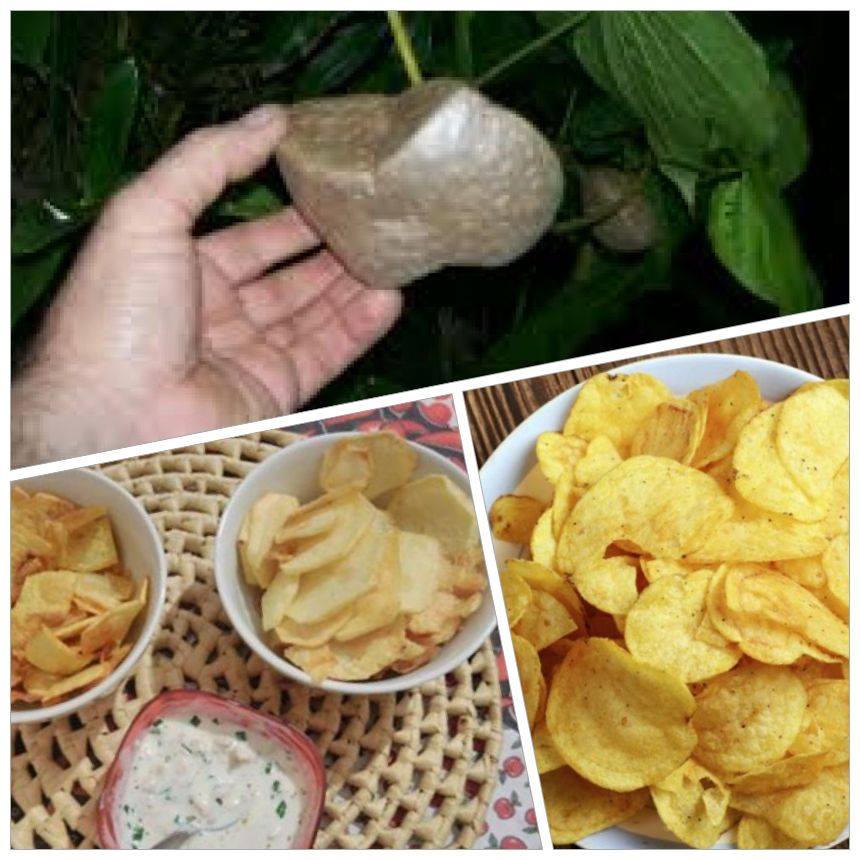 Thanks Luis! I’ll try this one out. Last time I tried to fry up an air potato, it didn’t go too well… Soft (like some styles of homemade french fries), and a bit bitter, but I attribute that to the bulbil not being fresh. There’s a lot more experimentation to be done in the kitchen with this species. I’m eager to try any recipe I can get.

Hi! My bulbils are very small…

They’ll keep growing until they drop or the vine dries out. But since your vines are still in the first season, most will turn out small anyway. Take this chance to propagate, and pass 'em forward! I think they’ll likely do well across the Mediterranean region, so the more that grow it, the merrier! As long as care is taken to contain them, invasiveness shouldn’t be an issue (especially as it’s edible).

So you think i can plant this small ones?

Yes you can. Funny story actually, I had nearly 100 small bulbils the first season (several vines). I was concerned about viability (for both the small bulbils and the mother tubers), so instead of sharing them, I planted them (fully dormant, fully buried) with low expectations. Almost every last one sprouted, as did the tubers. Even tiny ones, nearly as small as pinheads, were sprouting.

Now, that’s not to say that every bulbil is a guaranteed plant. Some bulbils did rot without sprouting, and I have since planted small bulbils from my African strains which did not sprout, but I think it has to do with maturity. If a small bulbil is coming off of a dried up vine at the end of a full season’s growth, it’s probably viable. If it’s plucked from a young vine before its time, or from a vine that dried up prematurely, it might not have had time to develop properly (this was the case with my African bulbils).

Got a new variety, bringing the total up to 5. More to come later.

I’m calling this one “Mexico”, for its source location: 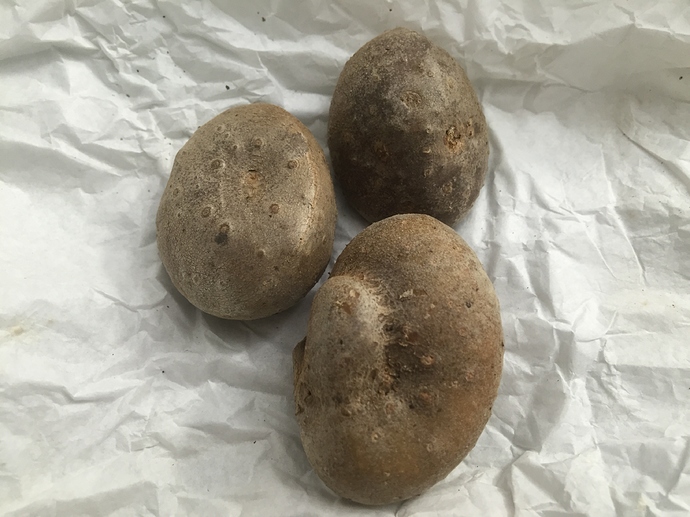 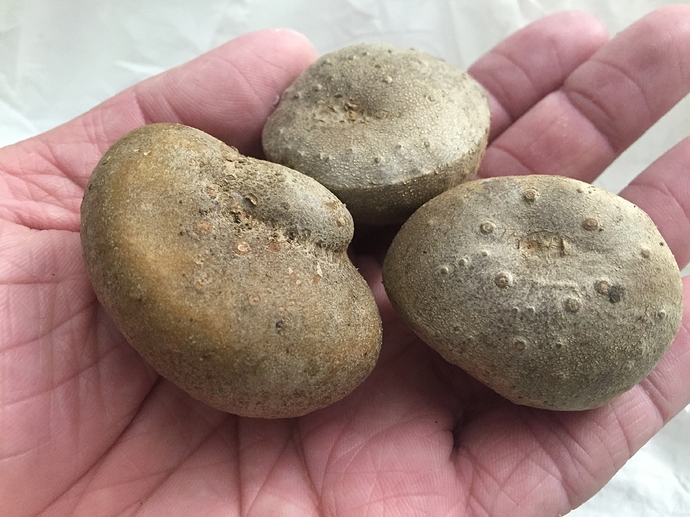 Hello Ceasar! This are the ones you buy from Mexico on ebay?

Yep, the same ones. They took a long while to get here, but they’re in excellent condition.

I buy it too but didn’t arrive yet…