Asparagus growers, Sat. when I picked I didn’t find one asp. beetle. This afternoon there were thousands, several on every spear. They feed and cause severe spear contortion and spread viruses. 4oz. of Sevin SLR in 1gal. water w/a little dawn will control this pest. 1 day reentry.

I keep a garden log every year, and it would normally have come up by now - particularly given that it’s an early spring here. I also see a few last year’s seedlings up.

It was a bed in its prime, about ten years old, but last year was kind of sparse. I stopped cutting early and fed it well, hoping for a recovery, but it looks like not.

ltilton,
I once started some asparagus from seed. The instructions were not to pick until the third year. It became tall, robust bushes. Then in the fall of the second year the plants all turned a rusty brown. The next spring there wasn’t even a trace of it. I was so disappointed. I assume it was some disease, so did not try to plant any more at that address.

There’s been no sign of disease. The bed doesn’t get good drainage, despite being raised, so I figure that might be it. otoh, Murphy, Lord of the Internets, must have seen my post, because today I saw a single spear up.

So maybe it’s just late. Glad I decided to wait til May to exhume.

Lois- as you may have seen, mine behaved strangely this year as well. I had a few spears pop up on time or even early, then instead of all others comming on within a week, it was almost a month before they came on strong. So by all means, don’t give up! Most of mine were late but I’ve ended up with best year ever!

Hi Lois, I’m Phil. I used to grow 14 acres of asparagus(I’m a glutton for punishment). At about 10 yrs. we noticed a marked drop off in health and vigor of our patch also. I also stopped cutting early and feed well but it seemed not to matter, the asp. had fusarium and once it started that was it, even w/ a resistant variety. It came after 2 wet years in a row and fusarium stays in the soil for years after. Sorry, not what one wants to hear, Iowa State told me I needed to find a new location for my asparagus.

Well, that would be bad news, but likely.

I don’t have a good spot to start a new bed so if it’s fusarium, that would probably be it. Too bad if so, I looked forward to the harvest every spring.

Thanks for the information.

I’ve had a hell of a time getting my asparagus patch going. Everyone says it is so easy, but that has not been my experience.

It just does not thrive where I have it for some reason. This is in a sort of raised bed (behind a short retaining wall). About 30cm of new blended topsoil brought in and put on top of site soil. Had the soil tested the first year before planting (result attached). Put on some pelleted lime the first year and planted good looking crowns from Nourse about 20cm deep in trenches, gradually backfilled as the plants grew. Plants did grow but not that well, and almost none came back for year two. So I broadforked to loosen the soil and we tried planting seeds. Most came up, but again did not take off in growth. A couple crowns from the first year put out sizeable ferns, which seemed to get some heavy beetle infestation in late fall. We get decent rain during the growing season here, but I watered sometimes if rain was too infrequent.

End of year 1 and 2 I layered on about 2cm of bought compost, and the wood ashes from my barbecue, some azomite scattered around. This spring some thready spears are just now coming up, but plenty of bare spots too. So I guess I’ll try some more lime (should test the soil again), more compost, and some new crowns to fill in.

In the same bed, but on the other side of the walkway, strawberries planted the same year are doing great with roughly the same treatment with the exception of putting on pelleted sulfur instead of lime. They both get pretty good, if not full, sun.

I’ll probably keep trying for maybe two more years, then I might have to give up and plant something else that likes growing there. 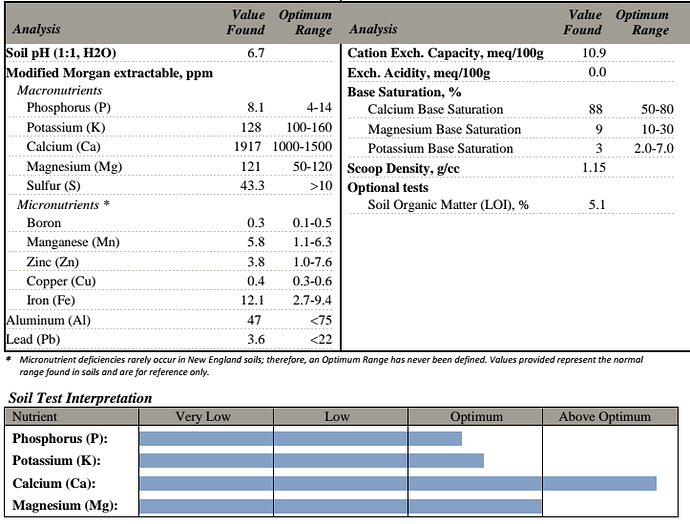 I’ve been a little disappointed in my 2nd year crowns, I wasn’t expecting to eat any this year, but i was expecting to see them start sizing up and expanding more. I plan to feed them more often, and provide more water this season. Worse comes to worse, shovel prune them and plant more fruit trees

HollyGates, It sounds like you’ve put plenty of effort and thought into your patch. One thing, other than a LOT of crushed limestone, I add at planting is super phosphate. It seems to get them off to a good start. I do hold off fertilizing a new patch until pretty late in the first season. Then I’ll fertilize again while dormant sometime in Feb. Weeds can also stunt or completely choke out a young crop. I had health issues last year and couldn’t tend a new planting as I should have, and they still came back and are looking pretty darned good for this year–and that was after severe floods in June followed by 3 months of no rain.

Asparagus this year has been a roller coaster with crazy weather. We’ve only picked 80 lbs so far and are even behind last year’s progress, which I thought was bad. Hopefully, we’ll get some warm weather and sunshine soon, and production will pick up.

Phil - sad to say, you were quite right about the fusarium.

A couple of days went by w/o picking the asp., ok it was a week, and the ferns were 7’ tall. We tilled shallow on both sides of the rows and cleaned up the middles, fertilized, and sprayed Prowl H2O. I’ll pick a few spears occasionally but my asp. is done for the year.

It’s that time of the year again, and I LOVE IT!!! For me, there are few pleasures greater than fresh picked asparagus. Only us fruit growers would say waiting 2-3 years between planting and eating is no big deal, and for me it’s well worth the wait. I picked a few last week but this is my first serious harvest. These were just steamed and then coated in butter and parm cheese. Not the healthiest way to enjoy them, but dang sure one of the best (IMHO)!

Anyone else enjoying this delicacy yet?

I have just a few spears poking up

We are turning to asparagus. We’ve already quit cutting on the new plot but our third year crowns are going strong. When I think of all the years I neglected planting it because it took so long I just shake my head… the next dish is going to be Asparagus and Chicken Pie.

I love asperagus too. My favorite is a light coat of EVOO, sea salt, cracked black pepper, and chared on the grill. I could ea that stuff like candy.

SO true Katy- 3 years used to sound like a lifetime. I just planted a pecan and didn’t think too much about the 6-8 years it will be before I get anything. Fruit trees teach us patience if nothing else.

I’m curious…you said you already quit cutting on the new plot…when was it planted? Last year? If so, you’re saying you did harvest a few the first year? I’ve read that actually is good for them (to just cut a short time) and I’ve read not to cut anything the first year and some even say the second year. Just wondering how you are doing it. I’m always expanding my patch so I’m curious. THanks

I had to google EVOO…and of course I felt like an idiot when it came up! ha. But yea, that sounds GREAT.