Thanks Phil, I’ll ask a couple more questions and answer a couple you asked. If I recall this correctly from when I planted them, the literature indicated that the Purple Passion were supposed to be planted much closer than the others. So they’re kinda close to one another, and I just assumed that the underground roots would kinda tend to intertwine over time, and that’s where my comment of maybe damaging others came from.

The bags of Humus (which I wanna say has a lot of composted cow manure in there?) I get from Menard’s and that stuff just looks like really black soil. I’ve been putting that on, then I’d rake up some oak leaves to cover the row with several inches of that. Then I’d maybe hit it with the hose to get the leaves wet before it would freeze overnight so as to kind of hold them in place so they wouldn’t get wind blown. Then of course the snows would come and I would be all smug, relatively happy with myself assuming I was doing right by my Asparagus patch, keeping them all cozy against the harsh winter weather. Then come late March or early April whenever the really cold temps are gone, I’d go rake the leaves off the row and sprinkle some 10-10-10 on there and sit back and see when the first spears would appear. So that’s the extent of the mulching I do. Once I get the leaves off the row it’s me against the weeds on a go-forward basis! But if that’s a no-no, I can for sure cease and desist doing that.

I have not been snapping the spears, rather I scrape around the spear with my finger to get it just below the surface, then I make a little nick with the knife, to give it a breaking point (kinda like I do with a Banana. If I don’t score it just a teensy, I’ll often mash it all up…) but I’m super careful to keep the knife away from all other spears, then I can brush some dirt back over the spear that I just harvested.

I’ve not been hit with a lot of beetle problems, and am not sure why. I had read the differing positions of leaving the ferns all through the winter -vs- cutting them and getting rid of them. I chose the latter, as I’d read that the dead ferns are just like a motel 6 for the li’l beetles, and I didn’t want to offer them up any hospitality - at all! Are you okay with that approach?

On these couple that I have now that are sending up skinny shoots, you think I’m okay to cut 'em down now, and see how they do next year, or would you think I ought to get 'em out of there now and put in a new crown?

Harvested our first meal of asparagus last week, an early variety I started from seed a couple years ago Precoce d’Argenteuil. Purple Passion are just about ready. I need to find a spot to put lots more in though so we have plenty to freeze.

I’d leave that stuff alone now as raking it of will activate weeds. The reason you mash your spears is you are taking them too close to the fibrous butt. Asp snaps cleanly and easily right where it is tender so hand snapping eliminates the tough spear ends. I leave the ferns all winter to catch snow. In a normal spring I will mow them off as the snow is gone and the ground is still frozen exposing the AB and killing his destructive little, oops just got called to Sioux City, arm pit of Iowa.

Kevin, I tried asparagus your way tonight – sautéed with a little parmesan on top. Big thumbs up! Usually I just roast it in the oven with olive oil and salt, so this was a nice change of pace. The mix here is Jersey Supreme, Purple Passion, and AsparaBest (I know, I know). All tasted good to me. I need to take Chikin’s advice and cull out some females this year.

Looks great Steven, and I’m glad you like it…my only complaint is you are too healthy! haha. I put so much butter on mine before the parm cheese that my whole plate has a little yellow oil slick! haha.

I’m so glad I found this post to re-read it! I’m starting up a new garden spot in a less boggy spot and hope that will help my asp plants. Also wanted to order the Jersey Giant but Nourse doesn’t list it

I don’t know if that means it’s sold out or what… Is the Millenium also an all male hybrid? Or any other recs as to where to buy jersey Giant? Thanks so much!

How big of a bed do you want to have?

We got some from this place a couple of years ago. They were okay size and were very viable and there were a lot of extras included. I’m not sure they were all two year plants though.

Hmmm good question. My perimeter netting limits me to 160’ perimeter so that’s about a 40’ side and maybe half that could be asparagus - maybe 20’ by 5’? Envisioning spaces is definitely a weakness of mine! What could I put in a 20x5 or so bed?

Thank you! I think I recall reading about some people receiving varieties that were supposed to be Jersey Giant that really were something else so it’s good to know you e had good plants from them!

Ours will be two years in ground this spring. We cut some last year and they were good. I’ve seen no females so I guess they are correct cultivar. Some of the crowns were very small. We ordered 50 and I think we had around 58 crowns. We lost very few (3-4 ish) The only fault I’d say were the size of some of the crowns but they did grow well.

Asp rows are usually 5-6’ wide. The closer you plant in row the smaller the spear size. The giant produces very large spears unless you crowd it some. Daisy Farms had a good selection of asp varieties.
Some do nots. Don’t plant them 12" deep. Dig your trench 12" deep and put triple super phosphate and potassium sulfate on the bottom, this is one place its ok to be liberal, cover with 6" soil, drop your plants bud side up every 8" and fill the trench.
Don’t let grass get a foothold, grass will eliminate asp plantings quickly, especially quackgrass.
Harvest the biggest spears the second year, research shows this will increase your harvest up to 7 yrs. out.
Did I say keep the grass out!
If you get smallish crowns, double them up.
Enjoy your asp.!

Yes, you also control spear size that way too. Jersey giant will over size spears 12-15" apart. Rows that far apart also allow you to run a mower or tiller between the rows with mature fronds. 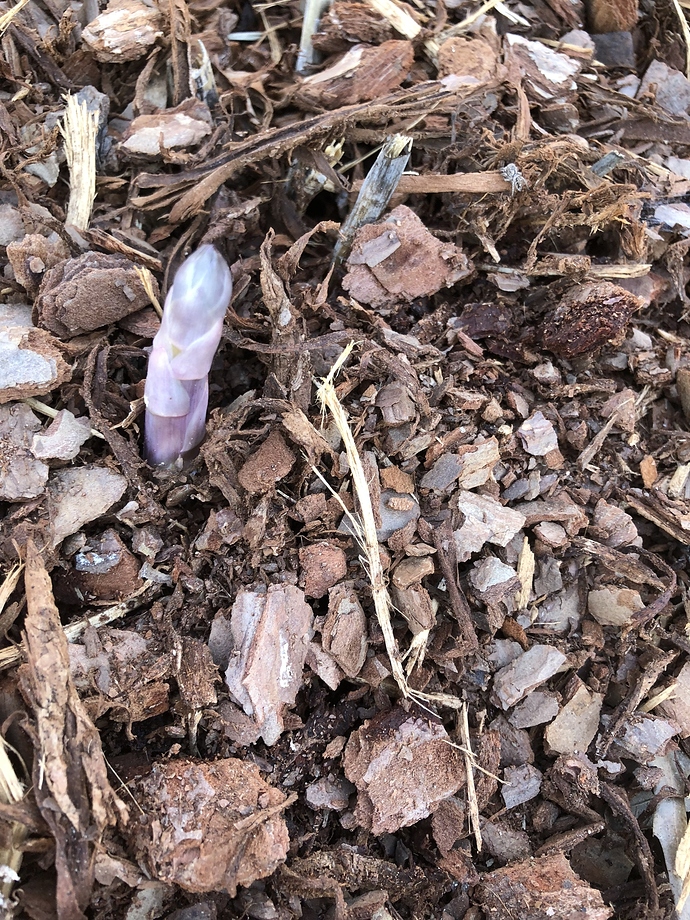 First asparagus of the year in MA. Purple Passion. I had enough to sauté a few in butter as a side tonight. 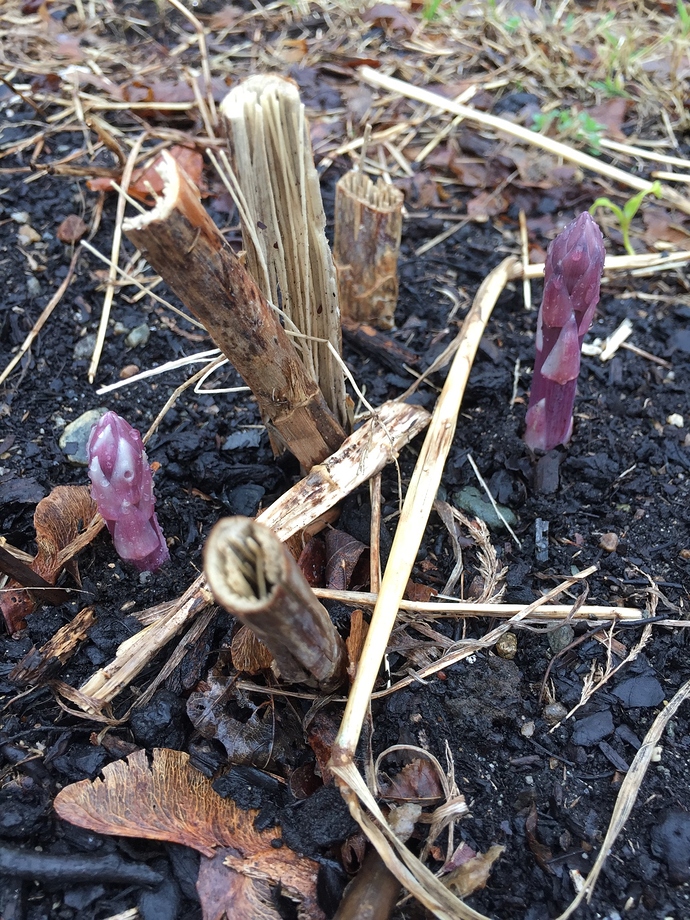 Nice to see others enjoying these wonderful, heaven sent delicacies! My patch is in its 5th year, though I’ve added more every single year! This year my oldest ones are bigger than they have ever been- just huge! I had my very first ones about 3 weeks ago right after a warm spell here in TN. Then it turned cold and they stopped coming up for a couple weeks. But the past week they’ve been popping up ALMOST as fast as I can eat them

I steam most of mine, then add lots of butter. I also put Parmesan cheese on mine. In fact, I just discovered that walmart sells a small tub (like cottage cheese comes in) with shaved Parm (not shredded, shaved) and putting that parm and butter on fresh asparagus is just incredible. Sometimes I have it for lunch and again with dinner. I also have even taken some, dipped in milk and then flour and fried it-sort of like fried, breaded squash. Leave it to us southerners to find a way to bread and fry ANYTHING. ha It is incredible this way too! Now before someone says it, I know none of my ways are very healthy and sort of undermine the whole point of fresh green veggies! ha BUT man is it good.

Sometimes I do just steam and sprinkle a little salt, and they are still good that way as well. I don’t think there is a bad way to prepare them.

@SMC_zone6 I only have a few purple ones, but there is absolutely no doubt at all to me- the purple ones are the best ones. They have a natural sweetness that makes them out of this world! You are a lucky man.

@k8tpayaso I’d forgotten that you started a patch 2 years ago! As usual, your warmer weather puts you ahead of me, but not by as much as the jujubes. Sounds like my patch started sending up spears just about 3-4 weeks after yours. Be sure and not over-harvest your two-year old TOO much. I have no idea how to define how much that is, but I’ve experimented quite a bit and I find that picking SOME is actually better than picking none, but picking until they only send up little thin sticks is too much and results in smaller full size plants in the summer as well as lower yield the following year. SO I tend to err or harvesting to little (ie too short a time) than too much. Hopefully you’ll find just the right amount. But aren’t they great?

It’s also fun to get something from the garden- something REALLY GOOD- so incredibly early. mmmm. Can y’all tell I love asparagus! ha

I also put Parmesan cheese on mine.

I’m kind of surprised the 'Gus is up enough for our first harvest of the season, given the awful weather we’ve had in the not to distant past…

I just harvested these and my wife just came home from the store. I was telling her what you’d said about the Parmesan Cheese, and she’s like “…I bought some today, it’s still in the car”. 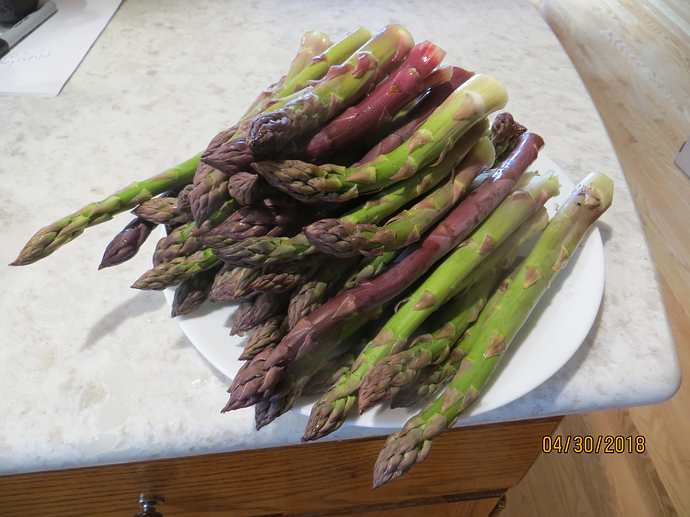 your wife is a genius.

You won’t be disappointed! do you enjoy your purple ones more too?