Yeah, me too. And it looks like it’s that way for a lot of the older posts, which is too bad. I don’t have any suggestions. Wish I were good enough to replicated it for you, but I’m not and am not likely to be!

Only that I will try to take pictures to replace them!

Thank you- that would be terrific.

I think it’s Konrad that needs to update his Photobucket account,by paying them something like $300-$400 a year.
I chose not to and any place outside of PB on the net,that my pictures are stored and displayed,they want the paid upgrade done. Brady

I hope I don’t get in trouble for doing this…

Finally!..I have some pictures together and should be self-explanatory.

Why is it different you might ask,…there are two angles cut instead of one.

For two reasons, first, I find it will match better, therefore a better take.

Second, creating a kind of well, where the sealant can run down the slope and making a better seal. 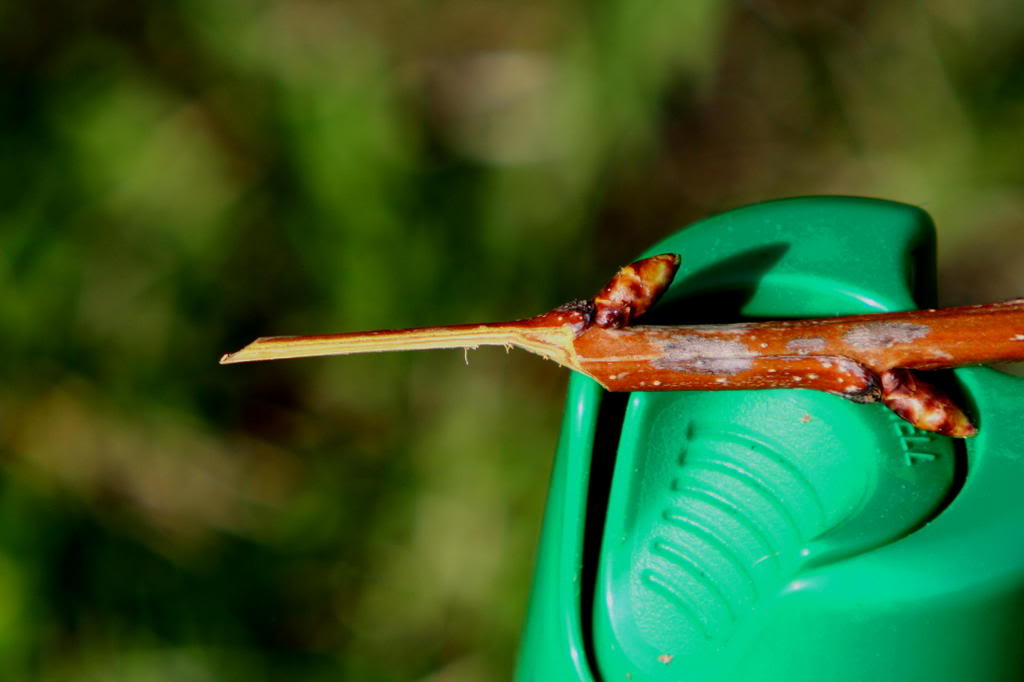 Cutting the root stock, note: after the two angle cut, another vetical cut, here, it’s going down to

the bottom of picture. 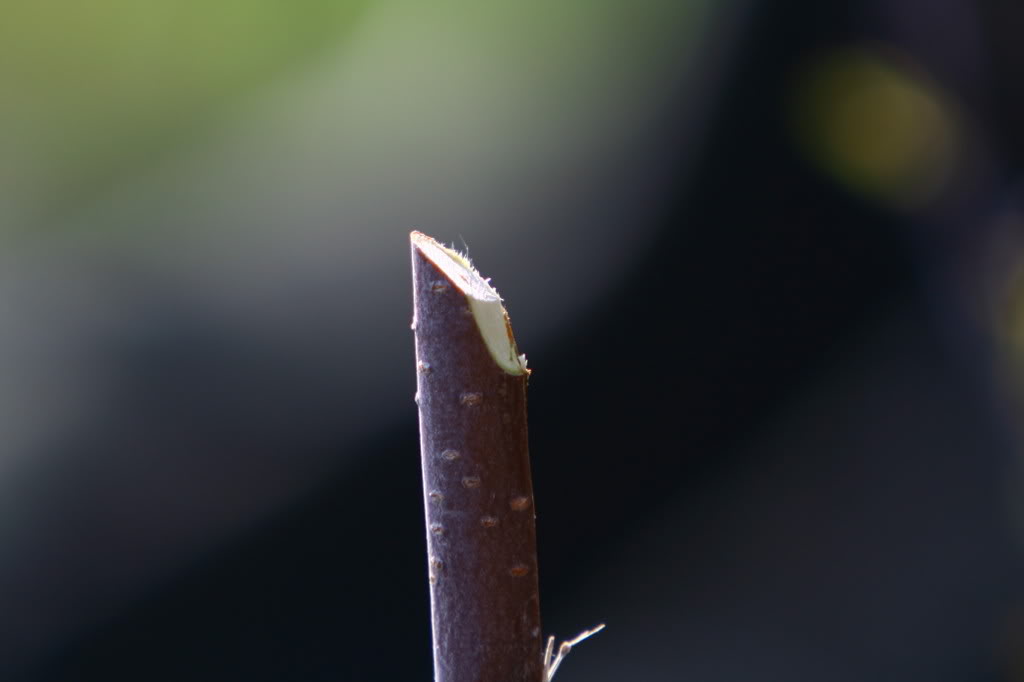 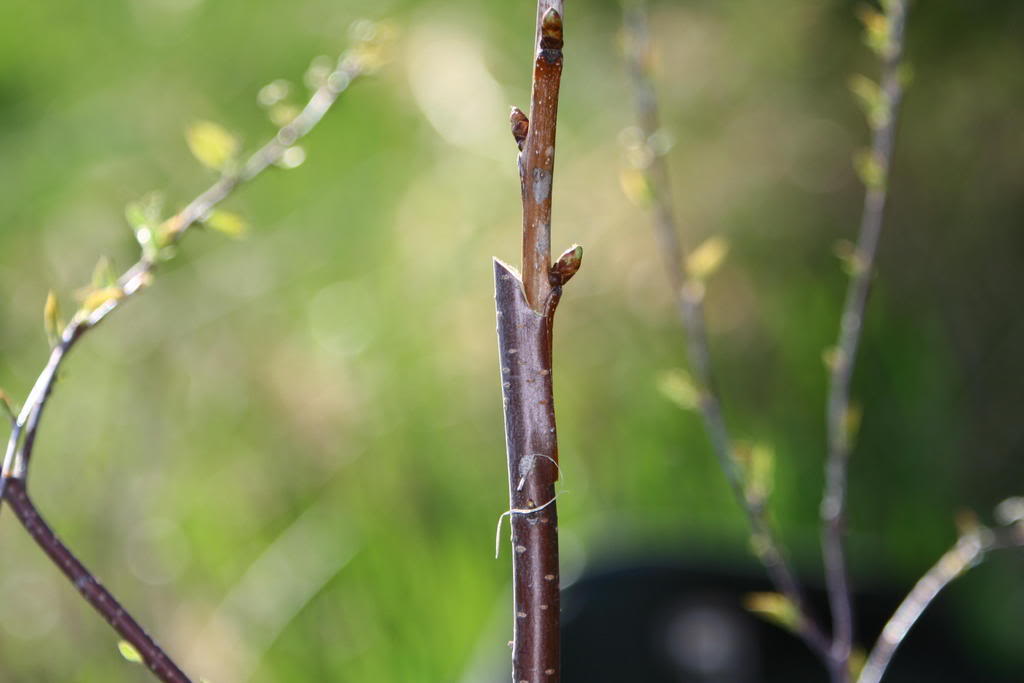 Note: The top angle cut, perhaps a little too much angle,… is helping tying the graft and helping for the sealant to run down 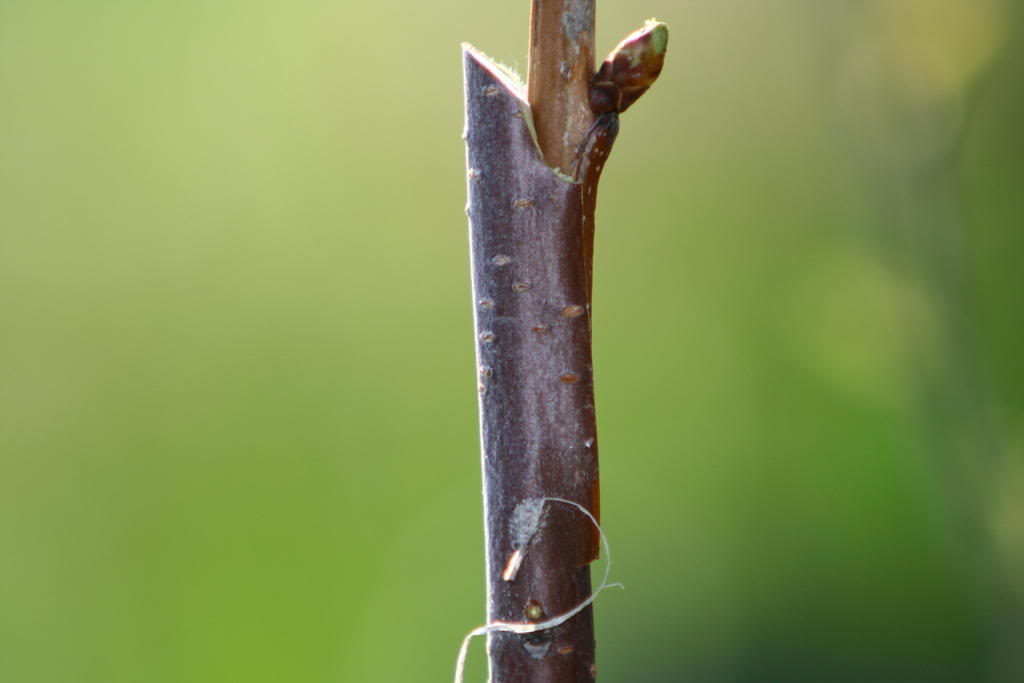 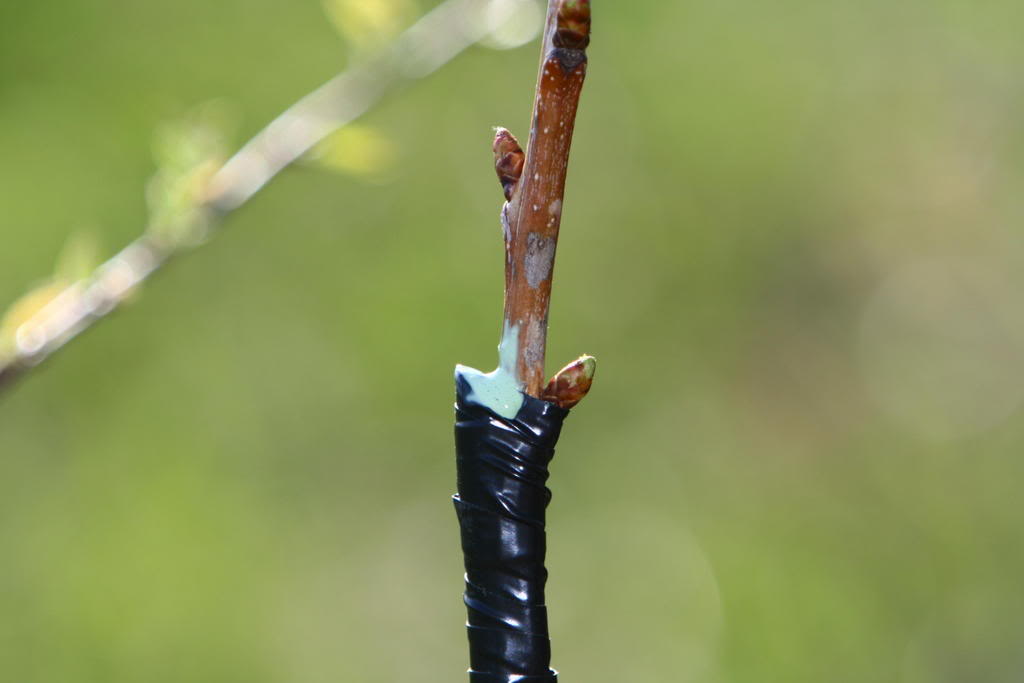 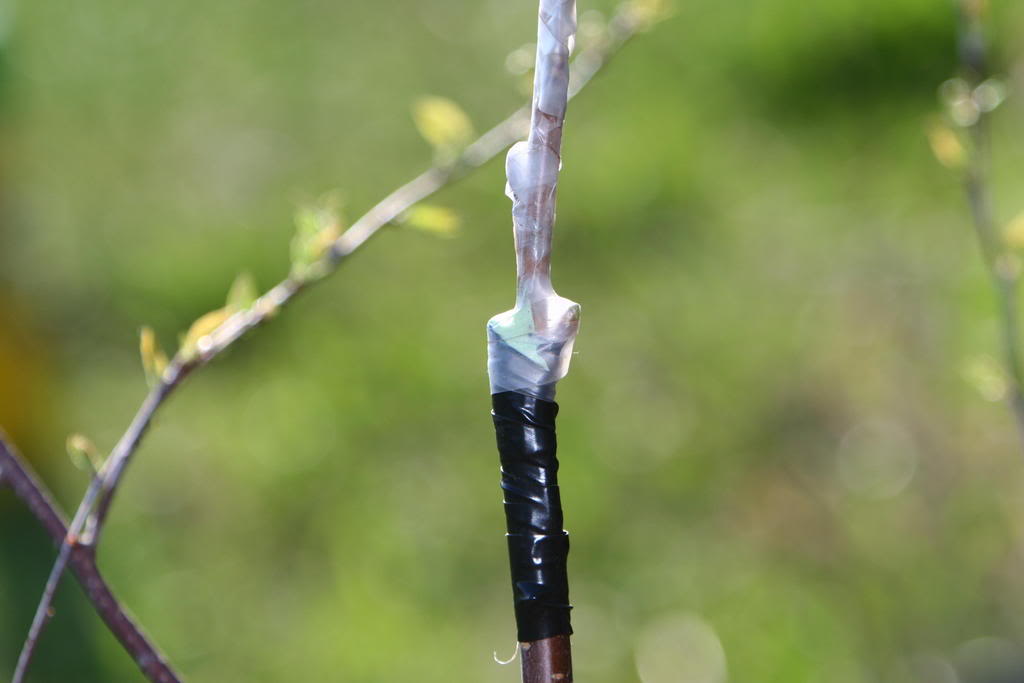 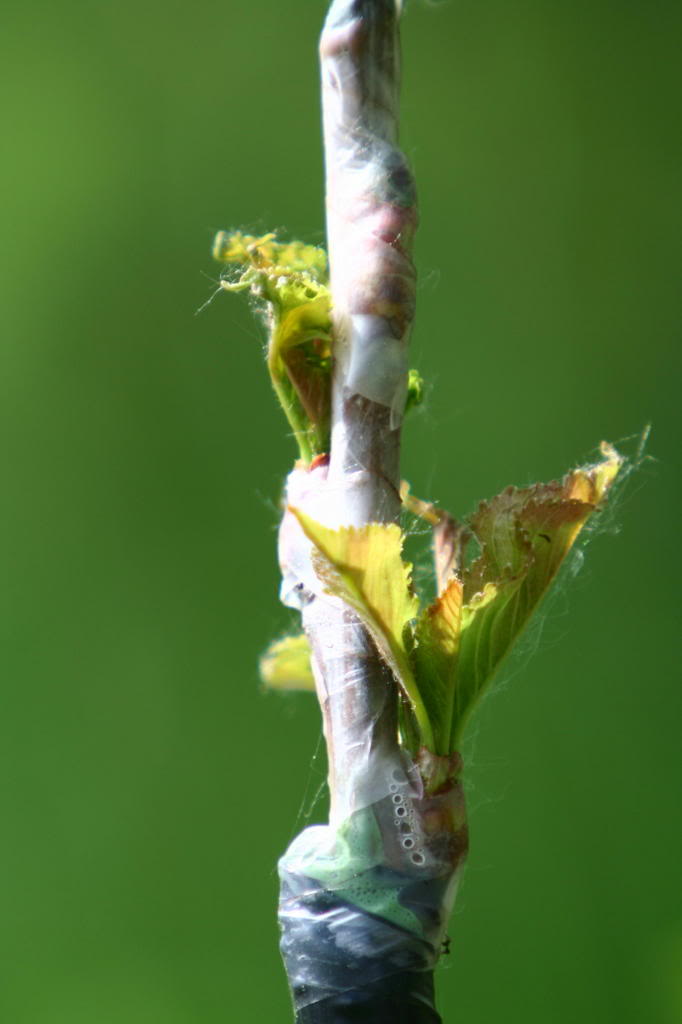 This graft is one year old…from another graft. 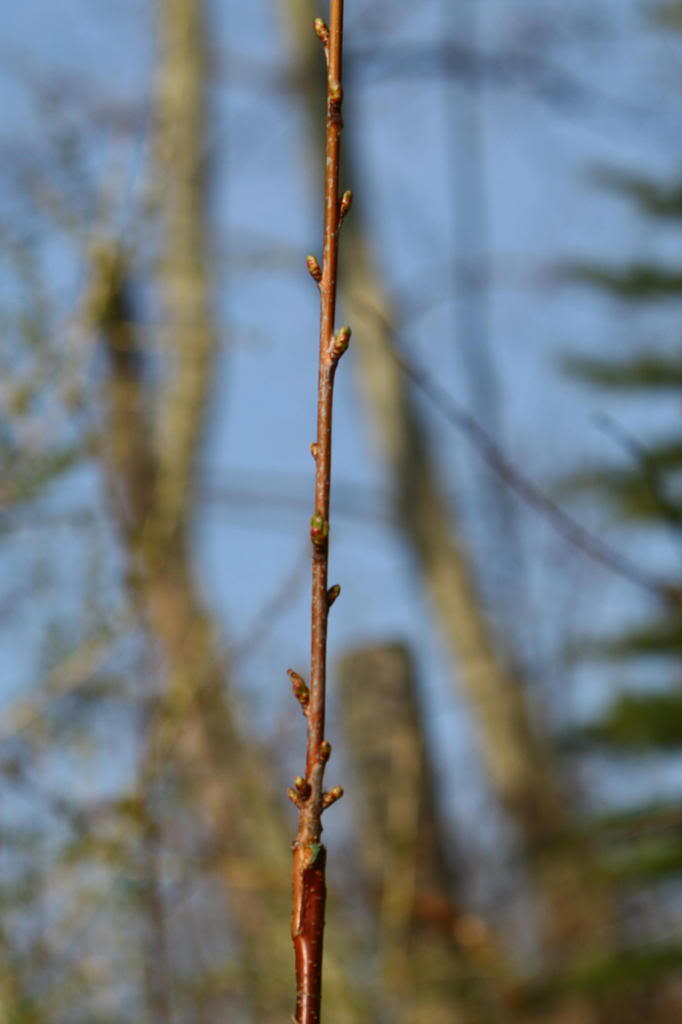 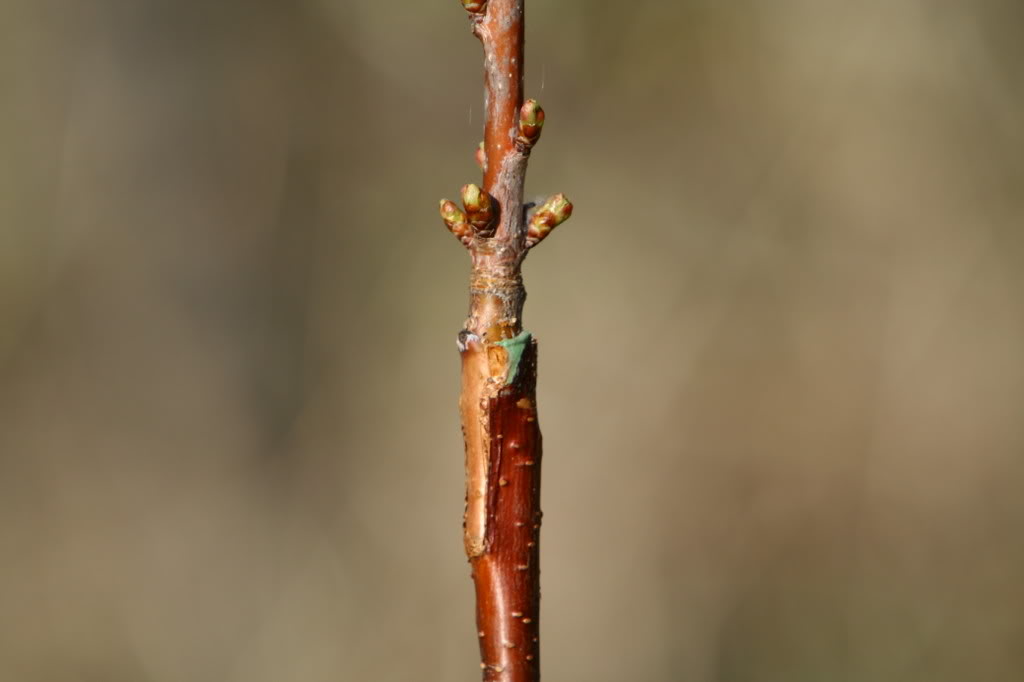 I dont get the Konrad modified bark graft, seems not a bark graft for me as the scionwood is never inserted under the bark of the rootstock ?

My favorite grafting technique is the “pendule graft”, that mixes some techniques of other grafting methods 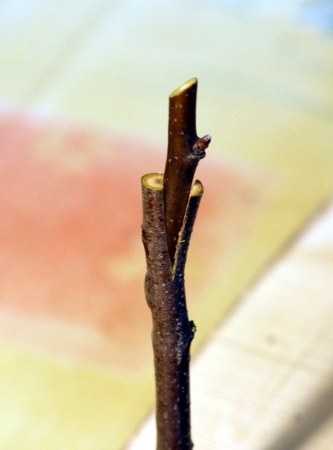 Here’s the translation for that link:

I wanted to introduce a transplant method that I use regularly and that I consider almost universal. I gave him my name on the graft.net website.

The origin of this transplant dates back to visualisations of videos showing the usual ways to transplant in the Asian countries, particularly promoted in the advertising clip of the “buddy tape” and of which we find multiple equivalent videos on the internet (links at the end of the article ). Having realized well after viewing these videos and no longer have a fresh memory of how to proceed, I have developed by accident this variant that gives me great satisfaction.

This graft is a mixture of Asian graft (in the spirit, but more aesthetic), cleft, crown, chip budding, English galloping, etc.

It is important to wrap the base of the graft so that you do not let in air or water and cover the end of the graft.

It is also possible to cut the bevel of the graft on the side of the eye in order to refocus it in the axis of the rootstock.
Advantages of this method:

Cambium of the graft represented in green, that of the PG in orange

Here are translations for the photograph captions:

Here’s how to perform this transplant (tabletop simulation).

1- Decapitate the rootstock and clean the wound

2- Cut of the graft (one eye is enough, but you can keep several if you want it)

2a - realization of a classic bevel type “simple English graft”
2b - on the opposite side, cutting of the tip of the bevel at 45 ° (this step is optional as to the recovery of the graft, it is only intended to facilitate mechanical insertion)
The finished graft preparation:
3 - the vertical incision of the rootstock to form a tongue:
4- graft insertion:
5- ligating with only buddy-tape
It is important to wrap the base of the graft so that you do not let in air or water and cover the end of the graft.

Possibility of also cutting the bevel graft side eye to refocus in the axis of the rootstock.

Yes it is, there’s only contact under the flaps of bark along the side of the scion. His version lets you match very different sized wood. I didn’t realize someone was going to be able to pull his pictures over, so I went out and shot my own showing how I personally topworked my peaches with his method. 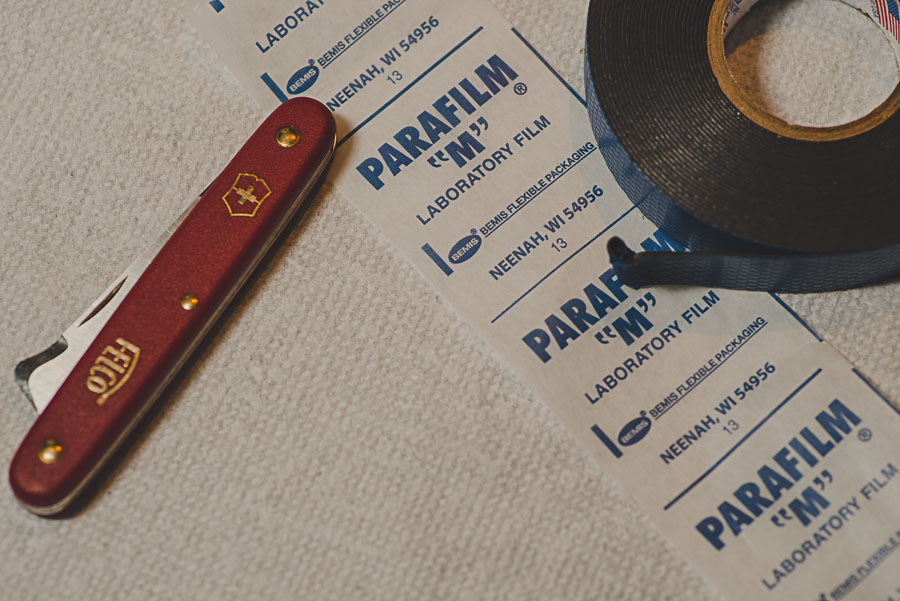 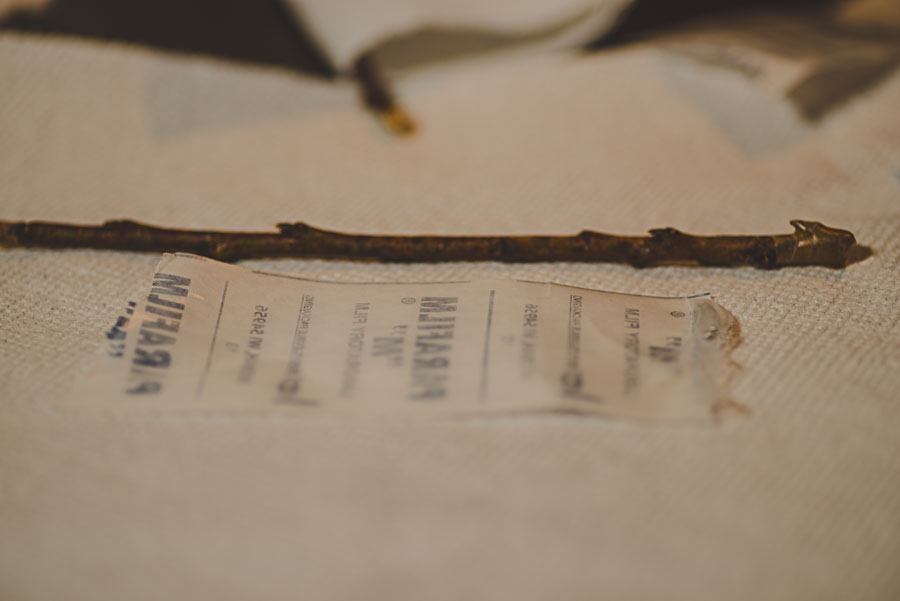 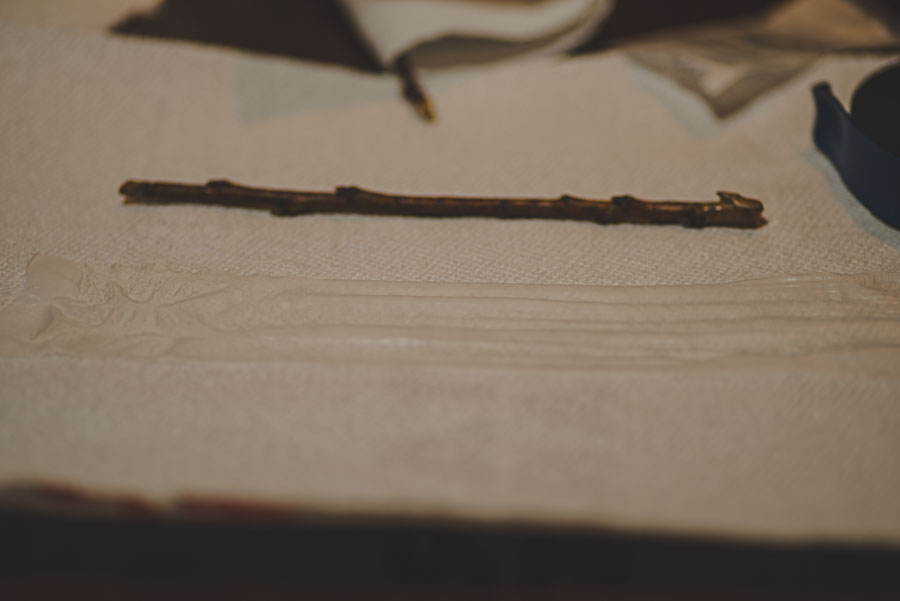 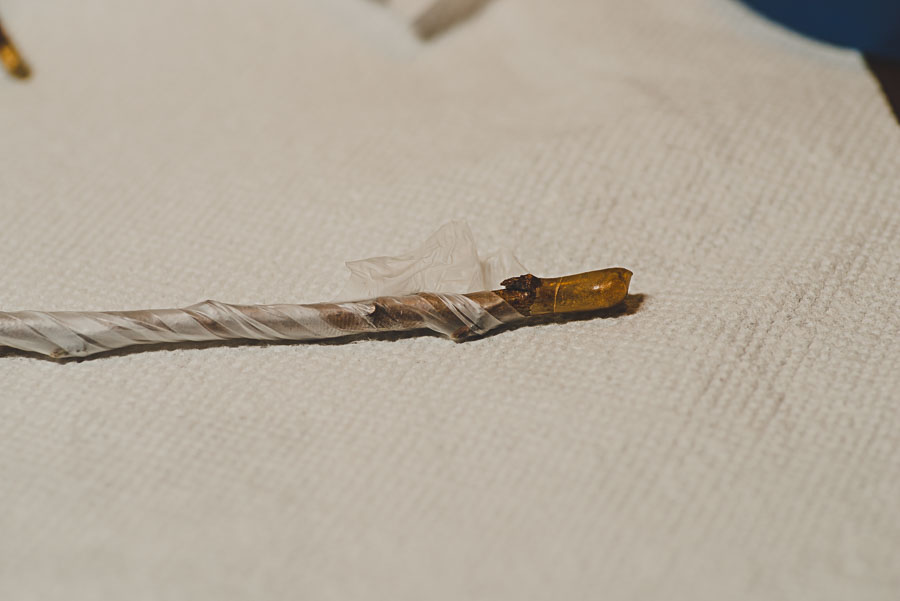 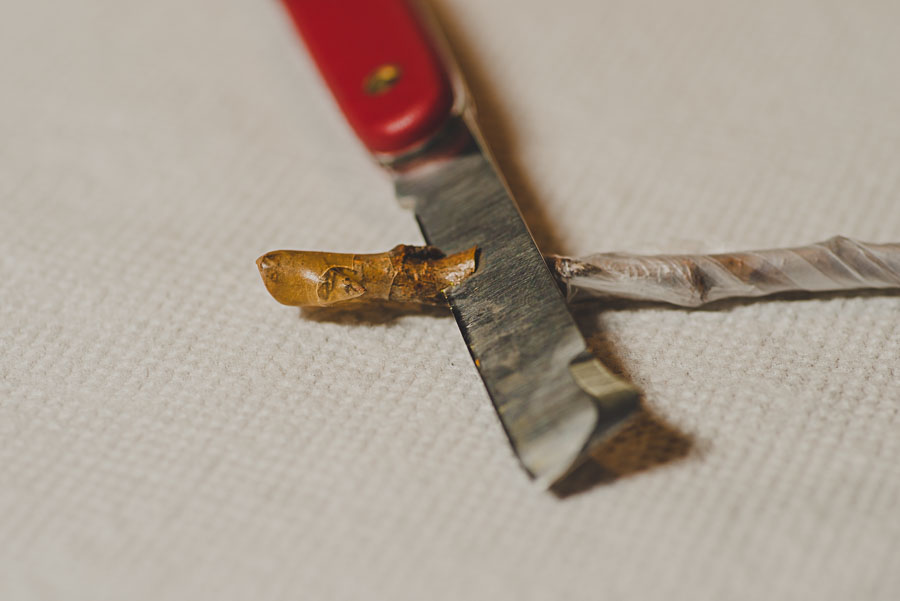 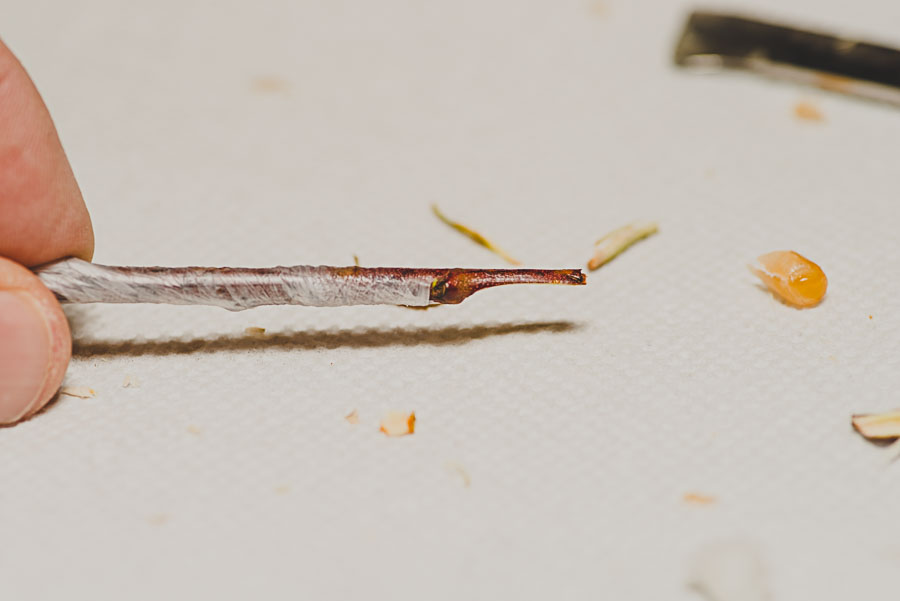 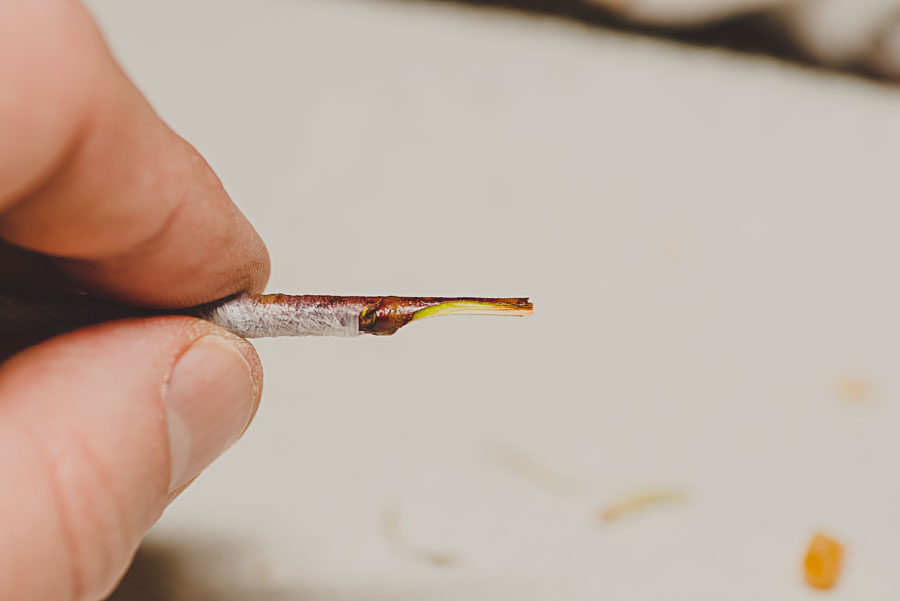 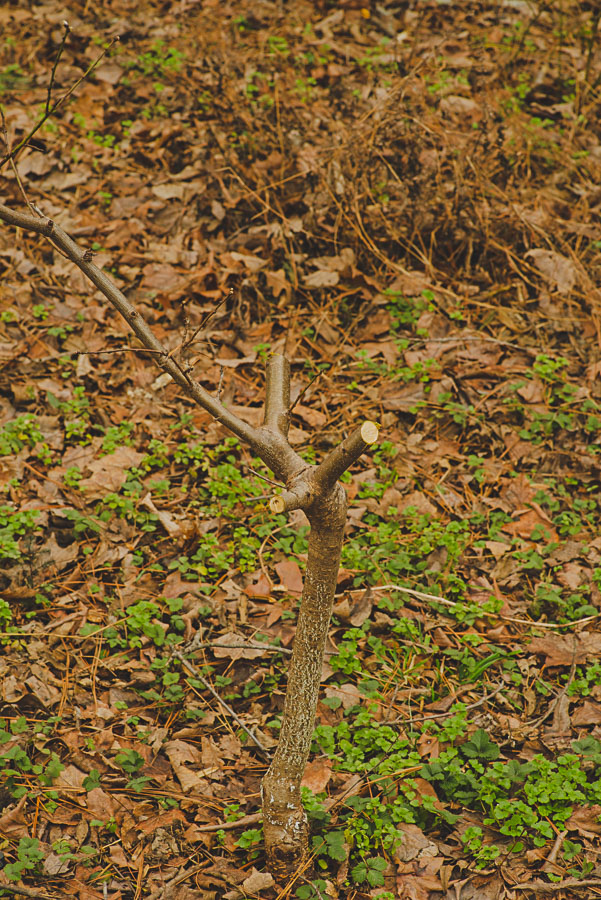 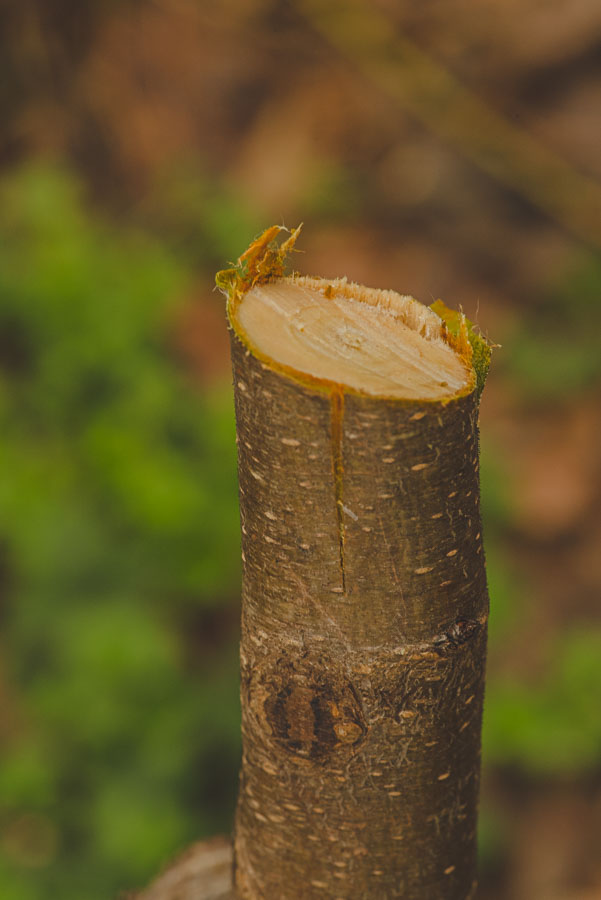 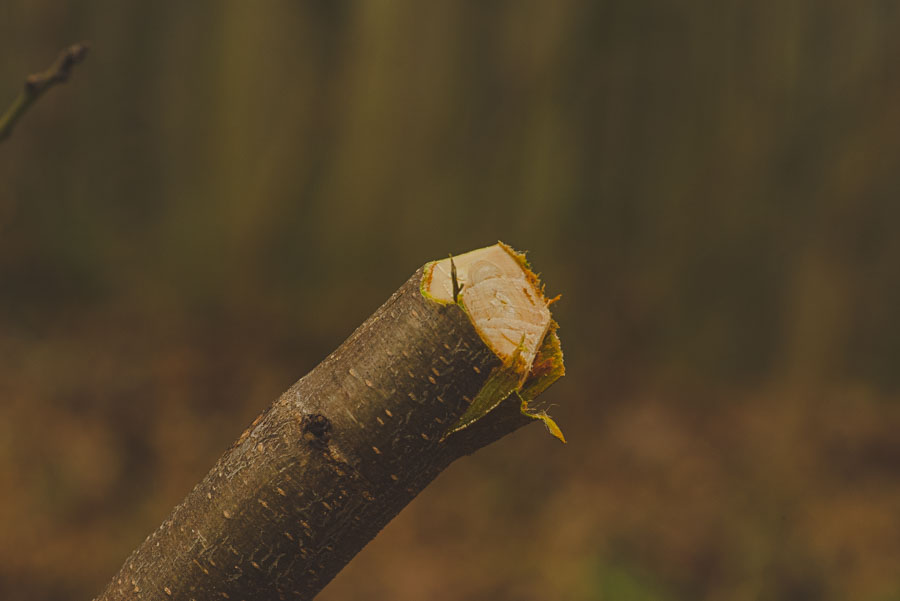 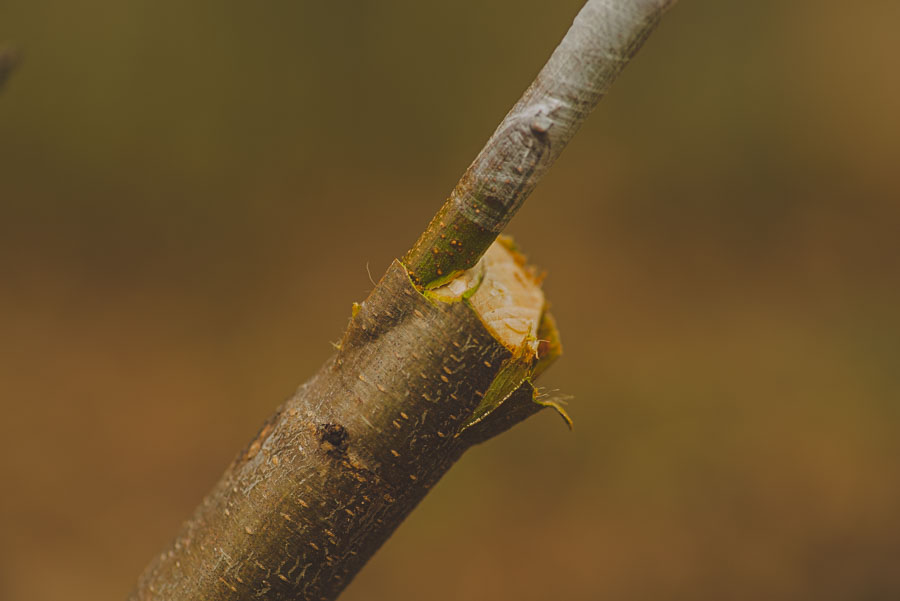 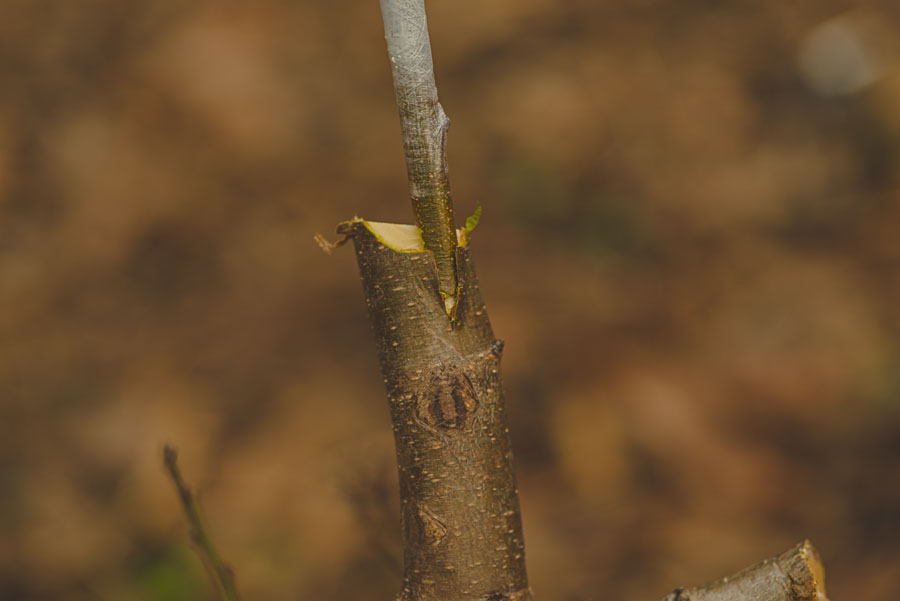 Two methods of wrapping. This is what I do in hot southern weather that doesn’t need much heat from the tape to heal: 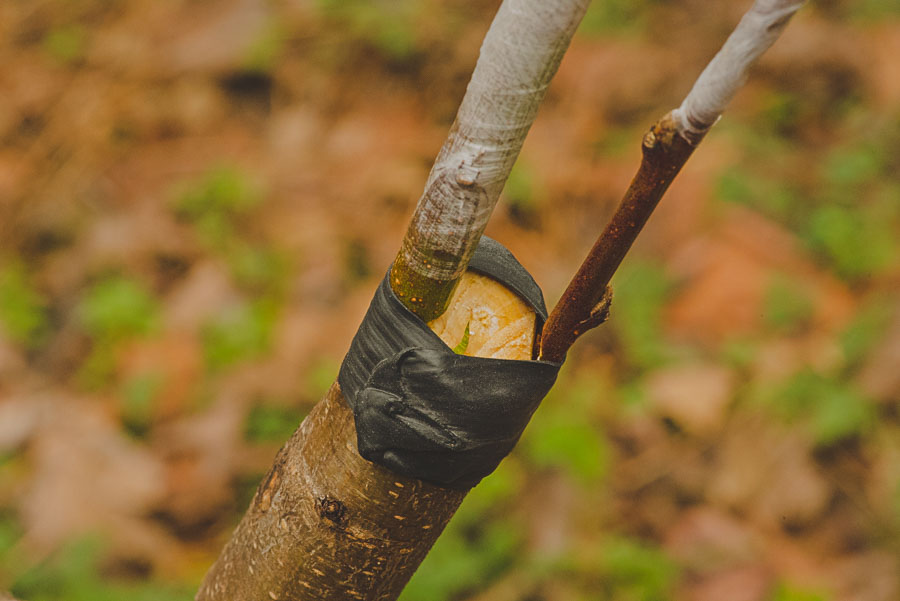 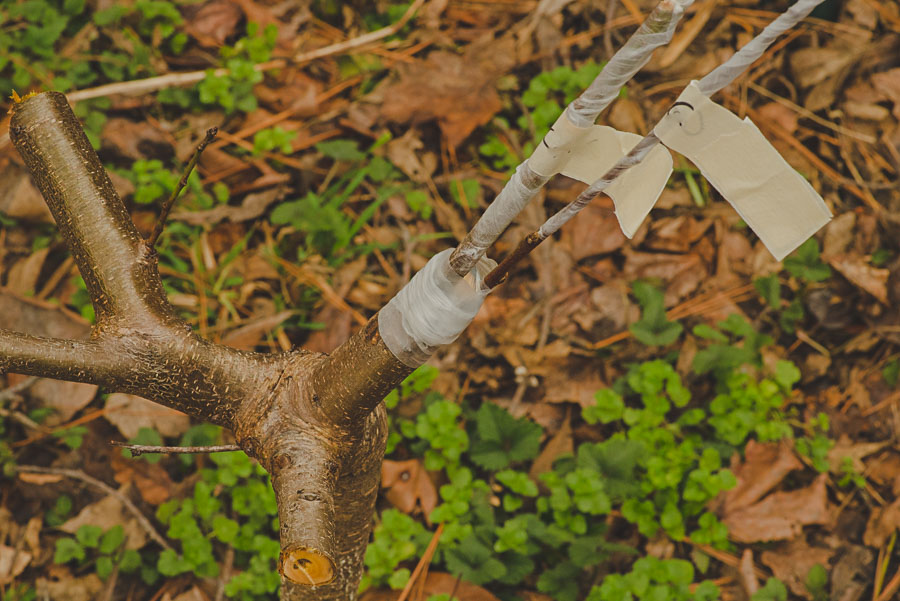 In cooler climates, it’s my understanding you may want to leave the black rubber exposed and fully seal it: 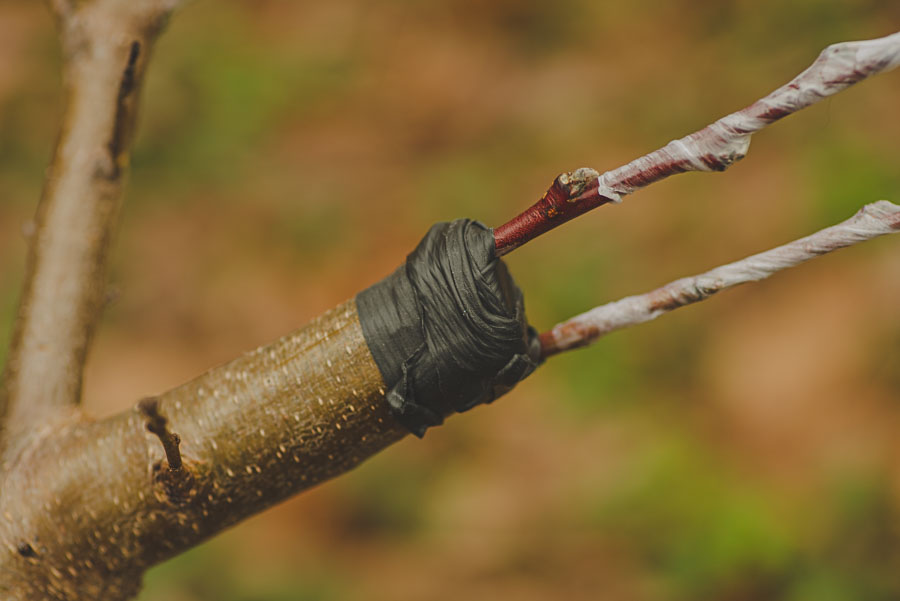 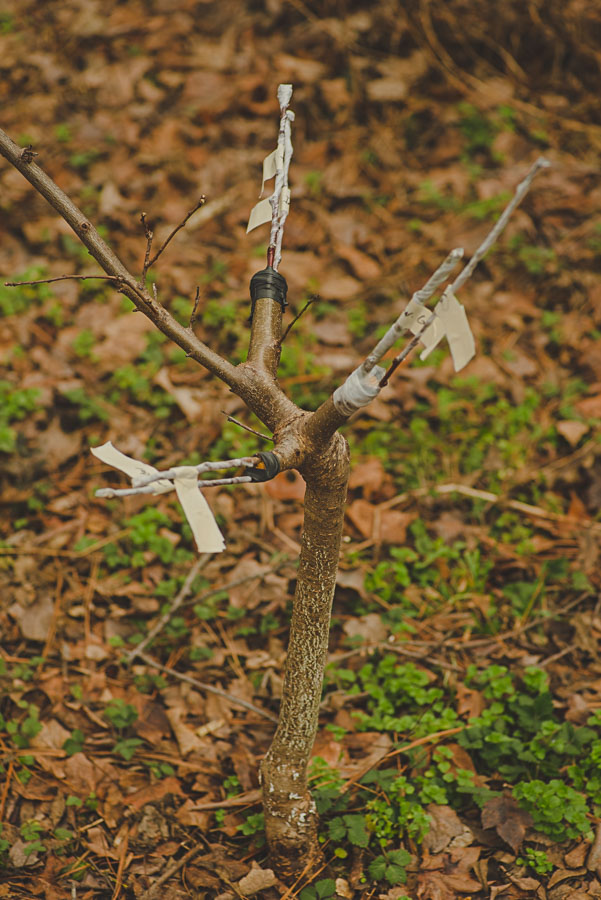 I use the CD in the field as well. (or a piece of cardboard if the CD is too small)