My plums are setting like that this year and peaches.

I have been picking my NJ cots, Ilona NJ139 and NJ105. They are excellent! I hope they release one of these last two as they are just as good as Ilona and are a bit earlier.

I don’t think we had quite as much rain as you have. We did have a lot a few days ago which watered down things a bit.

My Tomcot tree has been unproductive for several years here, it got borers and even though it is back to growing well it is not producing much. I may just take it out and let the neighboring cots have more room.

Here are a few I picked yesterday: 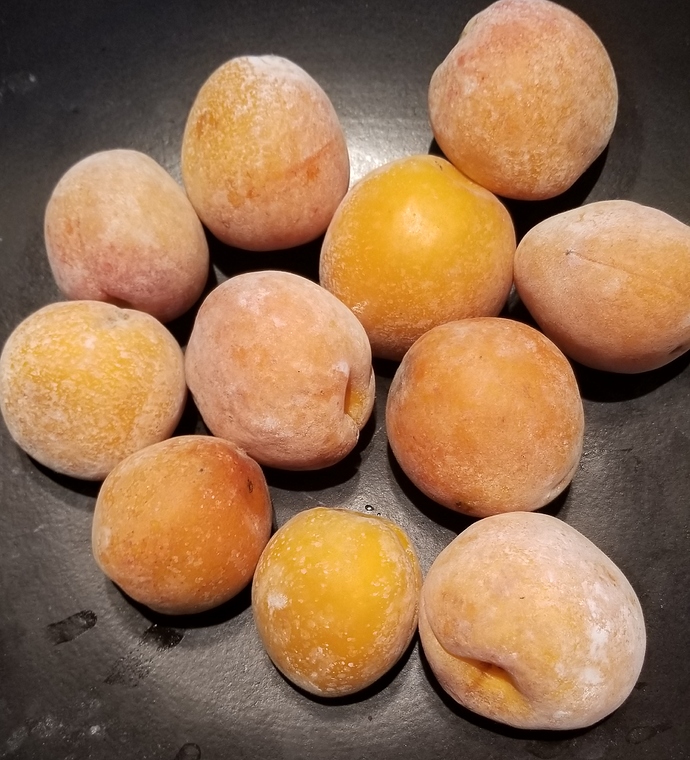 The Surround is still hanging on as you can see.

Are you going to make a duplicate of it before removal?

I hope they release one of these last two as they are just as good as Ilona and are a bit earlier.

Yes, I’d love to try one of them. Rutgers releases usually work well for me. Their selections are probably generally more compatible to S. NY then Cornell releases, although both programs have created some useful varieties for my area.

They are experimental and I got on the program via the NAFEX Apricot AIG. I had to sign a non-propagation agreement so no scions available unfortunately… I usually don’t mention much about them since they can’t be shared.

In any case Ilona and Orangered are just as good, just later. I am now done with 105/139 and the other two are nearly all still on the tree.

Thanks. Hopefully, they will be released sooner than later.

Are you going to make a duplicate of it before removal?

Good question, I’m not sure now. It is similar in timing to these NJ cots which are big vigorous trees now. I’m sure I will at least have a limb somewhere as it is too good to completely get rid of. Tomcot has this dry-rich flavor that the NJ cots don’t have at all.

Your cots are about 3 weeks ahead of mine. Mine ripened around July12-15 last year.

Besides, pests and diseases, this year I have to add rain to the list of “things that can ruin my cots.”

Today I picked another two Tomcots, and they were very good (8/10); no brix, too precious to waste on brix measurements… They were not dry though, all the rain made them juicy, but I loved the flavor… definitely a keeper, my only regret is that I planted the tree last year and not before…

@scottfsmith when did you begin picking your NJ105 and 139? Are they earlier than Early Blush? Tastier?

@alan Did Cornell breed/release any cots?

@scottfsmith when did you begin picking your NJ105 and 139? Are they earlier than Early Blush? Tastier?

My EB graft died a few years ago so I don’t have any direct comparison but my memory is EB was still earlier. EB is “very good” on the taste scale, the NJ ones are more at “great”. I tried to re-graft EB for several years, I was trying to put it on my Robada but the trunk kept sprouting buds like crazy and did in the graft.

Did Cornell breed/release any cots?

Not that I know of. I was speaking of stonefruit in general.

Now I know why the Blenheim is also called Royal! Started picking it yesterday, after heavy rain on Sat, most the ones I picked were knocked off by the storm and were not necessarily the most ripe ones, they were good but not special. Today, I picked twenty six of the real ripe, starting to wilt ones. Ate about ten, the brix of four was measured and was 12, 19, 22.5 and 25… Now, too bad there is no quantitative measurement for how good the flavor is, however, qualitatively these were easily fantastic! Even the 12 brix one was not bad, definitely a lot better than a 12 brix peach, the latter would be directly tossed in the garbage can. 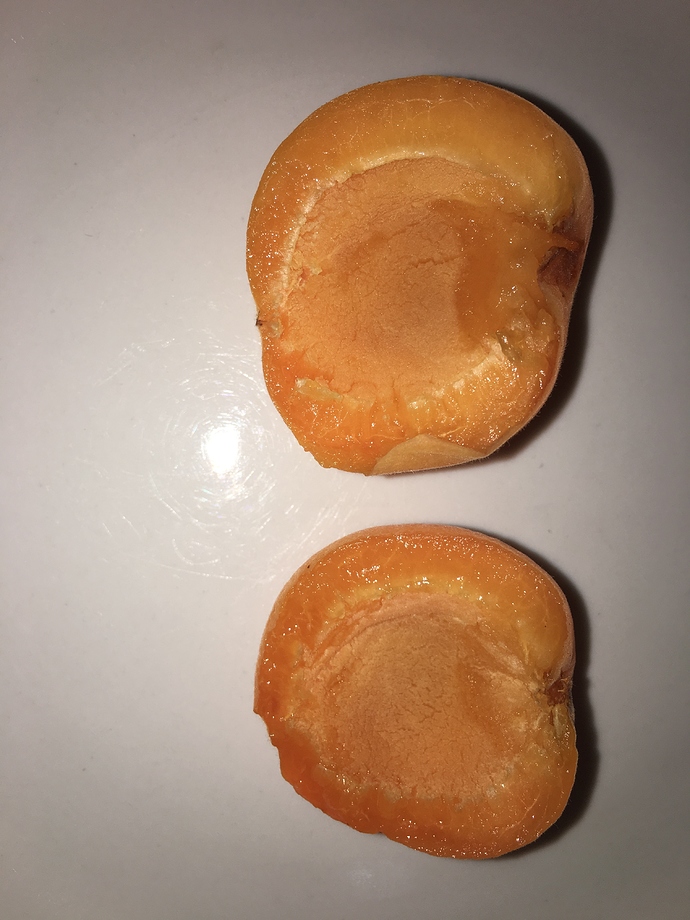 When I finished picking today, I planned to give a few gifts from them to our neighbors, but after tasting them with my daughter, she told me “that’s not a good idea, let them grow their own fruit trees”

Now I know why the Blenheim is also called Royal

Historically, Blenheim and Royal are two distinct but similar varieties, both are believed to be seedlings of Pêche de Nancy. Since they’re similar, they have been confused with each other and interchanged multiple types in the California nursery trade in late 19th and early 20th century. Due to all the confusion growers and nurserymen did not know anymore which one was Blenheim and which one Royal, so the two names are often used interchangeably.

David Karp writes: “In the late 19th century Royal and Blenheim were grown as distinct varieties, but by 1920 they were sold indiscriminately by many California nurseries, and today many farmers call them both Royal Blenheim. Blenheim is a bit larger and has a rounder stone, while the Royal is slightly flattened, almost wedge-shaped.”

The Blenheim apricot (also known as Shipley’s) was raised circa 1830 by Miss Shipley, the daughter of a former gardener to the Duke of Marlborough, at the gardens of Blenheim Palace, Oxfordshire, England.

The Royal apricot was sent to Michel Harrey, director of Luxemburg Gardens in Paris, in 1808, but the name “Royal” was given only after the restoration of monarchy in France, in 1815, in honor of the king Louis XVIII.

Thanks for the information Stan, it is great to have such knowledgeable person in this forum… Now I understand why Dave Wilson lists both Blenheim and Royal as two different varieties… (I hope they are able to distinguish between both varieties though, they have identical description for both of them).

Congrats on getting good fruit off Blenheim in the east. There were a great many people having problems with it in the east so I never even tried it. I did grow the parent, Peche de Nancy, and it did horribly with cracking and rotting.

I have been harvesting my Shalah, Lasgerdi Mashaad, and Orangered recently. Plus a few Moniqui. All are excellent! I need to get more room for the white cots, they don’t set a whole lot and I now have them really close to each other so I don’t get many fruits. The Stark Sweetheart next to them is probably going to have to go, it seems fine flavor but nothing special so far. They are too small.

I got a few cracked ones, probably about 10, on a tree that have 200-300 fruits, in my opinion that’s not bad at all given the amount of rain that we got in June. Rotting wise, probably about ten too, but these were mostly smaller size, inferior fruits (which should have been thinned early on) that stopped growing and started wilting and gone unnoticed by me due to bagging. So they fell off inside the Clemson bags and stayed there for a few days in a high eighties/low nineties temperature— no wonder they rotted.

Disclaimers: my tree is planted in a raised bed, so that might have helped with cracking and brix, and I sprayed fungicides (on April 13, 30, May 18 and June 7), which probably helped with rot.

Ahmad,
You bagged all of them with Clemson bags? My hat off to you.

I read that you used Clemson bags so I went out and bagged a few apricots with them but stopped shortly after. I think apricots and plums are too small to be worth Clemson bags.