Thanks for the correction Tippy. I didn’t know they suckered. I have some where I intentionally planted seeds below them and the seeds came up, so I thought they were all seeds. Based on your experience and the experience of Vicky, I’m wondering of some of them are suckers.

I’ve tried to plant seeds in forested areas and can’t get the seeds to come up. I think the difference is that below the established pawpaws, there was very little grass, whereas in the forested areas where I’ve tried to establish them, there is lots of fescue under the trees. Fescue is so competitive, it can be difficult to establish other desirable plants among it.

Here the sucker, from two angles. 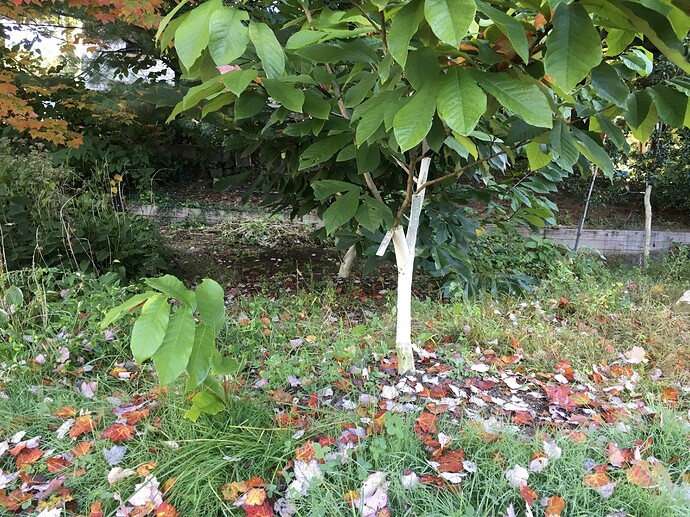 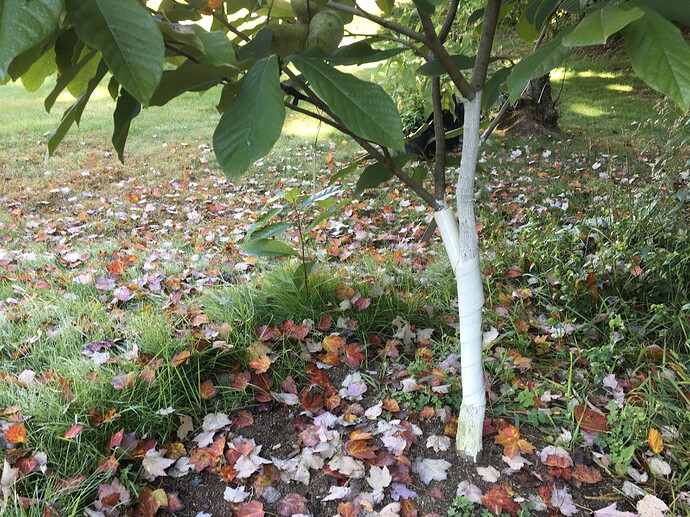 I tried replying via email to mamuang’s message, and attaching a couple of pictures, but I got an error msg, instead.
I was trying to show my two oldest Paw Paw trees. The largest has an 8" diameter trunk, and I now think is well over 20’ tall. Maybe 25’/30’.
I also have a picture of the density of the suckers/seedlings under the smaller tree, which I haven’t cleared-out, yet.
Most of them are absolutely suckers, and they grow very fast. I didn’t notice one coming up inside my overgrown hedge. It now has a 4" trunk, and is at least 15’ tall. I’m having a heck of a time removing it, without damaging the hedge.
My property came with a huge Sassafras tree in the back, that has forever been sending suckers all over. Some cherry trees acquired a few years ago, are starting to do the same. I had assumed this was normal. Could it be my soil, along with my climate?
I’d really like to show you people some pictures. I’m currently doing everything with android phones. Can someone tell me how to attach the pictures from my phones?
Thanks!

Can someone tell me how to attach the pictures from my phones?
Thanks!

Perhaps this will be helpful to you. About halfway down in the FAQS are instructions on posting pics.

Here we try to answer some frequently asked questions. DOES IT COST MONEY TO REGISTER ON THE FRUIT FORUM? DOES GROWINGFRUIT.ORG USE ANY TRACKERS OR ADWARE? WHAT’S UP WITH THE LITTLE COLORED CIRCLES BY MY AVATAR/ICON IN THE UPPER RIGHT CORNER? HOW DO I SCROLL FASTER FOR LONG THREADS? HOW DO I USE THE SEARCH FUNCTION? HOW DO I FIND OTHER CATEGORIES? HOW DO I CREATE A THREAD/TOPIC? HOW DO I POST PICTURES? HOW DO I SEND ANOTHER MEMBER A PRIVATE MESSAGE? HOW DO I CHANGE MY VIEWING …

If you try the method in the FAQS and are still having trouble, you might look at the file size of the pics. I think the Discourse program is supposed to resize the pic, if the file is too large. But maybe there is an issue with that. If the file size of your pics are really big, you might try resizing them to a smaller file before uploading. Sorry you are having this trouble. 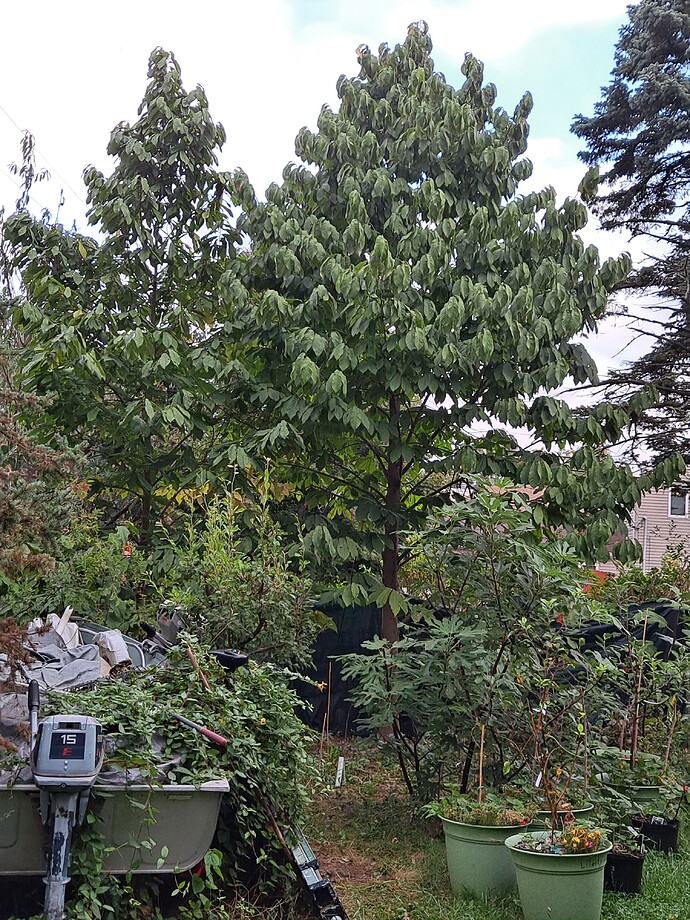 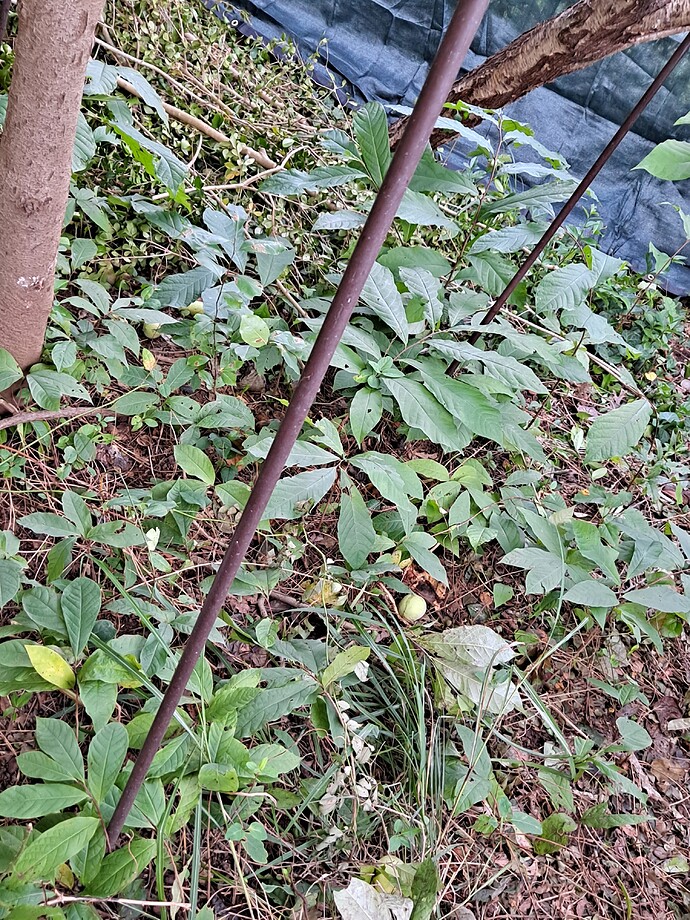 That is one huge cultivated pawpaw tree.

My mature pawpaws are like that too. I took it down to 15’ and trimmed limbs back a bit to maintain a christmas tree like shape. Suckers pop and seedlings pop up everywhere once the pawpaw hits maturity. I think I started noticing them more after the 10th year.

Thanks for the correction Tippy. I didn’t know they suckered. I have some where I intentionally planted seeds below them and the seeds came up, so I thought they were all seeds.

I thought mine were all seedlings too until I started to dig them up and move them. Nine out of ten were suckers. Some of the suckers were 6 feet and probably 1" trunks when I moved them. I think once pawpaws get mature they have a stronger tendency to throw out suckers since they have no longer any need to invest into vertical growth of the main tree. I guess this is how colonal patches get started.

Yes. So as I said at the outset, they are not the best choice for a deer fence, unless you eventually want a thick forest to keep the deer away.

I’ve decided to not cut down the two trees in the picture, at least for now. They are on the north side of the property, so not blocking any sun. I just have to keep on top of cutting down the intruders.
But, my PawPaw trees in the back of my property, have to go. They include the varieties “Canada’s Best” and “Taytoo”. It’s sad, but they’re just too much. I originally planted them to provide food for the caterpillars of Zebra Swallowtails. One book I read said they came this far north. I doubt that was accurate, but with the climate warming up, I thought there was a chance they would establish here (south side of Long Island, NY). I was buying chrysalises from a senior gentleman in VA, but I’ve lost touch with him. I had no-see-um netting over the (then smallish) trees, to keep away predators. You can still see one of the copper pipes in one of the pictures, that supported the netting. The butterflies did seem to lay eggs on the leaves, but they disappeared (earwigs?). Now, there’s no way I’m netting-in the trees.
By the way, I’ve recently dug up an “Autumn Golden Star” Chinese Haw, cut it down to about 5’, and cut the roots to fit in a 10" pot. It’s already sprouting new growth. I was planning to do the same with “Gold” Azarole. (I want room for other trees.) I thought I would put them on Craigslist, for a few dollars. Is that the best way to find good homes for them? Am I supposed to open up a new thread to ask this question? (I don’t know if I will have problems with that.)

FaceBook Market Place is what my friend suggests. She said you will get a wider range of potential buyers there.