That is what I did…right after petal fall I sprayed and then bagged and left it on until harvest. One of the neat side effect of the bags is that the fruit looks very different from those exposed to sun. I’d say it would vary from one variety to the next, but the peaches I bagged were much more yellow than others on the tree, and were exactly the same color all over instead of the red blushing that varies on other peaches depending on where the sun hit them. In fact, I saw a you tube video showing that in japan they bag peaches specifically for its effect on appearance. These uniformly, lighter colored peaches fetch a very high price in the famous high-end Japanese fruit market.

Just went out and bagged peaches with Clemson peach bags. Boy, what a task!!!

It is difficult to apply the bags properly. Many peaches are not in a location that is easy to bag, often leaves are in the way. Worse, the wrapping of a twist tie on top of the bag is very difficult. I am not sure if part of the difficulty is because I am a lefty.

I gave up after 10+ Clemson bags and used my own bread bags to bag peaches. It is a lot easier and faster.

Yeah I found it a lot of work too. I had to do it in two or three sittings as I lost patiens after a few hours. But I think the commercial farmers here do it a little differently. I was trying to maximize the yield on my tree, so I bagged about maybe 5%. They often cut most limbs and, only keep a few fruit towards the end and underside of the branch.
Here’s a few bags I’ve tried on my peaches and grapes. The orange bag is specifically made for peaches, although I found the small grape bag next to it also worked very well. I found the type that had the V-notch in the middle, and most importantly an elongated metal tie that extends past the end of the bag to be the easiest to use. My tree is so overgrown and full of bugs that the hardest part was maneuvering without breaking the fruit off, I couldn’t see what I was doing half the time. It would be a lot easier if it was like the orchard trees. 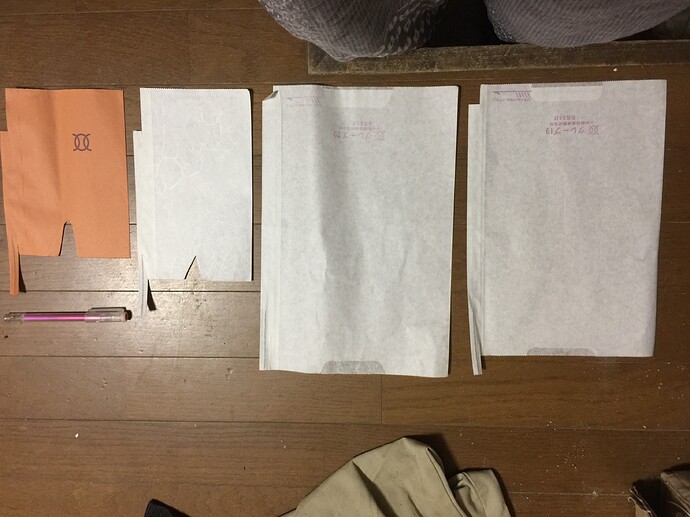 Clemson bags look similar to the second white bag from the left. I wish the twist tie is half an inch longer to wrap it full around the top of the bag when closed.

Can you cut the top of the bag to make it shorter and put the v cut in the middle to help with the branch? That would make your tie longer too. I just put some bags like the ones on the left on my Spice Zee. I need to bag my peach and nectarine trees yet too. The wasps like my nectarines and plums.

The top of the bag is the end with the V cut in the pic that TheNiceguy posted. Because te paper is made of a material similar to a wax paper ( used for baking cookies), it has some texture to it. A vedio shows how to fold and tie the top of the bag. It just harder to do than I realize.

My bad. It is the second bag from the left. If you watch Clemson video, you will get an idea how to put it on.

Yes, I watched it a while back. I purchased 100 bags when this thread started. Those are the ones I put on my spice zee. I still need to get them on the other trees. They do seem to have to much paper to for that wire tie.

I now wish I bought a few hundreads of these organza gift bags. So easy to use. Of course, I may regret it if they don’t work

I just put about 75 Clemson bags on. Yes, they can be a pain when there is a leaf cluster with the peach. I think sandwich bags would work for those ones better. I don’t like that you cant see the fruit unless you take the bag off. With a zip lock bag you can see if earwigs got in or if there is a problem.

I had 80 fruits on my harvester peach tree. My first havest - thanks Growingfruit.org! I attempted to put clemson bags on approximstely half of them. I spayed permethrin at petal fall and again 10 days later. I sprayed bonide infuse 10 days after petal fall. At that point the shuck had already split on a lot of the fruitlets. I began bagging at about 2 weeks after petal fall and thinned while i bagged over a week long period or so.

I checked each peach for larvae and brown rot at harvest. Here are the final numbers:

Bagged: 1/37 had second generation plum curculio larvae.
Nonbagged: 17/43 had 2nd gen pc larvae.
I saw one instance of brown rot and it was on an nonbagged fruit. I saw no damage from first gen pc larvae. The fruits with pc were still mostly edible after cutting out the bad parts. Id say only a 20% loss of flesh on average.

The other thing worth noting is about 20% of fruits regardless of bag treatment had flesh breakdown, but no rot, in a very small cylinder at the bottom tip of the fruit. Kind of like it got overripe way too soon in that area. Maybe something physiological?

I also have a flame prince peach tree treated exactly the same. It ripens in a few weeks so fruit are just starting to swell. I can see that unbagged fruits are getting hammered by pc and maybe stink bugs. My eyeball says it will be 100% of nonbagged ones, and its bad enough that they wont be edible. Not sure what is going on inside the bags because i have not taken the time to peek inside yet.

I just finished bagging all my peaches with Clemson bags.
Organza bags do not work because bugs can lay eggs through the bags. Plastic zip lock sandwich bags have ootebtial to cause rot.

I did some Clemson bags in the past with excellent success. At the time, I did not thin them well and putting bags on was quite difficult.

This year, I thinned like mad, 4 rounds from tiny fruitlets to a thumb size or larger. I found that spacing fruit far apart and leave only fruit on twigs or branches that are in a good position to bag is very helpful.

My bagging skill have greatly improve because of the fruit space and positioning.

I have two full grown peach trees, one small 2 year old peach and one small nectarine tree. Took me a couple of hours a day for about 4 days to finish bagging about 600 fruit. (Estimated from bags used).

Most of my peaches are Sept peaches so it will take a while to find out. My nectarine should ripen by August. I hope the result will be as good as it was in the past.

Another update on clemson bags…
Two out of about 50 bagged fruit had pc larvae on my flame prince peach tree. 49 of 50 nonbagged fruit had larvae. Unfortunately the flame prince ripened very uneven and around a third were turning mealy around the pit but still almost crunchy on the outside. Also had some corking in the flesh. Could that be due to a nutrient deficiency or is that variety prone to that sort of thing?

The Clemson bags kept the bugs off of the peaches but most of them had brown rot. Possibly because of the high humidity in my area. The unbagged peaches didn’t have brown rot since I used an organic spray to keep brown rot under control. Since I still have bags I may bag the peaches early in the season and then remove them a few weeks before ripening.

What is your organic fungicide spray against brown rot?

Before putting on Clemson bags, it is recommended that one sprays fungicide and insecticide a day before bagging.
My problem was I did not have time to bag all peaches in a day.

It took me 3 -4 days to finish. Turned out quite a few peaches have bugs in them. They must have sneaked in during those days.

Ithose peaches with bugs dropped early. There are some with rot but not many. One advantage of bagging is fruit dropped in bags still hanging on the trees, less damaged that way.

What is your organic fungicide spray against brown rot?

The @JoeReal formula worked but had to be used every two weeks or more frquently when rain was heavy in my humid climate.

Safe Organic Control Of Peach Leaf Curl and other Fungal Diseases It also controls brown rot and other insects. I came up with this recipe based on the knowledge of the excellent anti-fungal properties of Melaleuca (Tea Tree) oil and vinegar. Neem oil has also some anti-fungal and insecticidal properties. The soap acts as an emulsifier and sticker. My peaches and Nectarines have been disease free. No peach leaf curl, no mildew, no brown rot on the fruits, and no aphids. This recipe is so safe…

Forgot about it completely. Also, not sure if it would work in our humid east coast. You are convinced that it worked for you?

You are convinced that it worked for you?

It was far from a scientific test. I did have a reduction in brown rot but I did use a synthenic once early in the scean. Next year I may do a proper test by using it exclusively on my Santa Rosa plum or cherry tree. Both get badly damaged by brown rot in my climate.