That looks nice IowaJer. Did you do any shaping or pruning on your CJs, or just leave them to grow as they wanted? Those look huge. Greg

No shaping, I have pruned the biggest one down some just for height, as it was getting bigger than they were advertised to. And I also pruned out the lower branches on all of them that tended to want to grow down toward the ground. They get in the way with mowing and weed whacking. But other than that they’ve been left to grow pretty much how they want to.

One reason I kind of want to keep them as they are, is that the fruit-load is distributed throughout the bush from close to the trunk to outer limbs, and that I think tends to somewhat hide a lot of the cherries from the birds. But if humidity becomes an issue I could end up opening them up some for air flow.

I don’t have any sweets, but I think mamuang is right on about the wet weather and canker. Sweets may be more prone too.

Nice work there on the Black Gold mamuang! Nice setting too.

You could see the trunks of the BG and the Vandalay ( on the right) have Scotch tape smeared with Tanglefoot around the. it is to prevent ants from farming aphids.

Back to the original question… those flowers are very small, half the diameter they should be. My Carmine Jewel that I planted in 2011 and is now 5’ tall is just starting to flower now (in zone 3), and here’s a photo showing their size, which is typical for all the U of S cherries (at least the 4 I am growing). 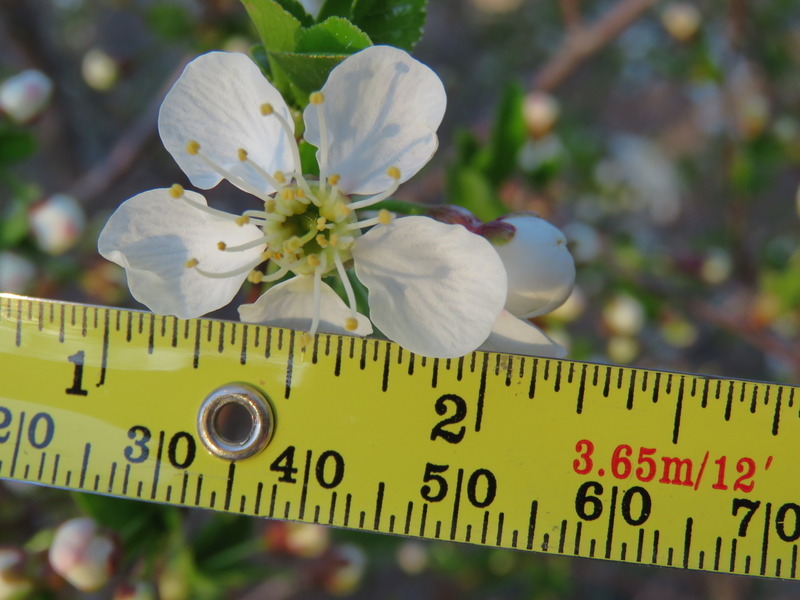 The only one I have in full bloom right now is Juliet, but these cherry bushes really get smothered in flowers: 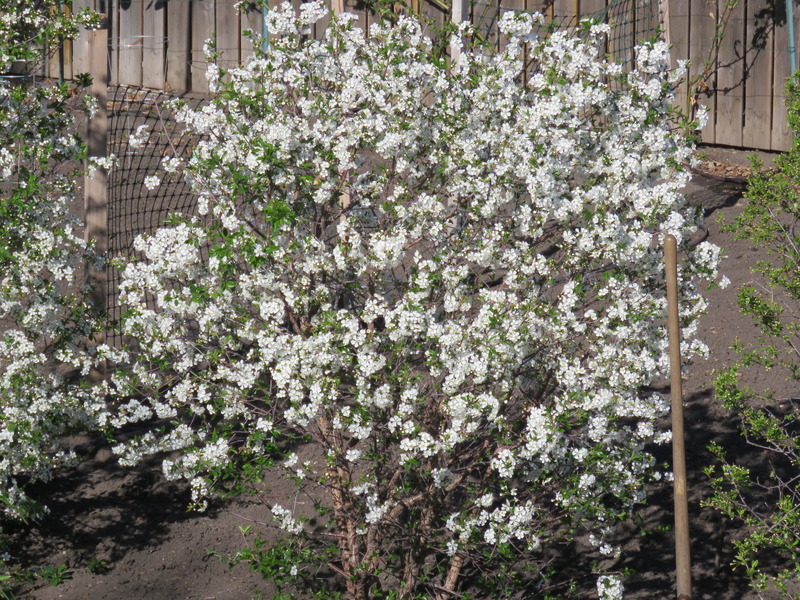 Nice pictures Don, I was hoping you’d weigh in. Been wondering how yours did over the winter. None of my CJ have any branch die-back, however I was over spraying some I planted at a friends place and noticed a few of his had the top 2-3" winter kill.

My CP’s that were planted in 2014 haven’t flowered yet, but seemed to come through winter just fine (I only recently planted a couple Juliet’s, so only my CJ’s flower here so far)

Back to the bloom size, do all your U of S bushes have the same relative size blooms then, or do they vary with the variety?

Just wanted to thank all of you for the great CJ photos. I just got 5 different bush cherries (including CJ, Romeo, Juliet, Crimson Passion and Evans Bali) and I’m more excited about these than anything I’ve planted in quite a while.

If anyone has any photos of bush cherries with ripe fruit, or close ups of ripe fruit, I’d sure love to see them! If not, I sure hope some of you will post some with fruit on board later this year. THanks.

Here’s a couple shots from last year. I’ll look around for a couple more in a bit. 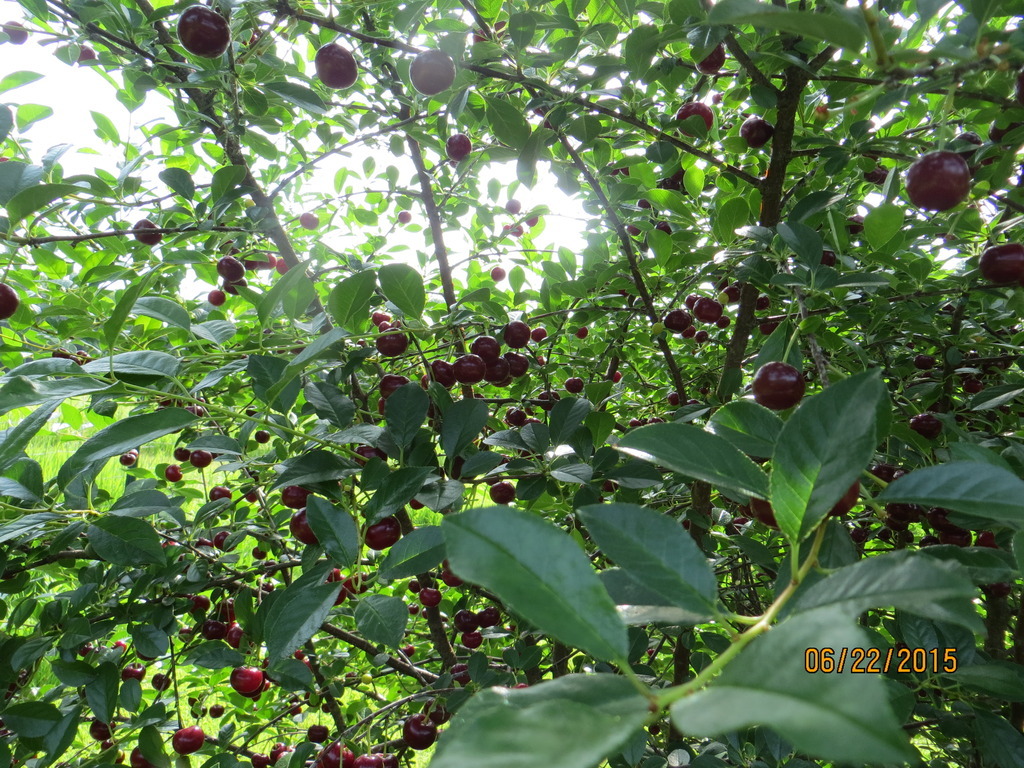 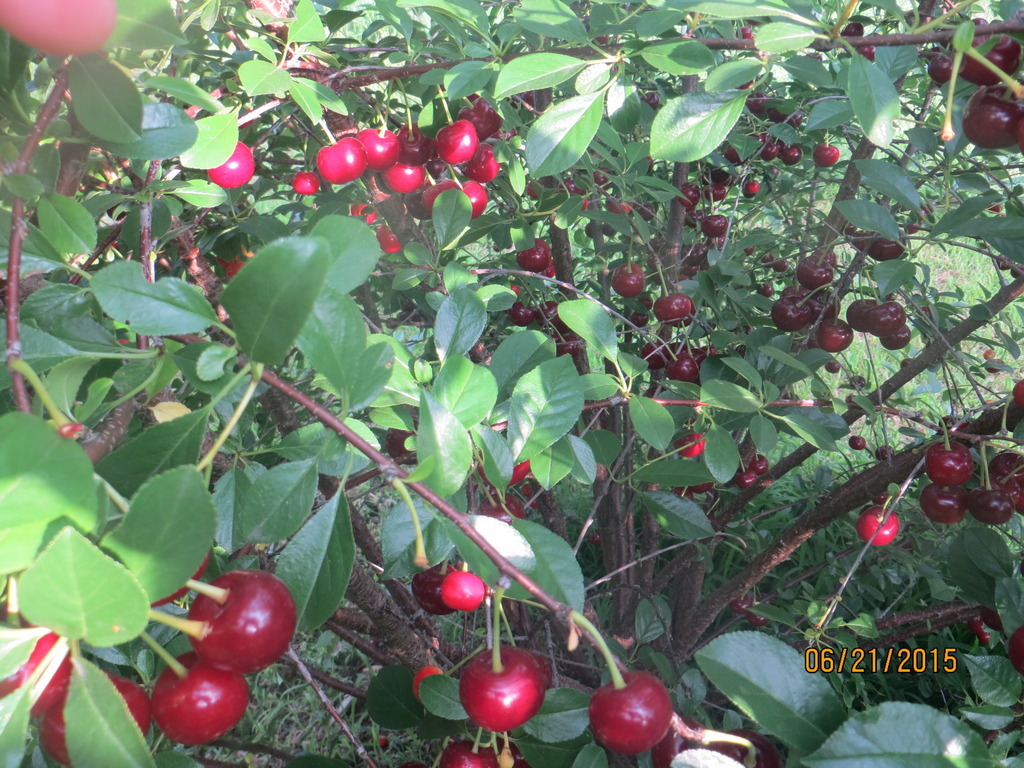 Do you spray for PC? One issue i had when i grew Evans Bali was very high PC activity…as in if i didn’t spray…most of the crop was toast…even more so then my Lapins sweet cherry (which doesn’t get hit that badly—but it might be more a location thing).

Next year maybe my CJ will flower.

IowaJer, We had a remarkably mild winter for this area, coldest night was -15F whereas normally we hit -30 to -35F. So no winterkill on any of my bushes, actually I haven’t seen any winterkill since they were planted in 2011. However I am having a bit of an issue with what I believe is bacterial canker, particularly on the Romeo. That has killed some entire branches on the Romeo, including quite a large branch last year and another one this year.

As for bloom size, yes they are all pretty much the same size, about 1" across. Same for the Evans. The mature fruit size differs though.

As for fruit, I posted this comparison on some other threads, but doesn’t hurt to repost here: 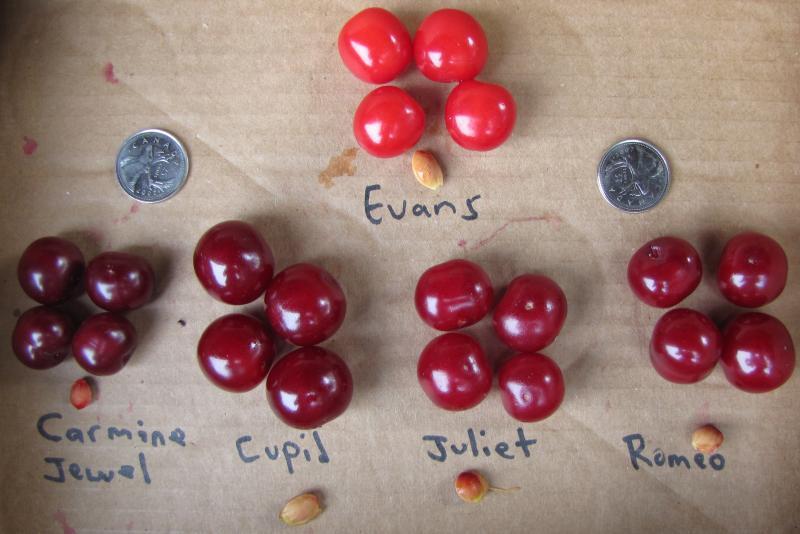 And although my plants have not yet provided a heavy crop, here’s some fruit-on-the-bush pics:
Evans/Bali, this has been my biggest cropper so far. It grows as a small tree here, although some people do grow it in bush form. 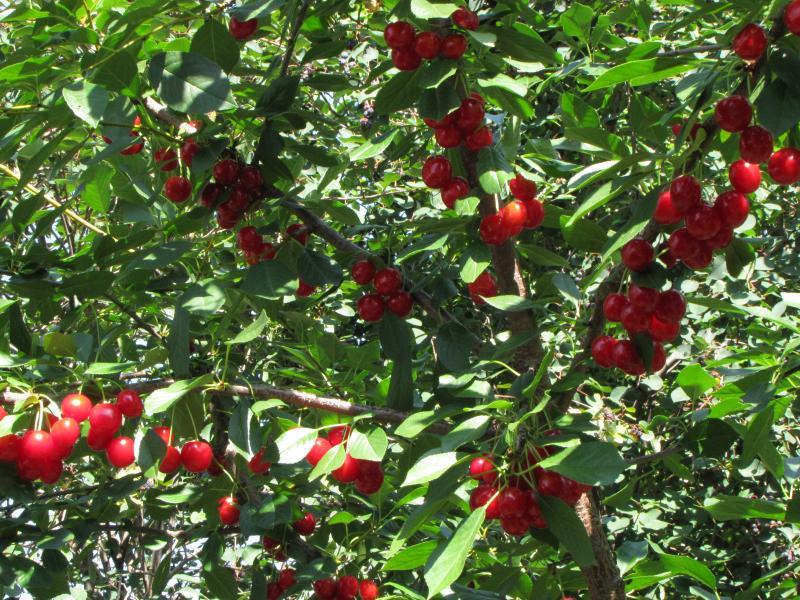 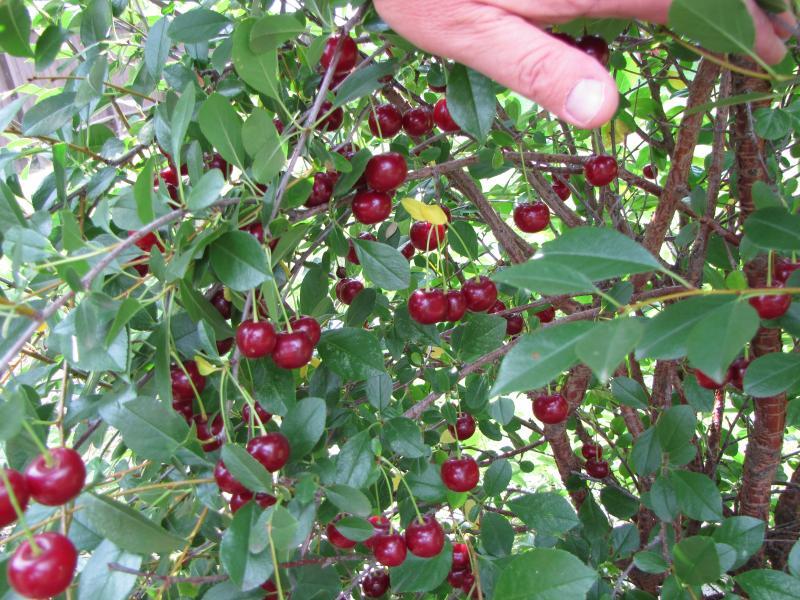 WOW!!! Ask and ye shall receive. Those photos are AWESOME, and so were the ones on the link. I had forgotten about that thread and seeing it just now got me all excited about bush cherries again. In fact, I now feel really bad that I only ordered one of each bush cherry. I don’t think there is any doubt at all that I’ll be ordering more next year, and then once I try them all and figure out the ones that do best in my area and that I like the taste of the most, I;d love to do a hedge row with them similar to what you have done, @clarkinks. And btw…I also have a few monmorency so that photo was also very fun to see on the other thread. What strikes me most is that in all those photos the cherries look perfect- no blemish, no rot, no bug or bird bites, etc. Just beautiful. Thanks again.

I cut my Evans Bali down, but it was just a monster when it came to growth. Had a very sizeable trunk in just a few years. The cherries weren’t half bad, but i’ve had luck growing sweet cherries, so i’ve stuck with that…and now added CJ and maybe some others if that works out.

warmwx, what is PC? I don’t spray my cherries, but maybe when they get bigger crops I might have to? Birds going after the Evans Bali are my biggest problem so far.

Plum Curculio. They hit just about everything from apples, plums, peaches, cherries…i’ve seen them hit blueberries. Can always tell by the crescent shaped mark. 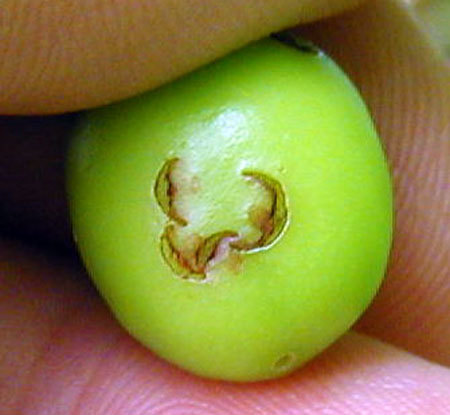 Yes I do spray my bush cherries when I do my trees for both fungus & pests.

Only thing I noticed as far as any issues, was on the Crimson Passion planted last year, one of them had a touch of gummosis. Wasn’t terrible, but I did mention it to Bernis at HBUSA. I kind of felt like the stuff on my ground was very healthy and so I assumed maybe they had somehing going on there. She had already told me CP was a bit more finicky. But it seemed to out grow that and is no worse off that I can tell. 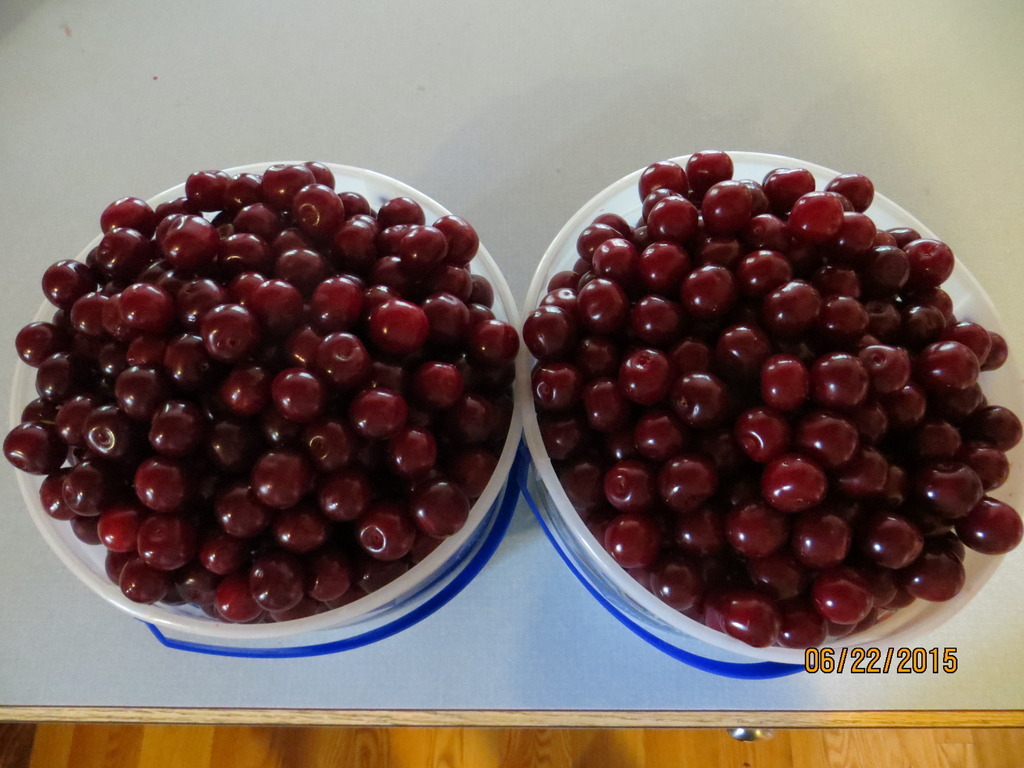 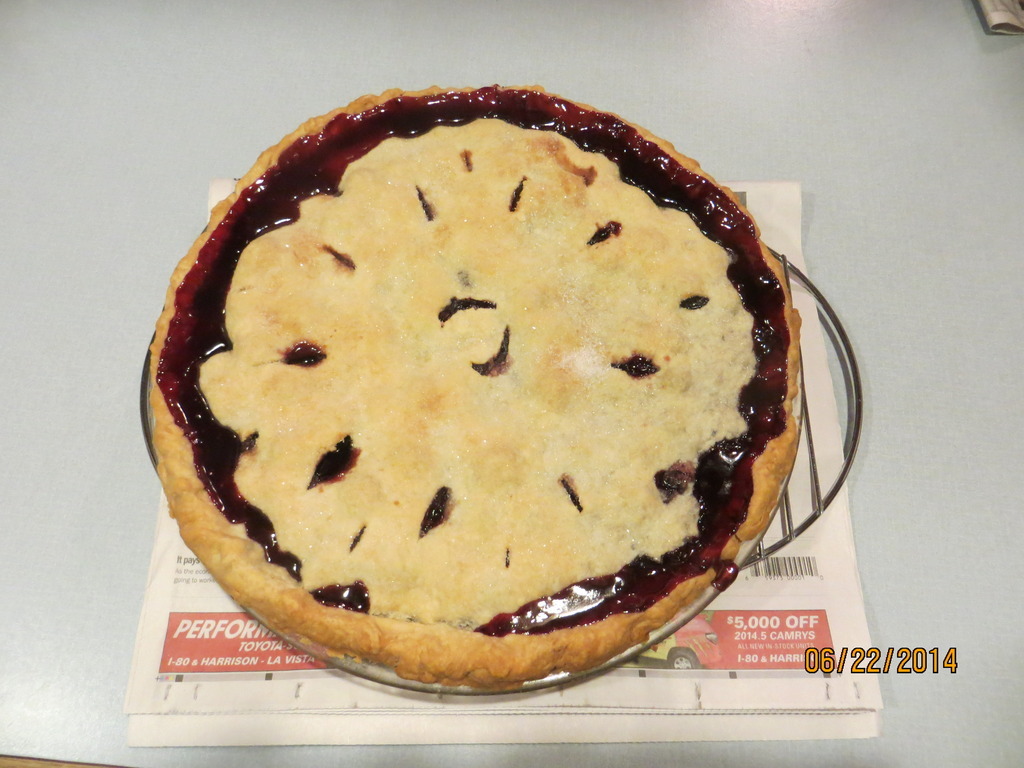 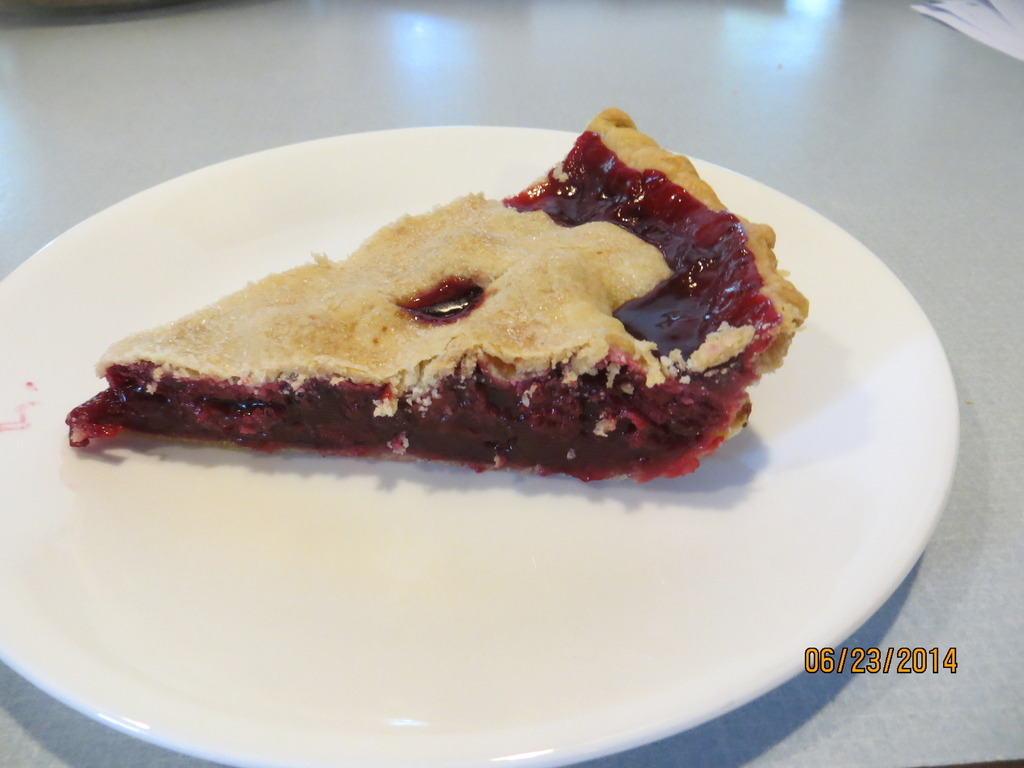 It makes a nice dark pie, very nice! I hope mine sets, if it does I’ll have enough for a pie plus some.

It’s hard to not want a snack in the middle of the night when you see something that delicious!

Go ahead and send the next dozen pies up this way

Ok, sitting here waiting for my phone to ring. . . did you save me a slice??? That is beautiful. How did it taste?

Drew51; speaking of the darkness - I noticed last year when pitting that the dark juice doesn’t seem to stain things like the yellowish juice of my ER. I thought that was odd. (Don’t do a feasibility test in your good cloths just in case, but see if you notice the same deal)

Borer; I agree… I may have to ask the bride if she’ll make up one soon! 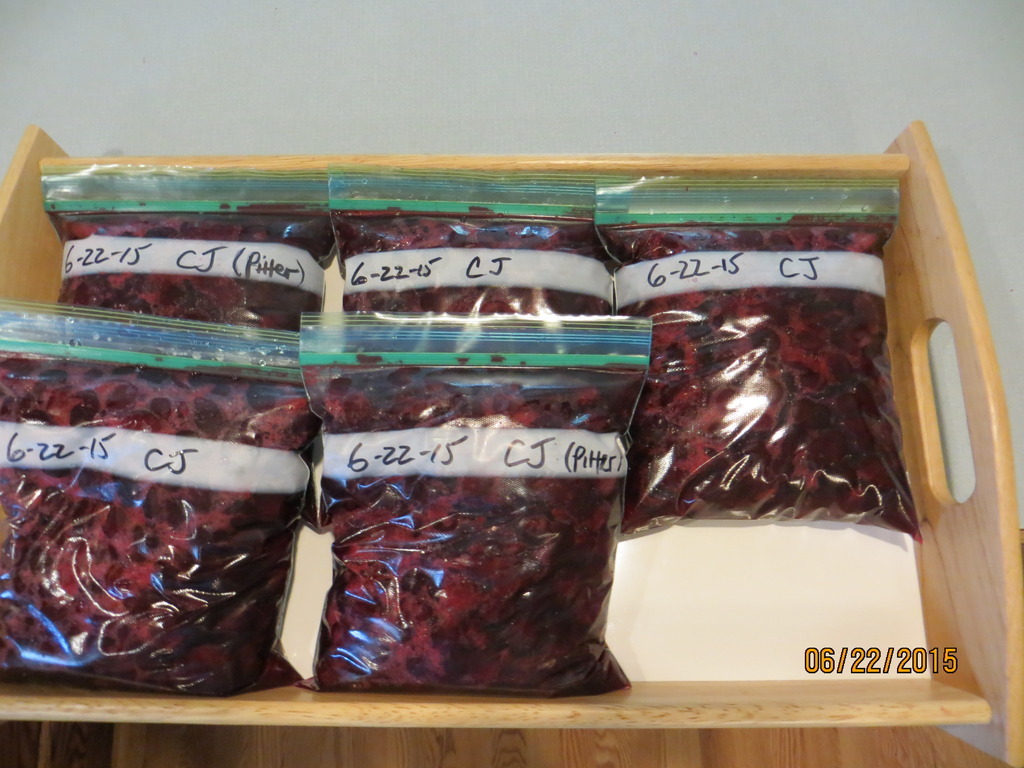 Warm; If my wife had her way I’d be shipping most all of my cherries off someplace! She says we’re going to have to get another freezer this summer, and wants me to take some stuff to the Farmers Market… (We already have 3 freezers)

mrsG; The pie is really (really…) good. I don’t particularly care for the CJ’s out of hand like I do the ER, but they do make a blue ribbon pie!