This is the first year CJ are producing for me. I have them netted and they are medium maroon color right now but probably will get darker. I tested them and Montmorency today, both were 12 brix after a heavy rain. I’ve only picked a few so far but will probably pick the whole bush in 3 or 4 days. I’ll have enough for one pie but I enjoy them so much fresh that we’ll probably just eat them that way.

Ztom,
My soil is relatively poor in comparison to many growers in some places so it took about 7 years to see really large crops on some bushes. This row of cherries were planted as liners in 2011 or 2012 so they have done better. I purchased some bushes The first year they were available in the United States from Gurneys. The test crop I planted in some of my poorest clay soil and was soon impressed. The CJ really benefit from cow manure and wood chips around the bushes every 3-5 years. My soil and at times harsh conditions are similar to some of the conditions they grow in the Canadian prairies. Your cherry yields should start drastically improving every year. Many of my bushes are at their peak heights which for this location seems to be 10-12 feet. My young new bushes are adapting to Kansas weather and are getting better all the time. Some grow several feet in a year. I’m tempted to dig up 50-100 or so and row plant them. Knowing what’s it’s like to pick CJ I wonder if I really want 100. Anyone doing large plantings yet? I would love to take credit for the abundance of fruit and say it was some rare fruit growers skill but the truth is simply these bushes have great genetics. The growers skill matters the first few years when they are small but after that occasionally feed them and spray them and the abundance of cherries will come. They are kinda slow to start but be patient. 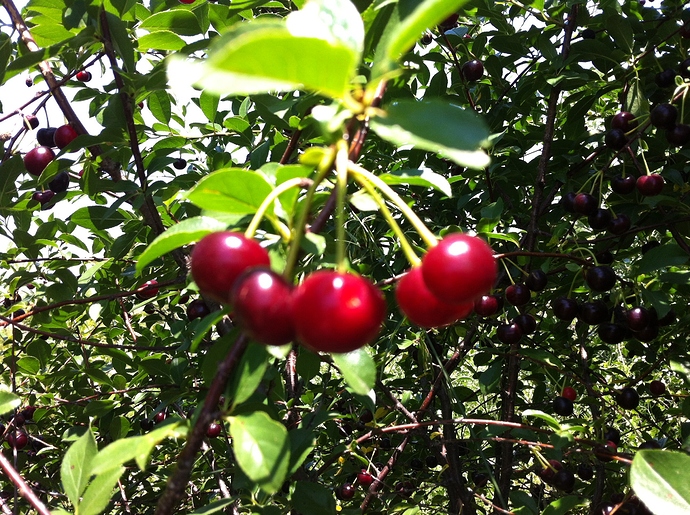 Can you take a picture of your row of bushes. I want to see them from the distance to see how much bigger they look. Remember Daffy Duck saying, ( I’m rich, I’m rich, I’m rich, I tell ya I’m rich!). Are you doing a silly dance and throwing cherries in the air? How did you happen to buy so many CJ’s? Did you get a better price, or did you still pay full price per bush? That’s a lot of investment.

The second batch of CJ were $9 each on sale because they had a bunch left over when the hot weather arrived. The first batch I paid $35 each for and purchased 4 of them I think. Here you go this is part of the row. Nothing is mowed yet since I’ve been grafting and cherry picking. 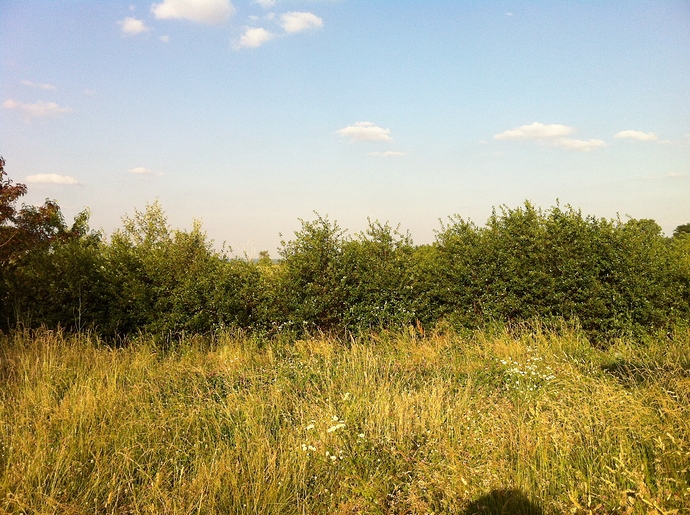 I can tell they are bigger. They will look even bigger once you mow. Watch out for ticks.

Waiting patiently as the cherries north of us ripen up. Waiting to see what their harvest will be like. Iowa is next Carmine Jewel - My Take Away (With Pics) - #53 by IowaJer. Historically there harvest is very heavy. I suspect it will be a bumper crop! Juliet might be another great cherry to add and many others developed in Canada are very good also as seen here My "Romance series" cherries. Canada appears to have another heavy bush cherry crop this year. The bush cherries actually were in a good fruit grower article in 2014 discussing their commercial viability http://www.goodfruit.com/new-prairie-cherry-varieties-making-an-impact/. As many of you know carmine Jewell was released in 1999 but did not make it in to the United States for awhile.

Carmine Jewell picking is finished up today. Picked another 9 gallons of cherries today. In the bucket wound up at about 23 gallons total. We could afford to be picky so we easily discarded several gallons of fruit that was not exactly what we were looking for. Some was half ripe, had a blemish, to small, not ripe at all etc…Seems like @IowaJer gets substantially more fruit but I’m pleased with the overall results. I do not irrigate these bushes so they have not been watered since the second year I planted them. We picked primarily from one dozen or so large bushes though we picked a few from a few small bushes. A couple gallons per bush is not bad. The new bushes will be producing more before long and I will have a harder time keeping ahead of them. At least a half dozen small bushes had a handful of cherries on them. Gave one gallon away to a neighbor and the contents of this cooler is headed for the freezer! Great haul this year! 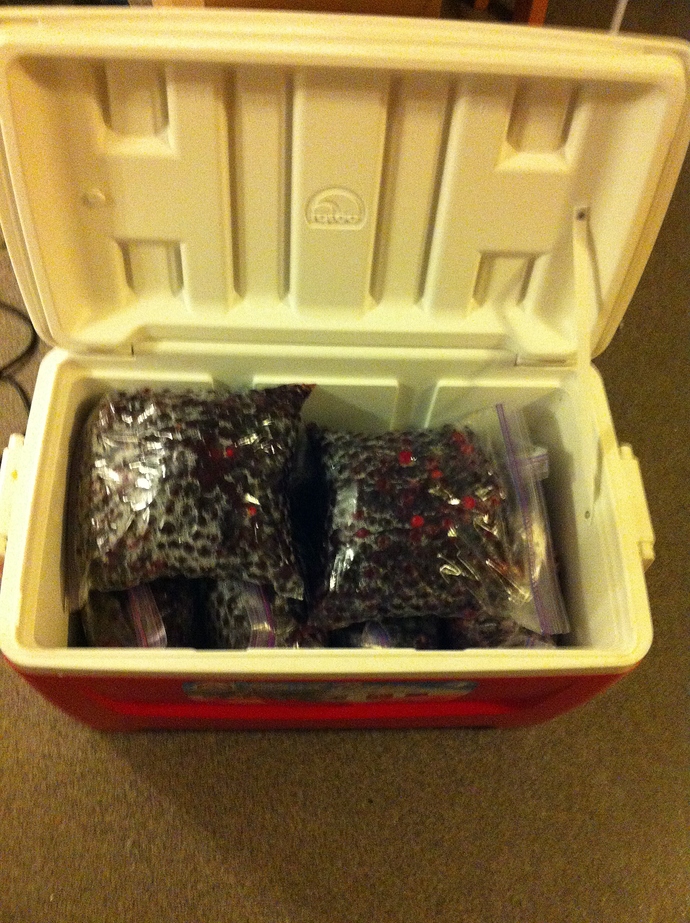 I think they are excellent too. I have 2 plants, a Juliet and Carmine Jewel. Once both mature, that should be enough for me. This year is a little lean as I moved the Carmine Jewel last fall, it produced but aborted a lot. It needs time to establish again. Mine need another week before harvest.The warm weather though has sped up ripening for sure.

Drew,
Those two bushes when mature should yield at least 4 gallons if your averages are similar to mine. If you water your cherries you could increase those numbers. My bushes are in a row as shown above so they compete with each other for soil nutrients and water. If the bushes were not touching each other the production would go up astronomically.

You must have the happiest birds in the world!!!

That sounds good Clark. I can make jams and syrups, and have enough for a pie.
I’m only getting about 1/2 gallon at most this year, I will add with other fruit (currants) for jam. The jam last year was the best of all my jams. I really like cherries, these are really nice plants, glad they worked so well for you too. They are working for me for sure.

Waiting patiently as the cherries north of us ripen up. Waiting to see what their harvest will be like. Iowa is next

Well we’re getting closer Clark. My camera pictures doesn’t take them as dark as some of them really are, but we’re still a couple of days away from starting.

As you can see they are in various stages of ripening. I’ve eaten a couple handfuls of the most ripe and they’re pretty dark and soft, and yet still tart as ever. Seem to have a decent fruit load, and are still sizing up in the heat. 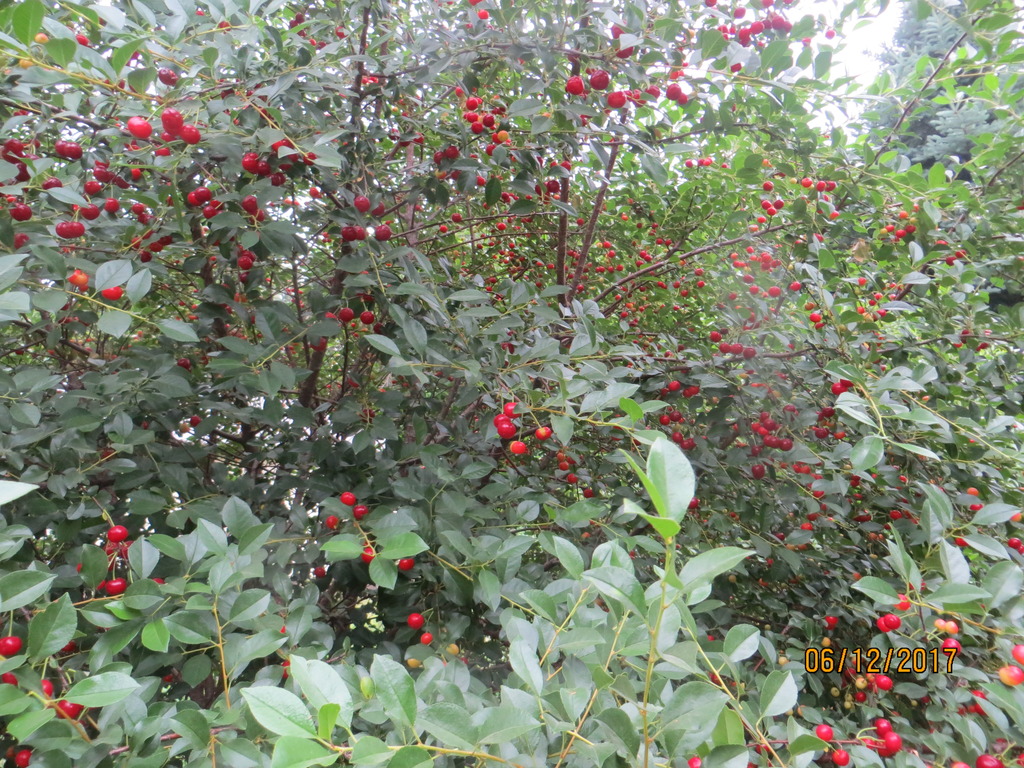 This is a shot of the ER and he’s a bit behind the CJ’s but loaded as well. 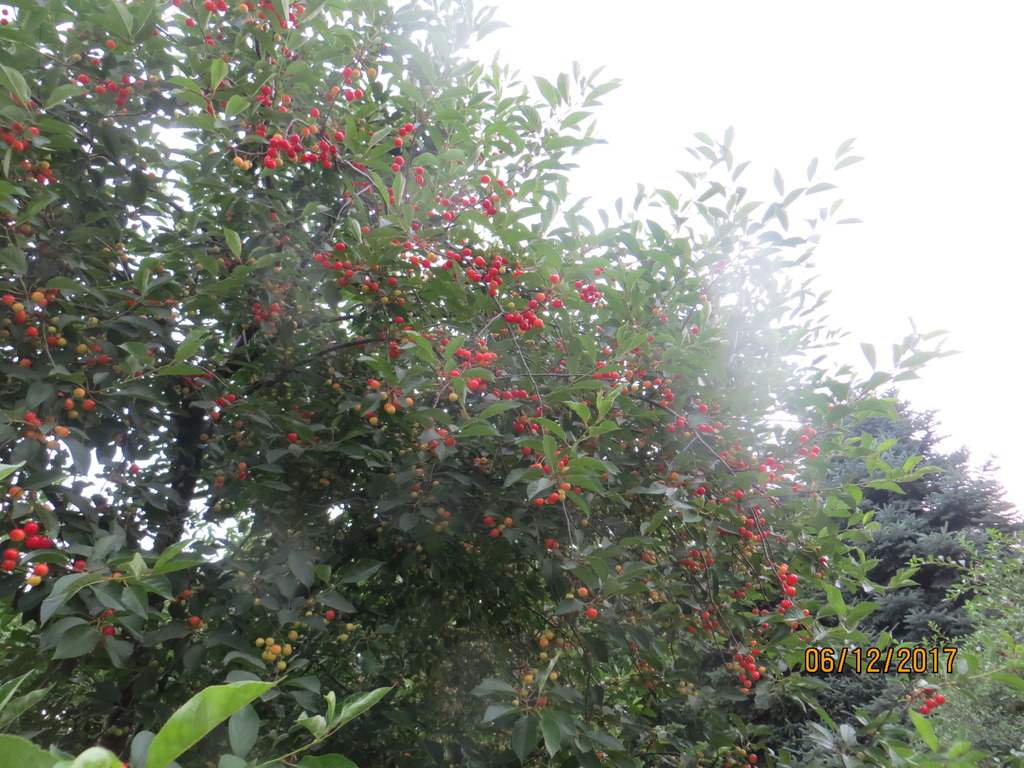 It’s overcast right now, and I’ve even heard thunder. It looks like we could get a bit of rain, and I suspect most everything else needs it around here, but my CJ’s don’t… We’ve been hot and dry for awhile, I think the last measurable rain was on 5/22. So If it rains and I lose a few to rain crack I can live with that - we need rain!

Here’s the standard front shot. I’ve not mowed in there since I decided to put the fence back up, so you can see all the suckers coming up, and the pix doesn’t do it justice, those things are just everywhere! 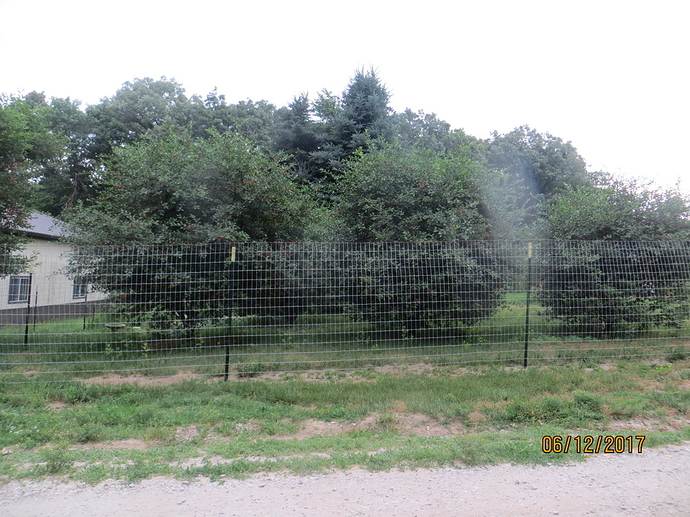 This is an opposite view I took just to show how if left un-pruned, even on 12’ centers they’ll grow to where they touch and you’ve got to either duck under or just push on through. You can probably see that in the first picture, but there’s another CJ bush behind there that kind of distorts things. This opposite view has no other bushes behind them. 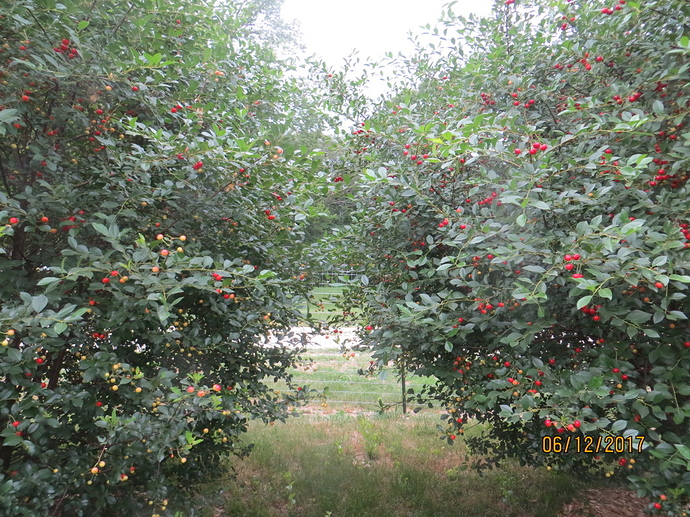 Mine arent even turning red yet in ND… Couple more weeks and they should start to turn… Great pics and harvest!

We got 4/10th of an inch of rain (and it may not be quite over, but it’s not raining now anyway) so I attempted to shake the bushes some to try and get the water off but not sure how effective I was. 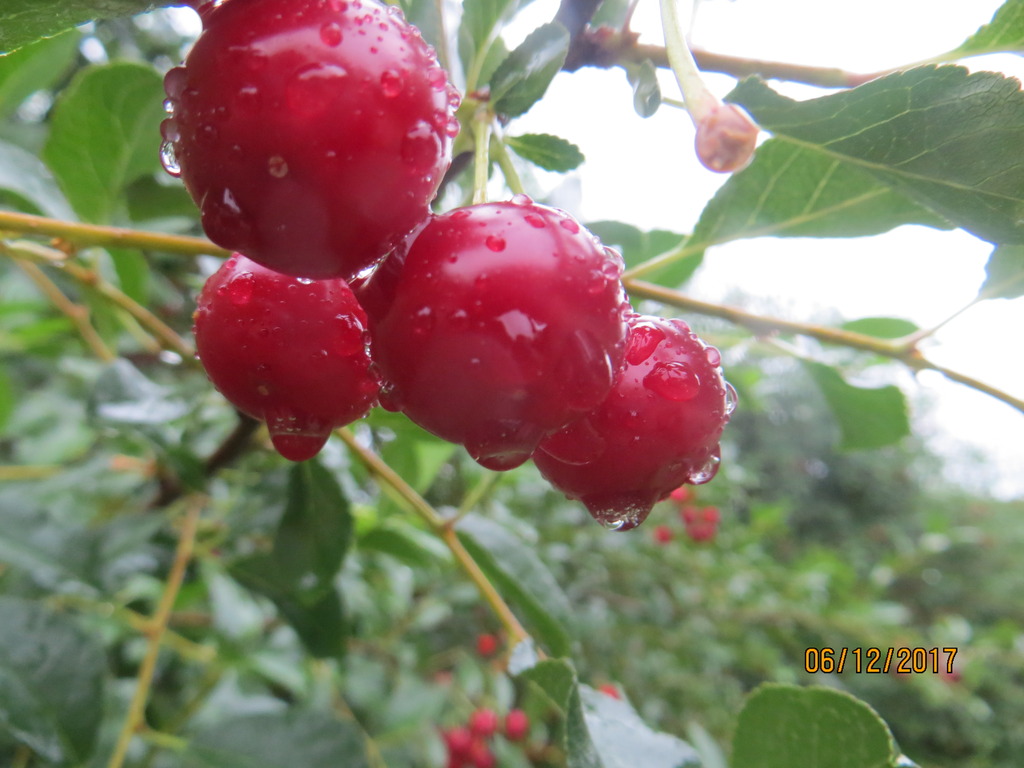 Here are those cherries inside where my camera seems to take pictures that more closely show the color as they appear on the bush, even after my flash went off inside. 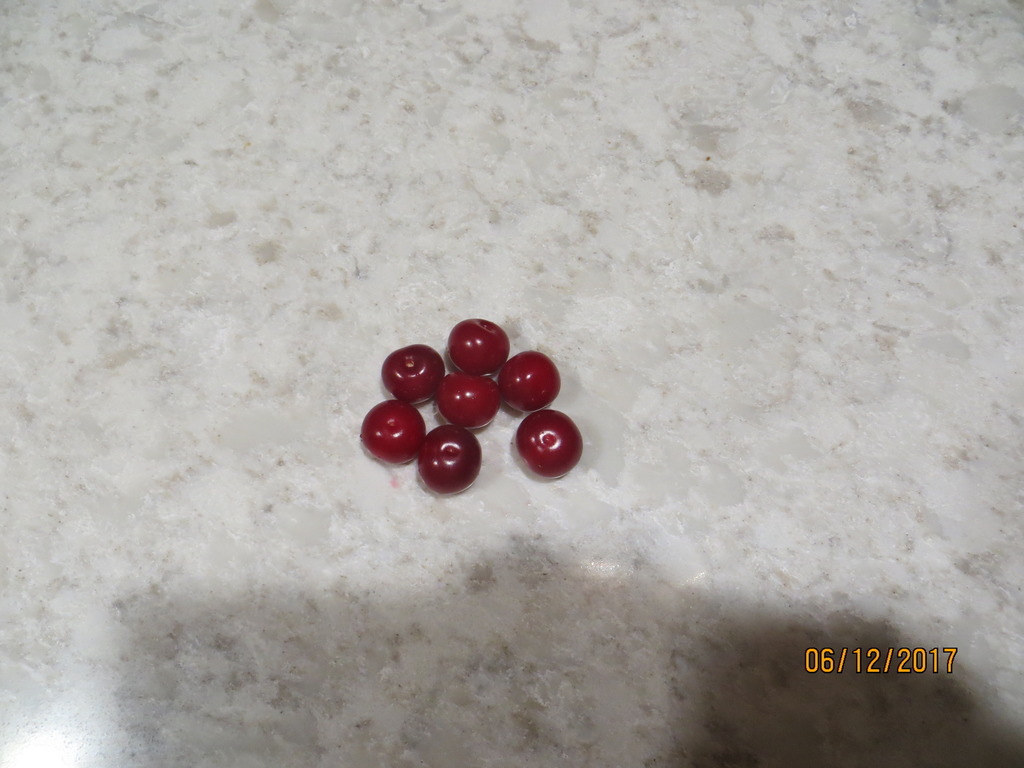 Interestingly, even at this early stage my brix numbers are running mostly 13, with this one on the high side of that. I’d have to look back but I don’t think I got any higher than this all season on last years crop. 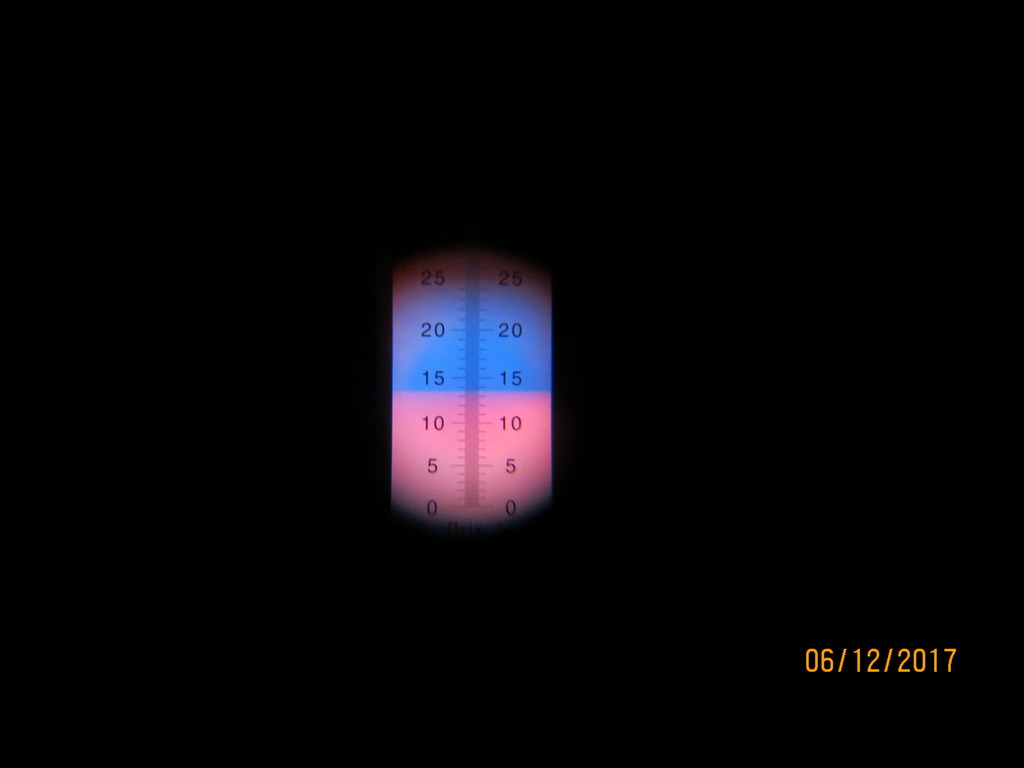 Here’s a closer look at the bushes closing in on each other. Same shot as the one above only I got closer. 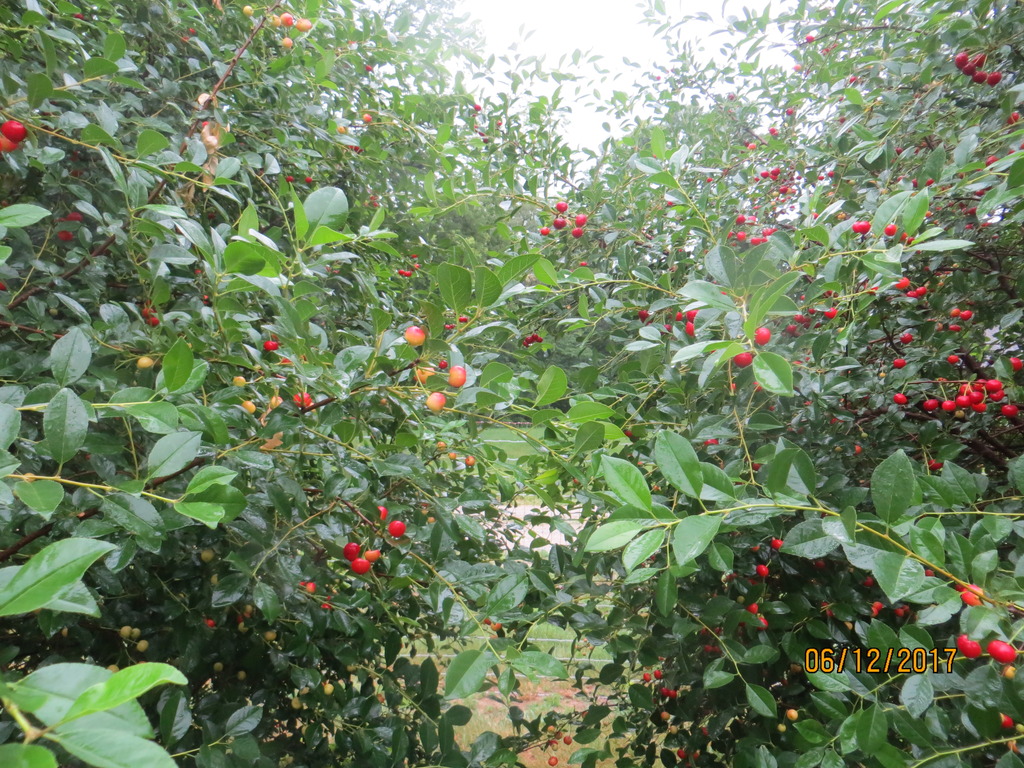 Hello to all in the CJ-club. I’m in

Looking at all those beautiful and suprisingly large and dense bushes, don’t you CJ-owner think the plants would benefit when pruned more open? Sometimes fungal infections were mentioned but those bushes appear quite dense and therefore more prone to fungal infections.

When you prune, how do you prune your CJ? Most of my sour cherries I prune to a kind of a spindle tree with a central leader. Is it possible to do so with CJ or do they really want to be a multi leader bush? How do you prune those? Do they regenerate new shoots from the base (older wood)?

For better maintenance around the bush I am thinking about training a single stem and let it branch out at a foot hight or so. Does that sound reasonable in your experience?

Thanks in advance. I am looking forward to many more of your interesting reports. Since my CJ still is a very small plant, my reports about its fruiting qualities will be late to this discussion, I fear.

I cut a lot of inside growth from my CJ bushes this year, probably 1/3 total mass of each bush, most taken from the inside to open it up. We have a relative dry and windy climate so Im not too worried about fungus, but getting light down inside I think will help the bushes in the long run. I did plant some Juliet this year on my boulevard that Im going to prune to a tree form with a single trunk, so that should be interesting. I chatted with BobB a bit about this and he didnt think it was a GREAT idea, something about the bark on a bush isnt the same as a tree, etc, but Im going to give it a shot anyway. I will put white plastic on the trunks to help protect them during the winter.

@IowaJer,
Your bushes are getting there quick. Like the looks of yours bushes. I suspect the way the carmine Jewell’s sucker we might wind up with a new row regardless how we planned things. Really good bushes! I think they are the best release in a very long time.

That’s a lot of cherries, looks great! It must be a chore picking the higher ones. You have a lot of picking to do.