How long have you been at this?

I feel your pain. I got nothing this year except CAR on varieties that didn’t have any last year. Your trees are much, much farther along than mine are!

About 4-5 years but learned how to keep them in shape only last year.

Tom, these are beautiful even without apples.
I’ll be converting my open vase trees to a trellised system which approaches an espalier-like arrangement but I’ll be most fortunate to accomplish something as tidy as you have. Do you have a favorite reference for doing this?
My 2 cents on the ‘no apples’ issue would be (1) carbs, (2) nutes.
My interpretation may be incorrect but I thought that the ‘next year fruiting’ efforts (i.e. pinching, bending, pruning, girdling) began, at the earliest, after the summer soltice, and that before that (on a non-fruiting tree) vegetative growth is maximized in order to store up and translate carbs to the roots.
I’ve been a gardener waaaaaay longer than playing with fruit trees, but Phosphorus (triple/super) has always served me well in getting fruiting to happen abundantly. As it turns out, nute transport doesn’t happen in the tree w/o phosphates except in rare instances. So maybe there is an easy soil test to see if your levels are sufficient for fruiting.

What this about pinching the growth? Do you just pinch it with your figures until it pops a little or do you break all the way through it or am I on the wrong track entirely?

Look up the genesis of this thread from last season . There is a whole conversation explaining “pinching” etc.

Basically Tom went back to square one last season. See the link above.

How long does it take fruiting spurs to develop? I’m thinking one year is not enough.

I have other fruit trees (pears, plums, peaches) that basically sharing the same piece of 1/2 acre that flowered and fruited successfully so the Phosphorus may not be the issue. Maybe they need to build up 2 year old woods for that to happen. One strange thing is I have 4 apple trees, 3 are espaliered, 1 was not touched/pruned/pinched/ect. (HoneyCrisp). Last year, there’re some blossoms on the HoneyCrisp but no fruiting, the other espalier gave me 2 apples. This year, nothing except green leaves on all 4!

Even my little paw paw tree that I planted last year yields 1 flower bud! And nothing to show on the apples!

I just wondered of this year’s weird weather!

It’s disappointed but I guess it needs 2 years old woods. You’ve stated it perfectly correct: Last year, I went back to square one after cutting off all stubby branches and rebuilt the fruitwoods…

This year, nothing except green leaves on all 4

Phosphorus is sucked out of the soil by anything bearing seed. No Phos. No seed. No fruit. Maybe it was drained out and a local (to those non bearing trees) soil sample would answer that.
Ample soil Phos (for fruiting!!) and still no fruit means uptake issues which are nicely remedied by microbials.
The kind of ‘weather’ that impacts minerals is rain. Too much washes minerals into the subsoil. You see this in spades if you try to grow peppers and tomatoes.

All my other fruit trees are flowering and fruitlets formed so I still don’t think that’s the problem… I’m convinced that I’ve hit the reset button last year by pruning off all major secondary branches in an attempt to rebuild the espaliers form. If I still not getting any result next year, then I would think of different strategy, provide that 2017 winter is going to be somewhat normal…

Not much is change except more pinching work for this year. I noticed that some new growths are already terminated after a few set of leaves and other continues with green shoots. Probably the terminated ones are the fruitwoods of next year? 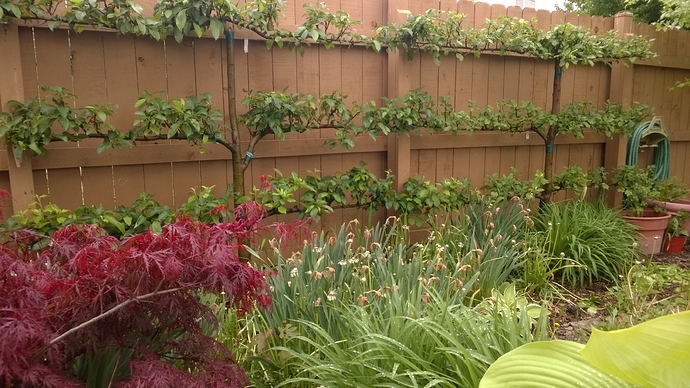 In a thread called “Grafting dummy question” a few days ago I posted a youtube vid - https://m.youtube.com/watch?v=BV8HOPFVcoM -

One method tthe poster used to entice fruiting spurs was to break the shoot but leave them attached. The sequence and explanation begins at around the 1 minute 40 second mark.

Maybe you could try the “break and hang” method on a few vigorous shoots and see what happens.

I am going to try that on a few of my vigorously growing plum and pear shoots.

I’ve tried “break and hang” the shoots 2 years ago during early 'til mid-summer on these 2 espalier apples but it did nothing.

Now gathering all thoughts, I think last year drastic pruning to reshape my espalier form maybe the key (for not having fruit this year) here. This year, if I retained all of last year “sticks”,its green leave from these sticks would store up enough carbohydrate (from JustAnne4’s suggestion) for fruiting process that results in fruiting next spring…

I don’t want you to think that I am losing faith in the “pinch” as you have last season. So by all means continue doing it. That is how I got my apples to spur up .

I was just suggesting a limited experiment on a small portion of a scaffold.

This year, in my orchard, I will try the " break and hang" to see if that cuts down on the tree constantly creating new shoots from the neat pruning cut site that I have to keep pruning completely off.

One of the points made by the you tube poster was that " break and hang" sapped some of the tree’s vigor ( in keeping the broken shoot alive) leading to fruit spur development below the cut. I will check to see if it also keeps brand new shoots from forming at the pruning site. Just trying to save some work.

I’ve resumed the pinching activities almost every other day for these espaliers. And I’ll try a few “break and hang” to see if there’s any different this time around. Maybe my trees were too young couple years ago?

I valued your advices and still do. And I have faith that I’ll see more positive result by next spring.

Meanwhile, I’ll keep up with pinching and updates…

This past weekend I made it up to the orchard after being away for two weeks.

One theory for letting the broken branch hang was to sap the the energy of the tree in trying to feed the hanger. What I had found in the past that if I prune with a clean cut, the tree starts sending up new vertical growth from the neat cut. Hopefully, with the hanger-on there will be less new shoot growth to replace the hanging shoot.

This is an especially interesting test this year. As you can imagine, with my stone trees having ZERO fruit to energize, they had explosive growth. What I did was to “break and hang” all shoot growth on the right side espalier arms and pruning off with nice clean cuts on the left side. I will have a literal “side by side” comparison study to report on later in the year; first to see if it inhibited the growth and second if it led to more spur development.

The first dozen “crunchie snapping” sounds were very difficult to bear. But then I “evolved” my thinking, adjusted and stopped worrying about the plant abuse police.

I reasoned that my trees did not fruit this year was that I may had over-pinched at too early stage from last year. I pinched whenever the branches were just popping out, tendered and had not gather enough maturity in its system to produce fruit woods. All green tips (inches growths) were pinched at almost every few days until mid/late August last year.

I’ve reflected upon last year’s pinching and come up with a new strategy. This year, I’m going to treat pinching differently. I’m allowing all branch growths to about 12" before zooming in with a pruner. I’ll prune off most top growths, leaving behind only 2-3 inches or 3-4 leaves at the base.