Oh, but there’s lots of levels of south

I personally am in East Texas 8a, the same as much of Arkansas but hotter, and wondering about San Antonio in the border of zone 9a and 9b which is much much hotter.

My fridge has a half gallon of these in it and between me and my grandson we’ve probably eaten more than that… and I must confess that there are 8 more plants in my greenhouse that had escaped the blackberry perimeter. 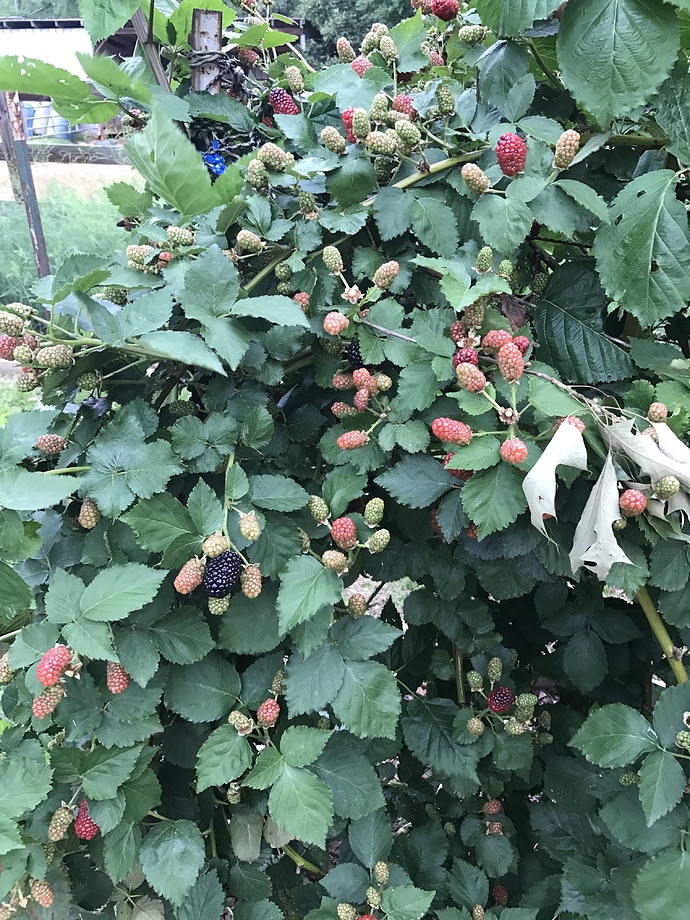 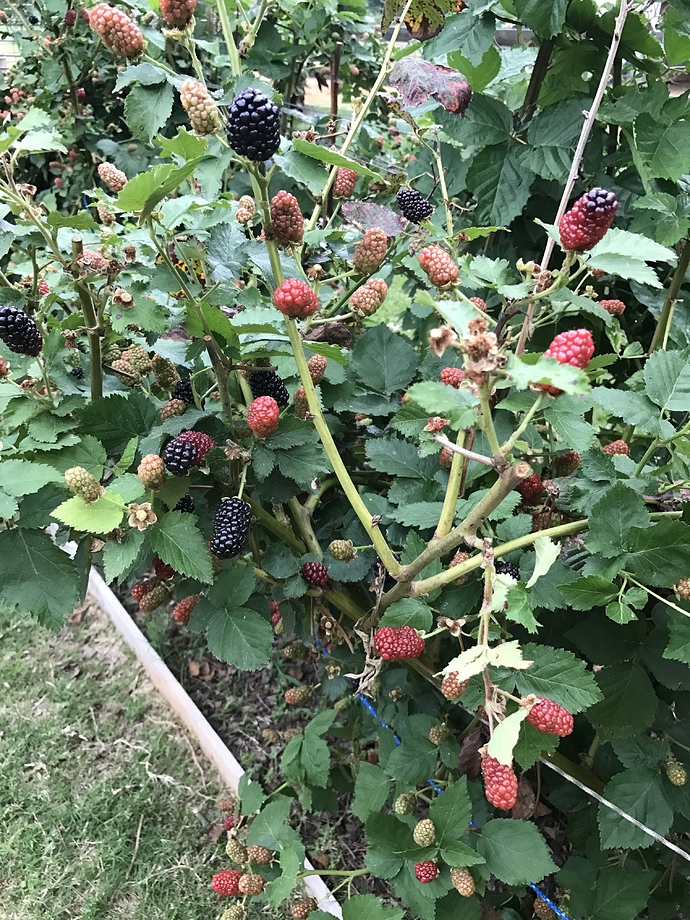 I’ve been wanting to ask a question about blackberries, I hope you don’t mind.

Blackberries are supposed to be very well-adapted to my area, but I’m leery about planting them due to the fact I’m not sure if I like them?

I’ve only had ones from the grocery store, and they have a bitter aftertaste I cannot abide.

Do homegrown blackberries have this aftertaste as well, or is that just the store-bought ones because they’re picked unripe?

Do homegrown blackberries have this aftertaste as well

My experience is that they are tart to very tart when under ripe. Some even many are tart when fully ripe. But I haven’t noted a bitter or astringent after taste. At least not on many berries. The taste varies a lot from berry to berry.

I love blackberries but have mostly had wild ones. I rarely taste a grocery store berry because the taste is not right. Even many domestic grown berries are not good and. Y that I mean “spit-out” bad. I do not like bitter of any kind. Fruitnut is correct in saying that ripe berries are sweet without a hint of bitterness but you have to let them ripen before picking to eat the really good ones. I think the PAF are the closest to wild Blackberry taste that I have tried. I see you are in same zone as I am. It’s good Blackberry area.
Katy

Blackberries are supposed to be very well-adapted to my area, but I’m leery about planting them due to the fact I’m not sure if I like them?

You will likely enjoy the right blackberries which are few and far between. My heirloom blackberries have a nice flavor. Like any fruit there are plenty that have that bitter after taste that some people such as @scottfsmith can easily detect as well. Scott I recall grew a variety that he was going to remove for the reasons you mentioned of the bitterness. Those blackberries he does not care for is likely Because of the high level of salicylic acid they contain which has the taste of aspirin. Certain soils seem to bring it out more than others. This link I think you might find interesting
Fact Sheets for blackberries, blueberries, raspberries, and strawberries ~ Connecting Berry Health Benefit Researchers . Blackberries are very healthy and delicious but a friend mentioned to me the first of the series which I think is prime gem were not desirable flavored in his opinion but advised he was told both prime ark freedom and prime ark 45 had a nicer flavor. I’m growing them to extend my crop but when it comes to flavor time will tell. It’s hard to beat the flavor of the blackberries I already have. The blackberries I’ve had from the store did not taste good at all. Part of taste is location and in Kansas like Texas the sun is very hot which really improves blackberries flavor. In the case of some blackberries they are just far to tart to be good. A good blackberry is sweet and delicious with no bitter aftertaste and no tartness at all. I have a variant of my heirloom berries raised from seed that have a bitter aftertaste but it’s not intolerable but not as good as my main 2 acres taste. See this post since several varieties are discussed Blackberries by the gallons

Kate,
Those blackberries are gorgeous! I’m a little jealous. They sure do look delicious.

They can be sharp if not ripe. It’s supposed to storm here this afternoon and I just picked another’s 1 1/2 quarts that are borderline but I’m planning to make a cobbler with them. I hope you aren’t disappointed with the flavor but at least they have flavor. Some varieties don’t. And I do think they taste better than last year.

My favorite for taste --sweetness even when not entirely ripe-- is Cherokee. It’s also as early as my Natchez and very productive. Unfortunately, it has really bad thorns.

I can send anyone a Cherokee start or two if they like. It also gets really, really long stealthy canes and tip-roots easily, lol. Put it where you can watch it closely for secret creeping canes than can run 15 ft on the ground, no joke

OTOH, it hasn’t been as vigorous in other spots I’ve put it, so maybe just don’t put him in your best soil if you don’t like monsters.

Late,
Looking forward to them producing berries in the fall. Since there are no other berries that time of the year I’m hopeful they will be perfect for us.

Thank you for the offer of some Cherokee but I think if I were to get Blackberries, they would be thornless. I have kids, so I know they’d chase a baseball in there or not watch where they’re going, etc…and I don’t want to be picking thorns out of a crying child

I was actually thinking of maybe Navajo? I think I’ve only heard good things about it, and it is supposed to taste excellent.

I was actually thinking of maybe Navajo?

It is a good tasting berry but for me it was a little less vigorous growing.

With blackberries, is “less vigorous” a feature or a bug?

In all seriousness, how bad is it? Like, “eh, it’d be nice if they produced a bit more but oh well?” or “gosh, these canes never grow”?

I didn’t mean to make it sound like a problem. I just fertilized a little more to get good replacement canes. Navajo was one of the earliest erect varieties developed.without thorns. It is still one of the better tasting ones to me but I moved and no longer grow it. I’m trying out PAF now.

My understanding is thornless canes lack the vigor thorny caned varieties have in general. My thorny caned types will bury you in blackberries. One year after picking 40 gallons we gave up and realized we out produced what we could pick. I’ve heard prime ark freedom for thornless types is a good producer but to get the big numbers they have thorns. Prime ark 45 has thorns though they are nothing like my berries.

Here’s my limited experience with those two blackberries. I’ve been growing PA45 for for 3 years out in the orchard. It is thorny, but hardy. The floricanes have survived -11F and -15F the last two years and the flori- and primo- crops are both good if a bit seedy and large berries. PAF I have grown in my greenhouse along with 4 other thornless varieties (planted last spring). They all survived and thrived without protection and are flowering now. I did not get a primocane crop last fall so I haven’t tasted PAF, but it is extremely vigorous. Assuming the flavor is decent, I will likely get more to put in the orchard and replace the thornies as I should be able to manage them just for their primocane crop even with a cold winter here, and in a mild winter I’ll get a bonus crop.

My understanding is thornless canes lack the vigor thorny caned varieties have in general.

I’m not sure that is true? Chester and Triple Crown produce like crazy, huge plants too.
I get hundreds of berries off each plant. Loch Ness is my favorite thornless though, balls of sugar, not that productive, but OK production.
Chester 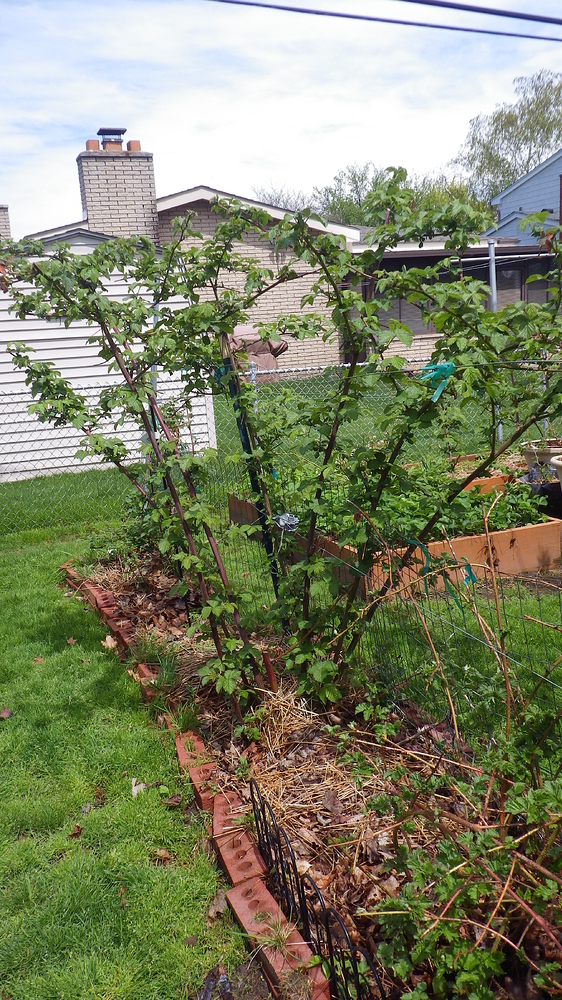 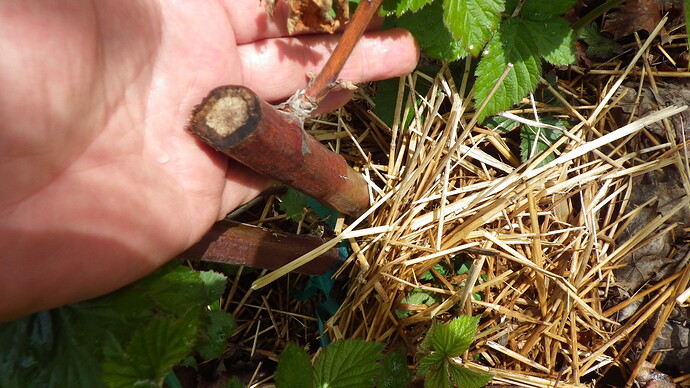 This plant needs no support.

My dormant plants are now developing small leaves and soon we will know how tolerant they are of my soil.

Do you have PA45 yet? I have a rooted start that volunteered that’s a nice size if you’d like it. I like the variety, but Cherokee still tastes better, like with my other blackberries, lol. Mine got really tall over the fall, which I didn’t expect of this cultivar for some reason, and it’s setting a crop over the whole top expanse right now. It’ll be a good harvest soon, I hope!

My only complaint is that the fruit can suffer some in the really hot times. I have to pick them quickly or they get mushy and over-ripe. That’s like my raspberries here in that kind of heat, so I think it’s just the weather. It does also produce into the cooler fall, so that’s nice.

Thank you for the very kind offer but I did get a dozen or so 45 this year and another dozen freedom. I’m excited to try them.