What effect does fermenting have on the heat of the peppers?

@TheNiceGuy, the green tabascos are perfectly fine, they just don’t have much of the distinct flavor. Just a generic green pepper

@MES111, my experience is that fermentation has zero impact on how hot they are. Others may have a different experience, but that’s what I’ve observed.

I envy your charred barrel aging! I would love to try that some day.

I must have mentioned using charred oak, but I can’t let you think I have real barrels, or any climate controlled place to store them. I simply took small chunks of oak heartwood and charred them until well blackened, and then submersed them in my jars of fermenting pepper puree.

Haha, I see now that you said “chips.” I must have seen “charred oak” and my imagination ran wild. Oak chips still sounds good to me. 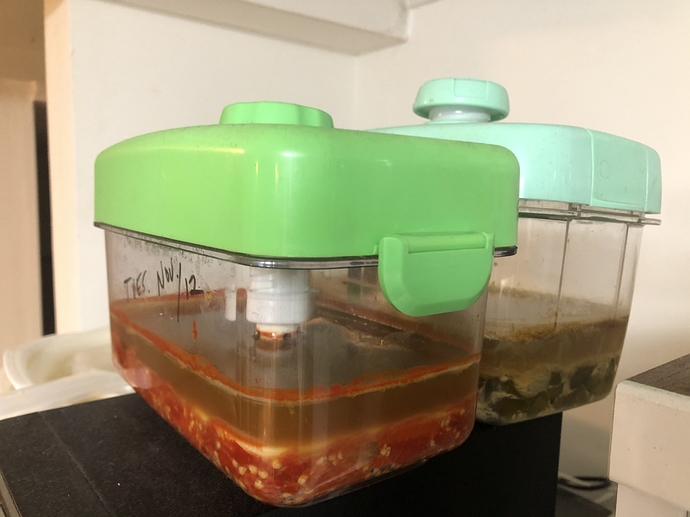 I blended these up last night. I noticed a slight almost like sewage smell. researching on the Internet it sounds like this is normal? There’s some normal smells as well, but the smell is quite offputting. Poked through and couldn’t find anything mold-like looking (spikey etc). I tried a bit of both, didn’t get sick, although the Tabasco is way too hot to eat very much.

Nice guy I would say that you have/had way too much air space in your containers. I ferment mine in an open container, then after several days move them to a glass 1/2 or gallon jug. i leave an inch of space at the top and use an airlock wine making style. I just hot packed 1.5 gallons yesterday that had aged for 15 months. No off odors 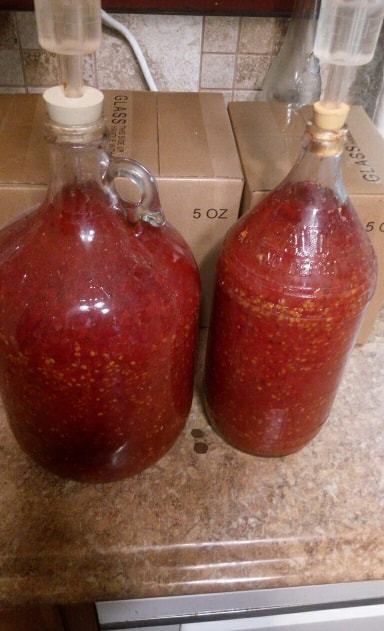 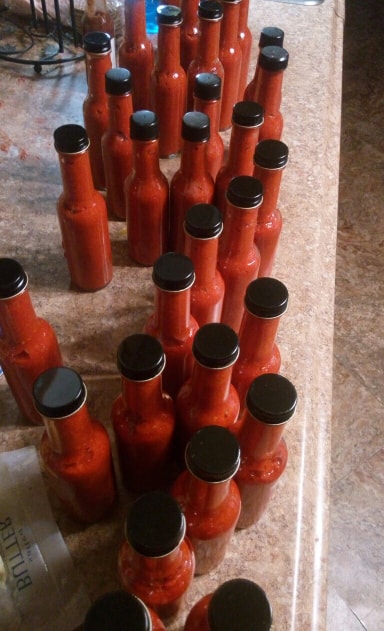 I’m not terribly concerned about the headspace. Traditional fermenting crocks have lots of headspace. The ones without lids have effectively infinite headspace. The most important thing to keep oxygen out is to keep it submerged, which the peppers clearly are. My real questions for @TheNiceGuy are what temperature was this held at, and how much salt did you use? I know you can get away with no salt, but it gives a higher risk of undesirable (not necessarily dangerous) microbes taking hold. As for temp, anything above 70 is more likely to get poor results: mushy ferments, off odors, mold. You can increase your salt content to slow it down (and it is good practice to adjust salt content within the 55-70°F range anyway), but it’s still better to keep it under 70°.

Great looking sauces guys.
The salt content should be OK, I followed the correct procedure and amount (2.5%? Can’t recall the recipe). Temperature was usually quite cool, about 50° or so.

Huh. Weird. I’m stumped then. It’s possible that it was too cool, but that seems really unlikely to actually cause a problem. Were the peppers raw or cooked? If they are cooked, the populations of Lactobacillus would be really low or non-existent. Sorry to be stuck on the basics, but I’d love to find a logical explanation so I can keep it from happening to me!

It looks like your jalapenos are green? IMO green peppers make a terrible fermented sauce. I think I’ve thrown every batch away I’ve tried. I’m not sure if it’s because there’s less sugar than a ripe pepper? It also looks like you have quite a bit of garlic in there. That could be causing the smell too. I usually just put a couple cloves in a batch. I’ve tried a jar of just fermented garlic cloves and again I didn’t really care for the flavor.

@TheNiceGuy, I wonder if you have a build of kahm yeasts in there. That can lead to off smells and flavors. I try to sterilize everything before fermenting and keep the peppers whole and weighted to keep them below the brine to make sure I don’t get any developing, but it still happens. I do most of my ferments in quart or smaller jars so that if one or 2 don’t go how I want I can afford to just throw those out. If I see it developing early, sometimes I’ll just process that sauce right away instead of letting it ferment for a long time so I don’t risk it messing up the taste if it becomes significant.

Here are 2 jars about 4 months old. The one on the left has a skin of kahm yeast at the top and you can see the white yeast settled on the peppers in the brine as well and the one on the right, now that it is done fermenting and the lactos have settled out of suspension, is nice and clear. I could still use the one on the left, but I have enough that I’ll toss it and just use the jars that stayed clear of yeast. 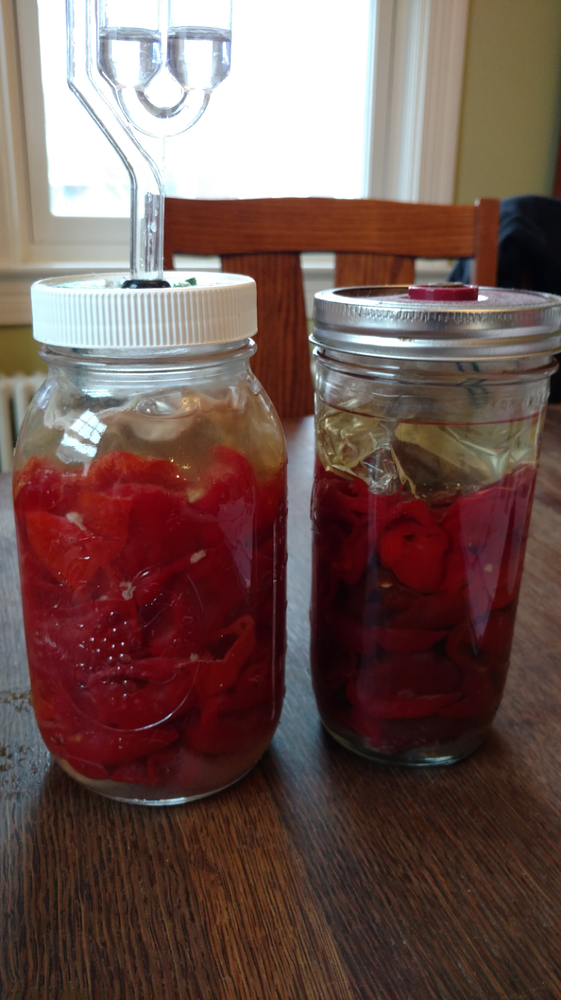 Thanks guys. Sorry the pictures aren’t very clear, but the jalapeños on the right have a lot of What looks like snow on top of the peppers, still submerged under the brine. There’s not very much garlic in either mix. After blending up these seem OK.
The Tabascos on the left, if I recall correctly, didn’t have any (the White is plastic on top). But these Tabasco still have quite a foul odor after blending up.

Raw peppers. The temps flux between about 50-60 degrees.

Yes, mine had murky water.
I think I should toss the Tabasco as the smell isn’t going away. The jalapeño seems passable though.
I wish we could upload smell to the forum ;).

Headspace shouldn’t matter once the microbes ferment, and produce CO2. You should consider inoculating your peppers to ensure a speedy fermentation. Any large homebrew supply shop should stock Pediococcus and Lactobacillus inoculants for making sour beers. I would not rely on wild yeasts to inoculate, since many produce funky odors and flavors.