I think the one with the rod in the center would be a bad choice. The rod gets grim from turning in the metal bracket and it will also be in the fruit pulp. I have used the old wooden type. Here is a photo of what we have used. The metal rod will get grease and grim, but it will not be mixed in the fruit pulp and passed into the juice. 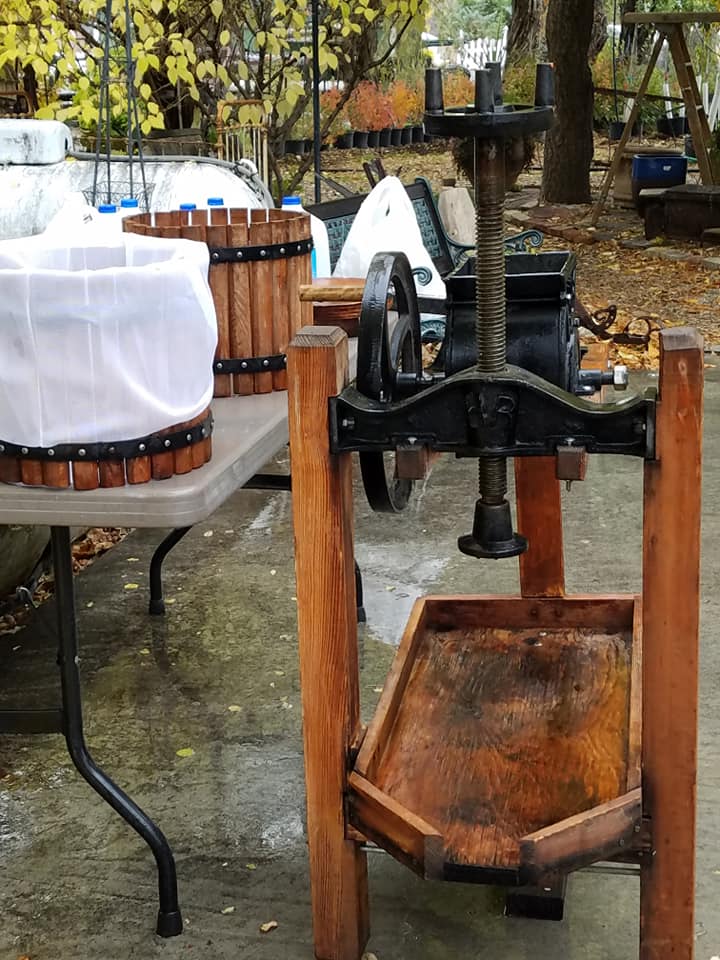 That’s pretty much what I was thinking after watching some you tube videos on them. That is a pretty expensive one you have in the picture. I’m afraid I am shopping in the less than $250 bracket. What happens if you do not use that mesh cloth?

I work at a greenhouse and nursery, we borrow the press from a neighbor. The first year we used it without the mesh bags and it did fine. The second year, my boss’s husband rigged up a garbage disposal in an old sink metal, to grind up the apples and then pressed the mash in the bags. We did around 150 gallons of cider. That was in 2018. Last year we didn’t get very many apples. Hopefully this year will be a good apple year and we can do it again.

Try looking on Craigslist for an apple press. I haven’t looked for a while, but I have seen them on there.

I use a center-screw ratchet press with a metal basket for wine and cider and have been using it for longer than I can remember without issue. I have not used the other model. You can generate a lot of pressure with the ratchet design. If whatever you plan to press will not be finely cut up going in, you will lose some yield unless you can generate real pressure. No grease on the screw comes in contact with the pulp or juice on mine–the ratchet operates above where it is with a foot or so of wood blocks in between. If you are pressing really small volumes, I would think the side-support model would be better. For the reason mentioned above, with the center screw, the ratchet handle will encounter the top of the basket as you go down if you do not have spacer/press blocks. I have never encountered that as a problem, but usually fill the basket for each pressing. If you needed to press only a small portion of the basket, you would need a bunch of press blocks.

I looked at that model and your right that 3 ton jack is sure to put some pressure on it. E-bay has a 3.7 gallon one for $170 and is one of the ones I was looking at. Do you have to use the mesh bags? Would 3.7 gallons make at least a gallon of juice?

The garbage disposal idea is pretty good. And cheap. I’m thinking just connect pipe at each end of the disposal and feed straight into the basket. Just curious as to how much silt you end up with at the bottom of the juice container? Doe’s it need to be strained?

The one I use does not have a jack. The basket is designed for winemaking and the holes are sized so there is no need for mesh bags when pressing grapes. When pressing cider, the grinder I use puts out pretty runny stuff and I need to use a press bag of some sort. Yeah, I think you would get a gallon from a 3.7 gal. press. I get about 3 gal. of juice from a bushel of apples.

I have the center screw press and use a disposal grinder. I first tried cheesecloth and the pressure blew holes in it and pulp ran freely through the slats and into the juice. I cut a small whole in a pillowcase and stainless worm clamped it at the bottom of the threaded rod and then filled the pillowcase and tied it shut. Works well but the pressure still destroys the pillowcase after about six pressings. I went through several pillowcases but the juice was clean until a burst would send pulp into the juice.
I am still looking for a better solution. Grease and grime on the shaft did not pollute the juice but I cleaned the rod between pressings.

Pleasant Hill Grain sells a kit with plans to make your own: https://pleasanthillgrain.com/maple-creek-diy-apple-cider-press-wine-press-kit

I have an off-the shelf Maximizer press and Maximizer grinder both from Pleasant Hill Grain. The press works great, but the grinder is meh. Apples tend to get stuck in a position in it where they just bounce around and require poking at to get grinding again. If I run it myself I can usually keep running at a good clip, but if I have help feeding apples in it from my son it generally gets stuck in this way and I have to jam the apples with a stick to keep them grinding. It is generally worse with large dessert apples, and would probably take the smaller cider apples just fine.

This is the one with the jack I was looking at. Sorry this is what I thought you were talking about. This one does look like it has some power. 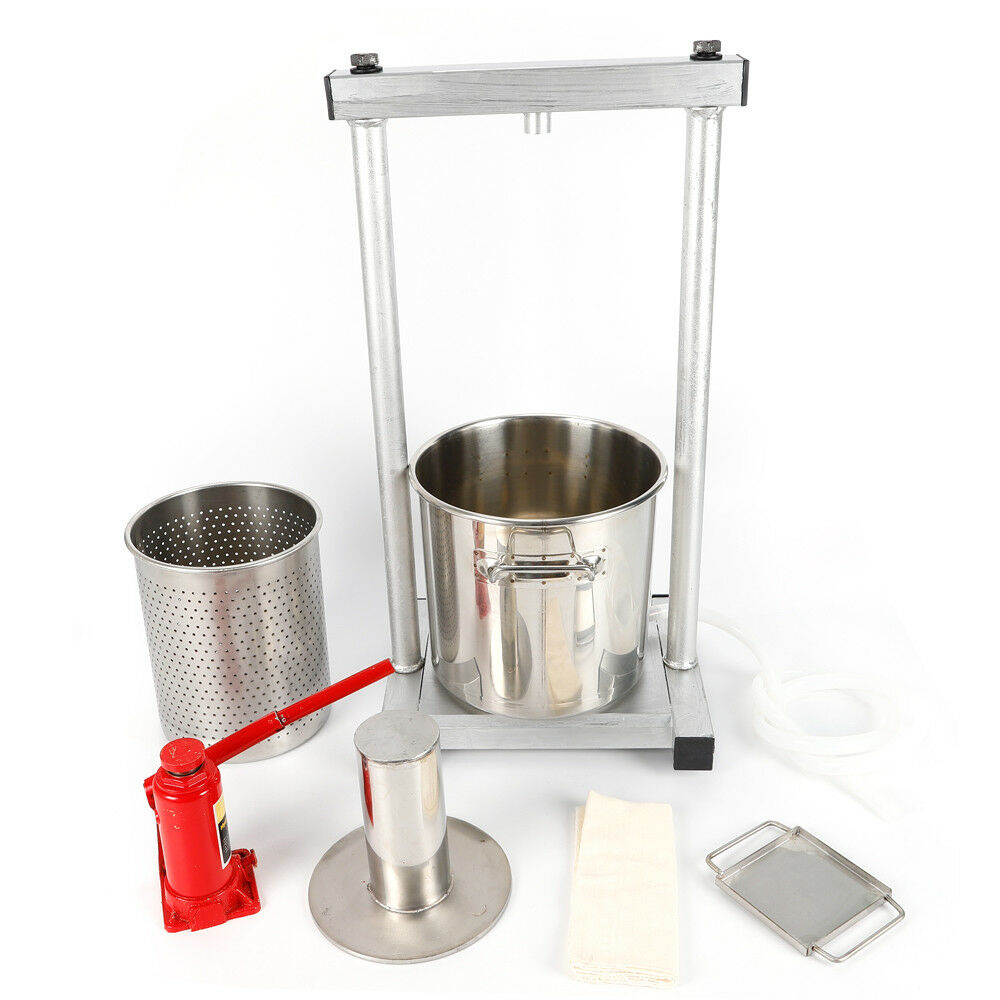 I have the same unit as Levers, Maximizer with their grinder that mounts on a swing arm. We have the one-bushel model and a wooden basket; there was no metal basket option when we bought ours 8 years ago.

We’ve been very happy with it. It is very sturdily built for the most part, and the “ratchet” design is very efficient and simple. We did have a weld break: opposite the swing-over hinge, where it couples to the frame, it tore out and we found the welds were pretty weak spot welds. We re-welded it with a stronger weld and it’s better than new. Needs a coat of paint every couple years to prevent rust as the paint wears.

It’s not the most efficient, because you can either grind or press, not both. We could take the grinder off and mount it to a separate frame to have simultaneous grinding and pressing, but it’s no big deal. We usually have anywhere from 2 to 6 people working on the “assembly line” (wash, cut, grind, press, handle juice) and the press keeps up. We’ve made many hundreds of gallons of cider. It was a great purchase that we’ll probably use forever, even if I do get a more industrial press for more bulk juicing.

I think the internal-screw models are nice as well, because they have both fast and slow ratcheting and can be released for a quick up or down, which my simple screw cannot (I have to spin it all the way up and down).

I have the one pictured above with the stainless basket that you posted ejwox i believe ($220 off amazon, i paid.less last year) and love it. Not sure how grease could ever get in the juice as stated above? I pressed 10 gallons of apple juice easily and averaged 1 gallon per press. I used it with a mesh bag for the first 5 gallons and without for the second 5 gallons, either way very little pulp ended up in the juice, no noticeable difference in sediment accumulated in the carboys. I would not recommend it for grapes though, it was not efficient. Not a big concern for me as i bought it for apples. All of the work for me was in quartering apples and sending them threw the scatter, and clean up. The pressing part was a small fraction of the work. Overall i was surprised.how easy it was to get that much juice. Next year i plan to attach a drill to my scatter, if that works the hardest part will just be quartering the apples.

They are all talking about the other one with the screw coming from the bottom getting grease on everything. Just curious as to how long it took them to get it to you? On e-bay ejwox has a long shipping date. Good to know it works without the bags because those are pretty expensive. If you have an impact gun that would probably work better than a drill.

I use a garbage disposal to grind apples also. I have one of best consumer models with all stainless chamber and it overheats quite rapidly. It works great and we get a ton of juice. I have mine mounted in a tall oak bar stool, with a stainless bowl with bottom cut out, It drains directly into a 5 gallon bucket set to the side of the stool. It will grind whole small apples, but larger apples need to be cut in half before they are fed in. Usually we have 2 people washing and cutting apples, 1 person grinding and 2 people pressing and it goes pretty fast. I set a fan to the side of the disposal and have taken the insulating cover off the motor, because that acts as insulation, fan blowing on it seems to help tho. when it overheats, need to let it cool for a few minutes and push reset button and it goes for a while again…

That makes sense. It took less than a week to get it. I wish i would have got the one with the stainless plate, worth the extra 20 to 30 bucks more than i paid for mine, never having to worry about paint coming off. Not that any has. Must of been a recent upgrade they made as i dont remember seeing that last year. I also recommend you get the ejwox scatter, i had no problems with apples getting stuck like ive seen mentioned about others, then again we quartered large ones and halved the small ones so maybe thats why. If a decent impact drill works on it next year itll just be a matter of cutting apples the rest will be painless.

Just my 2 cents ,
I love my bladder press and grinder ,!
Not cheep , but really easy.

[image] My apple juicers / press grinder I started with a cheep centrifugal juicer ,did not like it,to slow. Bought the jack lalannes,really good for small amounts of juice. Large feed tube.2 3/4". Small apples go in whole. Affordable $100.00 ? I like the jack Lalanne Lower right.in photo: Bought a Ruby 2000 on eBay ( nutrifast is about the same ?) Smaller feed tube, apples needed to be 1/4 ed. So slow to feed. An industrial machine for sure. Great for carrots other veggies . Just no…

I started with the electric centrifuge. A lot of sediment and foam with the metal centrifuge next to impossible to clean. Just now stepping into the 4-5 gallon range, but I’m sure I will end up with the bladder before it’s over. The thread does have some interesting info. Thanks.

Thanks to all that responded. This is what I have bought based on those responses. If anyone has one please chime in with comments on it. $160 Total cost. 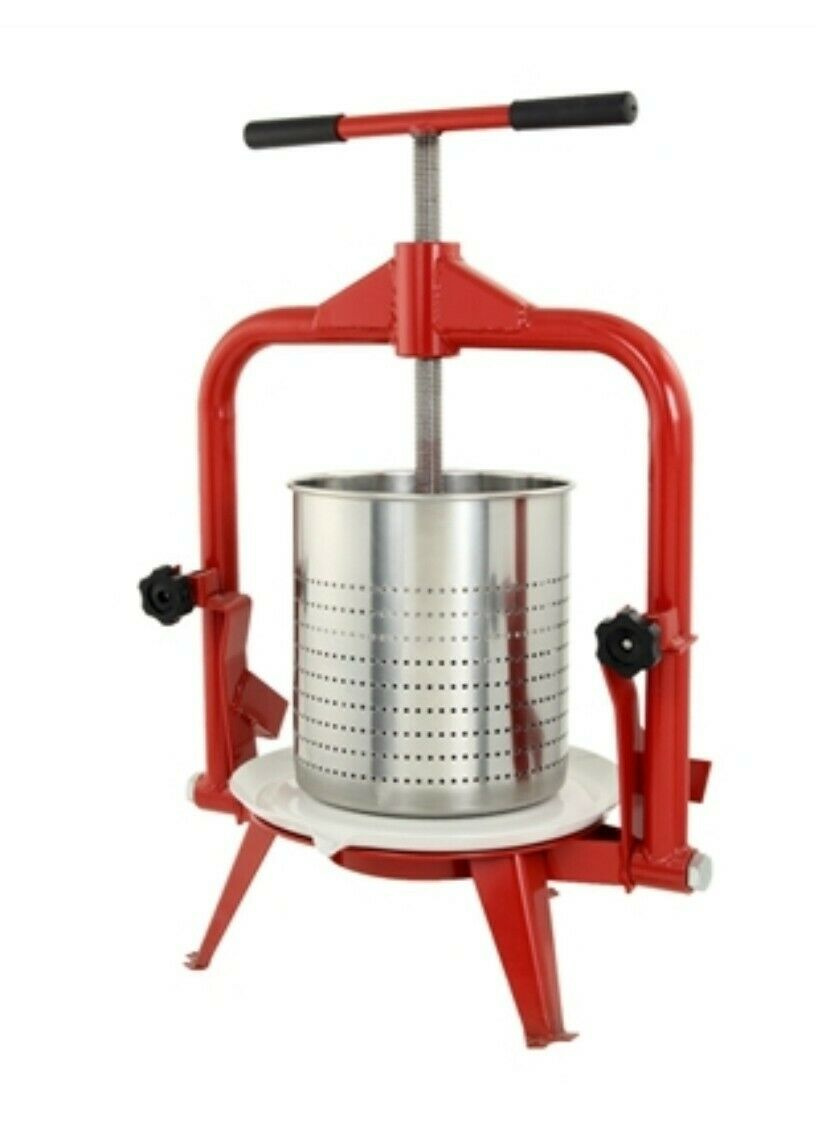 We used a mesh strainer. Still had a little sediment , but not very much. We used the strainer because we were outside and the hornets and the bees love pressed cider. Lol