Do you know the rootstock

The first one was a Winecrisp on G202, it never woke up this spring. It never bloomed in previous years, but struggled to grow. My guess is standing water or high water table was a factor.

The second was a Grimes Golden on G16. It had been severely damaged by rodents or borers so it had about 50% of the rootstock girdled. It produced a few apples last year, and bloomed this year, but couldn’t handle a freak windstorm in April. It snapped off at the base. I should’ve staked it but didn’t, but it may still not lasted more than a couple more years.

I have a couple other trees on G16 and they’re doing well, including another GG.

The Winesap that fell over this weekend was a potted Lowe’s tree. It said ‘semi-dwarf’ on the label, but nothing else, so I have no idea. My guess is maybe M7, but can’t say for sure. It did have significant root suckers, so that’s why I suspect M7. I remember it came from a nursery in TN.

31F last night. Just a few tenders got nipped a little, but I haven’t been to the lower garden yet, it’s usually colder down there. Hope my peppers didn’t get hit, I have to harvest some for drying and some really nice Fresno’s to make hot sauce.

Another indication of just how powerful Sally has become is the fact that it has sucked the water (almost) out of Mobile Bay. DO NOT go out into the bay as this will quickly rise once the storm leaves.

TWC says up to 3 feet possible in Pensacola…

Seeing inbound velocities on the Mobile, AL radar of up to 110-115 knots about 3,500 ft AGL in the NE quad of #Sally’s eyewall atm. Standard reduction + gusting places #Sally’s current intensity ~95-100 kts, & potentially supports an upgrade to a category 3, major hurricane.

Looks like Sally made the north turn and will hit Mississippi and mostly spare Lousiana. Probably no rain in Kentucky from it. But, MS, AL, FL panhandle, GA, SC will get a lot of flooding.

I lost my winecrisp this summer…deer kept every leaf eaten off…and I had to spray to try and keep that from happening to some other varieties. (Mine on M111)

Other than perhaps needing staking, despite Cornell indicating it is self-supportig, G202 has seemed like a good root. Don’t have any experience with G16.

Eye is about to make landfall near Orange Beach, AL in the next hour or so.
Also unusual to see convection now on the southern side of the eyewall. She’s full of surprises. Also, the eyewall is now pounding downtown Pensacola and entering Gulf Breeze. 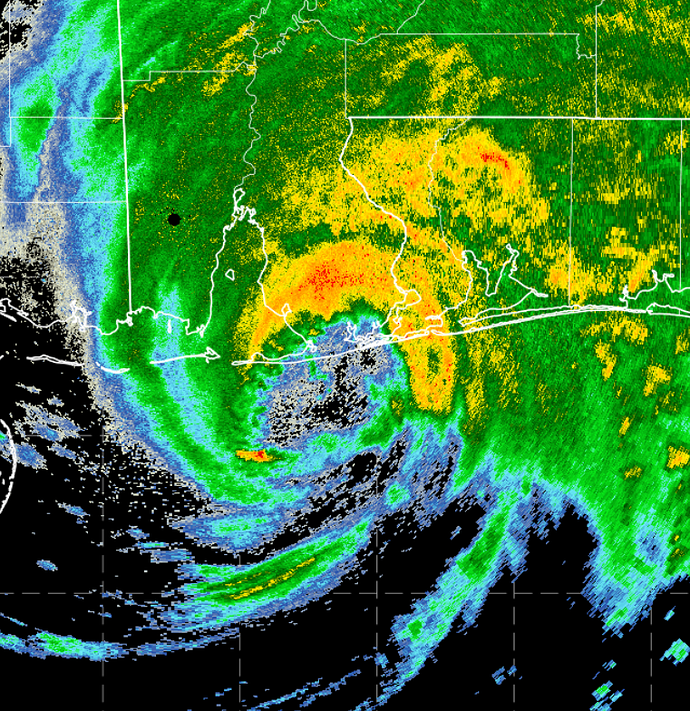 Looks like it runs up thru the middle of N carolina and off the coast.

Very fall like weekend for the northeast with strong high pressure moving in over the area.

Temps around here should drop starting today. Highs only in the 60Fs tomorrow.

yeah they’re taking about lows in the upper 20’s starting thurs night and highs after that in the mid 50’s. growing season is all done here. even the peppers in the greenhouse are getting picked tomorrow. potato harvest is in full swing by this weekend. high schools 3 week harvest break starts at the end of this week. time for the hardworking kids to make some money! i used to look forward to harvest as i could make as much as $2500 and get all the nice things a teenager wanted. still have my old biker leather jacket i bought in 87’. 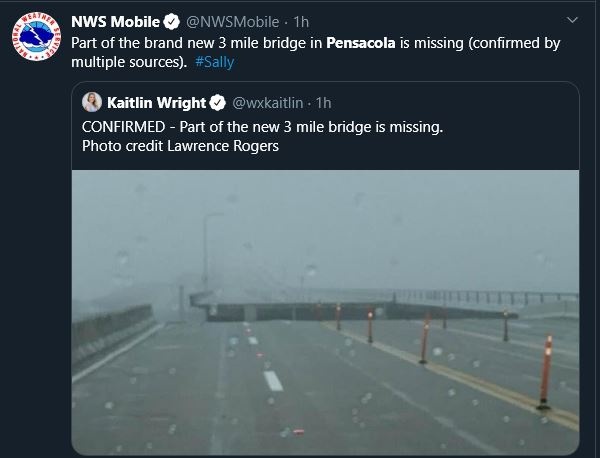 Picking all my peppers tomorrow as well. I hope that the forecast holds because it shows some beautiful weather next week back up into the 70s for a couple of days and plenty of sunshine.

Just looking at around here, it looks very warm (for time of year) starting about midweek next week and then continuing for a solid 5-7 days…probably 80F to 85F ish… Only solid is this time of year the nights are getting long so it should cool off nicely every night.

Another GOM cane and another Bermuda cane next week…

1 Killed in Alabama as Sally Pushes Inland; National Guard Called in to Assist in Florida

The death of a man in Orange Beach, Alabama, was blamed on Sally.

Hundreds of people have been rescued in Florida and Alabama, local authorities said.

A section of the Pensacola Bay Bridge in Florida collapsed.

More than 2 feet of rain fell in Pensacola.

More than 500,000 homes and businesses were left without power.

Last week of Sept into early Oct looks awfully warm in the N central plains. Probably some record heat. No real cold anywhere in the country. Most of the cold is over W Europe. 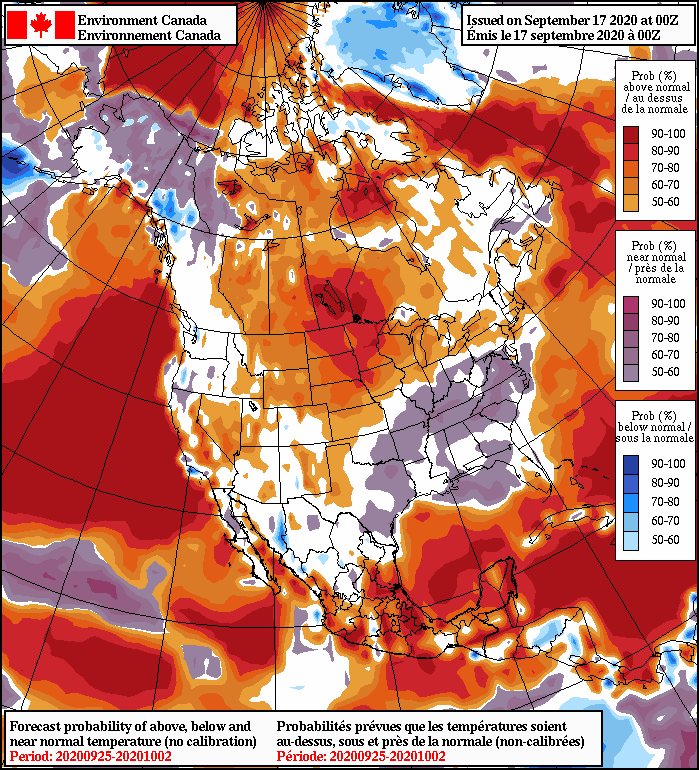 46F here overnight… Going to have to start moving plants inside the next few nights.

Is very smoky here. Puget Sound region
Still getting up to the mid 70s.
Mostly dry.

WOW! Did you saw how this bridge got with Hurricane Sally?

Cloud monster moved back in this afternoon…temp stuck in the low 60Fs.

Frost watches out just east of here. Local is calling for 41F. I’ll have to do the plant shuffle once we lose this light. Freeze watches far north.

same here for the next 3 nights then a warm up. lows forecasted in the upper 20’s.