How long did it take your hardy kiwis to fruit?

It still should work as a pollinater since it pollinated itself

Self-fruitful females are parthenocarpic, and do not produce viable pollen, so cannot pollinize other females.

I have 4 kiwi on the trellis. One is an Issai that I rescued from a shady spot, it is about 3 years old with no flowers. The one that flowered was labeled as a male pollinator. The male came in a shipment with a Ken’s red and Ananasnaya. Would anyone be able to identify these by pictures without flowers or fruit? I’ll post some in a bit…maybe someone can help me out.

This is my 3 or 4 year Issai. Pretty confident on this ID. 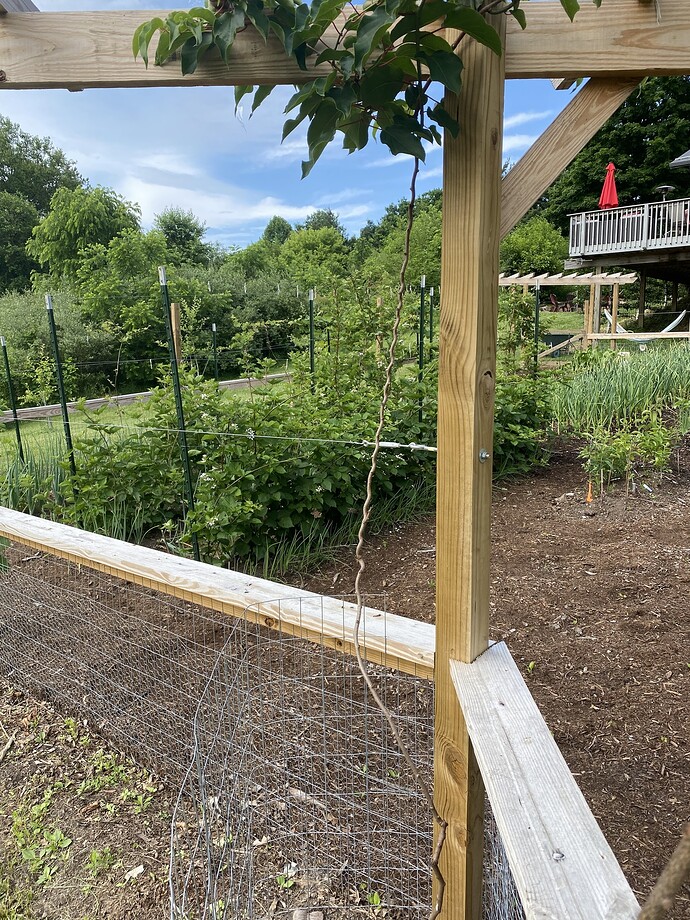 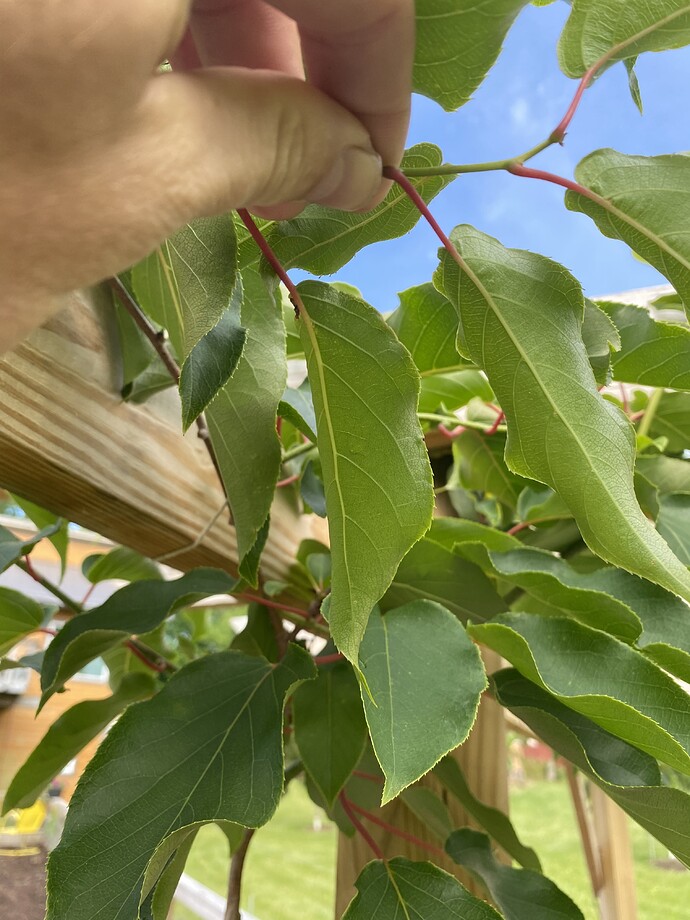 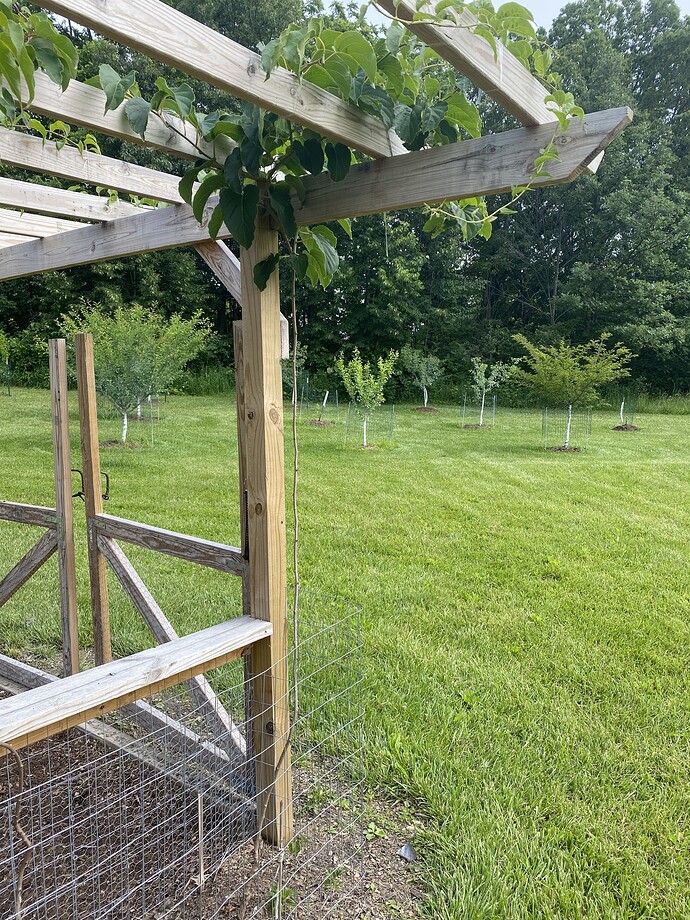 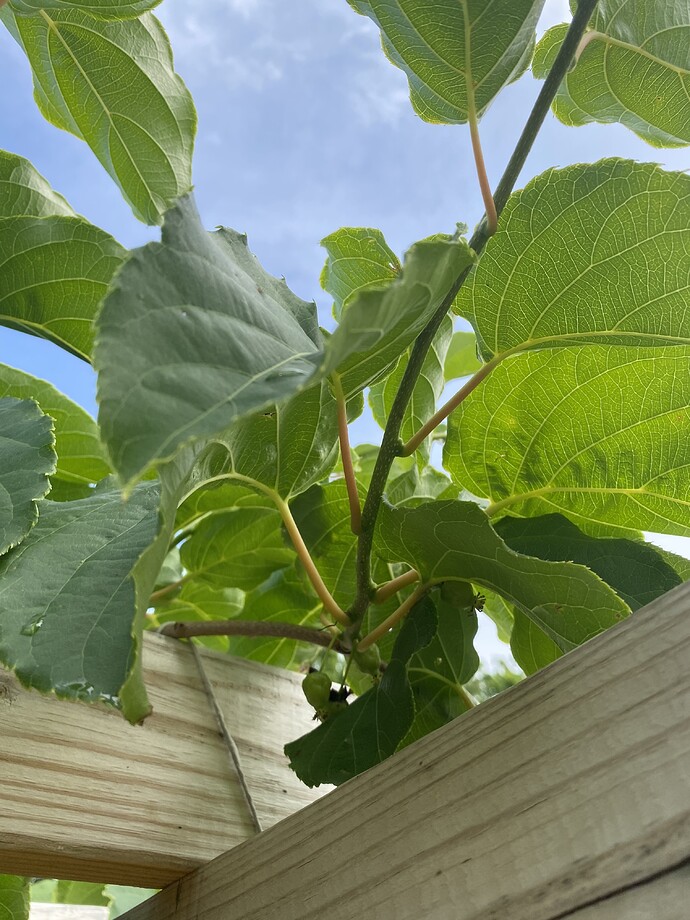 This is supposed to be a second year Ken’s red 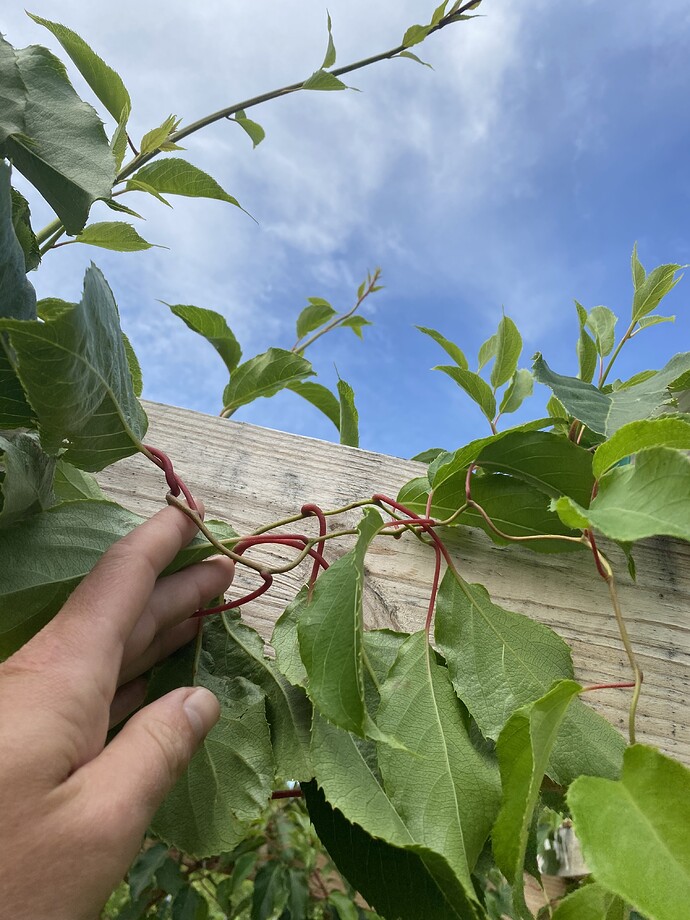 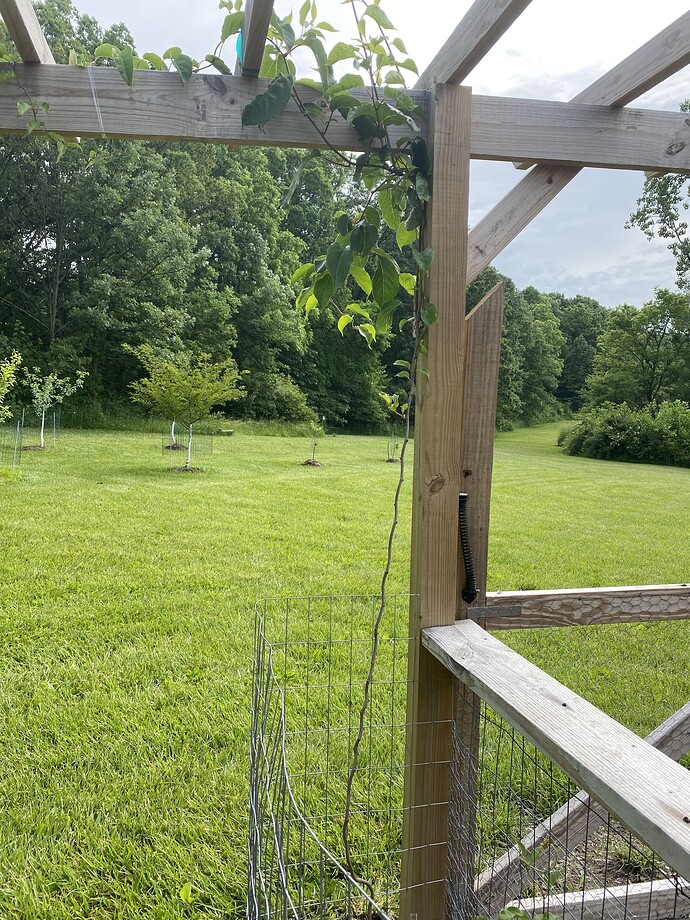 This is supposed to be a second year ananasnaya 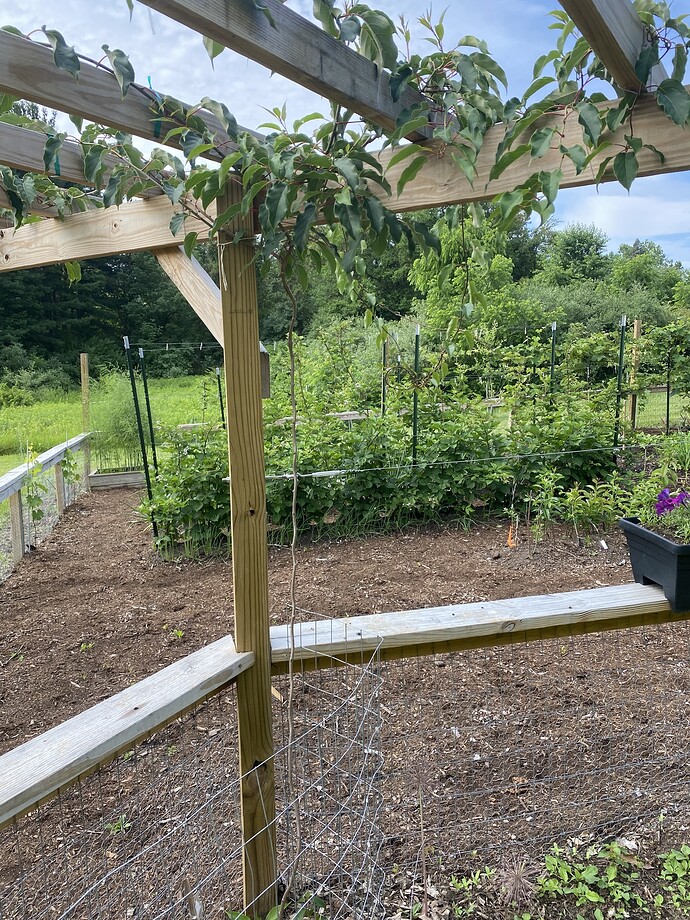 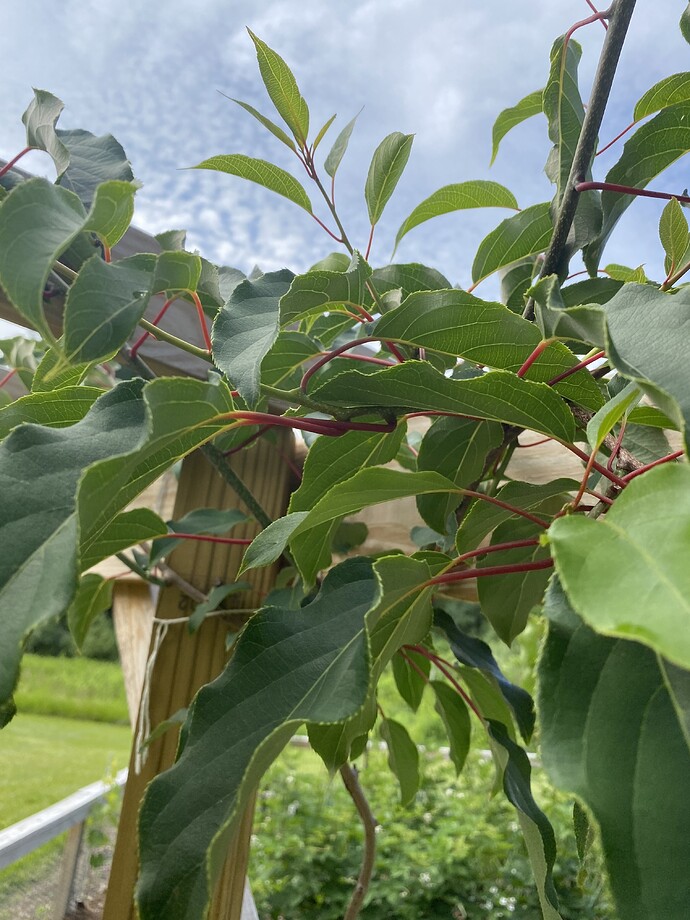 Thanks for the correction I’m sure that’s true for my Issai.

Prolific (aka 119-40b) is stated as being able to pollinate females though I haven’t dug into the literature. Do you think or know this isn’t true?

This is my 3 or 4 year Issai. Pretty confident on this ID.

There are two different genotypes in the nursery trade sold as Issai. Both have green petioles. Your “Issai” vine pictured has reddish petioles, so not Issai. The vine that did set fruit appears to have some pinkish coloration in the petioles in these pictures, so I’m now not sure that is Issai either. I have both the 4x and 6x versions of Issai that I’m very certain of, and neither has any noticeable red pigments in the petioles.

Kens Red does have very red petioles, so your KR vine looks like it could be correct.

Do you think or know this isn’t true?

Not true either. There are no actual self-fertile argutas in the trade anywhere, as far as I know. I have tested pollen from Issai (both versions) and 119-40B, and neither produced viable pollen.

A few really rare fuzzy kiwi female sports with viable pollen have appeared in vineyards or breeding programs in New Zealand, but no self-fertile versions were ever released.

The genes controlling sex determination in Actinidia have been identified. They are tightly linked on the same “Y” chromosome. The gene called “Friendly Boy” (FrBy) is not functional in females (so pollen aborts), and another gene called “Shy Girl” (SyGI) blocks ovary development in males, which have a functional Friendly Boy gene. It is now possible to insert a functional Friendly Boy gene into any female Actinidia, and get real self-fertility, but not sure this will happen any time soon due to public resistance to GMO technology.

A new species of Actinidia was discovered a few years ago in southern Japan, that has only female-type flowers. These produce viable pollen and the species is a true hermaphrodite (and tetraploid). They were crossed with yellow kiwi and offspring were self-fertile, so self-fertile non-GMO varieties may become the norm sometime in the future. It may be a long time before it’s transferred into hardy kiwi, which are not very economically important compared to A. chinensis.

A few really rare fuzzy kiwi female sports with viable pollen have appeared in vineyards or breeding programs in New Zealand, but no self-fertile versions were ever released.

Whats the story on Jenny (fuzzy)? I have a male/female pair, but was going to add it as a back up. They claim it’s self-fertile.

What I thought was Issai, was a gift from a big box farm store. The little tiny vines in a cardboard box not much bigger than liter water bottle. I’ve checked the store out and they supposedly only sell Issai. My kiwi plans are all messed up now. Mainly by not having a male planted.

Often times when you buy hardy kiwi from big box stores they give you a male and female in the same pot. Do you remember if any of them had more than one stem coming out of the dirt? If you have issai you should still fruit well regardless, so it will give you fruit while you wait if you do need a male for the others.

Whats the story on Jenny (fuzzy)?

I’ve never grown Jenny, but I have read that it’s also a parthenocarpic female.

I’m sure it is a matter of me being crappy at pruning these monsters (Anna x 4, male x 2, Jumbo (Michigan State) x1)

Anyone got a good clear primer on proper pruning of these monsters? (mine are all at least 6 years old and the Annas and males are over 10 years old).

Monsters? I made a 40 foot walk under trellis. Now it is a 40 foot cave that I let get wildly out of control.

Incredible info there! Thank you very much for sharing

Thank you very much for sharing

To address the topic of this discussion plus some non-argutas for comparison:

Container grown Issai (both 4x and 6x versions), and Flowercloud male (offspring of 4x Issai), all bloomed the following spring for me, as did several kolomiktas, all in 3-5 gallon pots.

Kens Red (in ground) bloomed in it’s third spring. Prolific and Meyers Cordifolia in their 4th. MSU never bloomed for me. I think it’s still on the property, and not sure that it has ever bloomed in 15 years, even though it’s huge.

A couple of seedling A. chinensis males (from Hort16A fruit) bloomed 18 months from seed, and female seedlings mostly one year later. Seedlings from an A. deliciosa ‘Qinmei’ fruit from China bloomed in 3rd or 4th year for males and 4th or 5th for females. These turned out to have a 2x A. chinensis pollen parent, and to my surprise, were all tetraploid.

A. kolomikta x A. chinensis (2x) seedlings bloomed in year 2 in 3-gallon containers (all 5 were male and sterile).

Had one hardy kiwi seedling, Chang Bai Giant x unknown arguta male, bloom quickly for someone else when grafted to a mature rootstock, and the original in ground seedling took about 6 or 7? years. It is female. A large clone of it in a container still has not bloomed.

Hardy kiwi (except for the Issai clan) seem to be much less precocious than fuzzy/yellow or Arctic kiwis, and seedlings can take a really long time. If you try to grow from seed, grafting to mature rootstock is definitely the way to go.