I will see what Cliff willing to let me trial some of his new varieties to test them out and report the result to him since I am in Zone 5A and his is 6A.

I hope I didn’t give the impression that extra hardiness was anything to scoff at; obviously that’s a big deal.

I mostly find it interesting that the flavor inheritance seems so one-sided. I’ve only experienced fuyu-type persimmons myself, but from what I’ve read, most people seem think that the American flavor is more “complex.” It sounds like none of that is carrying over into the hybrids, though. I wonder why?

I found this video about the town in Austria where one of Cliff’s new kaki persimmons comes from: Steiermark. It’s in German. The video basically shows a tree outside a church and then a small orchard where they’re testing out the tree for larger production. One thing I noticed is that the persimmons in this video don’t look like Steiermark picture Tony posted above. These look more like non-astringents.

On that video it stated that tree was D. Virginiana. Just an American Persimmon and not an Asian Persimmon. The tree Cliff is selling :“Steiermark - So named after a town in Austrian Alps, a large tree growing in an open pasture near the town… No one really knows how this excellent persimmon came to be in existence, just that it has been there for the past 50 years or so. Repeated events of sub-freezing temperatures below zero and down to minus -16 here in Kentucky, with barely noticeable twig damage, have made it a reliable grower and producer here.” 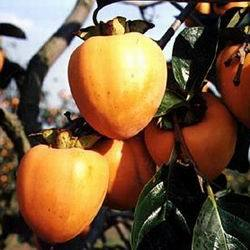 The first one they show is D. virg, the others are kaki. Either way, it’s exciting Cliff is offering cold hardy kakis. I ordered both of his selections for fall delivery to see how they’ll do this winter.

Very good that we have the chance to trial out some of these cold hardy Kakis. I have a bunch of holes to dig this fall in advance. In the Spring, I don’t have to deal with frozen ground and plant them early.

Cool video. Yes they do seem to look more like non-astringents, but it is hard to tell. Hopefully they are!
Someone needs to get ahold of that Chinebuli. I didn’t see it on Cliff’s website.

Can anyone provide scion wood? I have a few young American plants and a few Asian, Ruby, Yates, H-118, etc. I am in Georgia and will cut scion wood in late January 2016. Hope to find source of some hybrid persimmon in time for 2016 grafting,

Doing some pondering on this rainy day and looking over the initial set of pictures. If I’m reading the crosses correctly, it looks like either American or Kaki can be back crossed with a hybrid persimmon? That’s pretty fascinating!

Tony, do you have any further info on Chinebuli besides it being from Northern China and remarkably hardy? I see the picture you posted is fruit from Bulgaria. The only information online I could find was a sentence from a research article indicating it was one of the best persimmon varieties being grown in the soviet state of Georgia in the mid-70’s.

That was all I know about the Chinebuli from Cliff. I ordered one from him for Spring planting. I will see if it can handle the Z5 cold. Just for insurance, I will bury the graft union a foot deep into the ground. If the top die due to a harsh Winter then the re sprout will be the Chinebuli and not the American persimmon rootstock.

I did some searching and found a Russian website with a blurb on Chinebuli here: Сорта хурмы

I ran it through a couple translators online and came up with this.:
Chinebuli – It is excellent, Dzhiro (Jiro?), delicious – at the (nursery/farm?). Tree is not big on height. Taste of the fruits of this persimmon is (non-astringent?). The harvest is higher and more stable in the presence of pollinating varieties. The fruits ripen late, are shaped like a flattened oval with 4 sides, orange, weighing 56-210 grams. The most interesting, as a grade for room culture of a persimmon (as a variety for container culture?). With thorough cleaning, the fruit can be stored in a cool place for almost a month. Handles frost to -16 degrees (unknown if Celsius or Fahrenheit). Disease resistance is good.

I am friends with Cliff England on facebook and he has commented that after trialling 100 varieties of kaki persimmons that is his #1 recommendation (for his climate, I presume).

He also posted this on GW last November: “Last winter was a very hard one for us as the winter temps reach minus 23.4 Celsius or -11 degrees F and we lost 268 grafted Kaki trees there are some survivors like Korea Kaki, Inchon, Vaniglia, , CHinibel, Miss Kim, Shan Xi, Orest, and Chibacha that had not winter injury at all.” I think he uses Chinibel and Chinebuli interchangeably, also saw Jenny Bell as an Anglicized name.

Ampersand, in general it is translated correctly.
I can translate it again.

“Chinebuli persimmon, also called Excellent, Jiro or Delicious. The tree is not very tall. The taste of fruits is not astringent. The harvest is higher and more consistent if pollinators are present. The fruits ripen late, the shape is oblate-oval with four lobes, orange, weighting 56-210 grams. This variety is mostly usable for the indoor growing. If picked correctly it can be stored for almost a month in a cool place. It is winter hardy to -16 degrees (yes, Celsius not Fahrenheit). It has good disease resistance.”

I looked around in the Russian speaking internet. There is a little information about Chinebuli. It is grown mainly in Georgia and it is not astringent. It is not winter hardy for the Russian southern lands. This is why Chinebuli is recommended for the growing indoors. I remember that I read discussions about growing persimmons on the Russian garden forum. They were talking about Jiro persimmon. They wrote about their progress of growing it and that when it got tall enough and could not be protected during the winter, it froze.

I myself lived far north where persimmons could not grow, so I had no experience with them, other than enjoying eating them from the grocery store.

Thanks for the translation. I am looking forward to grow this Chinebuli (non-astringent Kaki persimmon next Spring).

Me too! Cliff had one left I ordered.

Thanks Phil for the update on NG. Jack was hoping they would drop readily when ripened for the deer to feed on.

Yes, I have heard conflicting reports on NG with regard to fruit drop. Some folks that have them say the drop and others say they don’t. I don’t know if it is an environment related thing or if there is more than one tree that is being promulgated under the name Nikita’s Gift.

Maybe not as cold hardy as hoped. My Kasandra persimmon didn’t survive the winter – it died to below the graft. I also lost my Korea Kaki and Steiermark Kaki, both said to be cold hardy to at least -16. My lowest temp was -12. Others that died: Saijo, Sheng, Smith’s Best, Patapasco. Survivors: Tam Kam, Nikita’s Gift, Rosseyanka, all the americans, and several of my own hybrids. I think some of the more cold hardy persimmons died because of the capriciousness of this winter. I’ll probably try Korea Kaki, Steiermark, and Kasandra again.

SMC,
So sorry to here you have so many losses. Your experience would give me pause in planting more hybrid or Asian persimmon without protection.

My NG survived its first winter because of the protection. To think that I have to do it every winter is not appealing to me.

That was unfortunate news. Cliff England sent the Chinebuli, Cassandra, and JT-02 last November. I potted them up and over Winter them in the tornado shelter. I planted them in ground at the end of March. Cassandra and JT-02 leafed out nicely but the Chinebuli still green but in a dormant mode yet. I will wrap these guys up and hang a light bulb for their first Winter to get them established then hopefully they will be harden up the following year.